My concussion headache is especially bad one Friday, that feeling of having been hit upside the head with a baseball bat around the back of my head, in the same place we’re shown Julius Caesar regularly wore a crown of leaves. Instead of staying inside, I force myself out of bed, wincing and squinting as I shove my body into first jeans then shoes then a jacket, flinging sunglasses onto my face. I go get coffee, which I’m not entirely sure I’m supposed to be drinking, and walk to the park near my house. The sky is a clear blue, a gorgeous day for people who can open their eyes without pain, who can walk their dogs along the sunny path by the river without fear of crumpling to the ground. The air has a crisp chill, warm enough to wear a coat open with a t-shirt. I find a bench to sit on, casually perusing their nameplates because occasionally you find a really sassy one that’s just gold. The one I ultimately choose to sit on is dedicated to a lady named Ruth Zimmerman--just a nice memorial, no shade.


My headache slowly begins to dissolve as I sip my coffee and stare at the water. But after I am seated for a few minutes, an older gentleman comes over. He’s perusing the labels too, a book in his hand, tweed jacket on his back, silver-rimmed spectacles on his eyes. His white hair is gently moved by the breeze.


“Excuse me,” he says politely. “Do you mind if I look at this bench?”


People have asked me weirder things in New York, so no, I don’t mind. I get up so he can see it. He looks at the nameplate.


“This was my wife,” he says. “She died recently. My daughter got this for her.”
“Oh, I’m so sorry,” I say, instinctively patting his shoulder. I really need to stop doing that to strangers.
“Do you mind if I sit here?” he says. There’s a small drop of water hanging from the tip of his nose as if he’d been crying. Of course I don’t mind, and I move to another bench nearby.


The man sits with his book in his lap for a while and moves to the left of the bench as if leaving the nameplate exposed so Ruth can sit next to him. He stares at the water and breathes, a sharp intake of air every so often.


On Friday evenings, the Morgan Library is open free to the public. They have an exhibition on of photographer Peter Hujar’s work from throughout his career and I am looking forward to seeing it. There is something I’ve always loved about his photographs, how even pictures of babies have darkness and depth and mournful soul to them, their creamy black and white contrasts illuminating just the right details, just the right shadows on every subject. Many of his images are centered, I notice, as if he never cared for unusual angles or focal points, just the subject as it was, almost a blend of documentary and portraiture--here is this thing, centered, exactly as I see it, without frill.


There’s a Susan Sontag quote on the wall. “The ultimate wisdom of the photographed image is to say: ‘There is the surface. Now, think--or, rather, feel, intuit--what is beyond it, what the reality must be like if it looks this way.’ Strictly speaking, there is never any understanding in a photograph, but only an invitation to fantasy and speculation.” Veins snake outward ominously from legs, reclining figures invite you into their bedrooms, tattoos belie other lives outside the lens. They are transportive and intimate, full of grace.


Hujar, I learn, was inspired by “those who wore their otherness on the outside,” people who were unapologetically themselves, especially those in the downtown New York arts scene of the 1970s. I’ve been asked to explain my own work recently and my own descriptions of it are the same. I wonder if this is why I’ve always been so drawn to his images, their chronicling of lives so different from Hujar’s own, so beautiful in their defiance of norms: specifically, as the exhibition quotes Hujar, “those who push themselves to any extreme” and “cling to the freedom to be themselves.” He was “a connoisseur of life as a performance--and an artist who believed his medium could expose realities behind the surfaces of the world.” There are moments when someone’s description of their own work grabs a hold of your heart and refuses to unlatch itself. This was one of those.


Hujar’s images are a history of the time, this intersection of art and gender and culture at what is arguably one of the most culturally heightened, prolific times in the city during the last century. They are a history of art and life, of sex and death.


Outside of the exhibition, there’s a chronology of Hujar’s much too short time on this earth. It’s strange how such a display of someone’s life reduces it to a series of bullet points.


I leave the Morgan and my head starts hurting again. The night air has dropped a few degrees from the daytime, and I button up my coat. My brain seeks out a hamburger and french fries, a rather unusual request from said source, so I decide to honor it. My legs carry me to Joe Junior, an iconic, classic New York diner on 17th Street and 3rd Avenue, taking me down Park Avenue on the way there. Wind softly whips into my cheeks. I’ve never been to Joe Junior, but I’ve heard tell of their excellent hamburgers. Sidling up to their lunch counter--it’s one of my favorite ways to sit in a restaurant these days--I admire the mirror and wood-panel walls that scream of the 1970s, the short blush stools, the beige wraparound counter, the old rusting cash register with real buttons you can press with your real fingers. I order a patty melt please, medium on whole wheat with swiss cheese, sauteed onions and mushrooms. Biting into it, the toast is crispy and buttery, the meat juicy, the onions sweet. My headache has dissipated again and it might return, but for now my other senses are gratefully distracted.

Posted by miss-manhattan at 2:52 PM No comments:

When Shannon Deep asks me to go to the theatre, I always say yes. Not just because she is a beloved friend of nearly 12 years, but because she is a theatre person--one who is passionate and knowledgeable and practiced in work that appears on the stage.

For several years, Shannon worked as a freelance dramaturg, and in that time also became a Script Reader for the Roundabout Theatre Company, responsible for evaluating scripts for potential development and production. But she also morphed those interests into a new career in communication strategy, brand strategy, and copywriting that she also loves. Currently, she is the Senior Copywriter and Communication Strategist at Dashlane, a startup dedicated to protecting digital passwords and finances.

In her spare time, Shannon is also the co-host of the podcast Song Salad with our friend Scott. Song Salad is a delightful “edutainment” podcast where she and Scott write and perform a song every week based on random genres of music and topics generated by their “salad spinner of fate.” One of the many fabulous things about Shannon is that she has kept her interests alive and well since I’ve known her, constantly forming them into new spheres of experience for herself and those around her.

Tonight, that experience is seeing Tom Stoppard’s “Travesties” at the American Airlines Theatre in Times Square. Shannon has been given tickets by Roundabout and been kind enough to invite me along. I have been delighted to accompany her to several Roundabout shows over the years, each one a positive experience. But while I have read Stoppard’s plays before, I have never seen a show of his onstage--it will be a workout, Shannon tells me, but I look forward to exercising my brain. We meet at the theatre early and instantly decide to leave because it’s in the middle of 42nd Street in Times Square, a rapacious capitalist hellhole if there ever was one, plus it’s seething with tourists. Instead, we toddle up the street (rather, I toddle because I am in heels) to a bar and Shannon orders a piña colada. She is wearing what she calls her “art director outfit,” chic black culottes with a minimalist white shirt of clean lines and yellow flats. We gossip, she brushes her hair, I take pictures--“This is good because I really do brush my hair in bars,” she laughs.

Soon we will head back over to “Travesties,” and I will not-so-covertly take more pictures in the theatre even though I’m definitely not allowed to do that. Shannon tells me about another podcast she contributed to recently, for which she wrote a 25-page script about Mark Twain. It’s not something she’d do again, she says, but it’s cool how she continues to branch out. The play begins and at first it’s slow but soon we are both laughing like crazy. In intermission I try to take more pictures by crouching in the aisle. “You’re insane,” Shannon says, laughing. But really, she’s known that all along. 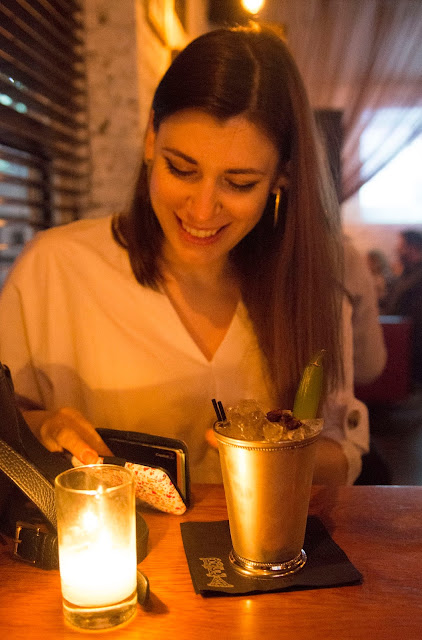 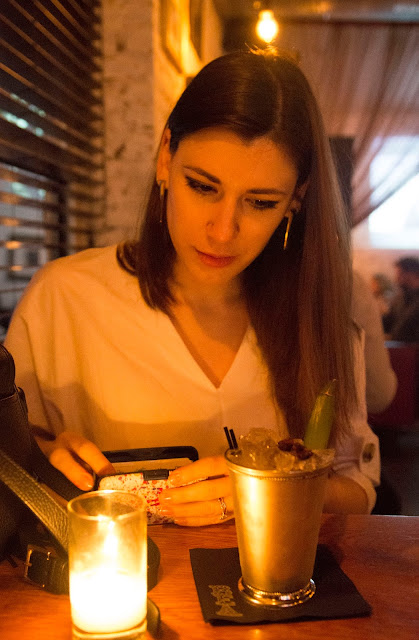 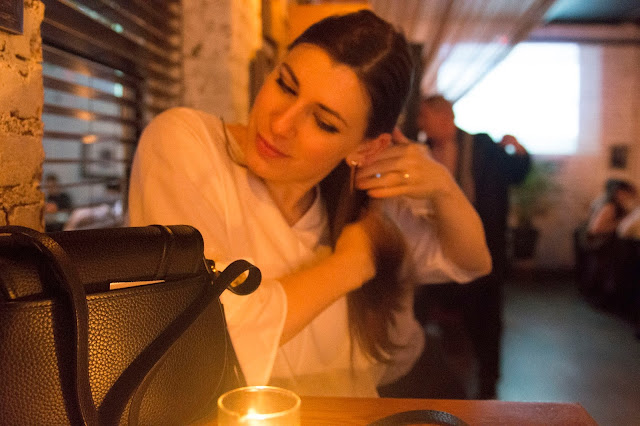 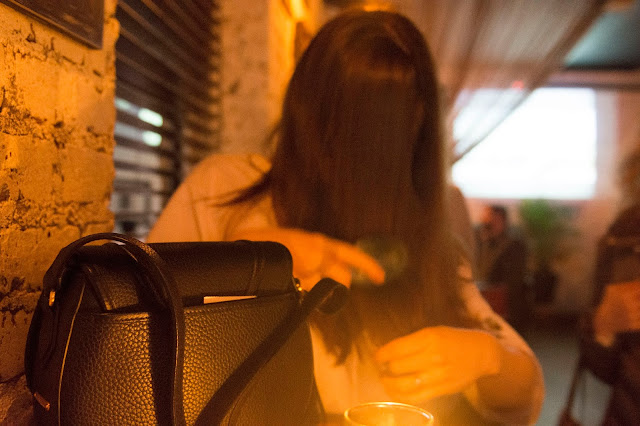 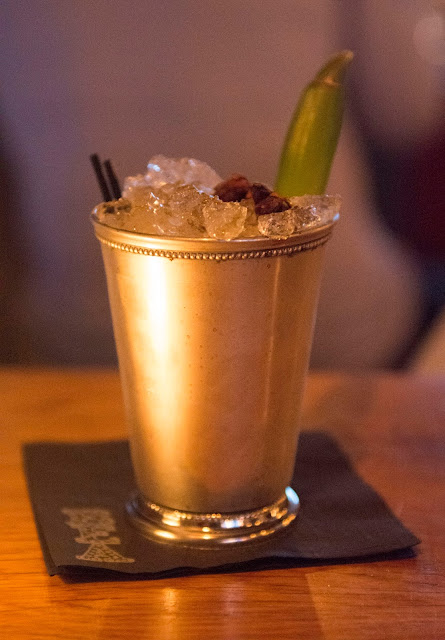 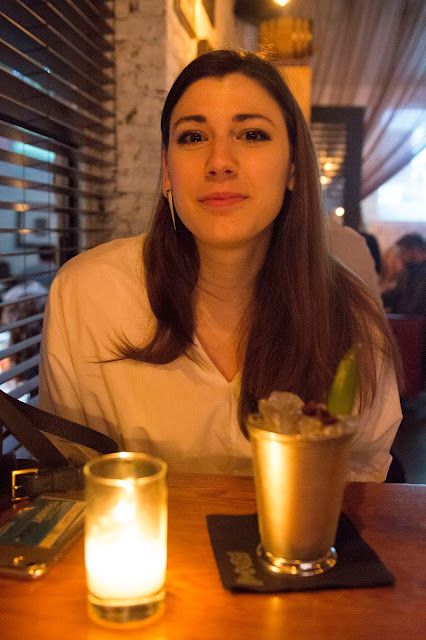 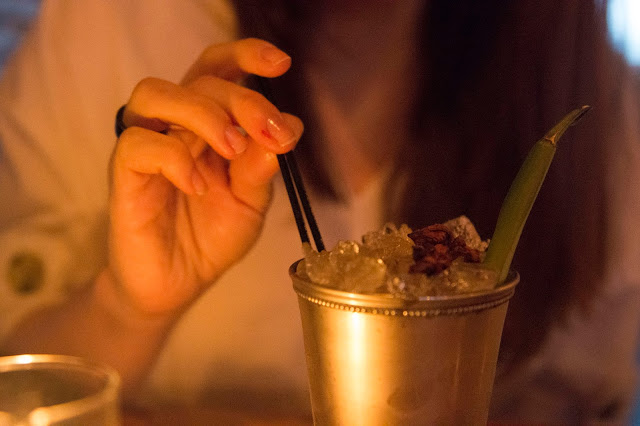 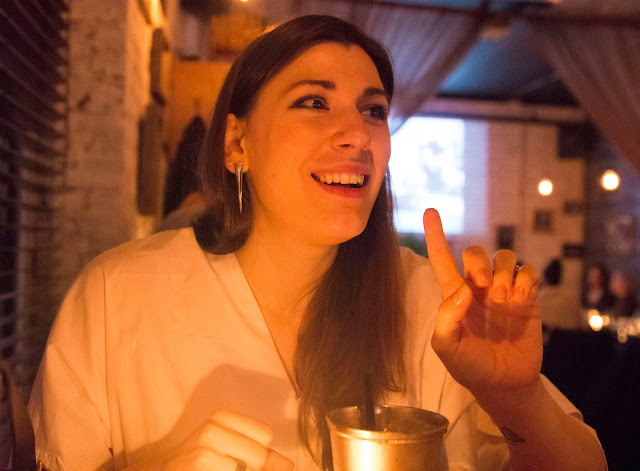 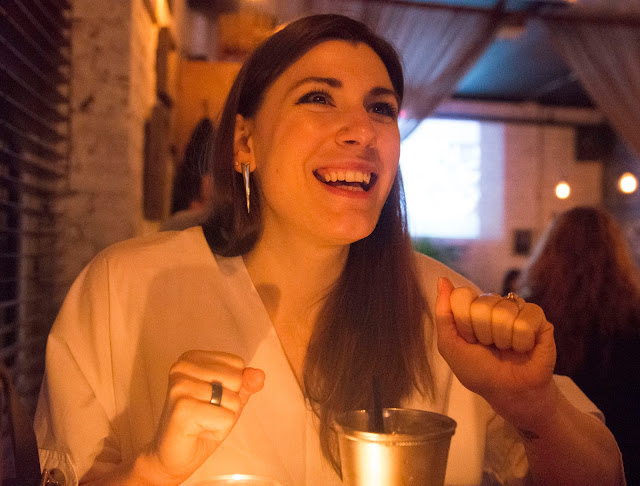 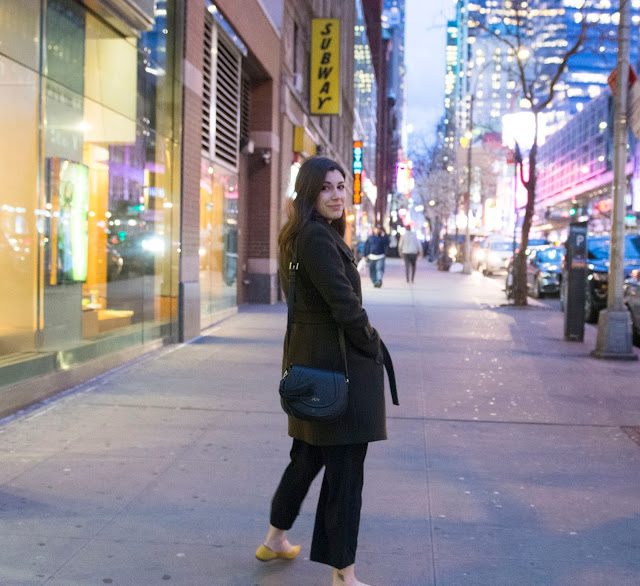 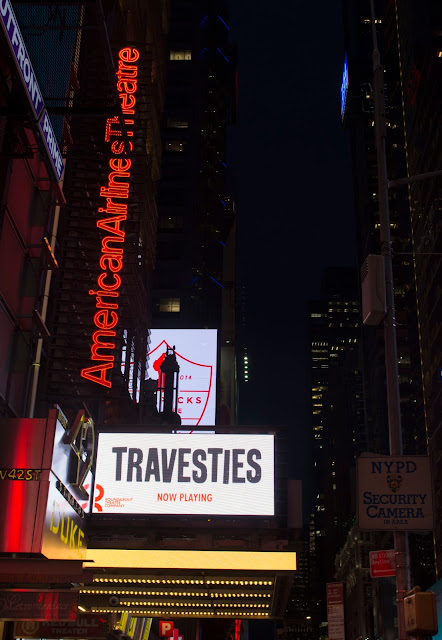 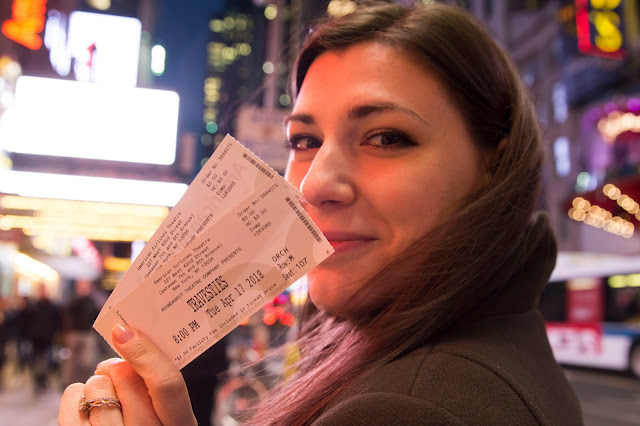 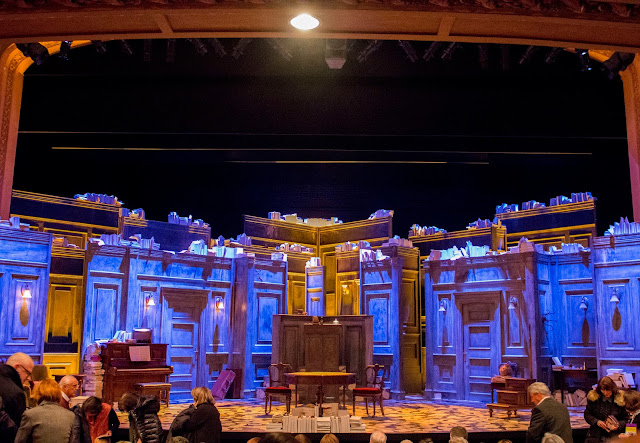 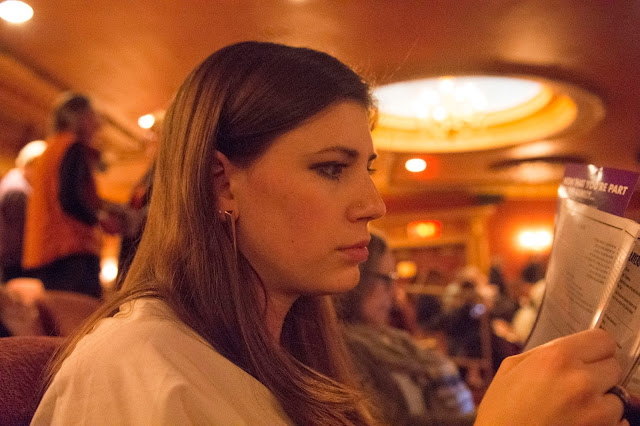 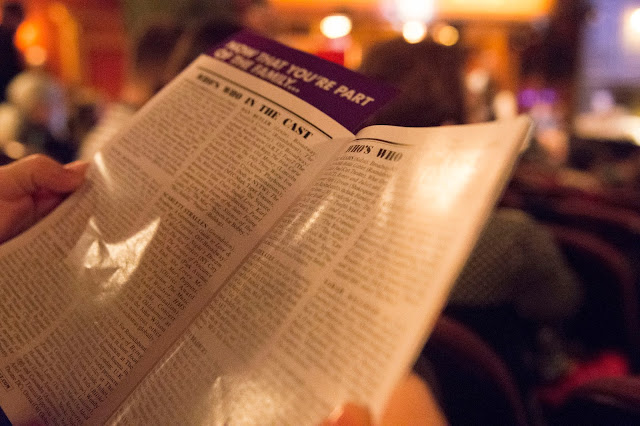 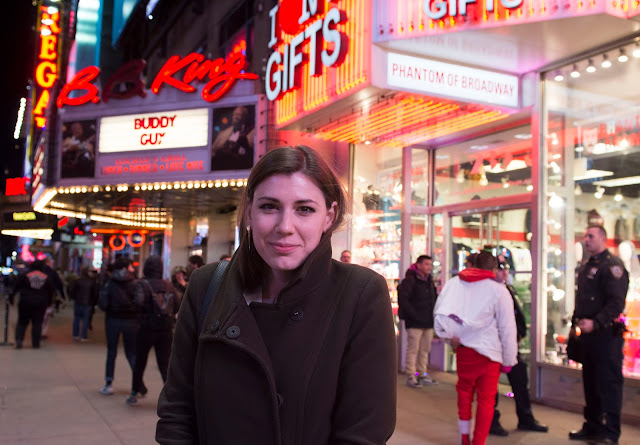 Posted by miss-manhattan at 1:08 PM No comments: