Of late, Miss Manhattan has ventured not once, but twice into Brooklyn! It’s about time, since I’ve been in New York seven and a half months. I guess I just never got around to it—you can’t just say, oh, I’m going to do Brooklyn today! It’s an entire borough, just like Manhattan. I always felt like I needed a specific reason to go, and I never had one until recently.

My most recent trip to Brooklyn was with TDS, to Williamsburg. I had never been to this exotic locale before, and had only heard the most…interesting things about it. In short, Williamsburg is where, historically, the hipsters live. As TDS and I left L train on the Bedford Avenue stop, we knew we were on a different planet. For the most part, here is what I saw, as far as people went:
·         Beards
·         Flannel
·         Black, thickly framed glasses
·         Girls with platinum blonde hair dyed silver
·         Skinny jeans
·         Beanies
Oh, and more beards.
As we walked down Bedford Ave to get to the Brooklyn Art Library, home of The Sketchbook Project (a nationwide project where people filled Moleskine notebooks with collages, sketches, writing and other cool stuff and donated it to this project…more below), we noticed how different a planet we were on. Where in Manhattan street vendors peddle wares like faux leather handbags, bongs, and books by the African-American erotica author Zane, in Williamsburg they sell architecture coffee table books and vinyl records. Tasti D-Lite, a low-cal ice cream and frozen yogurt franchise, sells crepes. There is a strange disconnect between the look of the residents and the specific, dare I say upscale retail options. As if it’s not cool to like things like crepes unless everything else about you suggests you wouldn’t be caught dead eating one. Insert comments relating to bourgeoisie and/or elitism here.
What I’ve been told about Williamsburg by people who live in Greenpoint, the next-closest neighborhood, is that you can be close to all the bars without having to live near the people who frequent them. The people who frequent them are, and please excuse me for the now far-overused term, the aforementioned hipsters, people who are so into their own coolness but will tell you unequivocally that being into your own coolness is supremely uncool. This brings us to irony, another hipster construct—i.e., dressing like a lumberjack, which one would normally think supremely uncool, is now cool just because it’s uncool. It’s a twisted web, difficult to explain, especially since I’ve now used the word cool far too many times. Actually, here’s something really great that will describe it far better than I ever could:
Normally, the things I saw in Williamsburg I would think were awesome if I saw them in Manhattan, or anywhere else for that matter—vinyl vendors, awesome used books a la the Strand bookstore, a store dedicated entirely to muffins, and a moving truck full of musicians just rocking out down the street with the back of the truck open—but in Williamsburg I thought they were absolutely the most annoying things I’ve seen in my entire life. Everything exists in this ironic purgatory where cool and uncool cancel each other out, leaving one feeling only annoyance because they just can’t feel anything. 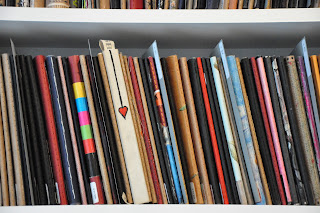 There were some things I actually liked in Williamsburg, despite these feelings. TDS and I made our way to the Brooklyn Art Library, an art cooperative set up to house the Sketchbook Project among other art-related events. There was an entire wall covered in shelves upon shelves of these aforementioned Moleskines, from all over the country and the world. I looked at one that was made up of collages of Wyoming and another full of drawings from an illustrator in Hawaii. The project was really neat, and I thought it was a great way to bring art together from all around the world that people could actually hold and touch and not just look at on the wall. You’d be surprised how many different things people can fill a simple notebook with if you just say, “Ready? Go.” The project will be touring all around the country soon, and you can check it out here. 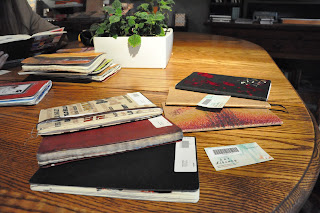 And then I tried to buy an old wax pencil they had for sale. On the pencil it said 29 cents, so if it wasn’t exactly that I figured it would be like a dollar, taking the “cool oldness” factor into account. I went to up to the waifish cashier with a single braid across her forehead and found that one pencil was, in fact, six dollars. Incredulous, I tried to clarify. “Yeah, it’s vintage…” she said, her voice trailing off. I had been in Williamsburg only a short while and already it had not failed to live up to my expectations. 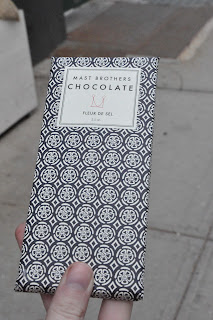 The other thing I really liked about Williamsburg was this gourmet chocolate shop called Mast Brothers. Mast Brothers handcrafts each and every chocolate bar they sell in the store, and it certainly smells that way when you walk in. It was like inhaling dark chocolate powder, and I almost felt like it got in my nose and my eyes. The chocolate is ground and roasted in the store and made into the bars without any extra oil, butter, or anything. 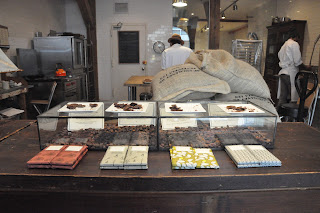 There are a number of flavors as well, including but not limited to Serrano Pepper, Hazelnuts, and Fleur de Sel. TDS and I purchased the latter (we split the cost of $7, figuring it was worth it after sampling the cocoa goodness in the store…we were right.) and were instantly floating on some kind of chocolaty air. Fleur de Sel is chocolate flavored with sea salt, and each grain of salt pops on your tongue as it mixes with the swirling darkness of the chocolate. Though I am not even a chocolate person, I was instantly swept off my feet by this chocolate bar. I also found out that it was voted “Best New American Chocolate” by Food & Wine magazine. Crazy! Mast Brothers sell their chocolate all across the New York area, but they also have a select amount of places they sell elsewhere so I definitely recommend finding it if you’re interested.


Overall, the trip to Williamsburg was an interesting one, full of irony and coolness. Yeah, I said it. Would I live there? Not if you paid me. Would I go back again? I’d have to have a reason. But it was certainly an experience. Here is a picture I took that I feel best exemplifies Williamsburg: cigarettes (Newports, because they’re the cheapest) and bicycles (because who the fuck wants to buy a MetroCard and become a part of the machine?) littering a streetcorner. 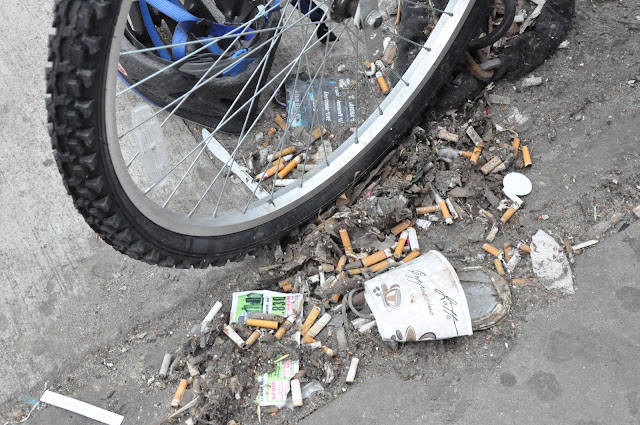 Posted by miss-manhattan at 3:11 PM No comments: