“Come to Queeeeeeeeeeens,” said The Brilliant Wong (henceforth referred to as TBW).
Having just moved back to his native borough, TBW had come to play in Manhattan many times, and now it was my turn to make a trip. But what should we do when I got there?
I knew almost nothing about Queens. I knew that the trains went above ground to get there.  I knew if I looked across the East River I could see it. I knew that my mother was born in Forest Hills, which I had visited once before. While there, my mom and I went to the T-Bone Diner on Queens Boulevard because I liked its neon lights. I had also recently been to Astoria for the first time to visit HL. But I knew one thing we’d be able to do, because it’s something you can do no matter where you are in the five boroughs: eat.
I set my challenge forth to TBW who once, after being asked what his favorite places are in New York, simply responded, “Food.”
“What kind of food do you want?” he said.
“What kind is there?”
“Pick a country.”
Oh, the joys of living in New York.
But since I’ve moved here, and pardon me if I’ve written this already, I had yet to experience this amazing Chinese food New York is supposed to have. I really wanted to be blown away by deliciousness. Or at least something different. Where could we go for that, TBW?
“Flushing,” he said, without pause. And then he offered the best response ever to the Chinese food question. “From what city?”
There are only so many parts of the U.S. where you have a choice of exactly what city in China from which you would like to experience the cuisine. My native South Florida is certainly not one of them. Oh, the joys of living in New York yet again. I picked Shanghai, mostly just because I felt like it. TBW instantly knew a place. “Take the 7 train to the last stop in Queens,” he said, and the next day at 6:30 we’d meet on the corner of Roosevelt Avenue and Main Street in Flushing.
When I stepped out of the train station in Flushing, I had no idea what was coming. My adventures in Manhattan’s Chinatown paled in comparison to the banks, post offices, laundromats, and even Popeye’s chicken storefronts that now stared at me across the street, all imprinted with Chinese characters. “Yeah, in Manhattan it’s tourist Chinatown. This is real Chinatown,” TBW said later when he met me on the corner. 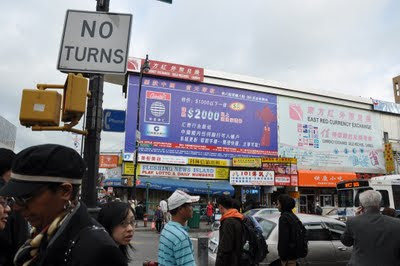 In 2009, New York Times writer Kirk Semple wrote that Flushing “rivals Chinatown as a center of Chinese-American business and political might, as well as culture and cuisine.” And that was two years ago, so I can only imagine how it’s grown since. The center of Flushing, where the 7 train lets off, is also the center of the city’s Asian community, home to not only many Chinese but also Korean and Vietnamese establishments. 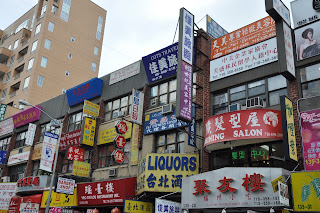 We walked to the restaurant and I stared at everything, wide-eyed: legumes and ginger for sale by the pound in storefronts, pastel pink bubble teas, neon plastic toys. The short trek down the street was a parade of visuals I wasn’t used to, especially the street covered with signage in a language I didn’t understand.
We arrived at Taste of Shanghai (Shang Hai Xiao Chi) and found a table up the stairs. We were served what we decided was rice tea (delicious) and then picked out a bunch of dishes to share. There was Drunk Chicken, served cold and marinated in an alcoholic beverage of some kind, that came off the bone in piecey little shreds; cold sliced beef lightly marbled with fat that reminded me of a thicker, tangier pastrami; a plateful of quarter-sized rice cakes; and soup dumplings filled with a broth made sweet with pork. As TBW often says, it’s really hard to find bad food in these parts. Because there’s so much competition, if a place isn’t good, it just can’t stay open. At the same time, it’s always great to have a nice meal, especially one you just didn’t think you’d be having in a Shanghainese restaurant on a random Tuesday night, way far out in Queens. I won’t lie, while the food was yummy, part of what I enjoyed about the meal was the walk through Flushing to get there. 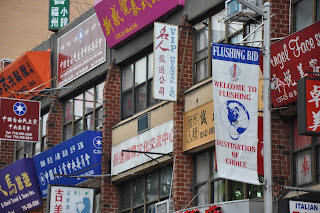 Many thanks to TBW for making me get out of my Manhattan box. I would say for certain, after having gone to Flushing, to eschew Manhattan’s Chinatown and instead hop on the 7 for a visual and physical feast on a much larger and dare I say mesmerizing scale.
Posted by miss-manhattan at 4:40 PM No comments: