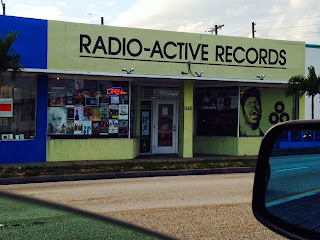 Sitting outside today on Las Olas Boulevard, sipping a tea latte in front of a fountain (New Yorkers, my apologies if I've just boiled your blood a bit...) and staring at palm trees swathed in Christmas lights, I knew a Florida post was on the horizon. After a long and leisurely lunch and gossip session with my near and dear JS, I made my way to a place that was really one of my second homes as a budding music nerd down here: Radio-Active Records. 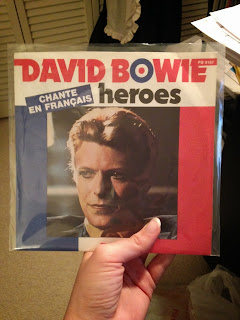 Selling everything from new and used vinyl (LPs, 45s, etc.) and any possible accessory to go with it, as well as new and used CDs, posters, magazines, and more, Radio-Active Records is not really a gem but an entire diamond mine of an independent music store. Nestled in the same shopping center as a tattoo parlor, a gay bar and an art gallery, it's a record store that has happily and effortlessly maintained that hipness all music stores once had: that positive, these-people-know-what-they're-talking-about-but-aren't-dicks-about-it vibe that makes for a good business and a stellar community built around it. In addition to their awesome selection of tuneage (Shannon on the Clams on vinyl, whaaat! In addition to obscure Maria Muldaur albums and an utterly rad David Bowie 45 where he sings "Heroes" in French...that last one I picked up for myself, thank you very much), Radio-Active also hosts cool, up-and-coming bands in their store: recent performances include blues rockers Deap Vally and punk outfit Remembering Never).

Even a swirling land of corporate music retailers, I always chose Radio-Active instead. The staff is friendly and helpful, not like Jack Black's character in High Fidelity who will balk at your distaste of The Jesus and Mary Chain despite your love of Echo and the Bunnymen. Plus, it's great to get into a conversation with someone who not only has varied tastes and can recommend you sounds you might like, but someone who is also willing to learn from you! (Thank you to R-A's Scott today, who told me about Burial and The Vaccines, and was willing to listen about my interest in Brooklyn band Parquet Courts). And of course I will admit it feels great when they heartily approve of your day's purchases, that my own good taste in music is hardly a figment of my own imagination. 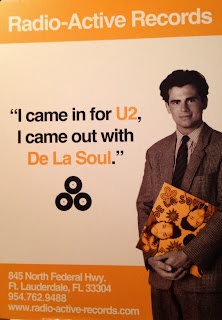 Another fun part about today is that their 45s sale on this weekend (and hurrah, I got to support during Small Business Saturday!). There were crates upon crates upon boxes upon boxes filled with the things, all for $1 apiece. They were given to the store by a woman who had purchased all of them in hopes of filling a jukebox she never purchased. I managed to wrangle some oldie-but-goodies (Johnnie Ray, Tavares, The Seekers, and other divinities) from the crates, as well as my aforementioned David Bowie 45. I listened to the latter on their gorgeous sound system, headphones canceling all exterior noise and allowing me to lose myself in, forgive the Phil Spector reference, a wall of sound. Bowie swooned and lamented to me, the tune sweeping in a hopeful upswing through my ears. I must listen to my records more often, I said to myself. A good music store, a store like Radio-Active Records, will (and should) have that effect on you. See below for a photo of their sweet postcard with all of their contact info. If you're out of state, you can follow their radness on Twitter, Facebook, and Instagram, where they're really good at showing what's up at the store.

Posted by miss-manhattan at 10:05 PM No comments: