It was an odd experience to find myself on a train at 7:45am on Wednesday headed to a rave.

Normally I'd guess the experience would be the opposite, that one is heading home from a rave at such an hour. And this probably wouldn't happen on a Wednesday, right?

But there's a new sort of party happening in New York, held by a few different organizations, that of the morning rave. Usually a rave might conjure visions of people in all variety of neon attire dancing, maybe on all variety of drugs, floating like glow-in-the-dark stars through an abandoned factory alongside pulsating, electronic, bass-dropping deep house music. A morning rave is like that but, of course in the daytime and involves smoothies instead of drugs, coffee where there might usually be alcohol, as well as massages and yoga, all before 10am. (Please forgive the photos, they're from my iPhone.) 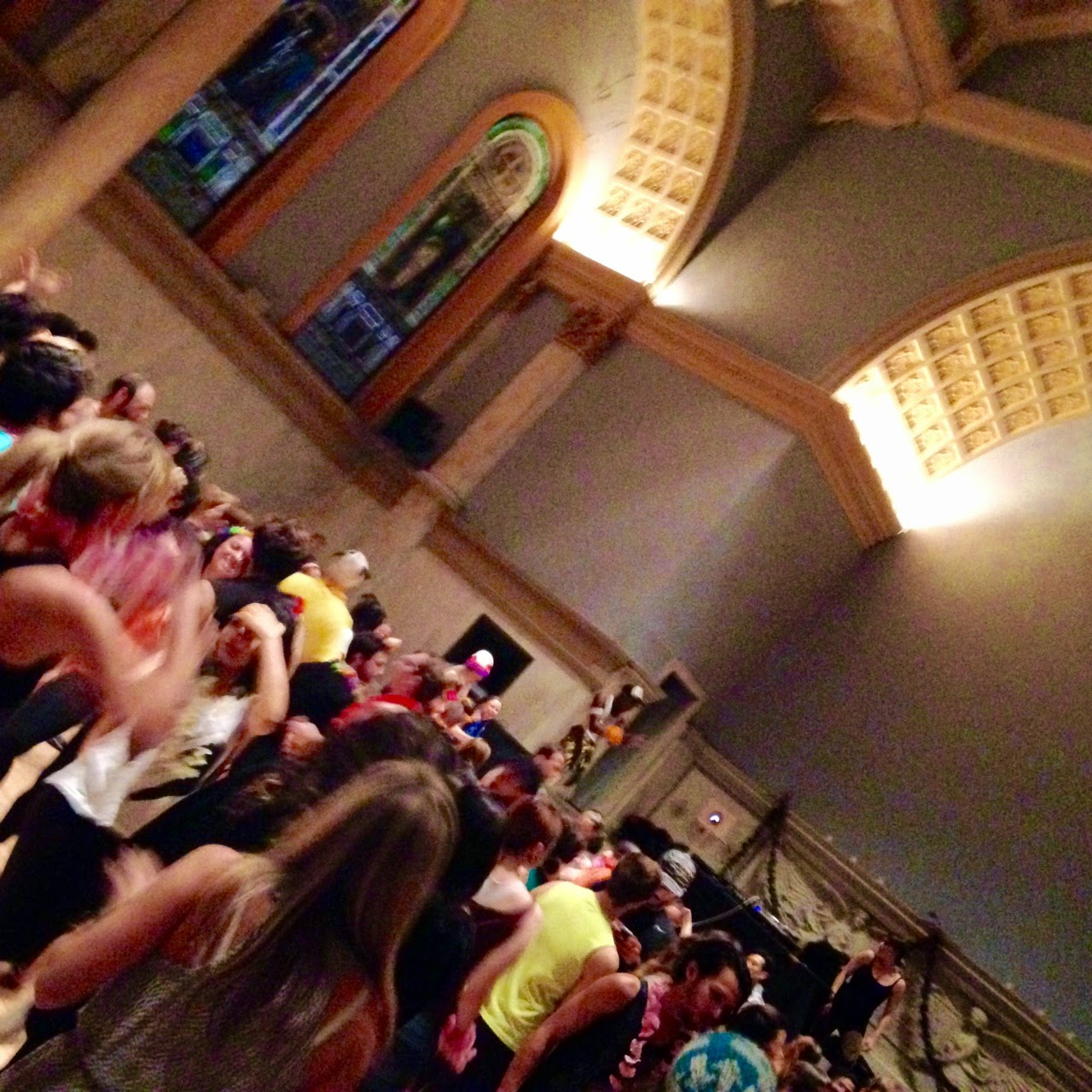 One such party is Morning Gloryville, which has now launched in 15 cities across the globe. Conceived by events producer Samantha Moyo and bodywork therapist Nico Thoemmes in 2013, the event asks dancers to show up sober, and invites you to "rave your way into the day," to get some exercise in a way that's far more fun and funky than heading to the gym. It's meant to be a positive and uplifting experience, one to challenge "traditional morning culture," where getting up is thought of as The Worst Thing Ever.

I always work up a great sweat when I go dancing at night, so why not give it a shot during the day? It was interesting--even though getting out of bed at the ungodly hour of 7am (sorry, traditional-work-hours folks, it's freelancer's life and everything's relative!) usually makes me groan "WHY AM I DOING THIS?!?" this past Wednesday morning I didn't do that. I had been excited to go to to Morning Gloryville for a few days, and that excitement got me out of bed pretty easily.

Requested to "dress to sweat," I put on my usual exercise clothes--a tank top and black pants, sneakers--and made my way down to the Judson Church. While the Judson is also definitely a church, it is more often than not a secular performance space used by all manner of arts groups, from modern dance to theatre, music, and much more. I heard Morning Gloryville before I saw it. Tell-tale "nst nst" beats flowed from the church onto Washington Square South and let me know I was in the right direction. One sign pointed me toward yoga also offered by the events, but I knew I was just going to be there for the dancing. After checking in at the press table (thanks for having me, Annie!), I went to make my way inside, only to be welcomed by a girl dressed as a bumblebee giving me a great big hug. "Welcome to Morning Gloryville!" she said as her glitter-covered eyes sparkled and her yellow wings shook behind her. Unaccustomed to being hugged before entering a party, I was a little bewildered but appreciated such a kind, unusual gesture.

Entering, I saw an endless row of coats, that promised table offering free coffee, a smoothie bar, and a water bar. There were all kinds of people inside, too--young people who were easily NYU students in workout attire similar to mine; women in baggy, patterned pants and crop tops wearing combat boots and crystals around their necks; a pale man with a single dreadlock tickling his neck; a ginger bloke wearing red long underwear, complete with butt flap; girls in metallic, patterned leggings wearing short crayon-colored wigs; another, muscular man wearing a camouflage mesh tank top and some of the tiniest shorts I have ever seen; a girl wearing a bathing suit over her leggings, and much more, all alongside a shirtless, hairy older gentleman--and everyone was dancing like apocalypse was coming. Hearts full of good vibes, they swayed and twirled and turned and did fancy things with their feet (because, of course, House is not just a style of music, but a way to dance). Some people even did capoeira and ballet because whatever rubs your Buddha, right? 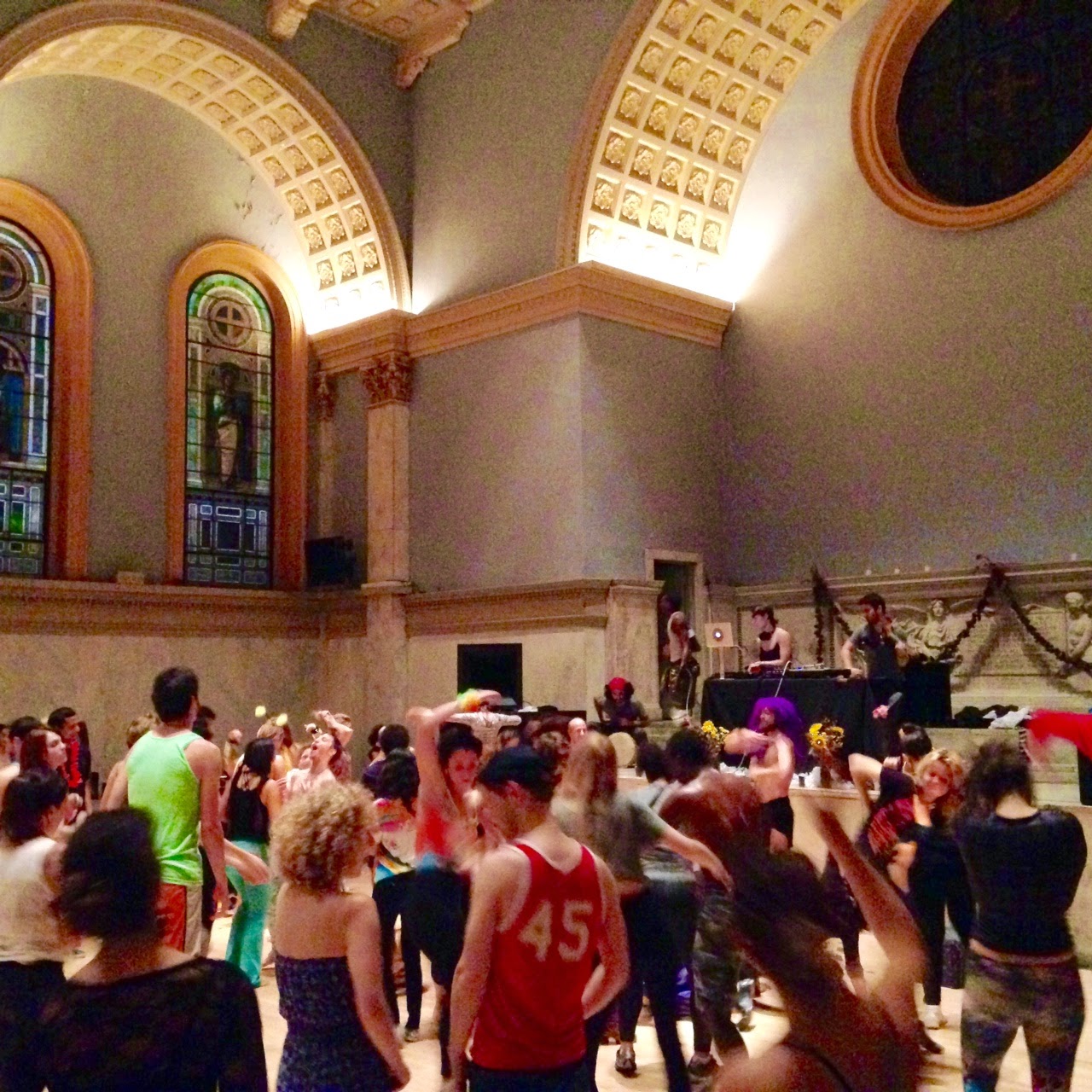 While I normally don't dance to house, I danced with an open mind to every bass drop and "nst nst," I twirled and bounced and swirled with the best of them. Every so often the very energetic and positive emcees would come on the mike and offer a few words to get everyone's good vibrations flowing (and to remind them to hydrate! I found both particularly helpful). I think my favorite was, "When you dance more, you smile more, and when you smile more, you think less." I often feel like I think too much, but even I felt my brain turn off for a little bit and inhale some of those good vibes everyone was so intent on ingesting. There was something very "California" about it all to me--just let go, man! Push the bad energy out and invite the good energy in!--that sort of often-parodied earthy-crunchiness was alive and well here without any sense of irony. And I appreciated it! It was nice to see that people really believed in the positive atmosphere, and that made it an even more positive space to be in, even for an occasionally skeptical New Yorker like me.

If you're into House, you think you'd like a morning workout in the form of a funky dance party, and you dig some good vibes, I highly recommend Morning Gloryville. Many thanks to MG's New York producer Annie Fabricant for having me! Check out the New York chapter here, and get your "nst nst" on.

Posted by miss-manhattan at 2:00 PM No comments: