"If you have a problem with nudity of any kind, now is the time to leave!" shouted Brooklyn borough president Marty Markowitz in his thick, New York accent as he floated down Surf Avenue on Coney Island. "The Mermaid Parade is on its way!"

The Mermaid Parade is the nation's biggest art parade, where people of all shapes, sizes, and sexes put their personal spin on sea life in some of the most creative, ridiculous, and sometimes risque ways. The parade itself has been going strong for 30 years, and it's not only a celebration of the summer solstice, but of self-expression and self-esteem.

This year, the mermaids faced a big threat--Hurricane Sandy had destroyed the Coney Island Freak Show, Museum, and Gift Shop, so funding for the parade, which typically comes from those sources, had been slashed. Luckily, the parade ran a successful Kickstarter campaign and met their funding goal of $100,000 and then some!

I hadn't been to the parade since I moved to New York, and I wasn't going to let another year go by. I woke up early, got my bagel and cream cheese at the corner bodega, and hopped on the train. Leaving the station at Coney Island, it was a swarm of people greater than I had experienced even at Grand Central during rush hour. I was nervous--despite living in New York for almost three years, I don't like large crowds, or standing still and getting stuck in them. It's not a claustrophobia thing, just an I'M SO IMPATIENT thing. So when at one point I was trapped in a herd of people standing stock still on a sidewalk, I worried that perhaps I had not made the right decision to come all the way down here. But I felt my impatience getting the best of me and took a deep breath, ultimately finding a great photo-taking spot right next to the police barricade.

What I instantly noticed about the Mermaid Parade is the good-natured rowdiness of its crowd. People had camped out in lawn chairs with coolers, some themselves in mermaid attire, cheering on participants. One woman held a sign that said 'I Love Dick,' a salute to the Coney Island drummer of the same name. And of course they're there to see scantily clad persons in mermaid/merman/merperson regalia. Sometimes a tail and pasties is all you'll see, or even head-to-toe body paint with a few strategically placed shells.

My favorite sea creatures were the ones who, to be cliche about it, thought outside the box a little bit. There was a Frankenmermaid, a woman who made her tail out of sand castle toys, a lobster girl being chased around by a chef with a big silver pot, a mermaid on top of a bundle of rice being pushed by a man dressed as a sushi chef, a Carmen Mer-anda, a man who made his fish costume out of Metro Cards, a man in drag wearing what you could tell was a homemade coral reef costume, and heaven knows what else. Mad props to the parents who bring their children to watch the parade, too, as if to say 'these are bodies and you are not to be afraid of them.' For the parade itself, the adult costumes and the children's costumes are of course separated but hey, Markowitz gave fair warning!

There's truth to the idea that happiness and joy are catching. For a few hours, I was swallowed up by the Mermaid Parade, troubles gone and only a glittery, shell-encrusted interior remained. It was enough to carry me through the rest of the day. Which, of course, included a trip to Nathan's that was, is, and always will be worth the crazy wait in line to get one of their mythical corn dogs; an hour or two on the beach reading New York magazine, and a trip home with more mermaids, and even a pirate or two. Some stuff you just can't make up. 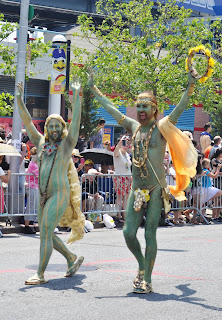 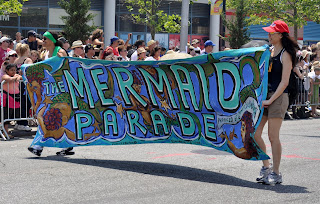 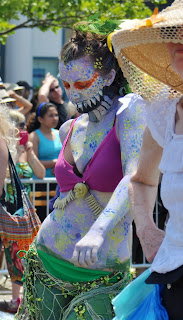 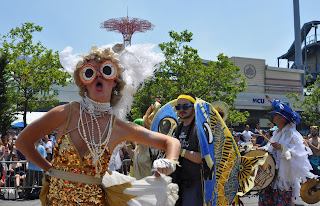 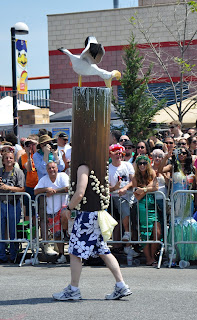 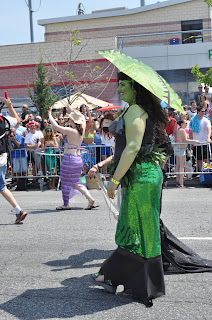 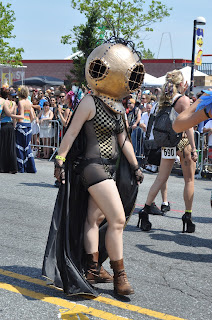 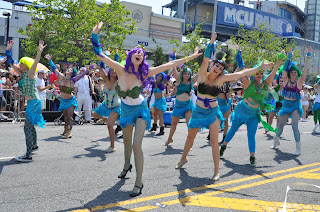 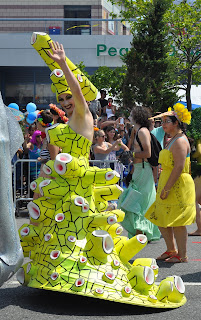 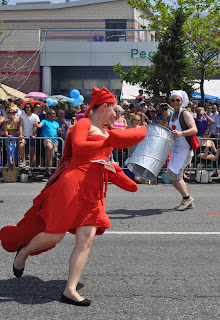 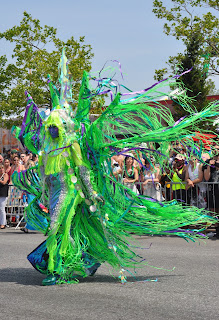 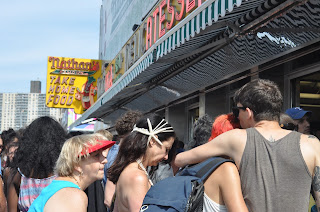 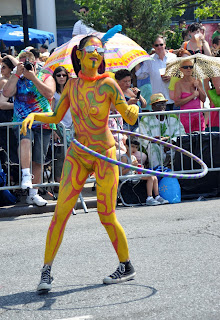 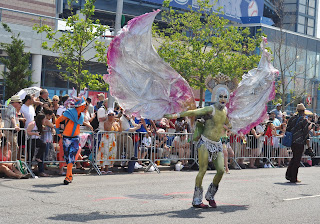 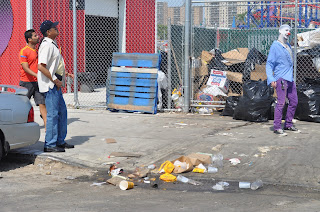 Posted by miss-manhattan at 3:37 PM No comments: