For their first date, Addison and Aggie were supposed to get hot cocoa and meet in Central Park, but due to rain they had to make other plans. Today though, a few years after they met, hot cocoa wasn't exactly on the menu.

Addison had initially reached out to our mutual friend Cassandra to see if she would take surprise engagement photos of them in Central Park, but she had recently moved to Stockholm. She was kind enough, however, to refer Addison to me. Would I be interested in taking on such a project? I definitely was.

The beautiful vastness of Central Park and the fact that I had never actually met Addison and Aggie became our dilemmas. How would we be able to meet up so I could photograph them and capture the big moment, while still recognizing them and not being seen? I would take some time to plan and plot. I felt a rush of my inner James Bond.

"If you can pick out a particular entrance of the park you'd like to go through, I could be there and I can let you both walk past me, then just begin casually strolling behind you after a few minutes, secret agent-style," I wrote to him. My fingers trembled with excitement and anticipation as I even wrote the words. We'd have to be totally stealth, but if it worked out, it would be amazing. He could text me selfies of he and Aggie under the guise of posting them online so I knew what they were wearing. I would do the same back to him, and tell him exactly where I would be standing so Addison and I would see each other, then I'd know to follow him into the park. We ultimately decided to meet outside the Museum of Natural History.

Even as I write this now, a week later, my heart beats faster. I couldn't sleep the night before. There were so many variables out of my control. What if the bus broke down on my way there? What if their train got stuck? What if Aggie wanted to stop inside the museum? What if I sneezed too loud as they walked past and she noticed me? I tossed and turned all night.

I set my text ringer very loud so the next morning when Addison texted me, I'd be on the move. Around 9:30, he assured me everything was going to plan. Not too long after, I got pictures of he and Aggie. She was wearing a long, light pink coat and he was wearing a grey puffy vest. I'd have no trouble noticing them.

And then, my checklist to myself began. Did I charge all my batteries? Yes. Did I have enough room on my memory card? Yes. Did I have every lens I'd need? Yes. I was originally going to use the longest lens I had, but I didn't want to draw attention to myself--a very long lens protruding from a very short person's face and/or frame is by no means stealth--so I went with my second longest, the one I had used before I had the other one. If it worked on ballerinas far away at Lincoln Center, after all, it would work for Addison and Aggie.

And then what would I wear? I had to be noticeable enough so Addison would see me, but inconspicuous enough that Aggie wouldn't think twice about some chick leaning on a street corner. It was not the day for my favorite leopard coat, in other words. I decided on a black sweater and black jeans with an army green jacket, tan high-tops, and a black beanie. I carried my gear in a green leather bag. I'd blend in perfectly with the scenery. I texted Addison photos so he'd know what I looked like, too.

I arrived probably way too early, but I decided I'd rather be chilled out and waiting for them then scrambling to get there. Texts from Addison were on schedule, though at one point they got on the wrong train and had to come back around to the right stop. Texts resumed after they got off the train. They were now rounding the south end of the museum. I kept my eye out for a pink coat as I leaned, rather shadily, if do say so myself, on a gate on the corner of 80th and Central Park West. Then I saw the coat. I made eye contact with Addison. It was on.

They crossed Central Park West and headed down into the park. I was a cool distance away from them until they rounded a bend but turned back around and walked right back to me. The sidewalk had ended and led into the street, so they had simply moved in another direction to actually get into the park. My innards melted. NOOOOOOO! my brain screamed. I HAVE FAILED. I stood immobile and, by the grace of RuPaul, remembered the millennial stereotype of always being in your phone like an asshole. In a swift movement I reached into my bag for my phone as they were stepping back past me and tapped on the screen indiscriminately until they were safely far enough away from me to not notice. MISSION RESUMED. No failure to speak of. Addison was totally casual and never made eye contact with me, bless his soul.

I had assumed a safe distance again, and my lens length was perfect. Every so often Aggie would turn around and marvel at nature and I would slowly turn away from her, pretending to take pictures of trees. I felt my heart pound, like at any moment she would notice me, turn to Addison and say, why is that strange girl in all neutrals taking pictures of us? At various points I darted into bushes and pressed myself up against trees and warily rounded corners so I would remain unseen. I followed them into various paths, over the Oak Bridge and into the Ramble. We went up and down stone steps, through which my brain cried out, knowing full well my propensity toward falling, Do not trip, you idiot! Keep your limbs together just once for the sake of their engagement!


As we crossed up the stones and deeper into the park, another couple maneuvered in between us. Who the hell are you? I wanted to say. Get out of here, you fools, Addison and Aggie are trying to get engaged! But eventually, thankfully, the couple disappeared. Addison led Aggie to a beautiful area covered in almost a canopy of fall leaves in gorgeous colors. They stopped walking and Addison turned to her. THIS IS IT, I thought. THIS IS THE MOMENT. My hands shook and my shutter snapped wildly as Addison got down on one knee and Aggie's hand flew over her mouth. I caught it all. She said yes, and they kissed, and she jumped into his arms. My heart rate slowed. Addison waved for me to come out and I said hello and congratulations and gave hugs and took more pictures. Addison explained I had been there the whole time. "You're so sneaky!" Aggie exclaimed. She had  no idea the engagement was coming, but Addison had been planning it for months. They laughed and smiled and danced like Drake in "Hotline Bling."

We did a couple of posed shots near the lake and the skyline. In between shots, Addison told Aggie that the ring had 26 stones in it, one for each year it took for her to get to him. My brain sputtered and died and I'm really happy I held together a speck of professionalism and didn't start weeping into my viewfinder. They are such lovely people and I wish them a lifetime of happiness (and thanks so much for letting me write about this on the blog, guys!). It was such an incredible experience to be a part of this once-in-a-lifetime moment, and I will always cherish it. Congratulations again! 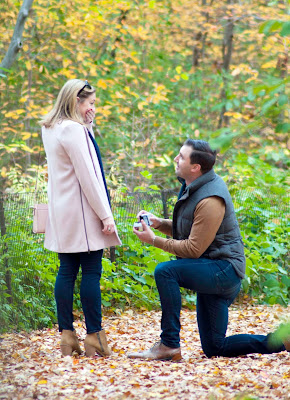 Posted by miss-manhattan at 4:01 PM No comments: