“When’s the last time you were in a car?” JAL asks me.

I’m sitting next to her as we drive away from the mall and toward her house, winding our way through back streets and side streets I didn’t know existed.

“Um…” I have to think about it for a second. It was August, just a few months earlier, the last time I visited Florida before now, Thanksgiving time. I don’t particularly miss being in a car—that is to say, I don’t particularly miss driving one because anyone who knows me knows I take cabs probably much more often than I should. But every time I come home, there gets to be a certain day where I’m just so tired of being in the house I need to drive, and drive anywhere just to shake off the monotony of whatever the last few days in the house have been. Watching TCM with my mom or Jason Statham movies with my dad. Working my face off, lying on my bed in nine different ways trying to write an article that for some reason I’ve made due during what’s supposed to be my vacation. Sitting in the back reading a magazine in the sun. Or just sitting inside doing nothing.

I’ve never been a person who can do nothing for extended periods of time. It’s short, two days max, sometimes two hours max, before I start to fray at the edges, snap at anyone in my wake, and make an internal “grrrrrrrr” sound that would put an angry cat to shame.

My internal compass guides me the same place it always does, always has: the bookstore, the world’s most perfect place to wander and get lost when you simply need to just get out. My “grrrrrrrr” slowly but surely fades into a purr as soon as I place the key in the ignition. Driving down University Drive, it’s 45 mph speed limit and occasionally curving but mostly straight-shot roads if you leave the house at the right time. I change the radio to something good because I can’t drive in silence or with shitty music because that, of all things, is what’s most distracting to me. And soon David Bowie or the Pretenders or Phoenix or the Beastie Boys will spill out of the speakers (never too loud, though, unless the windows are down and it’s 1am and there’s nobody on the road, of course). Part of me will breathe, relax, unclench my jaw that I’ve been holding tight for the last few hours as I slowly make my way out the door, angry at myself for not getting there faster. I’ll feel my shoulders begin to move, my neck relax.

People write all kinds of manifestos about driving, how it brings them peace or a sense of control. I suppose it brings me both of those things, but only if I’m driving in places I already know—I’m not a good driver otherwise, and I will not, WILL NOT take the highway because well, I’m too scared of dying. I knew just enough people or people who knew people in high school who died untimely deaths in car accidents that I don’t know if I will ever feel truly safe behind the wheel of a car. I remember one time driving on the highway with friends and clenching the wheel so tight that my knuckles sparkled white on the steering wheel, having to pause every few minutes or so to stretch my hands. But when I’m driving someplace I know, my hands perform a quiet choreography on the steering wheel, turning the thing at just the right angles almost from sheer muscle memory alone. That’s actually something I look forward to, not just the choreography but the fact that I’m doing it means I’m visiting my old haunts, a part of myself that still only lives in South Florida, and not the part I said good riddance to when I moved away.

My mother loves to drive, my father drives faster than he should, and my boyfriend does both of those things (though the latter not while I’m in the car because he knows better). I’m happy to let them take the wheel when they want to. Driving is like a pair of shoes I like but never wear because I don’t have the occasion: they’re nice, but they mostly sit in my closet. I’m glad I have them, and I enjoy wearing them when I have the opportunity, but it’s also okay with me that I don’t wear them too often. So I’m happy to be the passenger, especially if I know someone else will do a better job driving than I will.

I didn’t get my license until I was 17, the August before I left for college. I took driving lessons first with my parents, who made no pretenses about holding on for dear life when I was behind the wheel; and then with an uncle who was a former driving instructor and told me a car is a weapon that can kill you and needs about the length of a roller skate to do significant damage; and finally with a mild-mannered man in a VW bug who never flinched if I made an error but instead asked me to try again. I failed my first driving test because, and I swear I will never forget these words as long as I live, I “brushed a cone” getting out of a parking space, which meant I failed no matter what else I did right during the test (which, apparently, was everything). I came home and sat in the sun in my heavy school uniform, totally ashamed. But I went back a few months later after practicing, practicing, practicing, and this time had two judges in the car, one woman in training and another already certified. “Well, uh, I can’t see anything she did wrong,” the trainee said. “That sounds about right to me,” the certified one said. And so I was given my license, the same one I have today. The picture is now 12 years old and whenever I get carded at bars people give it a double-take. I’m wearing an Old Navy t-shirt in it, and facing the camera straight on, which I never do now because it makes my nose look like a faucet. Maybe one day I will get a new photo. Maybe one day I’ll drive more.

I wish I could say I missed driving when I’m in New York, but what I really think I miss is having the windows down and the music playing, the cool air rolling around in my hair, brushing past my cheeks on a long ride home on a usually busy street that’s silent at 2am save for my car. Those things happen when I’m driving, yes, but to me they were always something more.
Posted by miss-manhattan at 10:53 PM No comments:

If you ask Andrew Lockhart what his title is, he will give you an interesting response. “First of all, I am an asshole,” he laughs. I laugh, too. “No, really,” he says. “I mean it.” He explains to me how he’ll cancel meetings if it’s raining because umbrellas don’t keep you dry--they don’t keep you dry!--and then you arrive at a meeting all wet and cold and miserable and what’s the point? I am unconvinced by the umbrella argument, especially since the man has already let me spend the day following him around and taking pictures. And I wonder how you could be an asshole, like really be an asshole, when your job is essentially to work with people all day? And not just people, but finicky people like artists and art collectors and gallery owners. Andrew Lockhart, I would say, is first and foremost a connector of people. He runs fine art consultancy The Black Swan Projekt and creative consultancy prō jekt′ : nyc, which link artists and creatives to the brands and agencies for which they would be the best fit. Andrew also works as a curator, an art advisor, an event producer and so much more. He has taken all of his past experiences--marketing, PR, event promotion, corporate event planning, brand consulting, and business development among them--and put them to work in the art world. He is currently interested in bringing art out of a gallery setting where it can be more hands-on and experiential. It makes sense, then, for him to do a studio visit with artist Carolina Falkholt, a Swedish artist, graffiti writer, and musician who is doing a residency in Brooklyn and will soon be doing a mural on the Lower East Side. Andrew walks into her studio and is immediately drawn to her canvases, neon toned and shiny, and a massive paper construction of signing hands. He stands with his arms crossed, a hand leaning on his mouth for a minute before coming up with names of people he wants to connect her to. People who work in jewelry, people who work in billboard advertising, people who would be excited to have her work on their walls. And what’s great is that Andrew will actually connect these people to her and vice versa. I know because he’s already connected me to people he said he would. I’ve noticed this is not something people do a lot, but Andrew almost makes a point of it. “Why would I say I would connect someone and then not do it?” he says. It’s not the kind of person he wants to be. Later, we walk down Bedford Avenue and head toward sleek, arty Greenpoint workspace A/D/O. An elderly woman, nearly bent in half with scoliosis, asks if he would kindly help her up to her top floor with her groceries and he obliges. “If it were my mom, I would want someone to help her,” he says afterward. I still have trouble believing he’s an asshole.
Follow Andrew on Instagram.Follow me on Instagram and Twitter.Subscribe to Miss Manhattan Hangs Out. 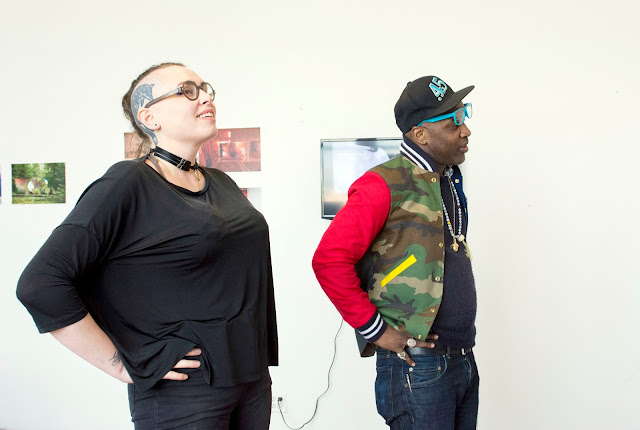 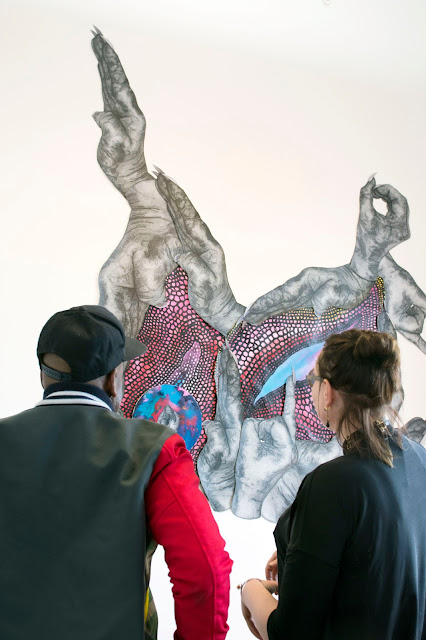 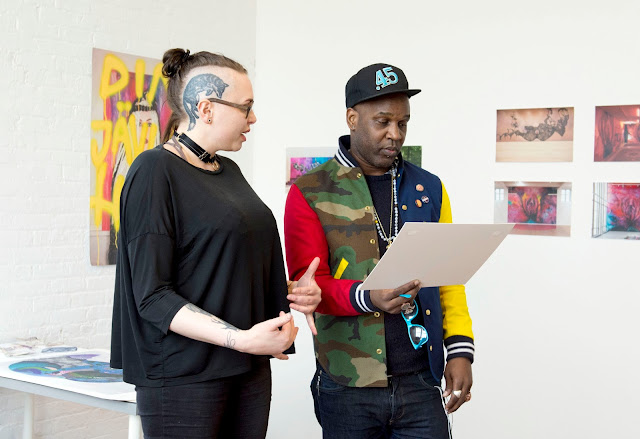 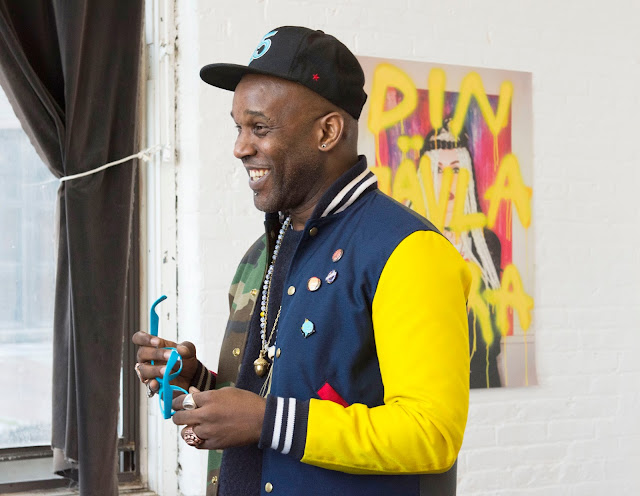 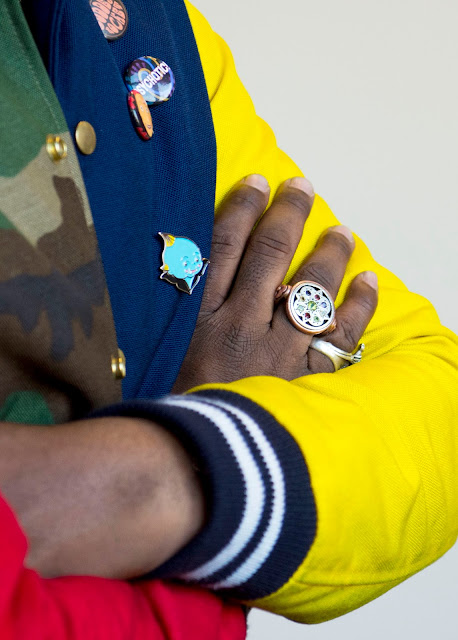 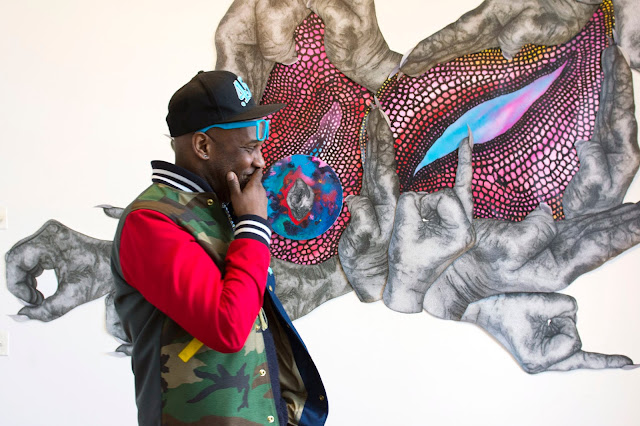 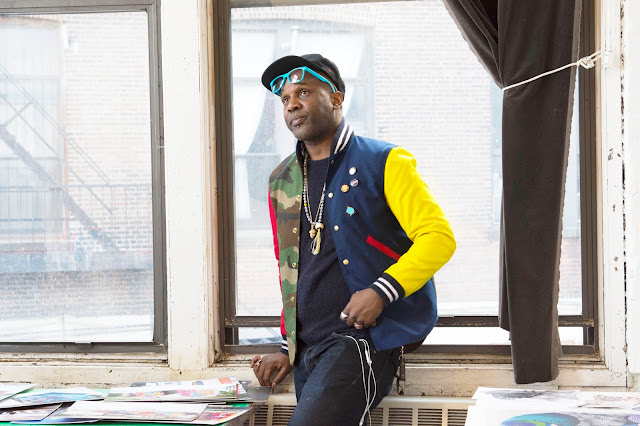 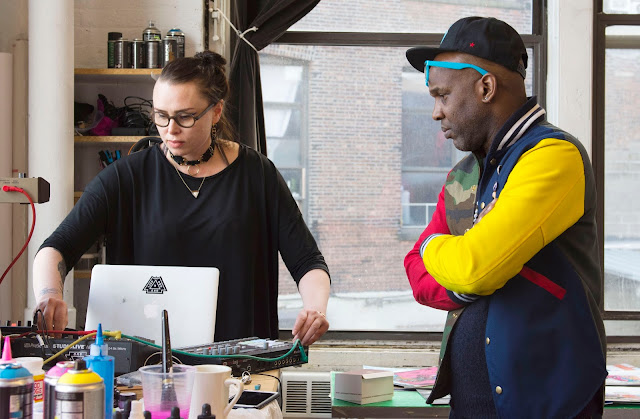 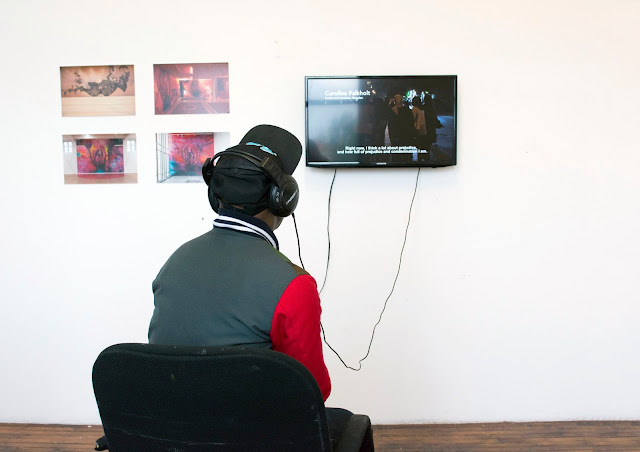 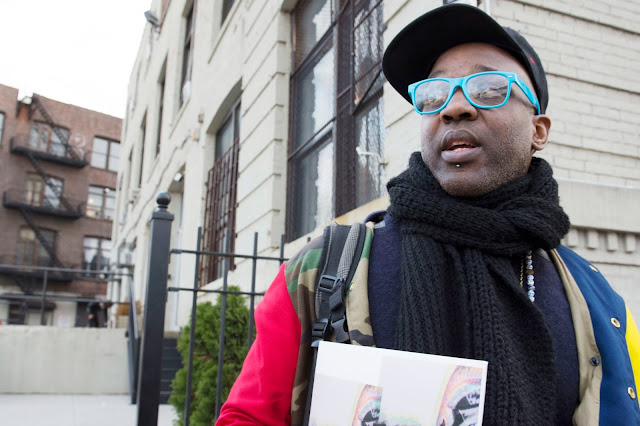 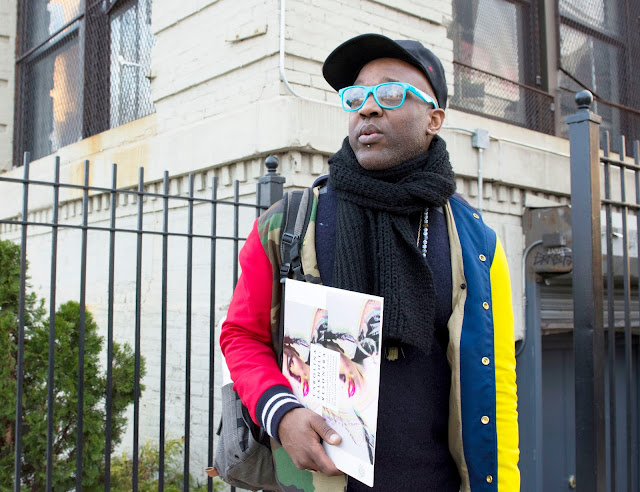 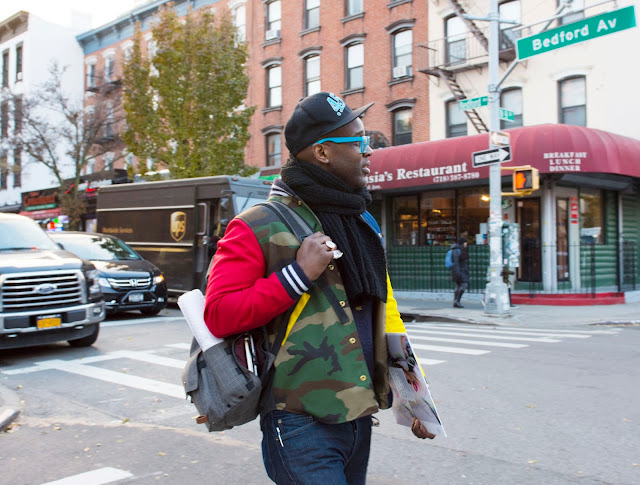 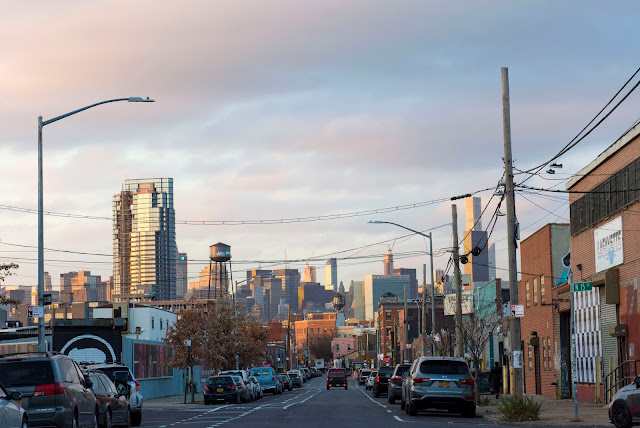 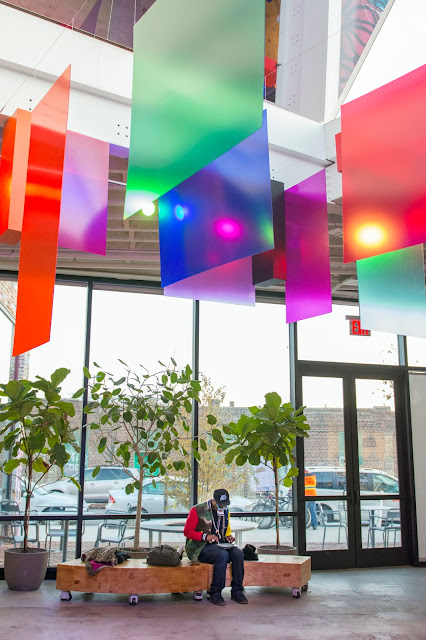 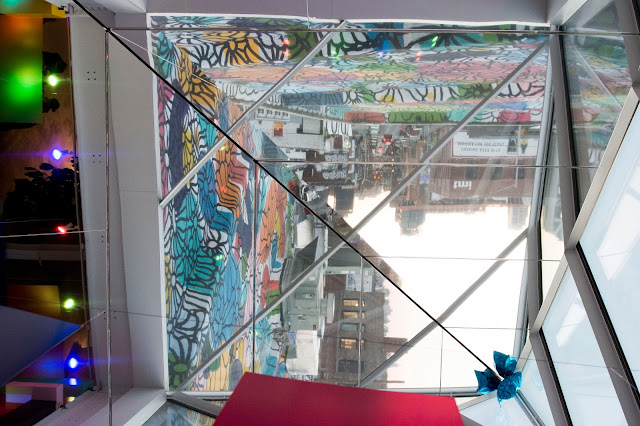 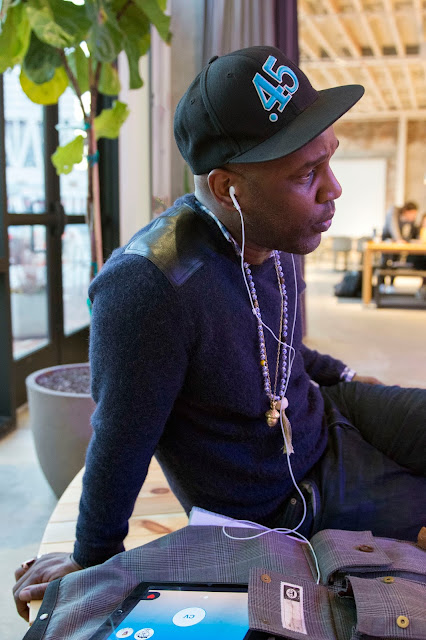 Posted by miss-manhattan at 2:30 PM No comments: