RaGo's birthday was four months ago, but I didn't have a chance to celebrate with her until this week. There are few things in the world the woman loves more than cheese--especially gooey, melted cheese on top of, well, whatever you got--so I gave her a list of options of places I'd like to take her that might feature such an experience.

From the list, she chose Raclette in the East Village, where they do the real deal raclette thing: the edge of half a wheel of cheese heated and bubbling then scraped with a special knife onto your plate of potatoes, meat, salad, vegetables, you name it. I had never had raclette before, but I once flirted with a man on the train who was from Switzerland and told me it was huge there. Just cheese on cheese on cheese scraped for your life onto your plate. It was the perfect place to take RaGo.

What's interesting about Raclette is that they only do reservations online--I've become aware, at my old age, that this is not in fact unusual, but this was my first encounter with the experience. I even tried to call and there was a message saying the equivalent of "nah, you can't do that here" but, you know, a lot nicer than that. The other interesting part about this is that, though RaGo and I made these plans literally weeks ago, I did not find out until the day of that you even needed a reservation (though, to their credit, it does say so rather largely on their website, so the onus is totally on me). So there I was, hours before we were supposed to meet, frantically perusing their website for reservations and trying to call, but to no avail. I saw that they did, in fact, accept walk-ins, so I resolved to go down there early--like, way, way early--to see if I could snag us a table. I had made a promise to RaGo and there was no way I was going to mess it up. Just in case, I scoured Google for "fondue east village" and "melted cheese east village" only to find the most consistent recommendation was still Raclette. And I gathered my life together and headed down, arriving at about 6:45pm (we initially wanted to meet at 8). I explained my plight to the gal at the hostess stand, inhaling the scent of pungent cheese as soon as I walked in. She asked when we wanted to come in, looked down at her iPad, and found us a table. And that was it! I had done it! Praise RuPaul.

The evening was brisk, and I walked over to The Bean to have an iced tea and read from my book for a while. I returned to Raclette later and our table was ready, and they even let me sit down though RaGo wasn't there yet, something I find more and more is a rare occurrence these days. Shortly she came in through the door, though, and we began staring at the piles of cheese gliding onto plates, mouths watering in anticipation. We both decided on the Suisse plate, which included roasted potatoes, pearl onions, cornichons, arugula, and a meat of your choice (she chose prosciutto, I jambon de Paris). And what sort of birthday would it be without a bottle of wine, Cabernet Sauvignon, which we split.

Soon it was our turn to be cheesed, and our plates came out followed by a gal holding that giant half-wheel we both stared at lovingly. We watched as the waterfall of cheese fell first on my plate then, after another heating session perhaps, on her plate. The waterfall somehow expertly fell over the whole plate of food, and we began digging in, mouths somehow still watering as we continued to eat. We drank our wine, we ate our cheese, we chitted and chatted and after the bottle was finished (don't worry, mom, my liver is fine) we had spent nearly two hours in the restaurant, perhaps in true European style.

But RaGo's birthday was not done yet, and we made our way to Chikalicious, a dessert bar where you can get a prix fixe dessert menu featuring an amuse bouche, "entree," and petit fours (there's also the Dessert Club across the street where you can get funky a la carte items like black sesame ice cream in a churro cone). The menu changes every day, but we got the Warm Chocolate Tart with Pink Peppercorn Ice Cream and Red Wine Sauce, preceded by orange and brown sugar sorbet and followed by a teeny coconut marshmallow, teeny alfajor (Argentinian caramel cookie), and teeny vanilla ice cream on top of a teeny chocolate cookie. Praise RuPaul yet again.

Everyone deserves a little bit of luxury on their birthdays, I think. Whether that's in the form of melted cheese or not is entirely up to you.
Posted by miss-manhattan at 3:09 PM No comments:

Hannah Orenstein’s navy pleated skirt swings as we walk down Avenue A in the East Village. She eases a pair of circular tortoiseshell sunglasses onto her face then gestures toward a curio shop with a red leather -sleeved arm. “Have you ever been to Obscura? I love it here!”Today, the Assistant Features Editor at Seventeen is taking me on a tour of some of her favorite spots in the neighborhood, the quirky and unusual places she has been known to frequent since moving to New York in 2011.Hannah knows who she is down to the velour Juicy Couture sweatsuits I loathe but she loves without even the smallest trace of irony. Even if I hated her guts I would tell you she’s a great writer and a rising star in magazine publishing, with eloquence, elegance, and panache beyond her years. But I don’t, so I’ll also tell you she recently sold her debut novel, Playing With Matches, to Touchstone Books, a Simon & Schuster imprint. I’m delighted to be able to call her a friend, one with whom I continue to bond over a shared, undying love of New York, 1950s style, and good magazine writing. We walk into antiquities and oddities store Obscura and my eyes dart from torn-apart baby dolls to vintage postcards to human skulls that may or may not have once been real. While my brain shivers at the thought of the latter, Hannah seems at home. Traveling south, we go first to Enchantments, New York City’s oldest occult store, to peruse various candles and herbs and pet their pair of black cats. People ask sincere questions about the correct ingredients to use in spells and receive sincere answers. Next we enter to Flower Power, a healing herbs store run by women who identify as Green Witches, to sniff more concoctions. Hannah picks up a jar of their Love Potion No. 9 mixture and inhales. “Would you ever use a love potion?” I ask. She laughs, then considers. “Would I?” We leave for coffee at The Bean on 1st Avenue. Her red lipstick sticks to the drink’s white lid between sips as we head down East 9th Street to Dusty Buttons, a vintage clothing store that has since closed. Hannah purrs with delight as she runs her hands over the cinched 1950s waists of sequined and plaid dresses while urging me to get a vintage Black Sabbath t-shirt. I chuckle. Hannah knows who we both are. Peckish, we avoid the looming rain and duck into Cozy Soup N’ Burger, one of Hannah’s favorite haunts from her NYU days. In the unadorned diner, there since the 1970s, we order omelets—hers her usual Ranchero, mine mushroom—and chit chat, trying to avoid the going back into the rain. We do have to leave eventually, and as the downpour continues we jump into a cab, where she checks email, Twitter, Facebook, Instagram, Snapchat as we motor across the East Village. An umbrella just doesn't go with this outfit.Follow Hannah on Twitter and Instagram. 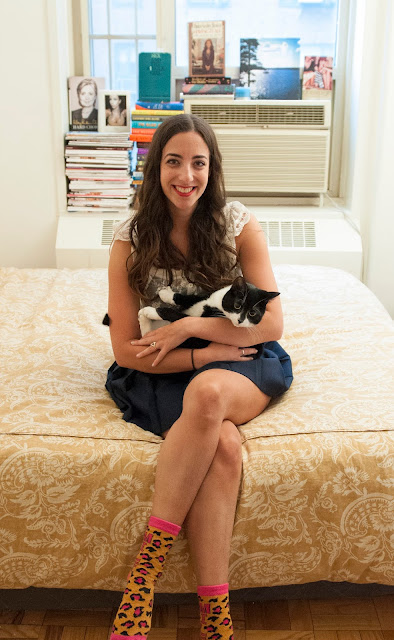 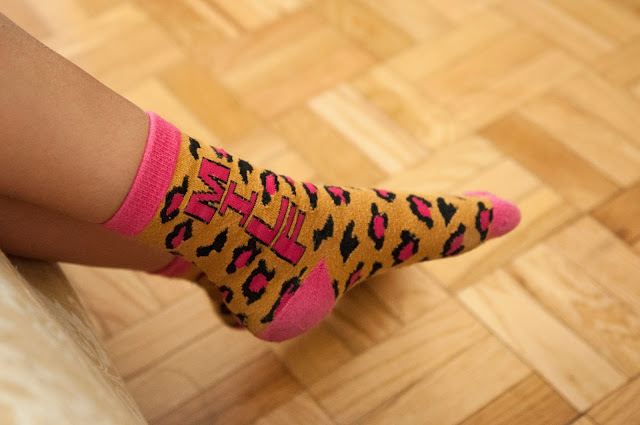 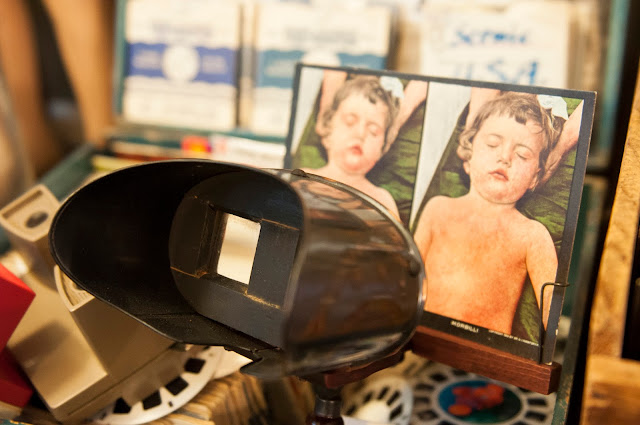 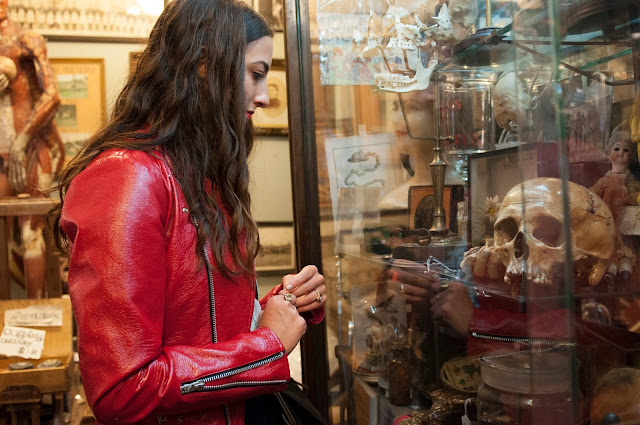 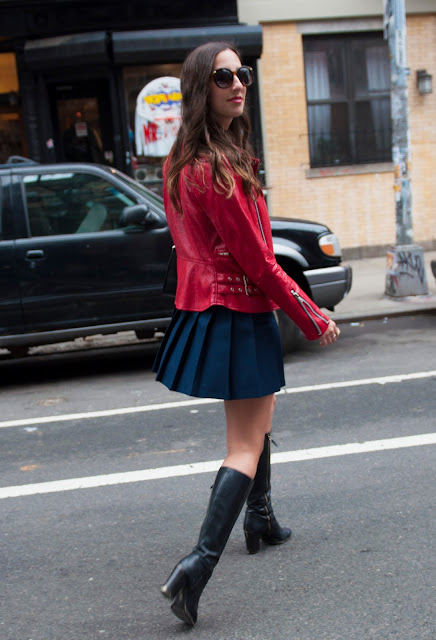 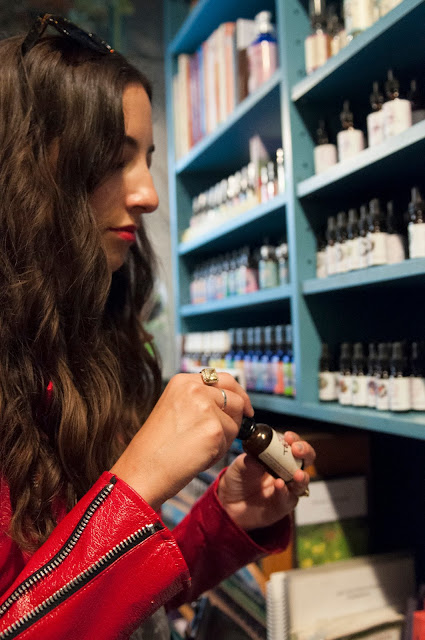 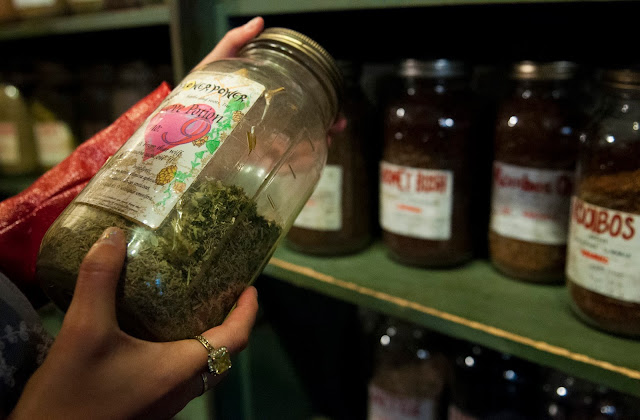 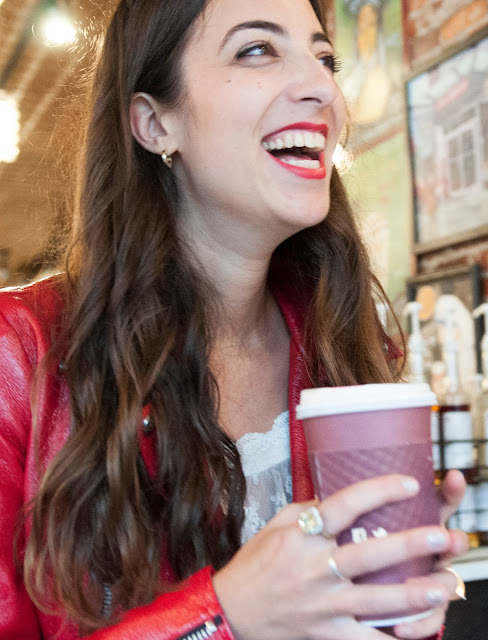 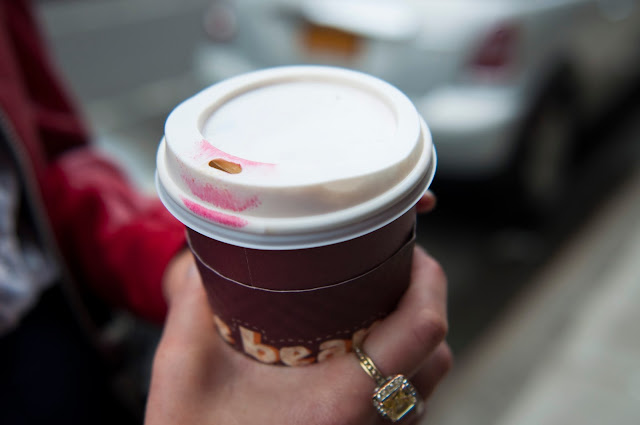 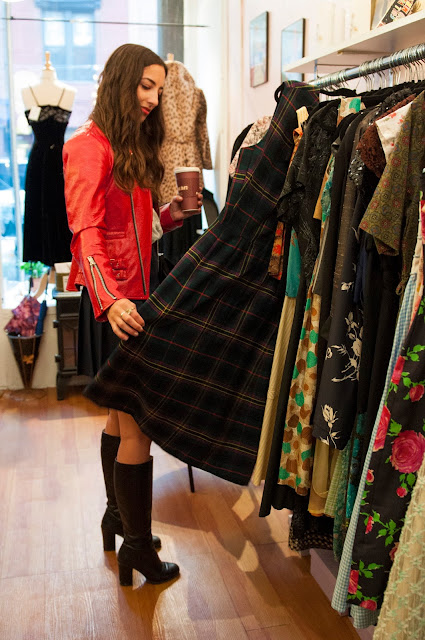 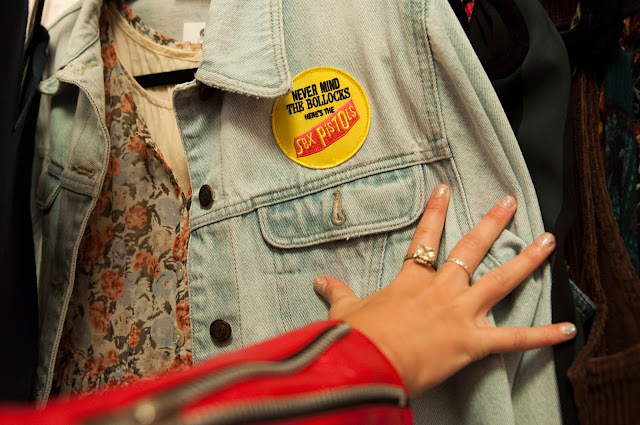 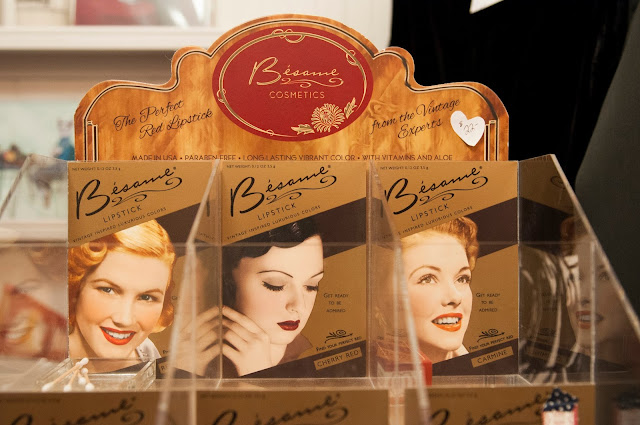 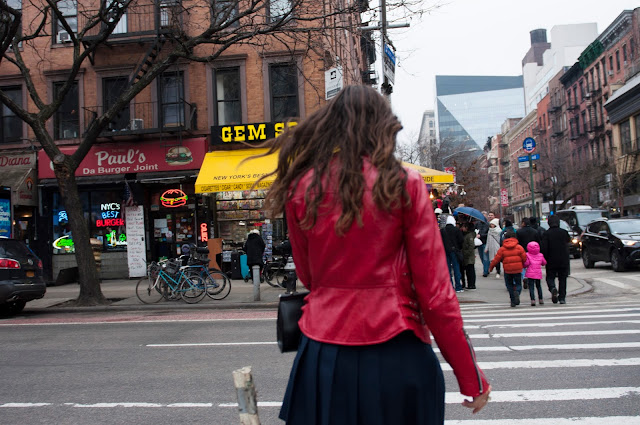 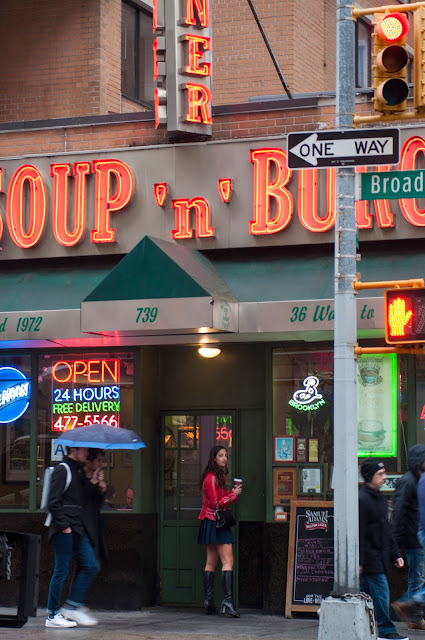 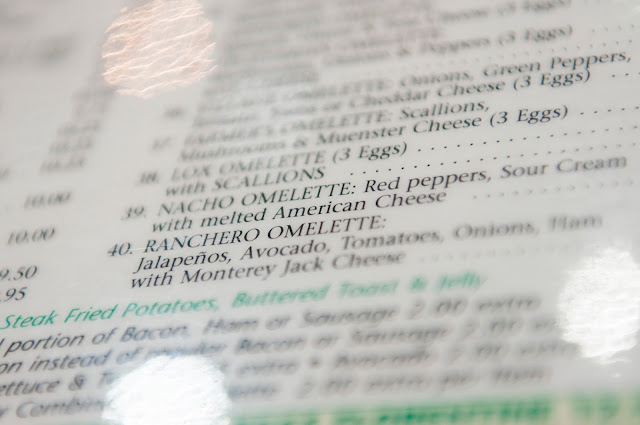 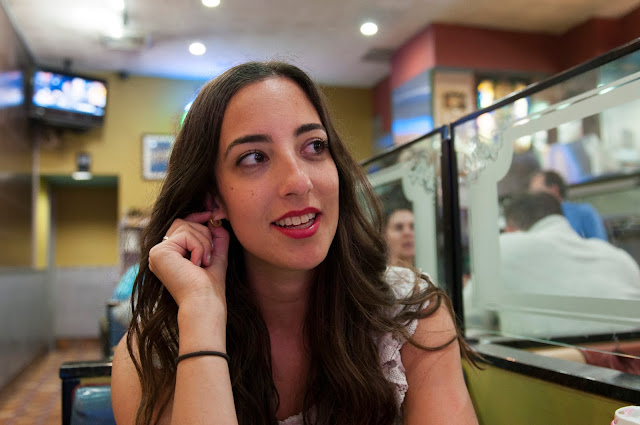 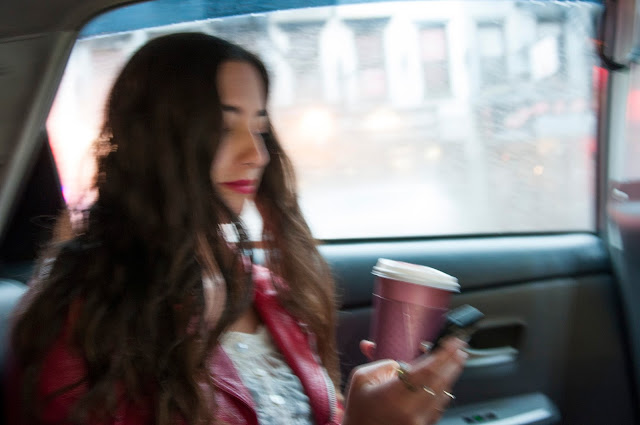 Posted by miss-manhattan at 10:34 AM No comments: