Our calves were indeed laughing at us the next day, but thankfully we would be spending our time (read: hobbling about) in the suburbs of Palo Alto, where AS lives, because she had to work in the evening. You'd think that coming all this way across the country I'd be disappointed by *gasp* a day in the suburbs, what people mostly move to big cities to escape, but I wasn't at all; I've learned that you have to make adventures in your own backyard first and foremost (I think this blog is nothing if not that!), so I was quite looking forward to the suburban experience that I often missed living in New York. A big part of our Palo Alto Day, as it became known was, strange as it may be, going to Target. This is nearly impossible to get to here in the city, even less so if you imagine yourself schlepping more than a bag or two (which I often do). I submitted my formal request for Target, and it was happily accepted by the powers that be (read: AS herself). I don't know just what it is about Target that I love so much, but I think it mostly relates to how my best friend and I used to go there on weekend afternoons and buy crazy, cheap stuff when we were in high school and had nothing else to do. Before Target, however, we took a trip on over to Stanford University.

Ever the nerd, I love a good campus walk-through; especially if it's a campus I didn't apply to and thereby didn't get rejected from. Having graduated college quite a few years ago now, it's nice to be in a place where so much learning is happening and all the people are young and stupid enough to make me feel better about my place in the world. After a jaunt through campus and the college bookstore to snag some Stanford swag, AS took me for my first In-N-Out Burger experience. 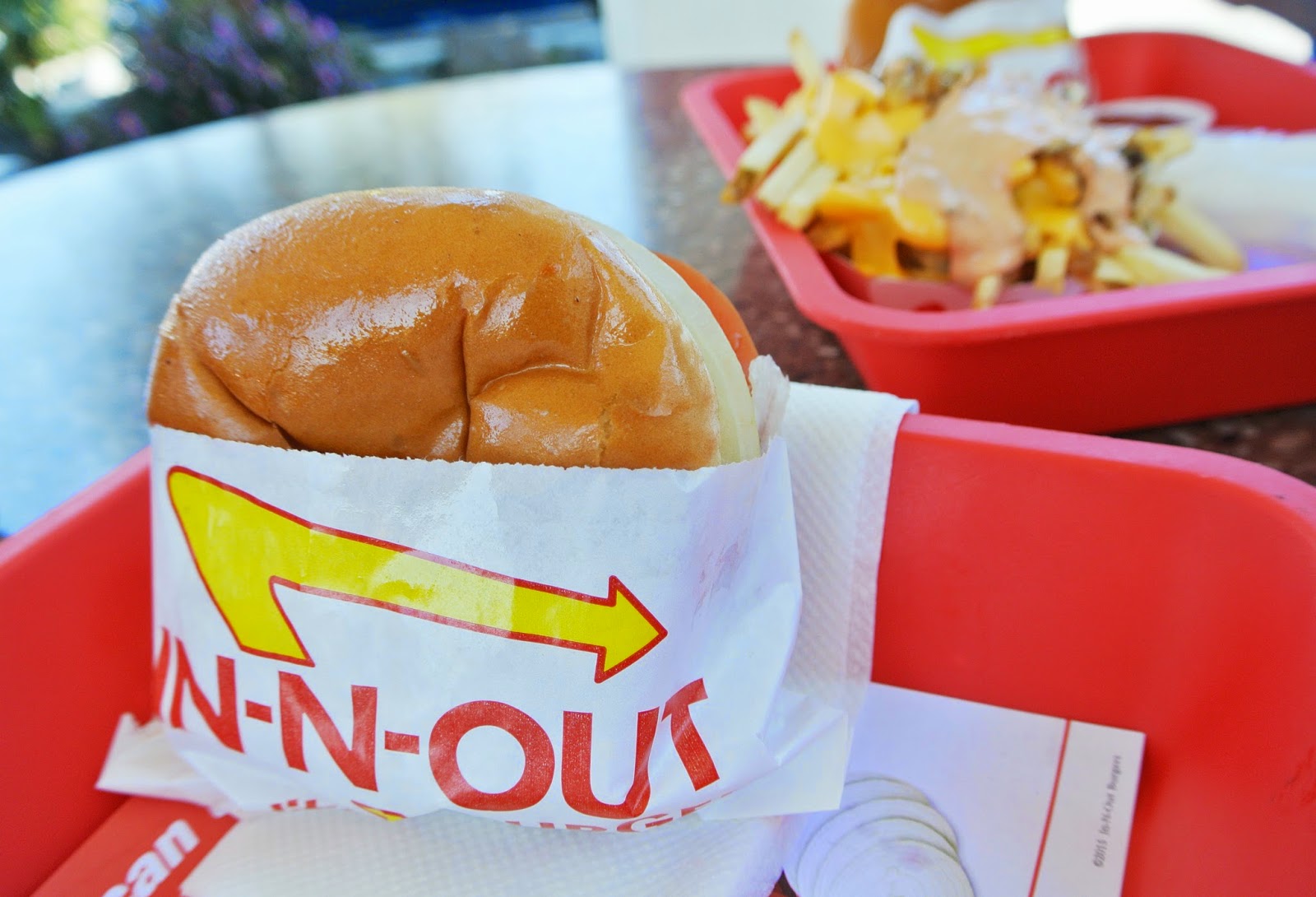 An East Coaster all my life, I had never had one of these burgers before, but they had been raised to practically mythical proportions by everyone I knew who tried them. I was interested to see what all the fuss was about. We had cheeseburgers and fries 'Animal style' from the 'secret menu' and...they were quite tasty! I liked that nothing was frozen and over-processed like it is at other chains, and that was a difference you could taste. At the very least I can now say I've had an In-N-Out burger! Do I sound like such a New Yorker when I say that? You can take the girl out of the city... 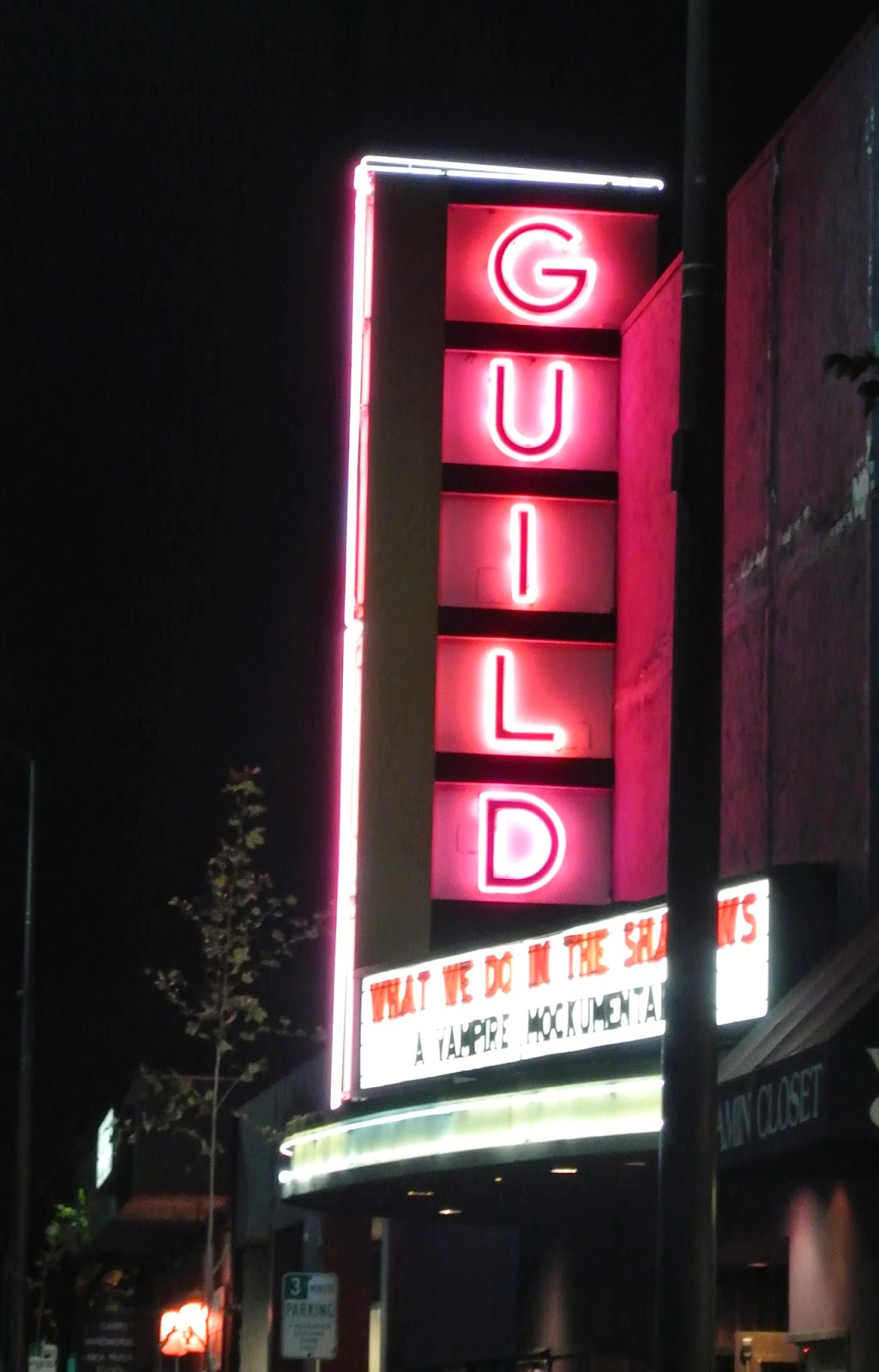 Our Target experience was next where I got not only a cute dress, but some leggings I had been needing for a while, hand lotion, and some juice. Where else can one do such a thing? Target is really one of the few things I miss about the spread-out, driving-heavy lifestyle. Don't get me started on SuperTarget.

Evening came and AS went off to work, which left me to nap (praise RuPaul!), write, grab some food, and then meet up with our friend SB. We went off to the lovely little Guild theatre--it shows just one movie at a time!!-- in Menlo Park, a short drive away, to see What We Do In The Shadows, the new vampire mockumentary. Not too bad for a day in the 'burbs, eh?

The following day took us back into San Francisco proper, specifically to The Haight. We took a nice long walk there from Union Square (about three miles), then lunched at a restaurant a woman told us about on the bus two days earlier, called Cha Cha Cha. Taking suggestions from strangers is one of my favorite pastimes, so it seemed like a natural fit. We dove into no-frills Mexican tapas in this joint decorated with shiny polyester fabrics and plastic beads, quenching our three-mile-walk-induced thirst with a giant pitcher of sangria.

Then we made a stop at a vintage store I had read about called Static. It was, by New York standards where a vintage concert t-shirt will easily cost you upwards of $50, reasonably priced. I found AS a stunning maxi dress printed with brightly colored fans that looked like it was made for her, and I walked out with a 1988 Michael Jackson BAD tour t-shirt, very, very happy and still a little drunk from the sangria. SF folks, if you like Static on Facebook you get 10% off your purchase!

Our long walk back of course took us to the famous Haight-Ashbury corner, which I was dismayed to find was, on one corner, occupied by a Ben and Jerry's, of all things. But I learned that the hippies had moved away long ago (on another corner was a RVCA), and the area read now a little like St. Mark's here in New York, full of people capitalizing on what it used to be. Not too long after, we rewarded ourselves with a stop for ice cream at Smitten, recommended to me by SD and SW. Smitten was founded by ice cream lover Robyn Sue Fisher and will prepare a personal scoop of ice cream for you on the premises by using liquid nitrogen alongside all-natural ingredients. I had brown sugar ice cream with cinnamon cookie crumble, strawberry prosecco syrup and homemade whipped cream. I forgot how many miles we walked almost instantly. That's not true, I had a blood blister and fiery calves that made me remember pretty quickly, but it was still really, obscenely creamy and excellent.

The evening brought a change of shoes, a purchase of Bengay from the Walgreens across the street, and a swipe of red lipstick for an evening out in North Beach. We met up with AS's friend who took us to a gallery opening at a space called The Emerald Tablet. This particular event featured not only artwork, though, but a 7-9 piece (depending on the whim of the musicians) band playing salsa, cumbia, and merengue tunes. A little old woman with bright cherry curls and a matching top shook her whole body joyfully offbeat while I attempted my best cumbia with one of the other girls in our gathering. Young men danced with old men danced with young women in front of tall vibrant paintings and we worked up a sweat. This kind of thing, after all, is what I really love to do when I travel--to see a place through the eyes of the people who live there. And if those eyes happen to be on a dance floor and surrounded by vibrant paintings, then I'm all in, baby. When we left, the vintage neon signs of North Beach lit our way back.


Posted by miss-manhattan at 3:36 PM No comments: