I seem to have the extroardinary? Unusual? Quite strange? luck of having all of my New York birthdays so far clash with the interests of the general universe. What I mean by that is, usually so many people are sick and cancel, or it’s on a Thursday so everyone leaves early, this one’s boyfriend’s head is bleeding, that one has to suddenly be in at work at 6am or, as in this year, there’s a hurricane.

So I was not holding too-high expectations for my birthday this year, given the fact that the tri-state area (if not more) was in a state of near-if-not-total, chaos. Trains from New Jersey were suspended, trains from Brooklyn were impossible, power was still out in parts of downtown. I was expecting a petite soiree this year. This is not to sound ungrateful, however! I knew that even if two friends showed up we would spend the night laughing and I was not wrong. Except more showed up and we really laughed into the night. It was, I must say, one of the best birthdays in recent memory.

I decided early on that this would be so. There were very few things I wanted from my birthday evening:
1) dinner out with my girlfriends
2) A birthday cake of my own design
3) A visit to see the Andy Warhol Retrospective at The Met
4) Champagne
5) SO MUCH LAUGHTER

We already know I got number four, but here’s how the other four went down.

1) Dinner with my Girlfriends
A success! Though originally I chose a different restaurant downtown, I conceded to an uptown establishment due to the stroke below 34th Street. But it ended up not being so much a concession as an equally wonderful delight! We got all dolled up and I even put on those special “these are cab-to-curb-only” gold heels I got in London. I can barely walk a block in them and the mere idea that I spent an entire evening wearing them in London one time actually blows my mind.

The restaurant I wound up choosing was Sel et Poivre, a charming French restaurant located on Lexington Avenue at 65th Street. Older couples surrounded the tables near us four ladies and we smiled. Escargot by the dozens! Duck l’orange! Pate! Cabernet! Delicieux! And a three-foot-long pepper grinder that caused each of us to cock an eyebrow toward the ceiling. Who would like some fresh pepper?

2) The Cake
Because really, how often does one have a proper birthday cake at a birthday soiree anymore? Not often enough, I say! So to The Food Emporium I went to order myself a cake: vanilla cake with white buttercream filling and frosting, red frosting roses and ‘Happy Birthday Elyssa’ also written in red on a petite circular cake.

“Oh, you’re ordering it for yourself!” said the woman behind the counter. Yes indeed, I was! I didn’t realize until then how rather out of the ordinary this was. Nevertheless, it was my birthday and I was going to do whatever I damned well pleased.

When I picked up the cake, the man behind the counter said, “Oh, why doesn’t your husband get it for you? Your boyfriend? Why you don’t have a boyfriend? You are so pretty!” Well, thank you sir, but I like to pick out my own cakes, with exactly what I want on them. Harrumph. Though I appreciate the compliment. I walked gingerly with the cake back to the apartment, thoroughly ready to scream at any wayward child loping irresponsibly down the street. Out of my way, small person! I have just purchased myself a cake and I PATENTLY REFUSE to have you ruin it for me, DO YOU UNDERSTAND?

Later that night, I realized I had no candles to light for myself and pulled out one from last year’s hurricane. Turns out it was a Shabbos candle. We are what we are. I lit the candle for myself and everyone sang happy birthday. So, okay, maybe it is a bit weird to get yourself a cake, put a candle on it, light the candle for yourself and then blow it out, but a lady’s gotta take care of herself, ya heard? You only get one 24th birthday, might as well make it as unusual as possible. 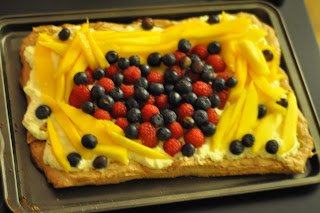 My dear roommate also made me a Pavlova for my birthday, topped with luscious cream and fresh fruits. It was a delightful treat and a scrumptious act of love. My home is usually bereft of any cooking supplies (a mixer, etc.) but SEP managed to make it work and produce a lovely, frothy, sweet concoction we all loved. It’s nice when people make things for you on your birthday. I am not brilliant in the kitchen, however, so for her next birthday I will have to practice making her a martini of some kind (Cosmopolitans are my specialty, currently, but I would be glad to expand my repertoire).

3) Warhol
The Warhol Retrospective opened at The Met in September, but I simply hadn’t gone yet. Knowing it closed on December 31, I knew I may not have another chance to see it, so I took myself there for my birthday (after having a yummy brunch of whole wheat pancakes, tofu scramble, potatoes, and veggie sausage patties near my house. Devoom!). I love all the bright colors Warhol uses in his work, and it was interesting to see all of the artists he also influenced since he first came onto the scene in the late 1950s, early 1960s. I was especially intrigued by Matthew Barney’s work, and was delighted to see a Maurizio Cattelan sculpture on display. There was also a chainsaw fashioned from Chanel shopping bags that I adored, though I can’t remember the artist currently. 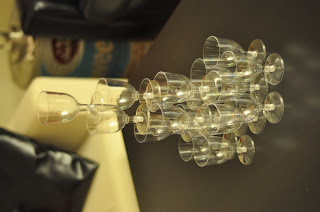 I went to the store and bought four bottles, one of them my favorite, Veuve Cliquot. Because every woman should have champagne on her birthday! It turns out I did not purchase enough, but luckily friends brought other bubbly beverages (including another bottle of VC! What luck!) and then it turned out to be just fine. And now I have one more bottle of champagne in my fridge. Because every woman should have at least one bottle of champagne in her fridge at all times.

5) SO MUCH LAUGHTER
It’s great when your friends all get along and have had enough personality drinks to really be even more interesting and hilarious than they already are. It’s especially brilliant when it’s complimented by the ‘Drinkin’ with my Bitches’ birthday banner one friend gets you (Thank you, AS!!). 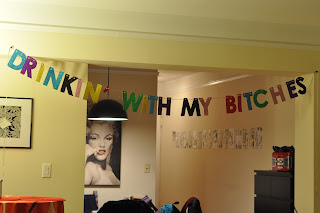 So, despite the hurricane, my petite birthday this year was a pure delight. Good things come in little packages, non?
Posted by miss-manhattan at 5:49 PM 1 comment:

For Better or For Worse

When you move to New York, you develop a strong bond relationship with the city, no matter the borough. As a New Yorker, you promise to love and cherish your city in good times and bad, in sickness and in health. When it hurts, you do your best to ease its troubles and when it falls, you make a promise to pick it back up. It is simply the commitment you make when you move here, whether you know it or not.

Last week, Hurricane Sandy whipped through the tri-state area, leaving over $50 billion worth of damage. Homes without power, businesses shut down, beaches and boardwalks destroyed, families displaced. Sadly, these are typical circumstances for any powerful storm and I have seen them in action before while living in South Florida, but seeing my new city in ruin, my adopted home a crippled shell of itself, was and is frightening.

Perhaps like most New Yorkers I do and always have put the city on a pedestal. The city that never sleeps, the lights that never dim, the people who toil endlessly in pursuit of their dreams because they know there's no other city on earth who can give them what this one does. New York City is one of the most powerful cities in the world--the epicenter of countless industries, the city where, truly, if you can make it here you can make it anywhere. Its power is also raised to mythical proportions, the city taking on a life of its own, a strong silent god-like figure glowing and beating in the heart of every New Yorker. The city could be filled with atheists and heathens, but everyone believes in New York--it is in itself a force of nature.

So to see this giant of industry, this giant of dreams, beat up by another force of nature, is unsettling. Living uptown, thankfully, we didn't experience too much damage. But downtown lost all of its power, it was flooded, it was completely dark--no heat, no water, nowhere to buy food. It was, as a friend said, a war zone.

On Friday, I took part of the day off of work to do what I could do give back. On a bus ride downtown (the subway service had only been partially restored at that point), I saw my favorite neighborhoods, often lit up with neon, with people and with taxicabs, reduced to ghost towns. In the middle of the day, businesses were shuttered up as tight as they would be around 5am. The bus ride downtown was jarring and I kept forgetting what time of day it was.

People lined up around the corners at shelters and churches for free coffee, diapers, food, and necessities. The National Guard and the Army were stationed giving out water on the Lower East Side. Volunteer groups went into housing projects to make sure everyone was okay and had supplies they needed--if not, they brought the supplies. Businesses opened their basements to clean and the air smelled of mildew. I could not will myself to take pictures of it all, for fear of capitalizing on others' misfortune, and my camera stayed in my bag.

The most unsettling, though, was to see army vehicles stationed up and down 1st Avenue near 14th Street. Covered in camouflage, they lined a few blocks in front of a grocery store. Soldiers in fatigues leaned against them, some took a picture with a little boy whose mother was poised and ready with her iPhone. At sweet as it was, it was also scary. Army vehicles in Manhattan? My city, she is not okay.

While power has for the most part been restored in Manhattan, it is still not back to normal. Many of the subway lines are running, but many are flooded and will be out of commission for weeks. After Katrina and Wilma, it took at least two weeks, if not longer, for everything to be back to normal in South Florida. And that is an area that is accustomed to hurricanes. It will be impossible to get gas, it will be impossible to get around the area as easily as we usually do, power may flicker, internet will be spotty, we will have to go to friends' houses to shower or even to have heat. It is what it is. But we survived, and we will have to persist with the knowledge everything will be back to normal eventually. Because it will. New York is not just built of concrete and steel and glass and whatever else buildings are made of. It is built of resilience, of rebirth, and that is one of the promises we all make to ourselves and to the city when we get here: that we will just keep going.
Posted by miss-manhattan at 8:02 PM No comments: