The Air Up There

I learned something very important about myself this past weekend:

I have excellent taste in music but I cannot read maps to save my life.

This seems to be a very 'Do you walk to school or carry your lunch?' scenario (thanks, mom), but it is in fact quite accurate. Let me explain.

Months and months ago, DL emailed me with a link to see the fabulous and wonderful cabaret performer Taylor Mac upstate (read: two hours north of the city) at Bard College in a town called Annandale-on-Hudson. Groupies to the core, we had been flirting with the idea of even driving to North Carolina to see him perform in a production of Cabaret, so this trip didn't ruffle a feather. Maybe we would do both! But ultimately the shorter trip won out. So, along with recent Taylor Mac convert SE, we popped ourselves into a Zipcar and headed north on a Friday evening. Responsible adults that we are, we left early so we wouldn't have to rush. Seated in the front, I was in charge of directions. Which was very easy to do when I had printouts in front of me, but almost literally impossible when using DL's iPhone to navigate. I am quite sure I deleted or erased the directions several times on the phone, inadvertently testing DL's patience in ways I'm sure only his middle school-aged students had to this point. Ultimately, I handed over the phone to SE for fear of mapping us off a cliff and stuck to my original job, choosing tuneage. At which I greatly excelled, thank you very much. 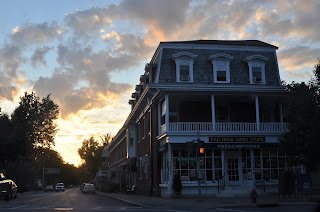 Map-ly challenged as I am, the trip was utterly delightful and, I feel, very representative of the way I like to take road trips. Did we stop at a greasy spoon or pizza joint on the way up? No sir! Rather, we found ourselves in front of a boat of sushi at Abis, a Japanese restaurant in a town called Thornwood. Continuing on, SE educated us in the ways of indie classical music (I especially enjoyed Gabriel Kahane, so thank you dahhhling for opening my mind and pouring good music into it). 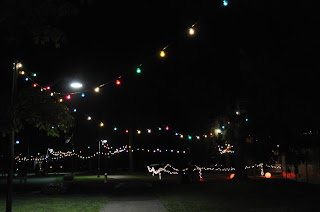 We drove and drove some more, getting close to Bard and coming across a petite street covered in brick buildings and white-bordered signs and country stores. I felt like I was on the set of Pollyanna, but in the best way possible. We get so used to seeing the same lights and signs and buildings after a while that we just forget there's life on other planets, as it were. That there are trees and stars and cool mountain air. That sometimes all the lights you need are billions of miles away and in some places it gets cool at night in the summertime. 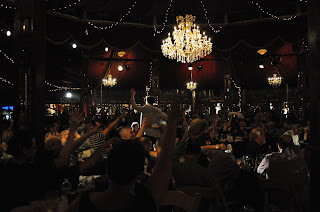 The pathway up to the venue, the Bard Spiegeltent, was strung above with colored Christmas lights, dotted below with pink, glowing round orbs to light the way. We ate homemade ice cream (vanilla with peanut butter and chocolate fudge, I died) and entered the lush purple tent, done up to resemble a luxurious, old-timey gypsy tent, decked out on the inside with a variety of wood paneling, golden carousel poles and sparkling white chandeliers. I drank a dirty martini and instantly felt at home. 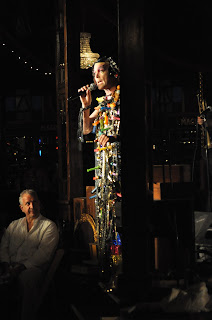 Our fair Taylor entered not too long afterward, clad in a homemade silver decoupage (?) re-imagining of the Chrysler Building. He sang tunes from the 1920s as a part of his 24-Hour History of Popular Music series, where he workshops songs from every decade from the 1770s forward. Eventually the workshops will be a 24-hour concert performed as an ode to imperfection. Like the several other decade workshops I have seen to date, the gender-bending cabaret god nailed it again: a perfect combination of song, storytelling, history, witty banter and oh-so-much glitter (not to mention a costume covered in Pez dispensers). I left feeling the way one feels after having a slice of cheesecake for dinner: pleasantly filled with all the right amounts of yumminess. I could describe more, but I don't want to ruin it for you--you should really go see the performances whenever they come through.

We walked out into the crisp summer night and I understood why people say you have to leave the city in the summer. The air felt like a sweet hug from a long-lost friend. Oh, is that what a breeze is? I daresay I felt absolutely smitten with the weather. Everything was right. The trip in the car itself even to stand outside in the fresh air was worth the trip, not to mention that we had the distinct pleasure of seeing a Taylor Mac performance on top of it. We trucked back to the car and I got us lost again on the map and put SE in charge. Not to worry, though. It was nothing a little Pixies couldn't fix. 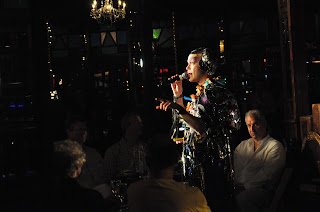 Posted by miss-manhattan at 12:21 AM No comments: