EH needed a night out. She came into the city from the far-away land of New Jersey, where she toils long hours as a medical resident. It was very much going to be a "screw boys, I just wanna dance!" kind of evening, though it had a few more pit-stops than perhaps we originally intended. As is listed in the title of the blog, though, it all worked out.

If I'm lucky, I get to see EH once a month, so dinner and chit-chat was absolutely necessary. We regaled each other with stories of our checkered romantic lives over burrito bowls at Calexico on the Lower East Side. If I may nerd out for a hot minute, I love the business model at Calexico: here, let us give you some delicious, high quality food at a lower cost and make up for the expense in volume so you, a young New Yorker, don't have to sacrifice taste for cost! Many thanks, gents; the cool weird young art folks in this town (yes, we still exist) appreciate you immensely. Everything I've ever had at any of the Calexico locations (it's not a chain, just multiple locations!) has been utterly delicious, be it their chipotle pork grits or their baja fish tacos, and they're easily one of my favorite restaurants in the city.

After that, the plan had been to go to see the rad free burlesque show at Hotel Chantelle--it goes on every Friday night, and the performers are excellent!--but it didn't work out for whatever reason. Ugh, what would we do NOW? I searched Time Out New York on my phone and remembered one of my favorite yearly events was on. "Hey, EH," I said. "You wanna get a cannoli?" Her resounding yes led us to the Feast of San Gennaro. I've gone every year (and perhaps have a written a bit about it every year?) since my dad told me it was something he used to do when he lived here. In that amount of time, I've learned where the good cannolis are--they're not at some stand offering you the false promises of "the best cannolis in New York" in an awful Comic Sans font; they're at Ferrara's. I mean, the restaurant been around since 1892, they must be doing something right, no? And they always set up their dessert stand right in front of their restaurant on Grand Street. Making our way down Mulberry Street and wading through the throngs of teenagers, thirty-something couples on dates and dads wearing their toddlers as backpacks, we eventually arrived and indulged in a few short minutes of crunchy, vanilla ricotta heaven. 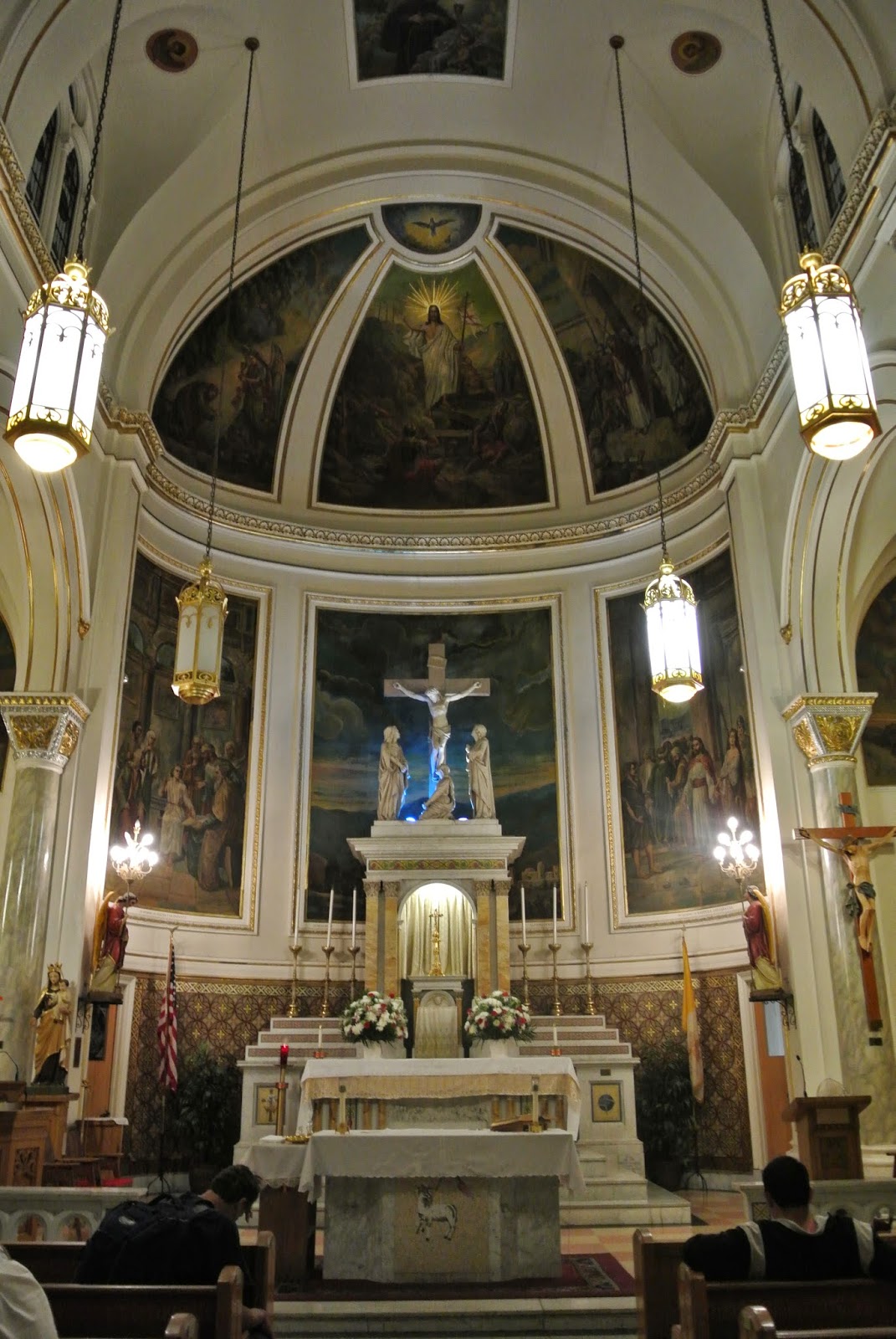 We walked up and down the streets a little bit more after that, eventually stopping in to the Church of the Most Precious Blood, which is the church where the San Gennaro shrine is located. I had been to the festival many times but had never actually been inside. Built in 1891, the church features a mural on the outside dedicated to all of the parishioners who perished in wars, beginning with WWI. On the inside, the furniture is wooden and reminiscent of the early 1960s, with red votive candles lining the interior. People kneel in front of them and pray. The interior itself is beautiful: it's a teeny little church with lovely murals on the inside, and I wonder about all the people who have gotten married here, and the role that this teeny little church has played in their lives. I take a few pictures and almost immediately stub my toe, as if god does not approve. I acknowledge his disgruntlement and we leave.

We picked out a place to go dancing and sort of wound our way there via Houston Street, turning left and right and eventually deciding to have a drink first instead. The bar was Emmett's, on Macdougal Street. The name was familiar and I discovered it was actually written up in New York Magazine for its desire to bring Chicago-style pizza to New York. A giant tray of deep pizza covered in thick red tomato sauce in front of the guy next to us was probably my first clue. We sat at the bar and chatted with the bartender, a nice guy who told us he and his brother (Emmett) moved here and opened the place about 10 months ago. The space was grungy in an elegant way, with a printed tin ceiling and Matisse books keeping the bottles company over the bar; it was the way I'd want a bar to look if I ever owned one. Every so often I'd sneak a peek at that pizza and it made me want to come back and try it next time.

Wined and beered, we arrived at our next location only to find that, though in fact there was a DJ playing some great music, there was absolutely...nobody there. In the entire bar. Befuddled beyond belief, we skipped out of there pretty fast and hopped in a cab to our old standby, Solas in the East Village. Yes, it is filled with post-grad frat boys in button-down shirts and even guys in t-shirts who will ask you to do a shot of Hennessy with them (what???), but at the end of the day, there's no cover, they play good top 40 jams, nobody bothers you too much, and we always have a good time. So we shook our stuff for a couple hours and by 4am we were home.

Rise and shine around...noon? and we think about a plan of how to get to the Brooklyn Museum, but instead decide on the Museum at FIT for their Exposed: A History of Lingerie exhibition. Fun fact: the Museum at FIT is *free*, and if you ever want to do some great people watching during the week, their students come up with amazing outfits. I remember one time I went to meet a friend as he got off his Megabus and it was like a parade of really cool kids with candy-colored hair and platform boots all being awesome together. Anyway, much to our surprise, we arrive and not only is the exhibition on, but another is as well: on Dance and Fashion. Dance nerds to our cores, we are delighted, especially since it's the opening day. The delight doesn't stop there, though, because very soon I realize that the introductory photo of the dance exhibition was shot by the photographer I assist on occasion, the supremely rad Erin Baiano. I gasp and giddily slap EH's shoulder: "OHMYGODOHYMYGODOHMYGOD!"

I immediately pose for a picture with this giant rendering of Erin's work like a big huge nerd and I don't even care. And yes, I enjoyed the exhibitions that day (I wanted nothing more than to lounge about my house in fine lingerie and/or go the ballet afterward), but absolutely nothing compares to how much fun it was to see her photographs larger than life on the walls.

After the exhibition, we stop in a tiny coffee shop. I'm dragging, and I promised to take the night (again!) with my roommate, so I need a pick me up, preferably in the form of a black tea with milk and a Splenda, thank you very much. Walking to the train, we see this little spot called ALT, short for A Little Taste. Inside, it's beautifully decorated, with stylishly rusted metal furniture, silver metal pitchers for milk, mason jars for tea, open cabinetry and textured concrete behind the register. It's lovely to look at, and it's affordable, too! It turns out this coffee shop is actually the front of an interior design showroom, that of Analisse Taft-Gersten. The gent behind the counter tells us that she loved the coffee of Long Island Coffee Roasters so much, she invited the fella who started the company, Greg Heinz, to set up shop in her storefront. It's such a lovely idea, and so nicely executed, too. When I'm back in the Flower District, I will undoubtedly be stopping by again.

So I was feeling jaded about New York, was I? It's almost like the city noticed and granted me some little gifts, some happy accidents, so I can continue seeing it with new eyes. It can be a challenge to do, assuredly, but to sometimes to see something new all you have to do is look.
Posted by miss-manhattan at 2:42 PM No comments: