There’s a certain feeling you get when you hear a completely perfect sound. It starts at the tops of your shoulders, then runs up and down your arms, prickling your flesh and making  the hair on the tops of your arms stand up. There are tons of places one might expect to hear such sounds—on Broadway, at the Opera, in a recording. And in a gay bar in Hell’s Kitchen on a Monday night.
On a busier night, like a Friday or Saturday, there’s a line of people, mostly men with the occasional woman, waiting to offer up their IDs to the bouncers in front of the black, unmarked façade of Industry, on 52nd Street between 8th and 9th Avenue. Tonight there’s none, save for a few men smoking behind velvet ropes. Two them are young men in short shorts and canvas loafers, hair messed boyishly with just the right amount of product, cigarettes dangling from their lithe, manicured fingers. They speak with the lilt of high school valley girls about who’s on the bill tonight, taking drags of gossip between inhalations.
At Marty Thomas’s DIVA show, the ladies always on the bill are the accomplished and talented Kelly King, Kat Hennessey, Anne Fraser Thomas, and of course Marty Thomas himself. Each has performed around the globe in shows like Wicked, Xanadu, and Cirque du Soleil; they’ve won Grammys and topped the Billboard charts. And on Monday nights at Industry, they don only their most sparkly attire and present their voices to you for absolutely no cover.
TL originally took me to Industry to see DIVA, and I could not believe my ears. It was only in the theatre that I had previously heard such voices, belting powerful notes high and mighty. But on a tiny little stage in the back of a gay bar, I was treated to a sassy, silly, perfect little show where all four divas sang the greats—Whitney, Cyndi, “And I Am Telling You” from Dreamgirls, “Defying Gravity” from Wicked; you know, the things divas sing. Because you might be able to hit some notes honey, but if you can’t bring it home then get off the stage.
Luckily, all of the divas bring it, free performance or not. Marty, the charismatic producer and emcee who Time Out New York once called ‘a human spangle’, hits notes I thought impossible for a man but still manages to make them sound impeccable; Kelly is a teeny woman in big ol’ stilettos whose voice is the flawless stuff of dreams; Kat is a redhead with a sweet, friendly belt; and Anne is another sassy belter who loves the crowd.
There is big, glamorous hair, shimmering stage makeup, shiny costumes, choreography, lights, a disco ball, the works—it’s nice to know that even though this is a smaller show in a gay bar, the performers take it seriously enough to put on a good, practiced show, but still have enough fun with it so the audience doesn’t feel ashamed to hoot, holler, snap multiple times in a row, and say “YES, BITCH!” and “WORKKK!” when they’re blown away by the performers’ sparkling high notes.
It’s the kinds of shows like this that are possible in places like New York, where people just love what they do and want to share it with others. The singers are a part of a tight-knit community of performers that support each other and come out to see each other no matter where they are (I was pleasantly surprised to find that several Broadway actors were in the DIVA audience along with your humble Miss Manhattan, snapping and shouting away with love at their favorite diva).
Thomas started the show to bring together fantastic entertainers from all across the New York performance scene, be they from cabarets or the Broadway stage. As he says in the DIVA promo, “I thought I’d bring my closest friends, who sing higher than anyone I know…” The rest falls together wonderfully, with Marty, the talented ladies and a weekly guest diva putting on a fun show that’s worth far more than you’ll pay for it. It’s delightful, it’s sparkly, it’s fierce. It’s DIVA. 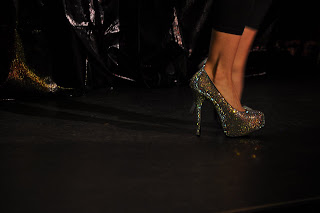 Posted by miss-manhattan at 1:18 AM No comments: