Galifornia, Part III: A Mission, A Castro, An L.A. Woman

I'm gonna narrate this one in photo form...enjoy! 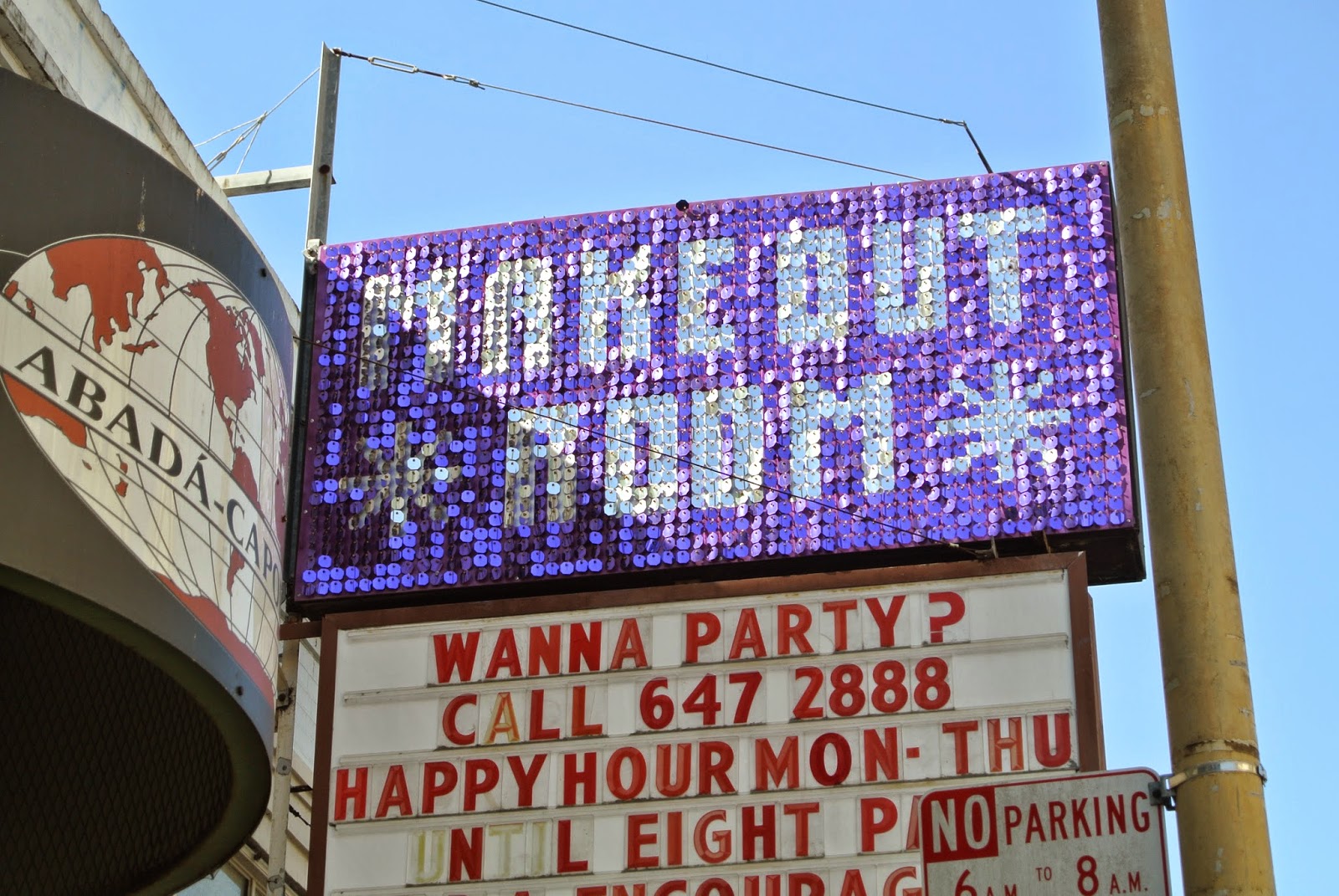 My last day in San Francisco brought us to the Mission. We began with a breakfast at Boogaloos, a neighborhood staple since 1994. This brunch joint is decorated with album covers all featuring some variation on the phrase 'boogaloo.' Over polenta with eggs and french toast, we discussed gentrification in the neighborhood. You can learn more about that here. The Make-Out Room, above, is a club and concert venue in the area. 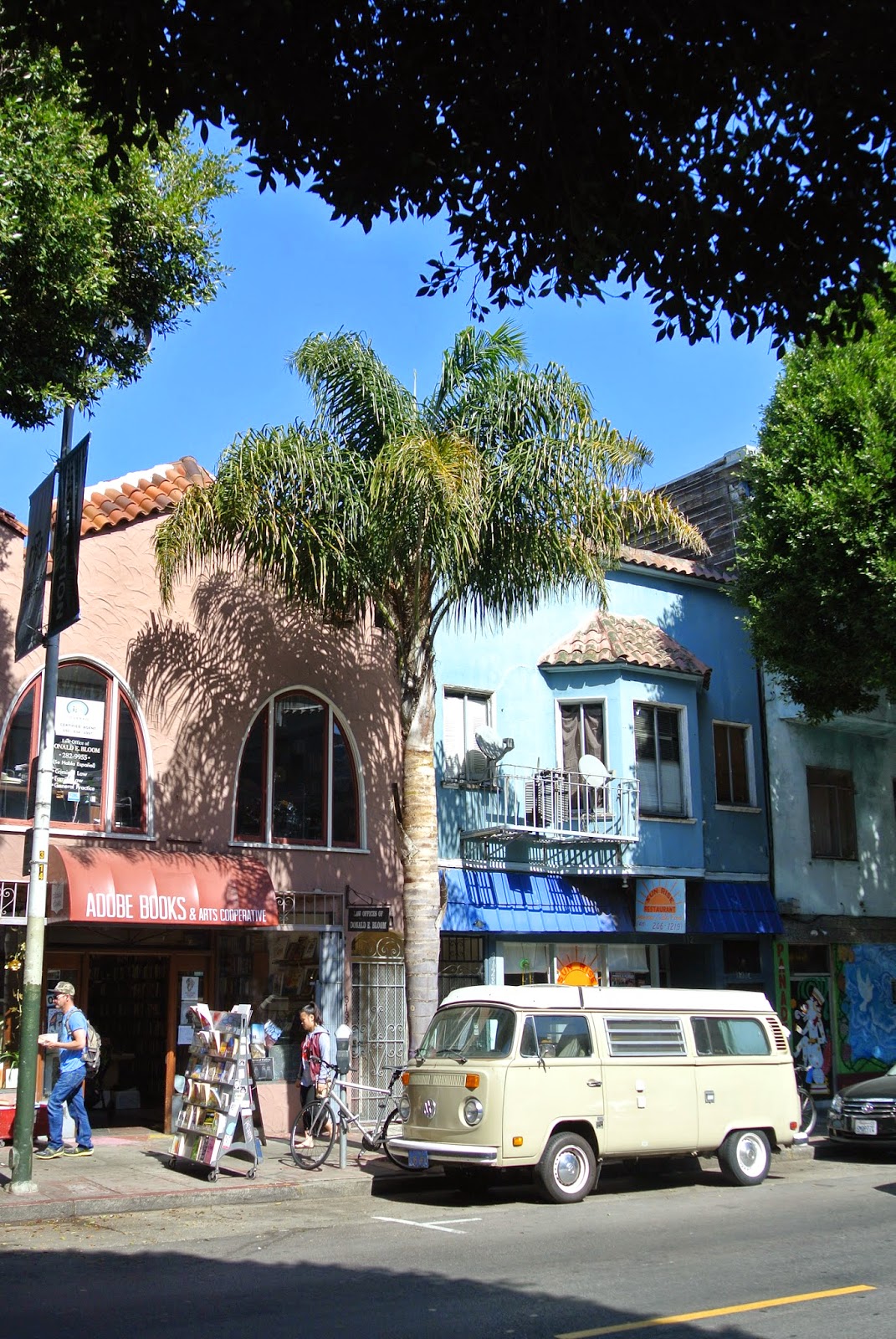 Walking through the Mission, there's a host of wonderful independently owned businesses like secondhand bookstores, traditional bakeries of all ethnicities, and an old-school coffee joint or two. There are also those tell-tale signs the aforementioned gentrification--overly minimalist coffee houses serving $5 cups, farm-to-table bistros serving $5 slices of pie (really? come on, guys...), and juice bars. Just like the East Village in New York became the playground of one too many yuppie types who have little to no regard for its punk roots, the Mission is feeling the beginning of a similar heat. Residents regularly speak out against the changes through a variety of community efforts, sometimes even through murals on the neighborhood's main streets. A number of murals like these also appear down Balmy Alley (photos below), where residents have created artwork depicting their dissatisfaction (to say the least) with the skyrocketing rents and loss of community and history. 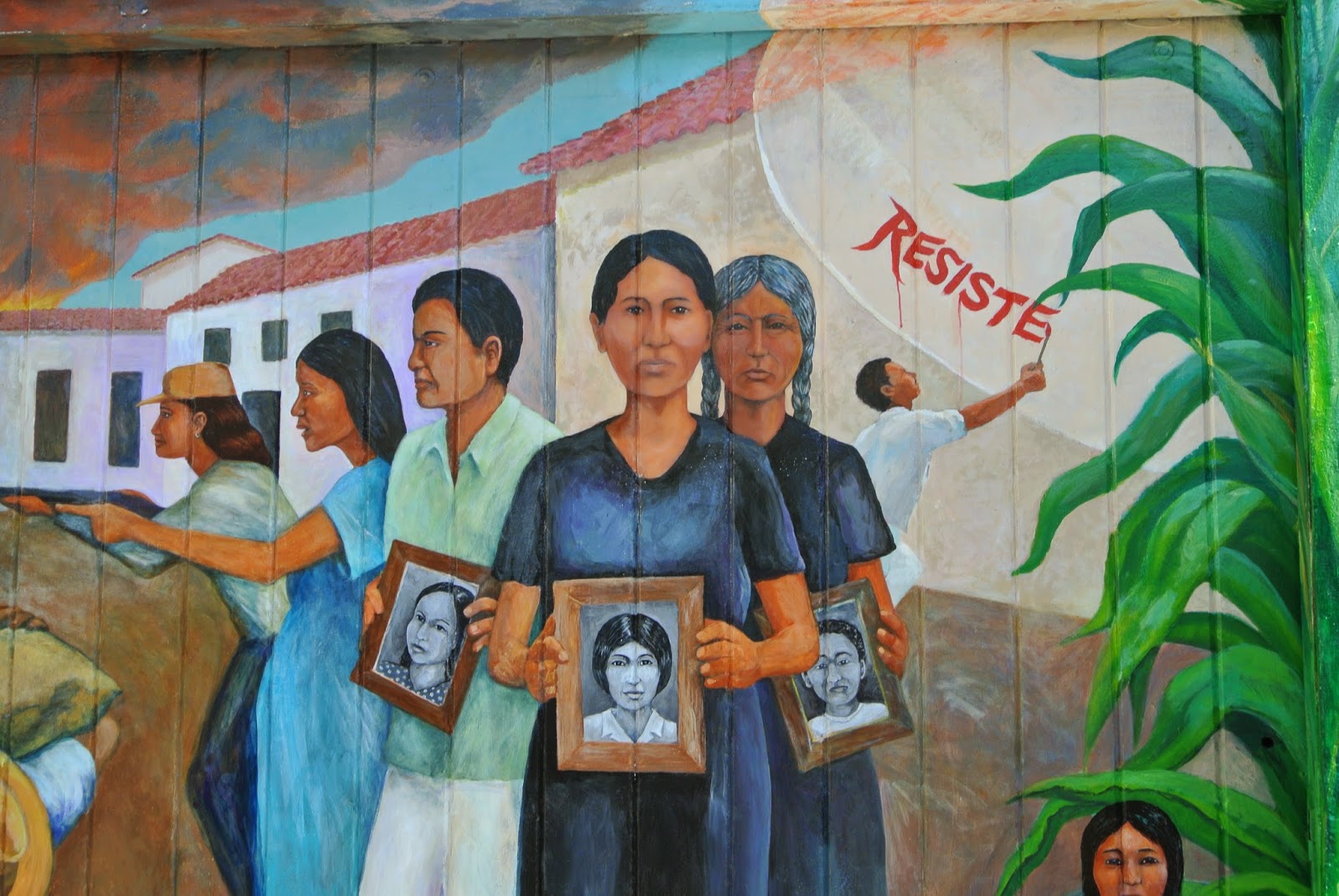 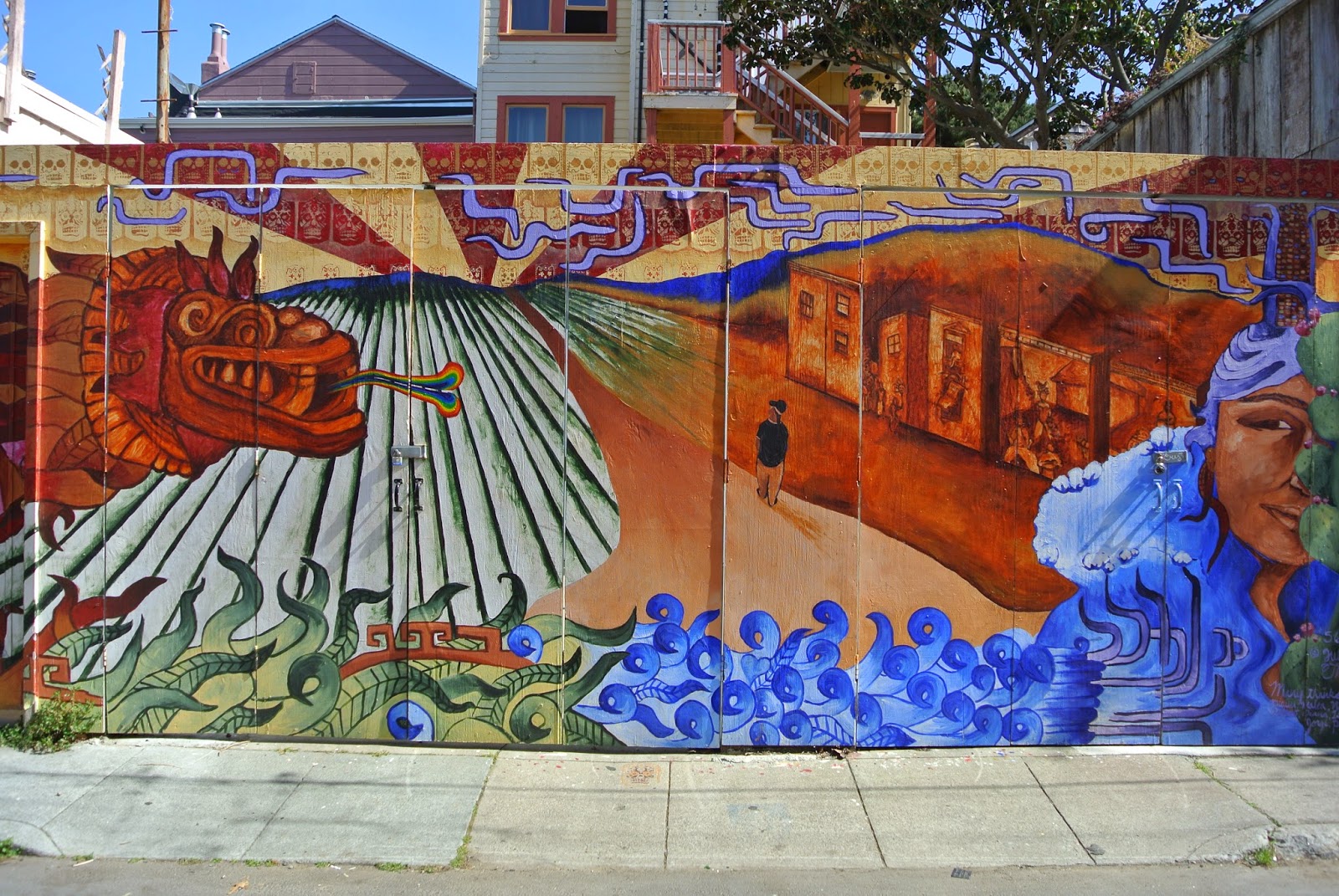 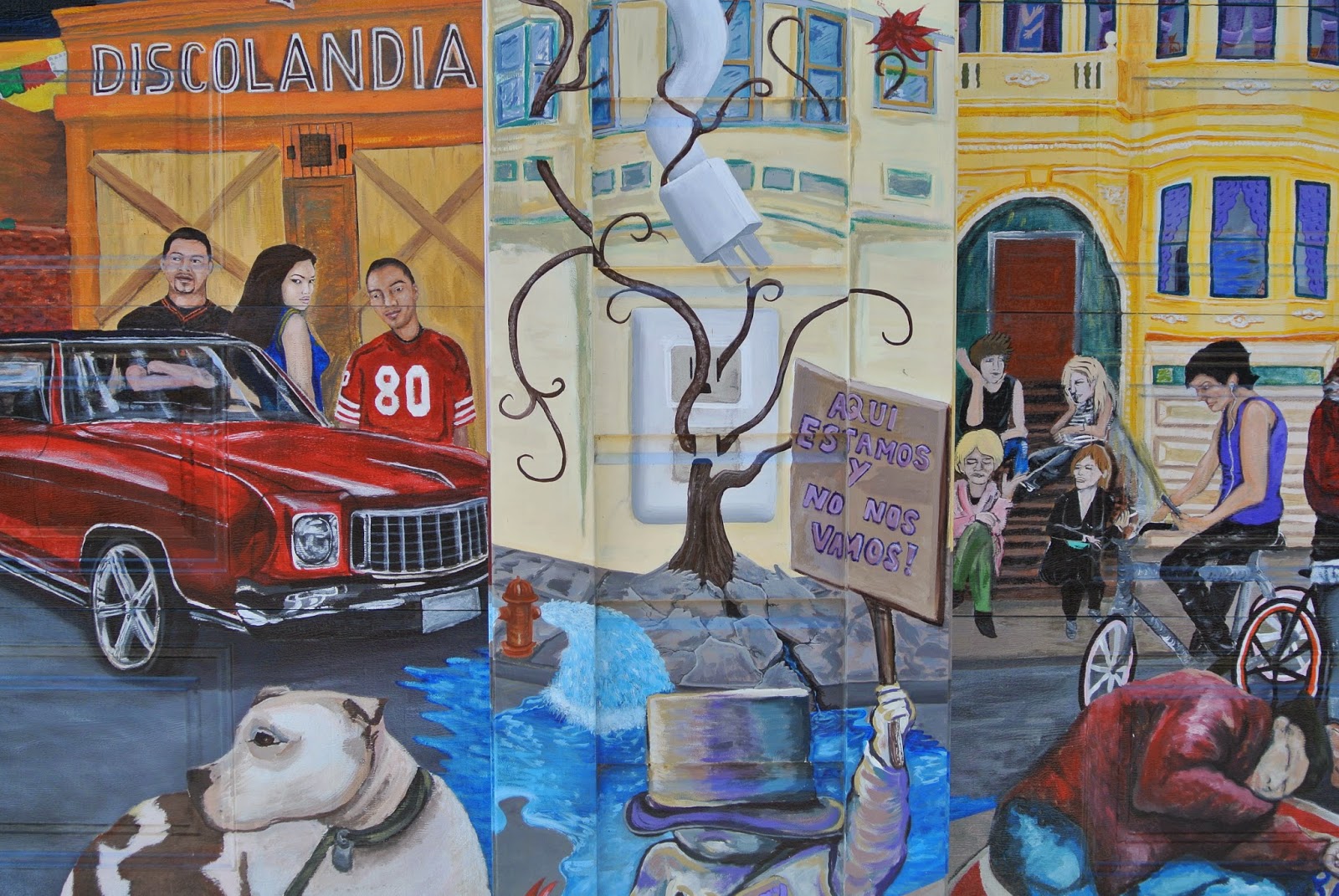 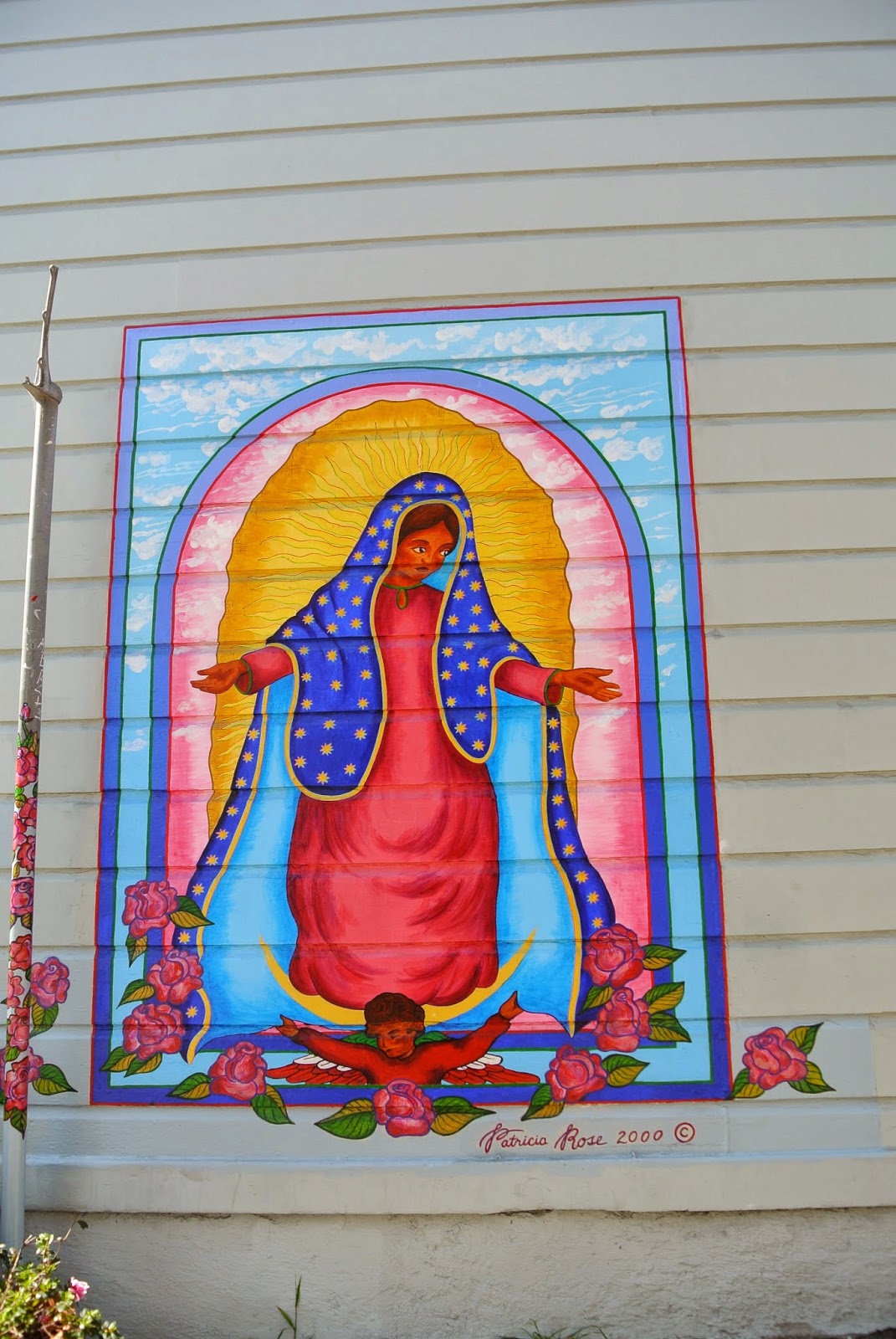 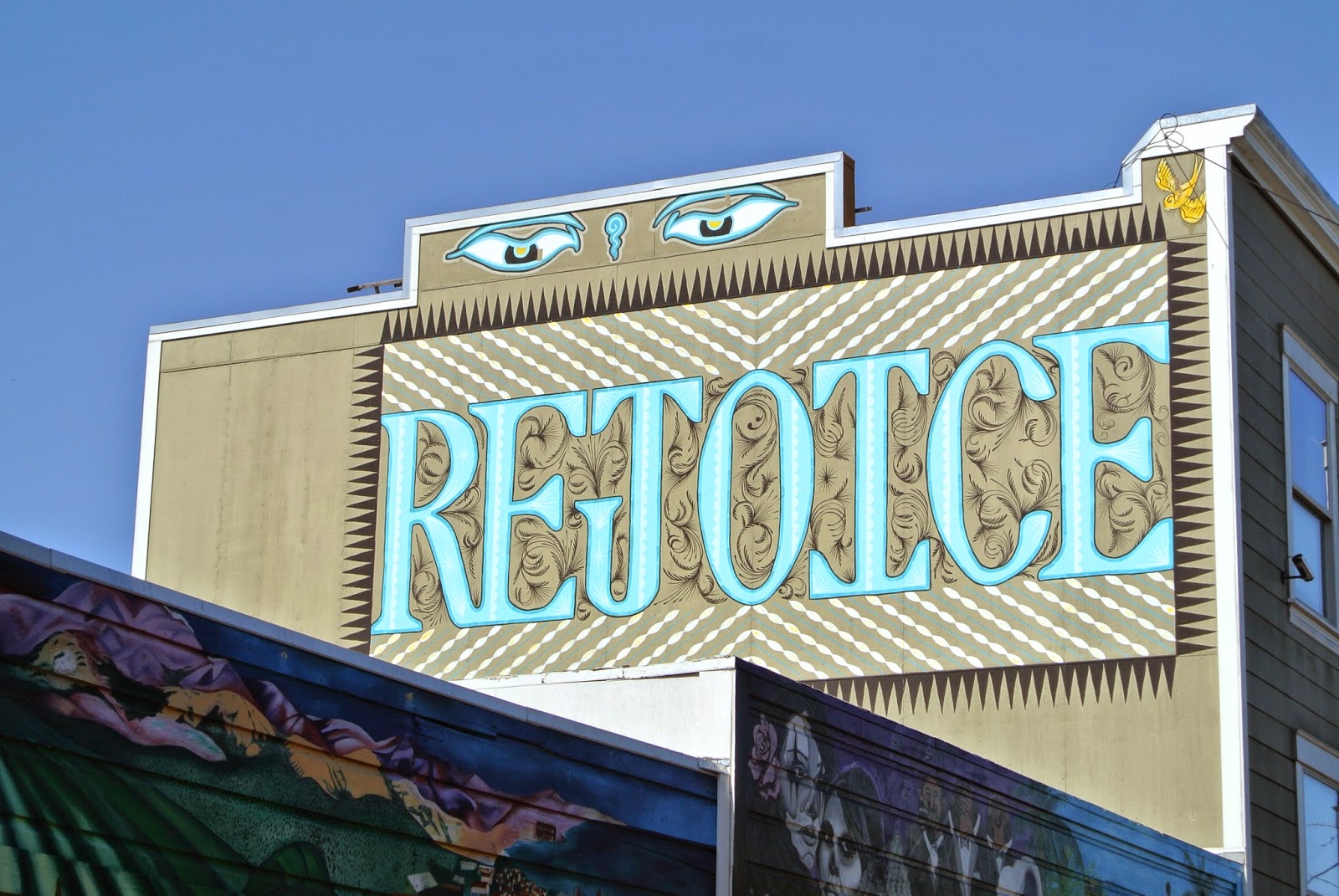 After visiting Balmy Alley's bright and powerful murals, we went to Dolores Park to meet up with SC, who I hadn't seen since high school. He invited us to join a crew of his hanging out there that day. Dolores Park is the San Francisco equivalent of Sheep's Meadow in Central Park, where it feels like every 20-something within a five mile radius has set up camp for the afternoon. People sit on blankets, drink beer, hang out with their dogs, listen to music, get really stoned after both taking a hit of the biggest joint they've ever seen and eating half a weed chocolate truffle. You know, the usual. I'm told this is a very San Francisco experience, especially when you follow it up with giant burritos from the classic Taqueria El Farolito as we did. 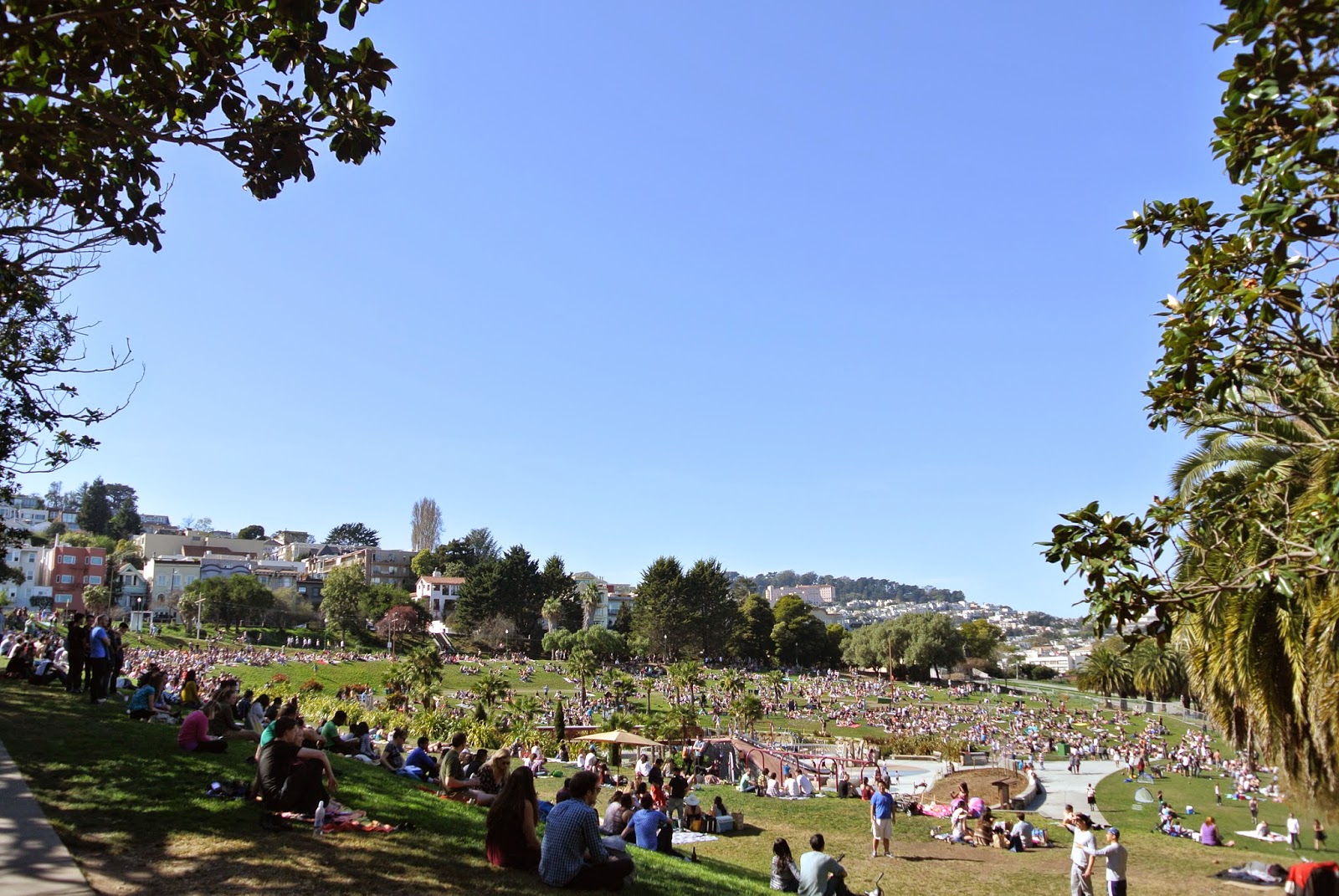 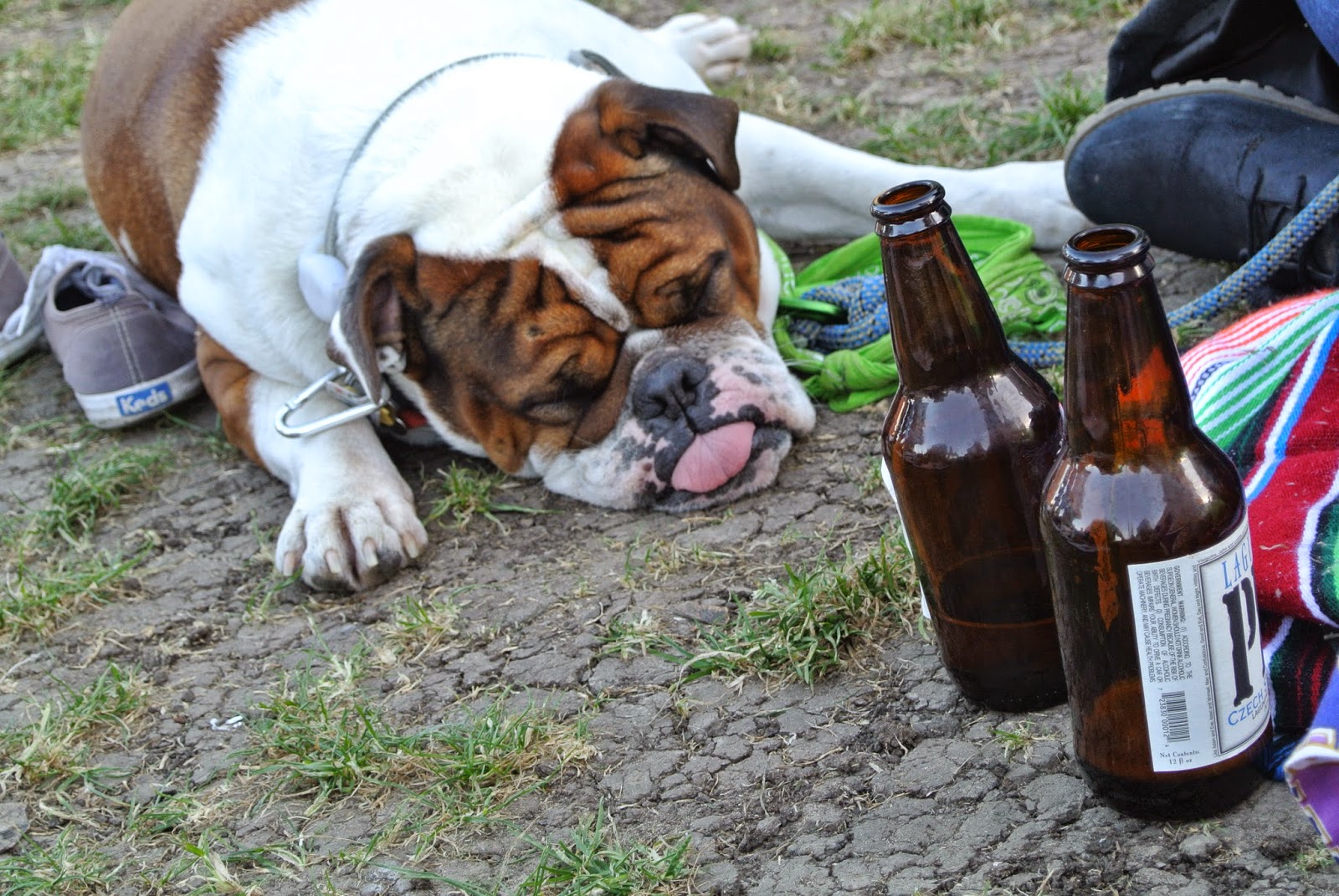 Making our way home, we ended up caught in a giant crowd watching--but mostly just shoving their way through to get elsewhere--the Chinese New Year Parade. AS and I tried to hold on to each other tightly, but we got separated at some point after my shoulder popped in and out of its socket (don't worry, this happens to me relatively often because my joints are crazy). Eventually, we found each other at the end of what seemed like a tunnel of people and found our way inside. We had a pretty sweet view of the parade from up above, like this dragon! 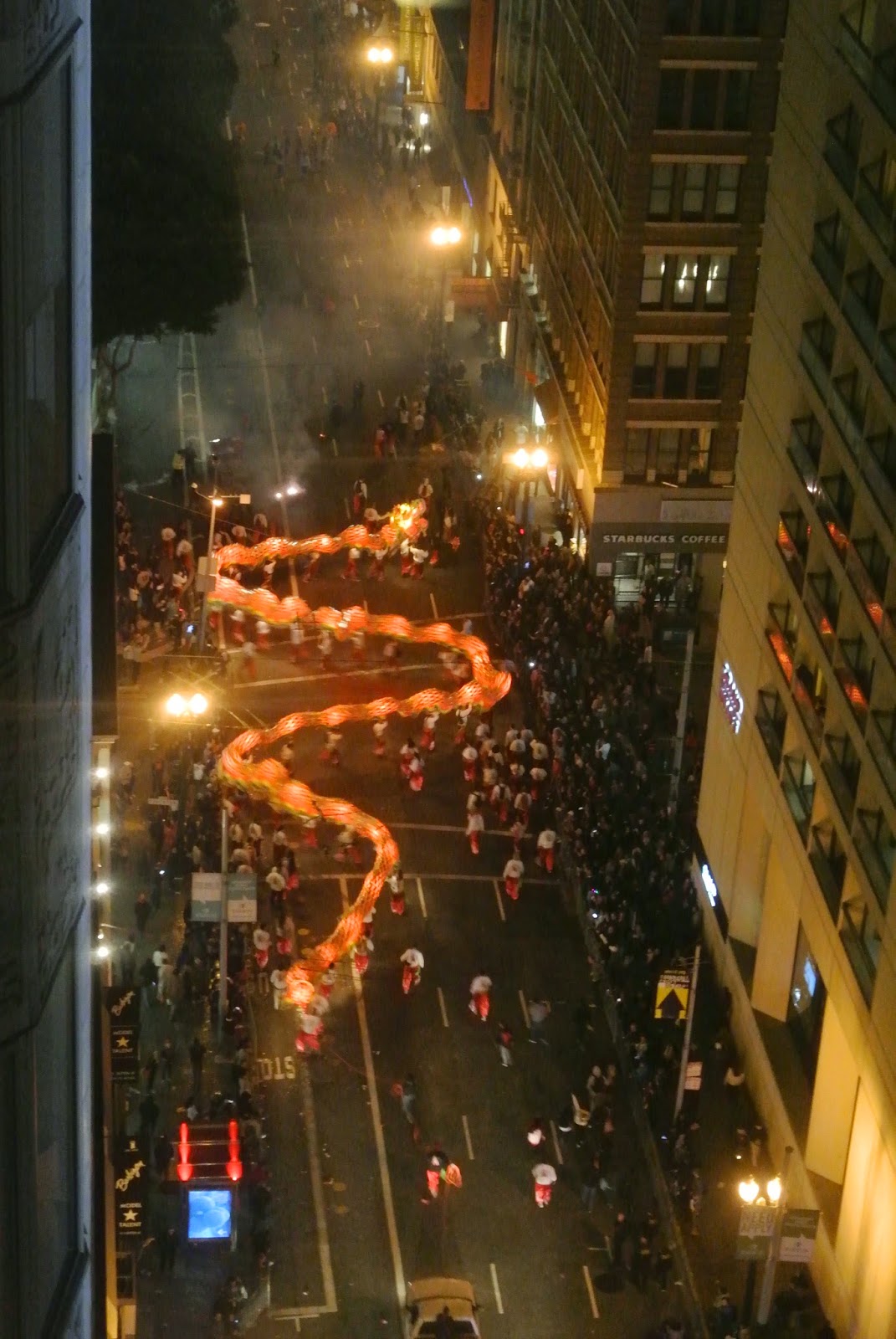 We relaxed for a bit and then found our way to meet up with the incredible JH in the Castro, San Francisco's gayborhood. On the way there, JH texted me to ask if I would like to be greeted in heels or light-up sneakers. I thought he was joking, but when I arrived he pulled his four-or-five inch heels out of his bag. Long and lean, he and his fabulous legs towered over us, a smash of blue eyeshadow on his face and a Virgin Mary tank top over his chest. Stick a fork in me, I thought, because I am DONE. I had just deliciously died and gone to heaven and JH was at the Pearly Gates to let me in. But then we took the dance floor--nay, JH took the dance floor and made it his bitch, swirling his luscious legs as we danced to Kylie, Madonna, Beyonce, Britney and of course Mother RuPaul herself. I doubt I will ever see anyone drop it and pick it up like that ever again in my lifetime. 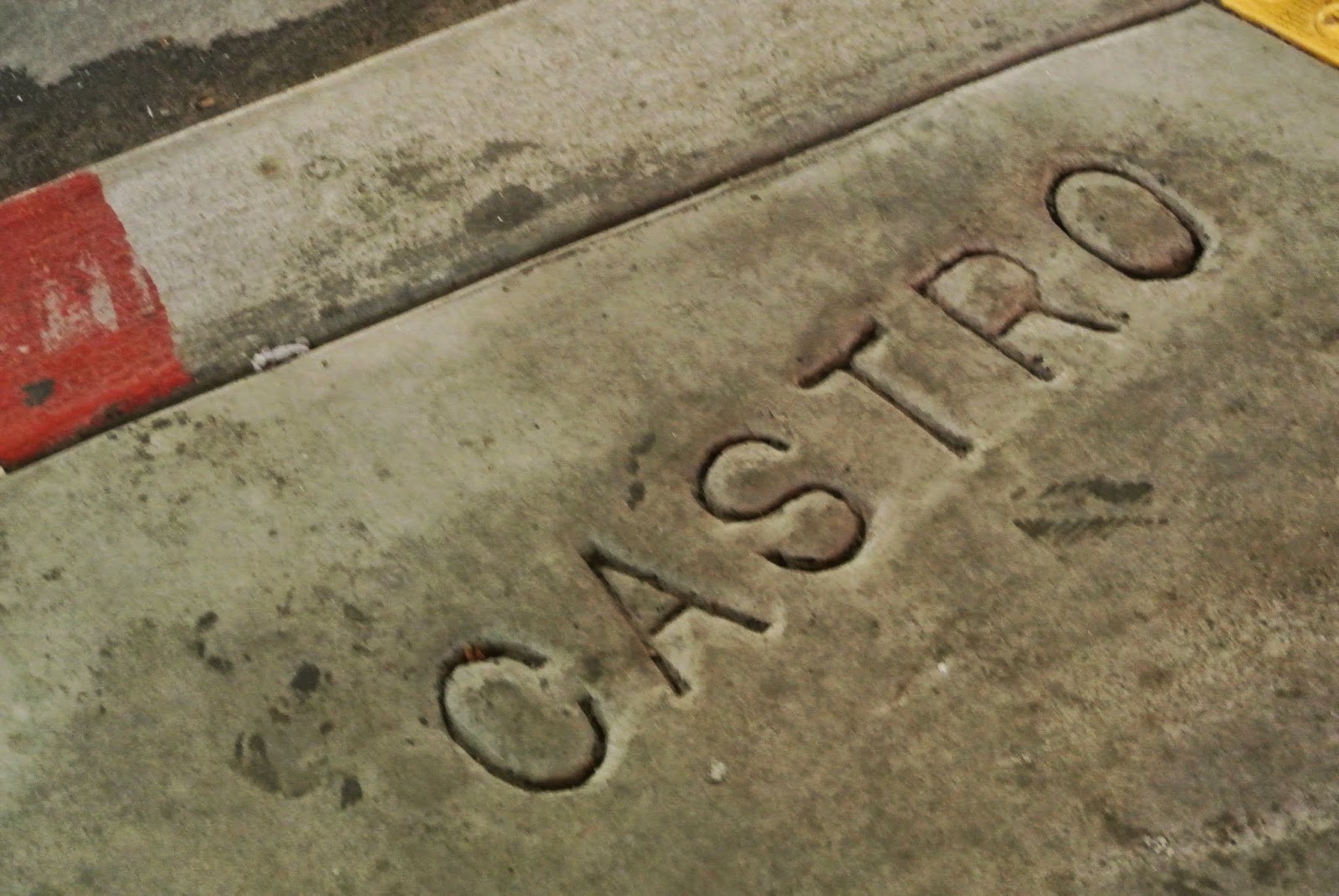 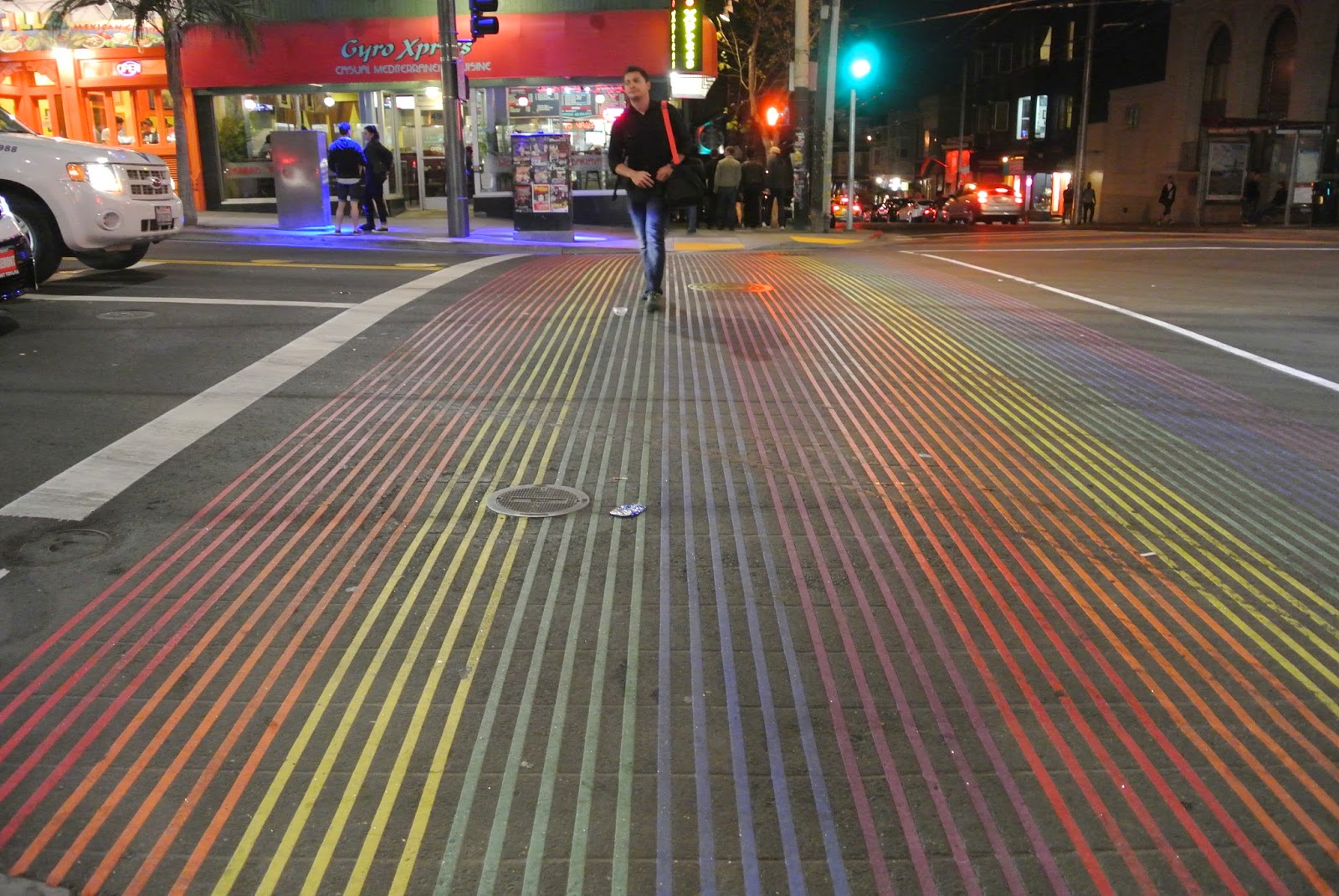 The next day I was off to Los Angeles, but not before we took a brief trip to the rather hilariously named Ocean Beach for view-having and milkshakes. 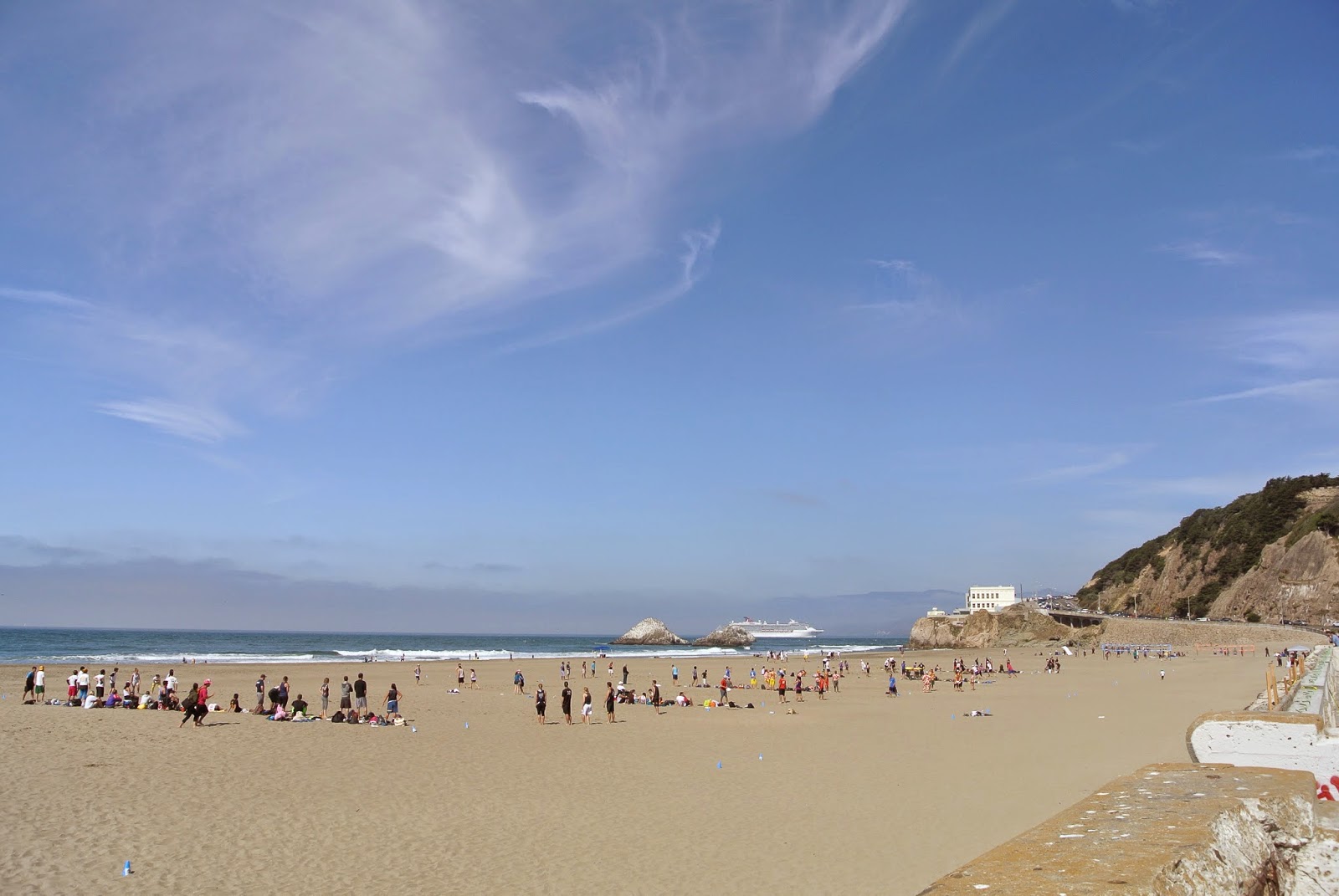 Arriving in L.A. the wonderful GD picked me up from the fucking crazy airport at LAX. Fun fact--there are no taxi lines and all the cabs fight with each other and with regular traffic to find customers. It is quite literally a shitshow. There was no way I was letting her take me back there for my return flight to New York.

Before heading to GD's home we dined at the lovely Black Cat. Veggie tapas and gossip were the order of the day. Both tasted delicious, especially the burrata with haricot verts. It's really lovely to catch up with GD in person and hear about all of the amazing stuff she's doing in Los Angeles. You should check her out too (here and here). We've now been friends for nearly 11 years and now that she lives far away I value the time I get to spend with her even more.

Post Black Cat, we hang out with a grey cat, the love of GD's life, her cat Alabama Worley (so named, of course, after Patricia Arquette's character in the Tarantino classic True Romance) and watch the Unbreakable Kimmy Schmidt on Netflix. 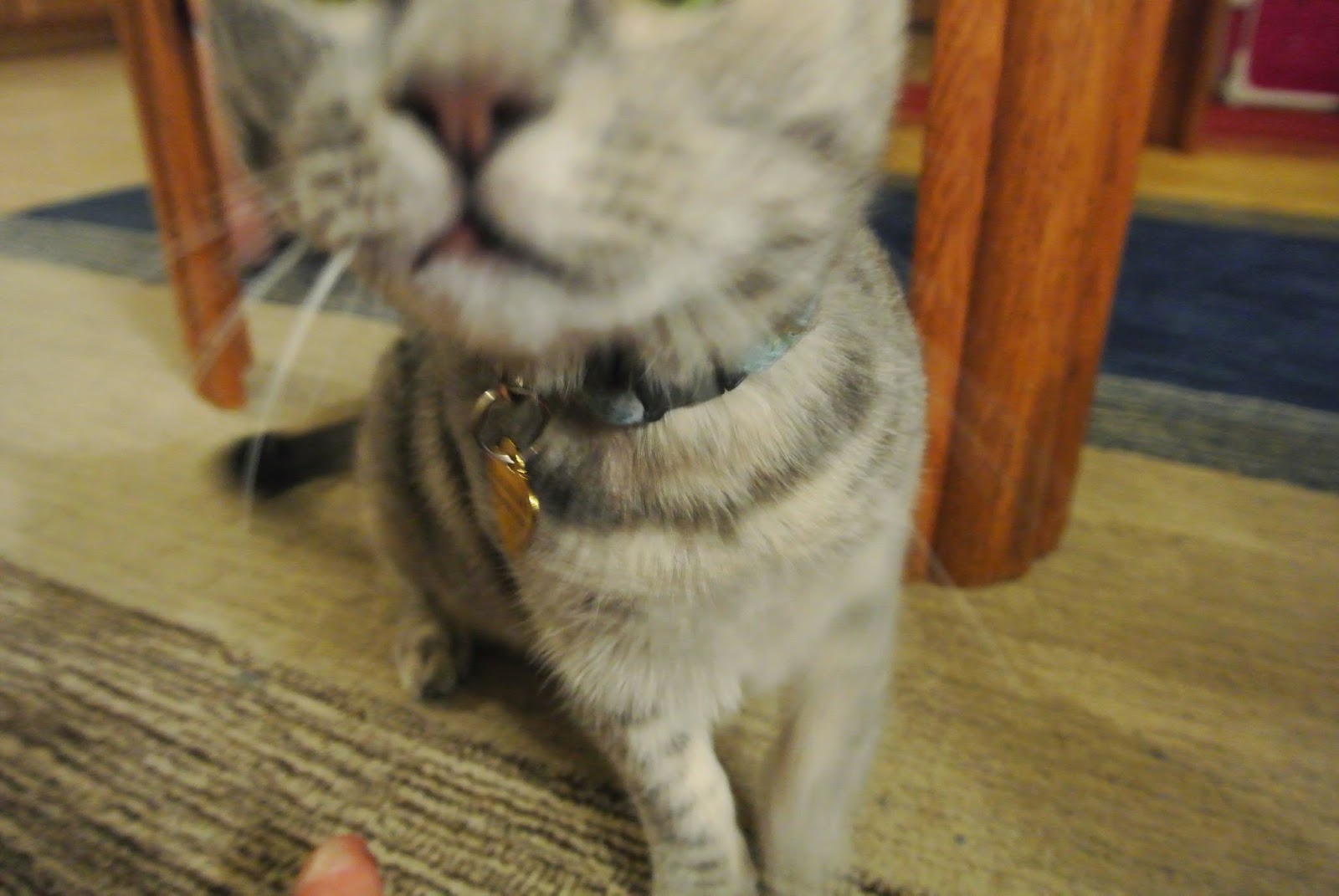 The next day I hang out with GD at her office at Buzzfeed Studios. The company converted an old grocery store into an entire soundstage with several sets and prop storage. Most of the Buzzfeed sketches you see online are filmed here. Below is their bar set and one portion of their costume/prop area. 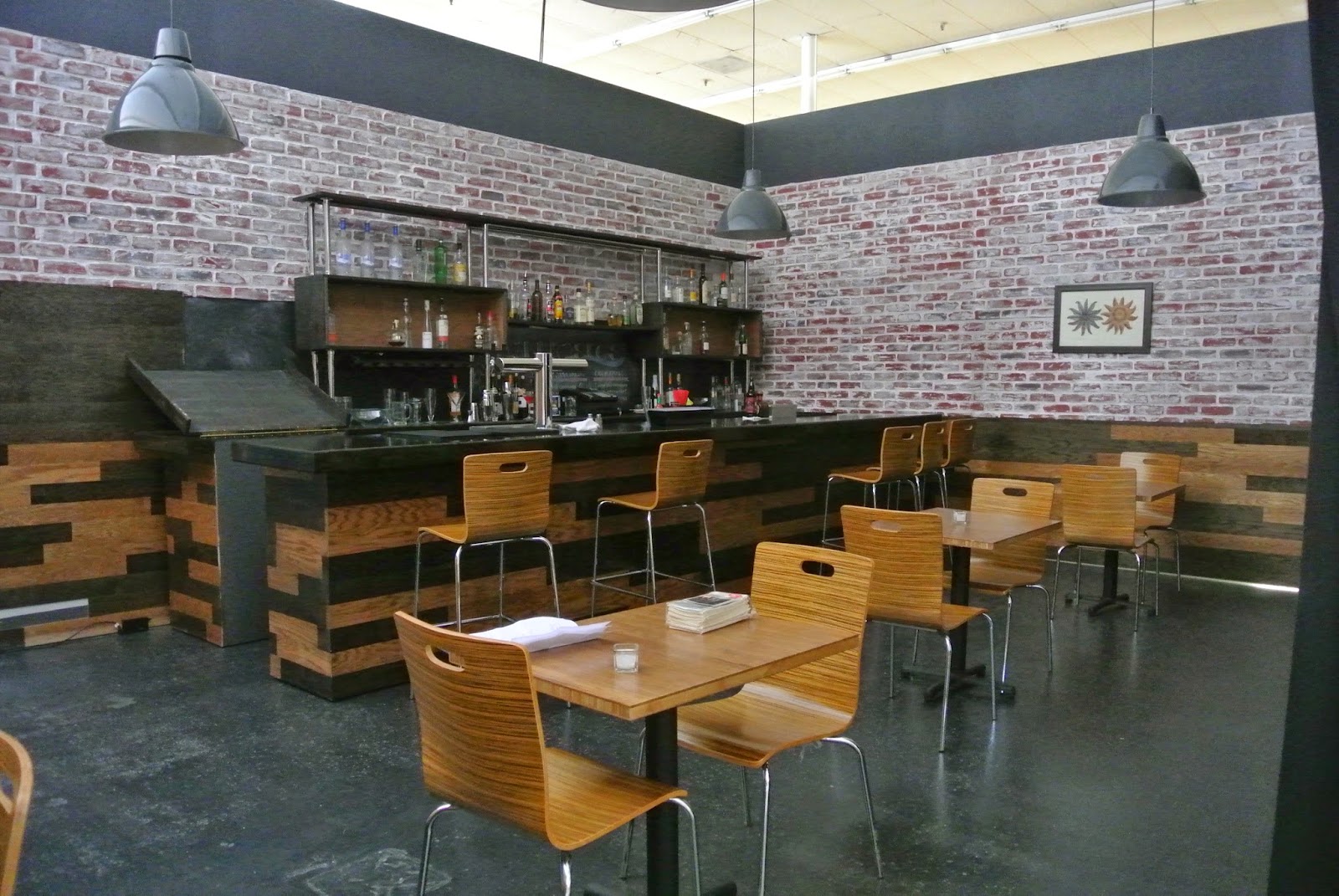 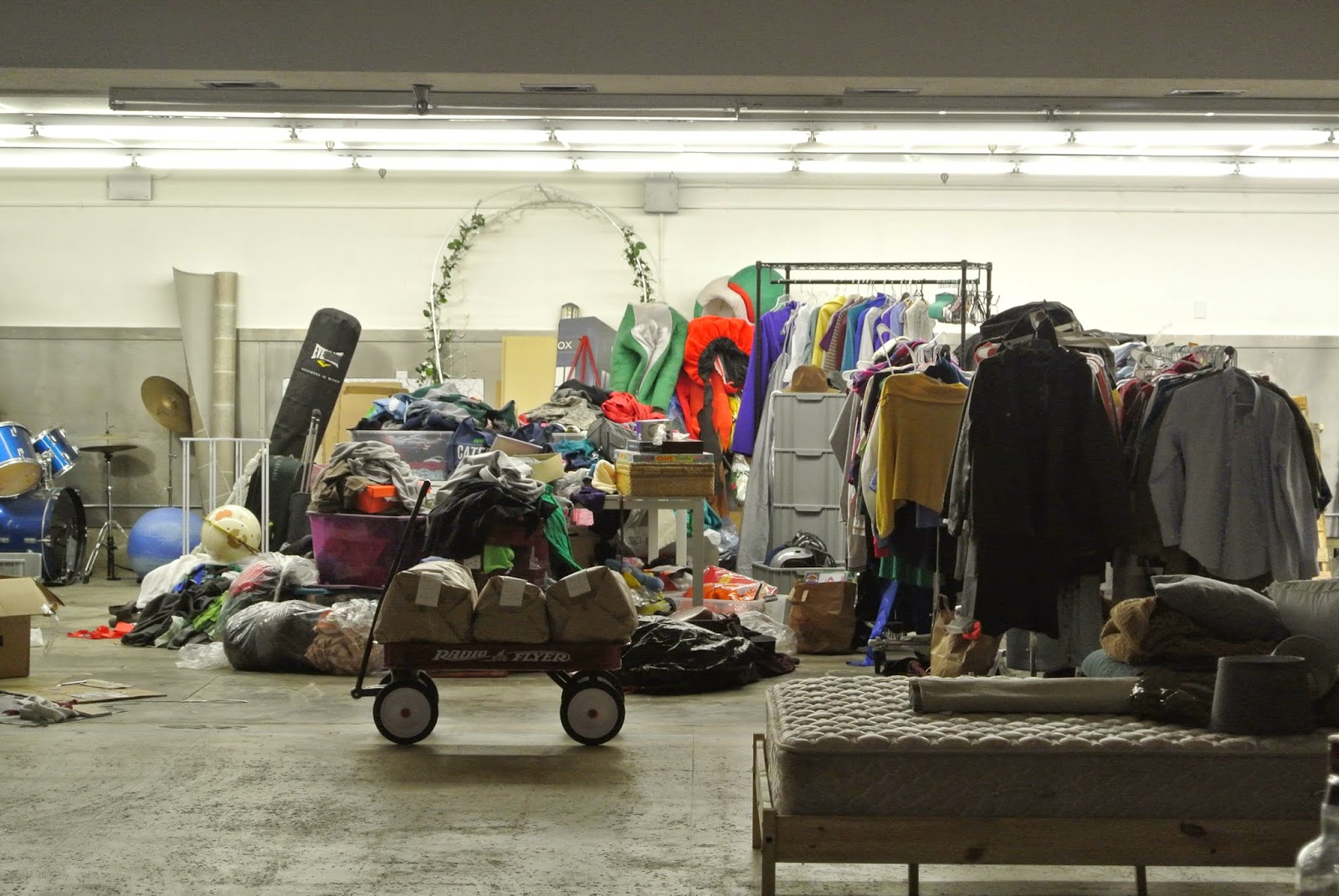 Visiting an office is fun, but after a while, of course, you just don't want to be in the way. So I was happy, as I had planned to make a visit to LACMA, the Los Angeles County Museum of Art. The building takes up space on a campus that's just as sprawling as The Metropolitan Museum of Art in New York, if not more so. The museum was built in 1965, so much of the architecture reflects that sort of space-age 1960s vibe. While the exterior and its sculptures were in themselves rewarding enough to make the whole museum trip worth it,they also have a rad modern art collection and when I was there there was an entire exhibition dedicated to German Expressionism in film. I was happy to get my art nerd on and take a ton of photos.

I should note that to and from the museum, I took my very first Lyft rides. Lyft allows qualified people to sign up to drive their cars around L.A. (there's Lyft here in New York, too, of course) as if they were cabs. They're very safe, and if you're lucky like me, your Lyft drivers will be very attractive, kind, sweet men who chitchat with you about L.A. on your rides to and from the museum. Lyft also gives you $20 free when you sign up (it amounts to about $5 off each trip you take until you use it up) and it's way less expensive then a cab. In New York it's a bit trickier because the pricing can be about the same if you don't get any money off or get any free rides. But I highly recommend it in L.A., especially since public transportation and walking are not really a thing there. 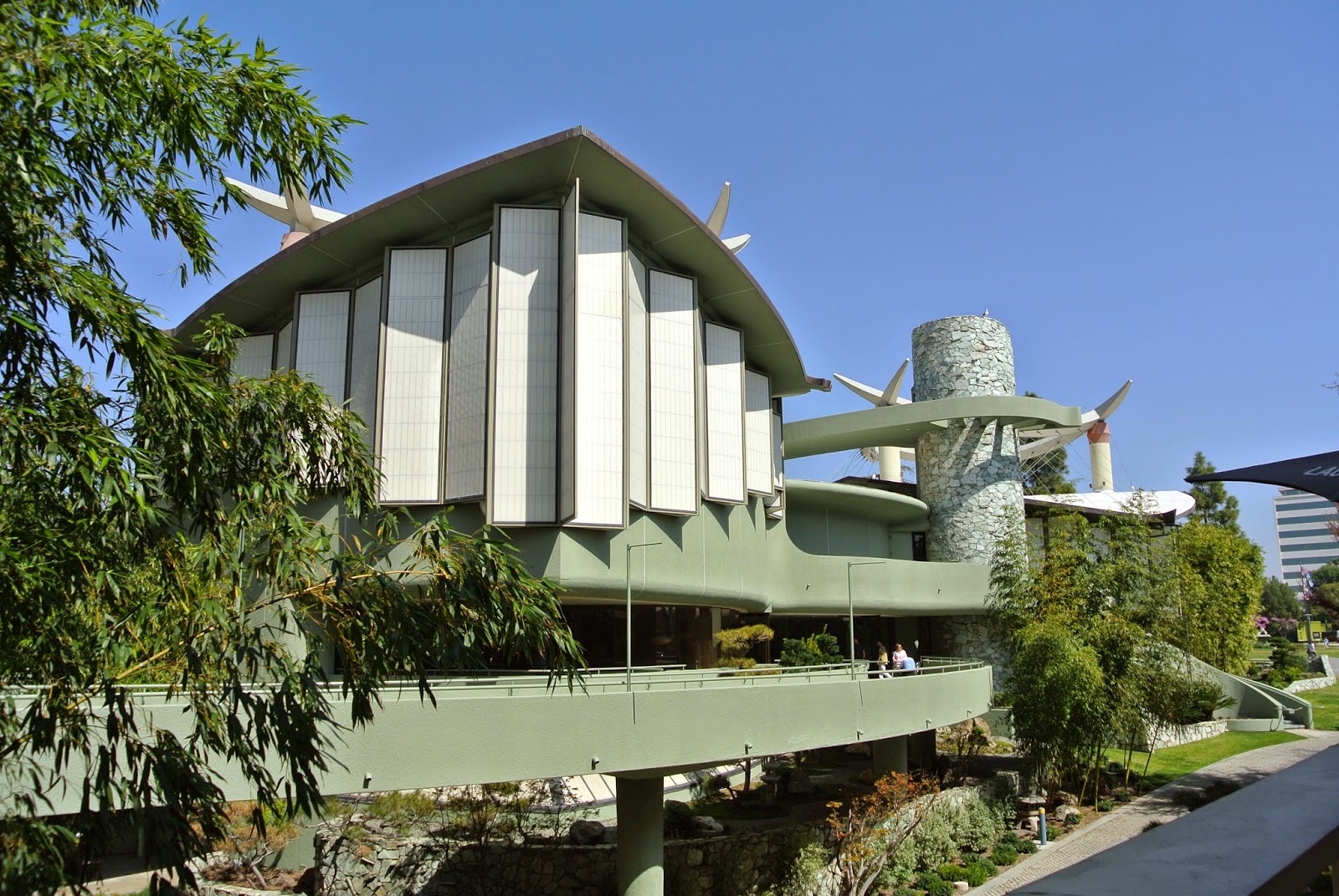 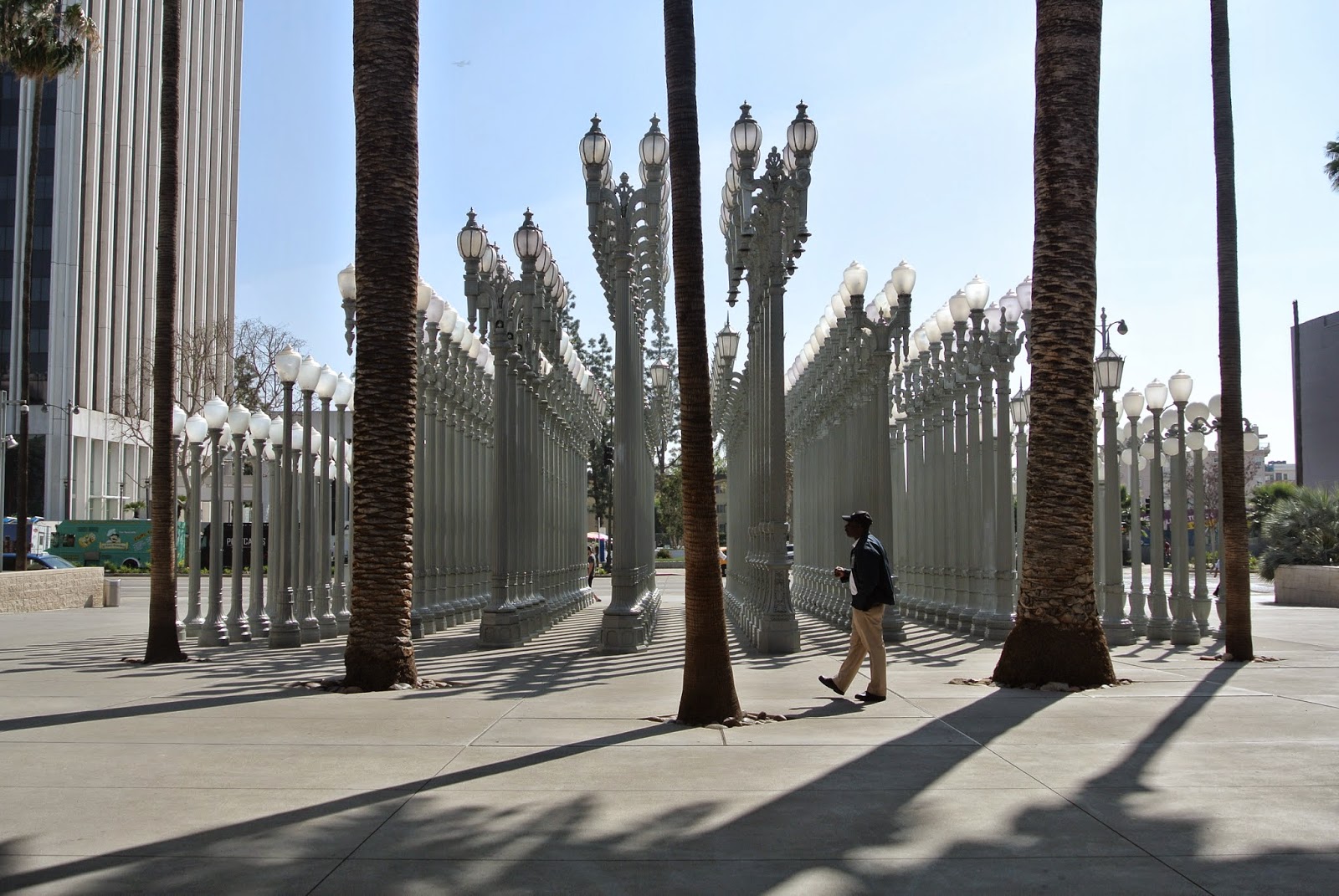 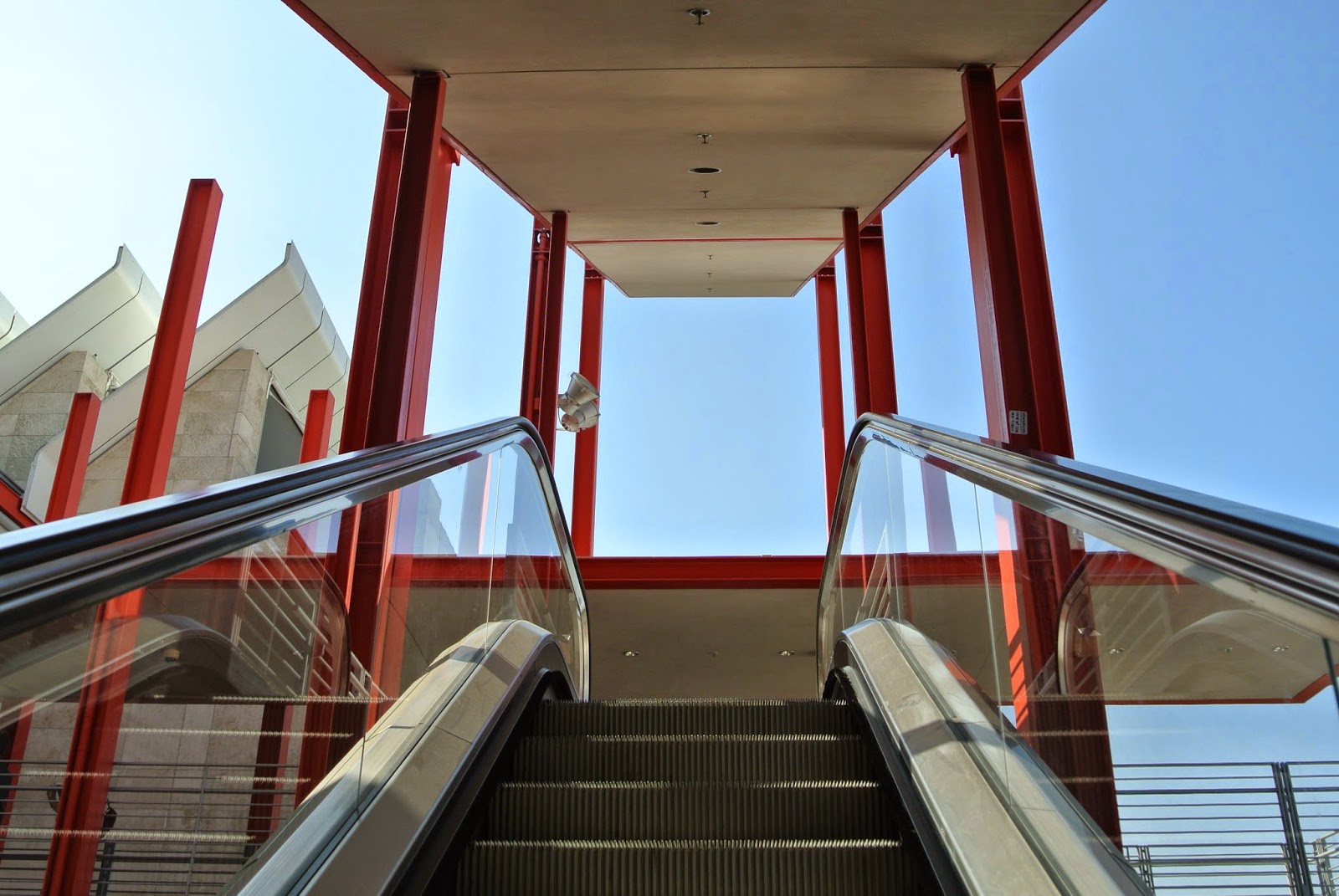 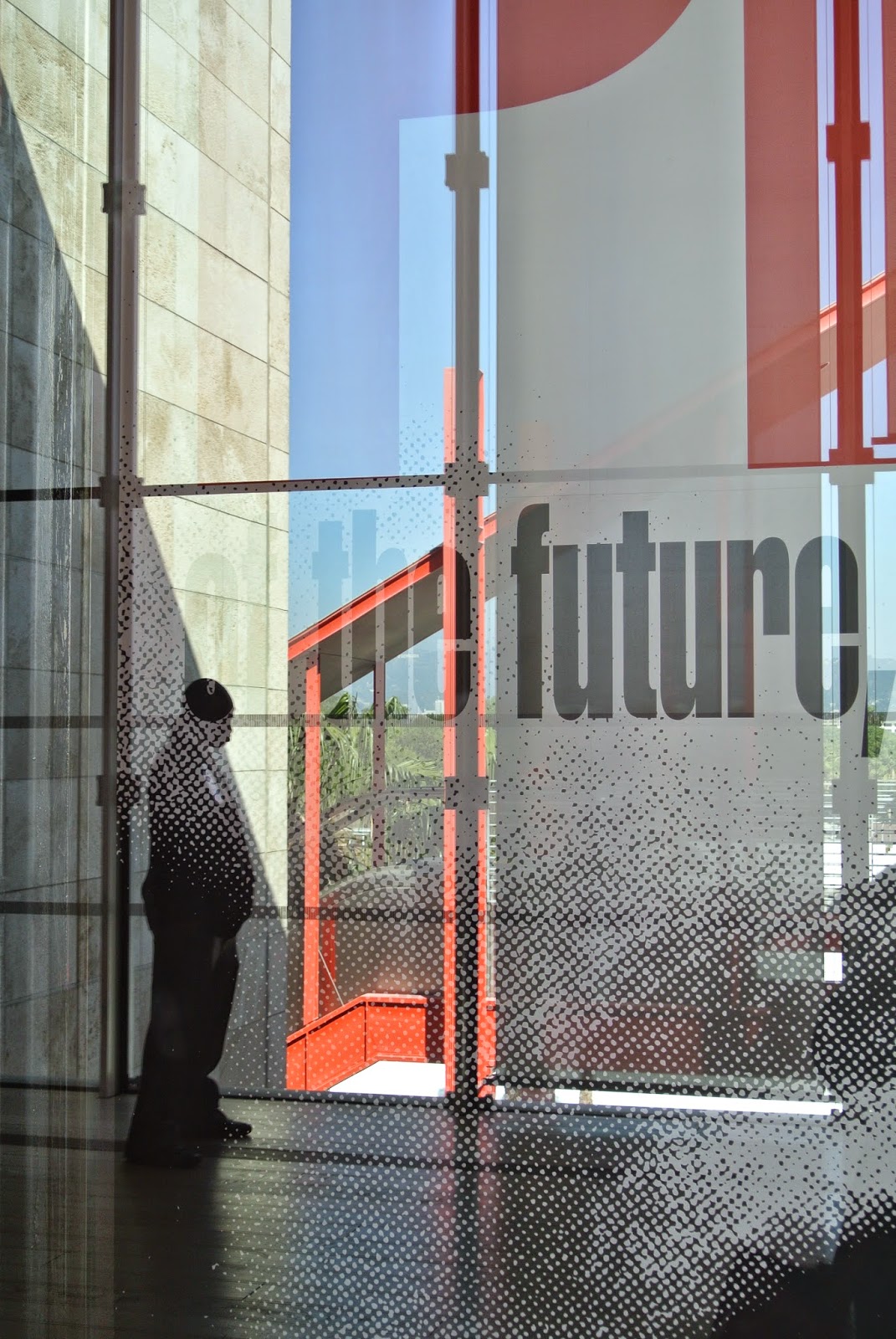 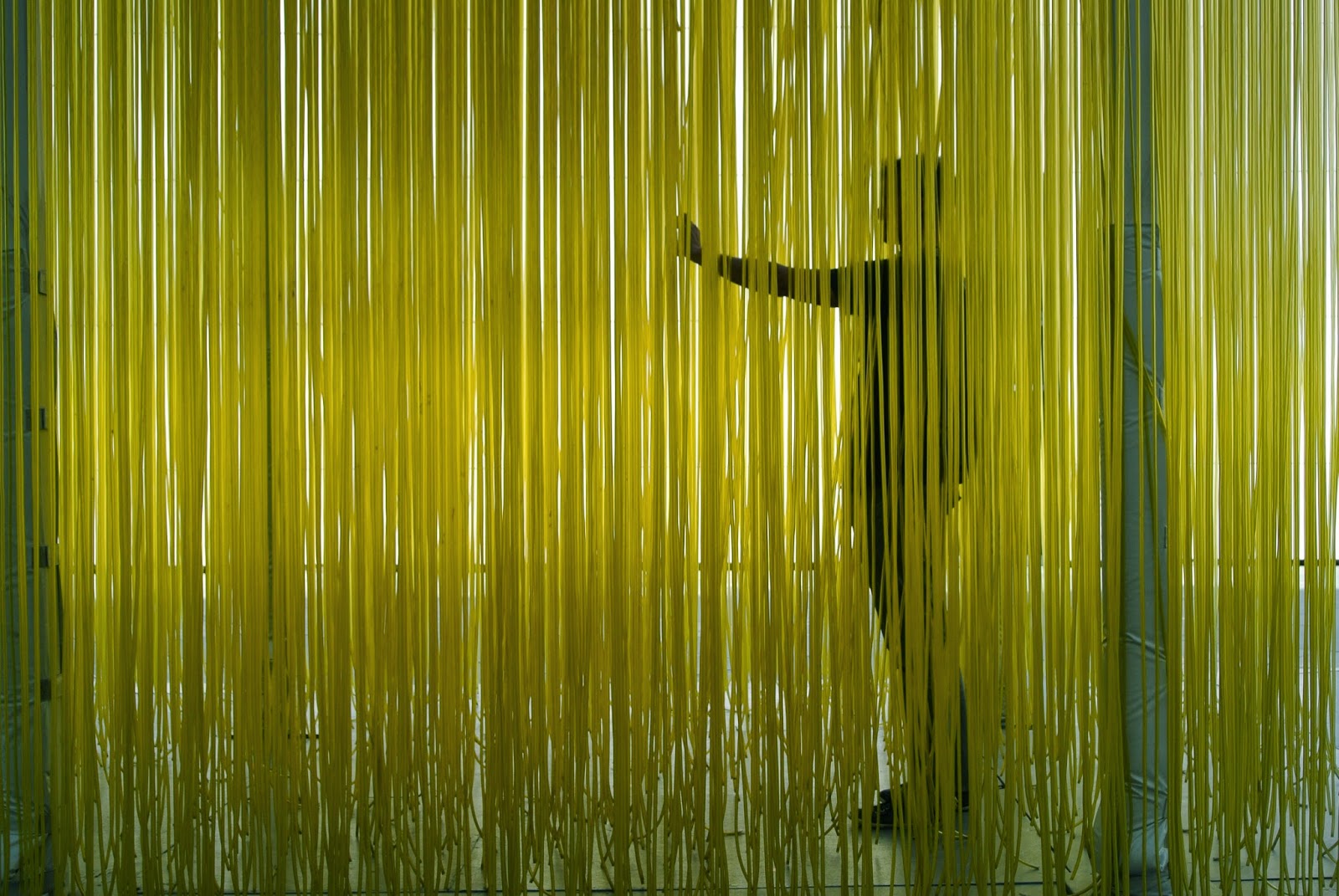 My biggest goal in coming to L.A. was really to spend time with GD. I knew I didn't have too much time there, so I wasn't going to explode if I didn't really get to explore the city, especially since I had been there before and I didn't have a car to get around. But luckily, I got to spend time with some other amazing, rad people like the very awesome SV (check out her film, Fort Tilden, which will soon be in theatres all over the country!) at Sage in Echo Park for rad vegan food and perhaps the most extensive vegan menu I've ever seen. 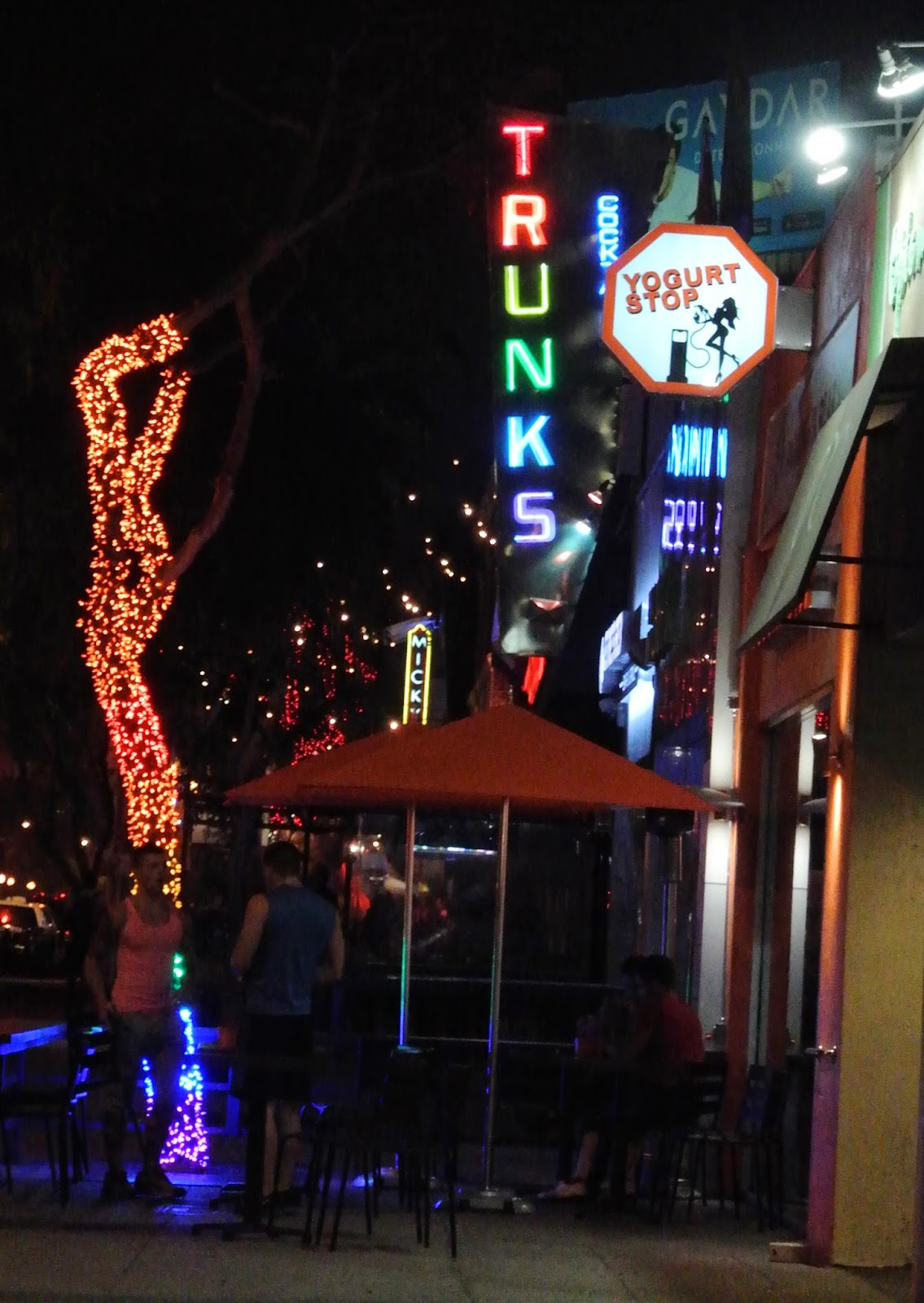 I also got to see the newly implemented Los Angeleno SB and his friends for wine at a very informative (if you tell them what flavors you like, they'll bring you several bottles and do a taste before you make your selection!) and cute wine bar in West Hollywood called V Wine Room. Actually the building itself looks like a 1930s Hollywood cottage, so I was instantly smitten. Our waiter threw all kinds of adorable sass and shade when hearing I came from New York, which I found amusing! Actually, in L.A., and not at all in San Francisco, I found New York getting flack left and right. But to me, New York's still the greatest city in the world so they're welcome to do as they please :) Post V, we went on to laugh loudly and smoke cigarettes and drink drinks that were way stronger than I thought they would be (seriously, if you ever need a really strong gin & tonic head to Trunks in West Hollywood!)

I was happy to see the sun the next day on a trip to Santa Monica Beach with CD. It was a bit cloudy, but I was honestly so psyched to be on the beach I didn't care. I knew once I went back to New York (which, when I left, I narrowly missed a snowstorm) it would be months before I would see sand again, so I was happy to take whatever I could get. We received a visit from MK, too, who was in Los Angeles doing some shows for a few weeks. He was squinty so I gave him my sunglasses to wear. 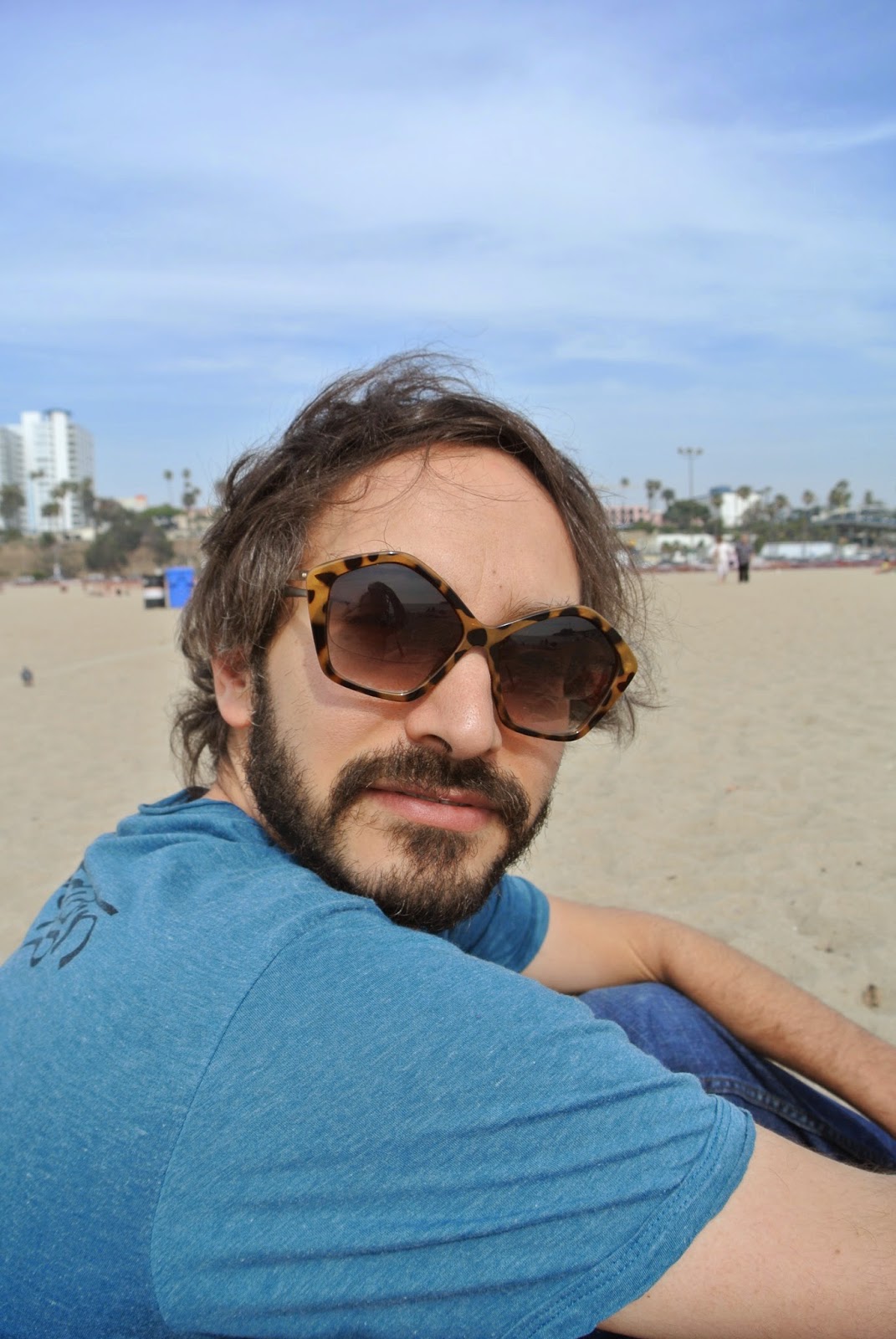 I'm grateful for everyone who took the time to hang out with me, drive me places, and take care of me while I was in L.A and San Francisco. Especially since I was mostly there during the week, when everyone has less free time. Even so, I felt I was really able to see the city through the eyes of the people who live there, which is always the goal. It may be a long time until my next big vacation, but the experiences from this time around will last me awhile, to say the least.

When I came back to New York, I shot the new Rockettes show at Radio City Music Hall. Arriving there, I was bundled up in a leather jacket, a knit hat, and cowboy boots. I probably should have been wearing gloves, but I wasn't, as usual. It was a far cry from the 90-degree Los Angeles weather I had been in not too long before. But I saw this show, I saw the Rockettes dancing in all of their sparkly, leggy glory; I saw an animatronic Statue of Liberty; I saw dance reenactments of all of New York's sports teams; I saw clips from a ton of movies made in the city. It was cheesy and glittery and obviously meant for a certain kind of audience. But what I loved most was how much it made me love New York over again--maybe not the New York they shared, which was a very touristy one, but the New York I created for myself. There are sometimes when I wonder if I just came here too quickly, if I didn't spend enough time checking out other cities to live in, if I could live a better or a different life somewhere else. But the show finished and I left Radio City and I walked down 50th Street, past Rockefeller Center, past St. Patrick's Cathedral, past Saks Fifth Avenue, past the Waldorf-Astoria. I stared up at the skyscrapers, I felt the chill in the air stinging my nose, and I thought to myself, this. This is where I belong.

California is lovely to visit, and thank you so much to GD and AS for hosting me. But it's no New York ;)

Posted by miss-manhattan at 10:37 AM No comments: