The first time I was at the Quad Cinema was also my last. I love a good independent, arthouse -style movie theatre--I grew up enamored of the Gateway in Fort Lauderdale, its '50s style marquee still in use after decades, the films that ran through there that you wouldn't be able to find anywhere else alongside an occasional run of Rocky Horror.

My first time arthouse cinema in New York was the Quad. Based on my previous experiences at the Gateway, I was excited to go to another small theatre I imagined would be like it in New York, where the arthouse cinemas like Film Forum and the Angelika were (and still are) the stuff of legend. They were places where you know you can always find something good, be it a classic or an independent film or a new foreign film or an old foreign film or a documentary, or what have you.

But my experience was not exactly what I had thought it would be. I was there to write what ended up being not exactly a student film, but very much the film of a young person just out of college who had not yet, shall we say, found their way as a director. The theatre was fairly empty save for the maybe 8-10 people seeing this one movie. Ragged, dirty purple carpets dotted with red and yellow polka dots led from the entryway on W. 13th Street to the bored, pimply teenager working the concession stand at the back of the cinema. Fluorescent lights cast a strange, greenish/gray glow over the space. It was so...depressing. Even so, I thought I might come back one day--you never know what films might come in, and it may be a place worth going again. But whenever I looked up film listings, there wasn't anything that stood out to me there. I didn't go back for something like six years.

Until last night, that is.

In time for its 44th year of business, the Quad Cinemas got a total makeover. And not like Tai in Clueless makeover, where she was cute before but now she's stylish...this was like a facial reconstruction surgery, where there was something broken that needed to be fixed so a person could survive. There had been articles popping up about the new Quad, yes, but I didn't read any of them. What caught my eye, actually, was that they were doing a film series on a director I hadn't heard of, Italian filmmaker Lina Wertmüller. Suddenly, after years of having no reason to go to the Quad, I finally had one, where I'd be able to see her films over the course of two weeks if I really wanted to. Her film Seven Beauties, aka Pasqualino Settebellezze, would be showing on Friday. I asked if AR wanted to go with me and, always down for a new experience especially one involving film, he did.

We walked up to the cinema and I hardly recognized it. Now outside there was a sleek, metal and light sign bearing the letters QUAD in a slim, squarish font. We walked in through pristine glass doors to find a foyer of walls of red lacquer adorned with lighted movie posters, then a ticket counter of the same red lacquer where we walked up and bought our tickets. The entire transaction I was 'oooh' ing and 'aaah' ing, staring at the vintage movie posters like Breakfast at Tiffany's and The Fortune Cookie, but written in Italian, hung on a gray wall over plush leather seats, barely able to concentrate on paying for my ticket. The carpet was a clean black pattern, the lights were a bright, warm tone, the concession stand was now on the side of the theatre in the same red lacquer, and where it used to be there was a wall of square televisions all projecting images from films that would be shown in the space in the coming months. The place was swarming with people.

I kept looking around, agape, saying "Oh, look!" and "Look what they have!" Square tote bags and square mugs bearing the theatre's name. "Quaffee" for sale at the concession booth, alongside ice cream from the beloved Ample Hills Creamery in Brooklyn. An adjoining bar where you can go after the movies to, as the cinema says, "meet fellow cinephiles and argue about great cinema over a glass of great wine or beer."

It was like a totally new experience, a totally new theatre that was worthy of the films it would be showing--which, incidentally, I found out about by picking up its elegant yet modern brochure, also in a square, detailing all of their programming for the next month or so. The films of Lina Wertmüller and a new Maurizio Cattelan documentary, alongside other classics like The General, The Day of the Jackal, Quadrophenia, and an ongoing series where they'll have notable New Yorkers introducing classic art films they've never seen. For example, tonight Greta Gerwig is introducing David Lynch's Blue Velvet, and on Sunday night gallerist Jeffrey Deitch will screen Ziggy Stardust and The Spiders From Mars. In May there will be a program of Goldie Hawn movies, a retrospective of films by director Larry Cohen, and more.

I found out that tonight was actually the grand reopening of the theatre. It explained all the people, but I also hoped it would stay that way for the future. According to The New York Times, the theatre was purchased in 2014 by film distributor Charles Cohen, who felt there were too few art cinemas in the city, interestingly enough. He also perhaps wanted a place where he could ensure his own films--which include many foreign and older, restored films- would be screened. In its previous incarnation, it was a space where newer filmmakers (perhaps like the one whose film I was first there to see) could rent a theatre to screen their work. Less a curated art house than a pay-to-play gallery of sorts.

The Quad was actually the first multiplex in New York, and Cohen "wanted to return the space to its former glory," hiring not just a team for the renovation, but for the programming. On the staff at the Quad are now people who were once in charge of choosing films to show at the IFC Center and the Film Society of Lincoln Center. To celebrate the theatre in its new look and its 44th, almost 45th, year many films with "quad" or "four" in the title will be screened in the coming weeks (see the aforementioned Quadrophenia as well as The Four Feathers, Rocky IV, and Four Weddings and a Funeral, among others).

The film we were there to see began seating 10 minutes before it began, and we got in line for what ended up being "Theatre U"--each theatre now had a letter of QUAD as its title--I dug how the branding was clever yet ever present--and went up a short stairway where the same sleek, square letters of the theatre beamed back at us. We took our seats in a room painted red, in cushy chairs (apparently from Norway) that leaned back if you wanted them to. I have since learned that the number of chairs in the four theatres have actually been decreased--as opposed to the typical moneymaking tactic of increasing the number of seats and jamming them close together so more people can fit--from a total of 570 to 430 so patrons can be more comfortable and have better sight lines and actually enjoy seeing the films they've come there to watch.

We sit down and the seats are as comfortable as they look. Director Amy Heckerling (of Clueless and Fast Times at Ridgemont High fame) introduces the film and speaks shortly about Lina Wertmüller. I'm shocked I don't know more about this woman, the first woman director ever nominated for an Academy Award (whatever those awards mean these days, anyway) who is known for her signature white-frame glasses, but I also learn that I can find out more about her in a documentary that will be showing soon at the Quad. How about that. I will be back this time after all.
Posted by miss-manhattan at 1:11 PM No comments:

Before I even photograph Sean McMillan, an SEO expert and DJ who I have had the pleasure of calling my friend for about 10 years, we sit at his kitchen table debating the existence of sneaker culture (he thinks there’s not one). There’s a box of sneakers in his living room which he’s looking to sell on eBay. There can’t be a culture in the sociological sense of the word simply based around buying stuff, he says. That’s just capitalism.

Sean is a wise, patient intellectual with a mind for business. He produced an XXL Banger and deejayed all the time while still in college. He also became a Reebok Brand Ambassador, the owner of his own DJ empire (where he performed with the likes of Wiz Khalifa, Wale, Mac Miller and DJ Jazzy Jeff), and a Product Line Manager at And1, where he designed several pairs of sneakers that were sold across the country. Preferring to go into business for himself, he then built a business as an SEO specialist, though he is also now a resident at digital marketing agency VaynerMedia working with entrepreneur Gary Vaynerchuk. And deejaying on the side. He's a powerful, entrepreneurial force of nature.

Tonight, Sean is spinning (as Sean Mc) at The Corners in Brooklyn. First, though, we grab a bite to eat. Sean selects Ma-N-Pop, a southern restaurant not too far from his home. We choose baked chicken with greens and mac ’n cheese (he) and turkey wings with corn and green beans (me) and get the deliciously buttery-smelling treats to go. There’s been a request tonight for some Soca music and Sean has to do some research about the genre so he can incorporate it into his set—he’s known for his love of 2000s B-sides, but plays all sorts of music.

“Did you know ‘Who Let The Dogs Out?’ is a Soca song?” he says to me of the viral, summer of 2000 Baha Men anthem after a few minutes of research. “I’m definitely not playing that tonight, though,” he laughs.

Later, Sean does a costume change then packs up his turntable and mixer into their chrome and black cases. A car picks us up and takes us to the venue, where Sean begins setting up his equipment. His turntable syncs to the music on his computer so he doesn’t have to carry around heaps of records like back in the day but can still scratch and mix them as if he did. He puts his headphones on—earbuds as opposed to the typical massive DJ headset “because I’m a contrarian,” he says—and soon music flows out of the speakers. Future and Santigold and Bruno Mars one right after the other, Sean’s fingers moving in a dance-like succession, twisting vinyl and pulling levers and pressing buttons to blend others’ music into a symphony of his own. People pulse in their seats, tapping fingers, bouncing shoulders. “It’s good to be erratic at the beginning,” Sean says, smiling. “That way nobody can pigeonhole you.” 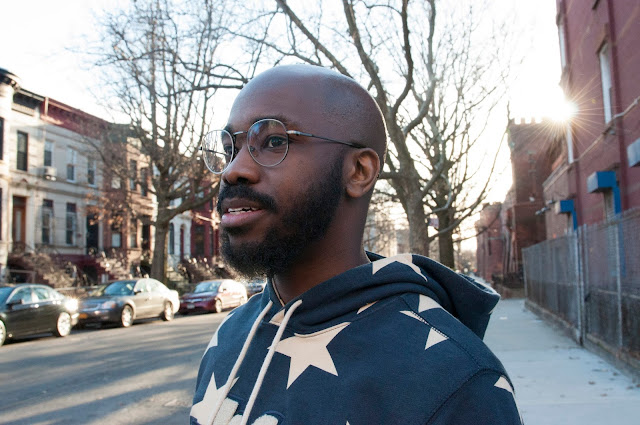 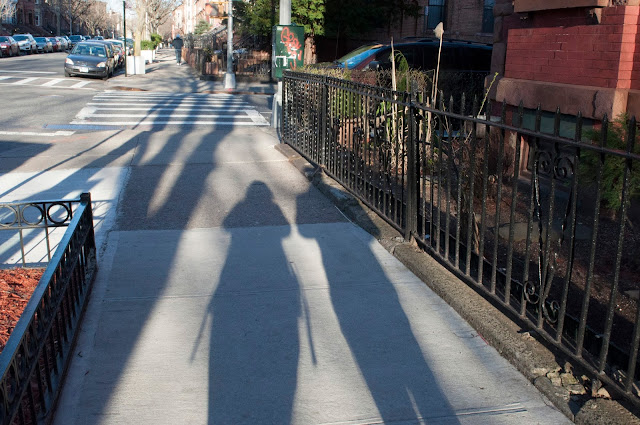 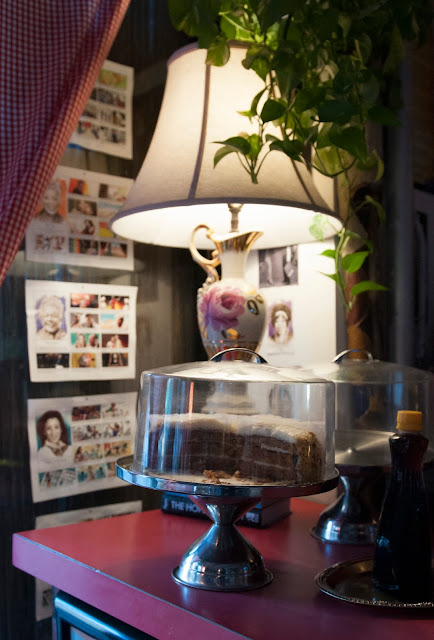 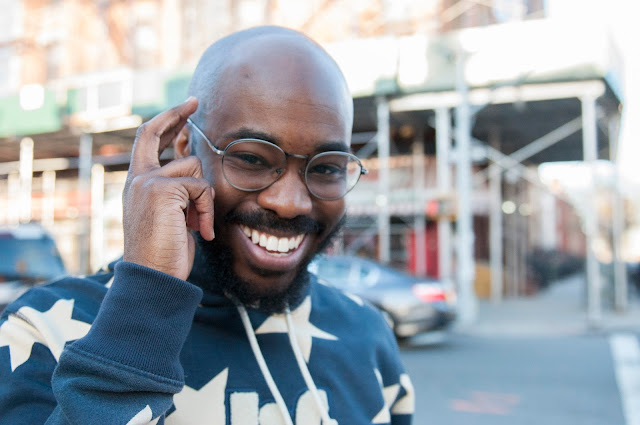 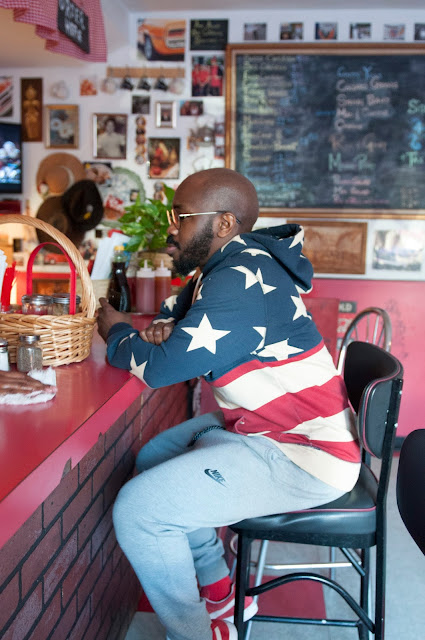 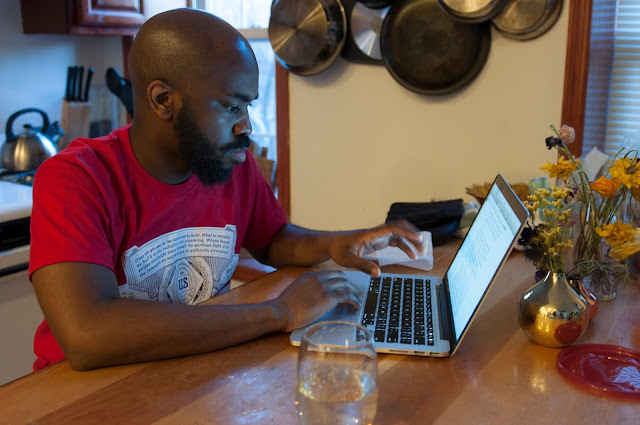 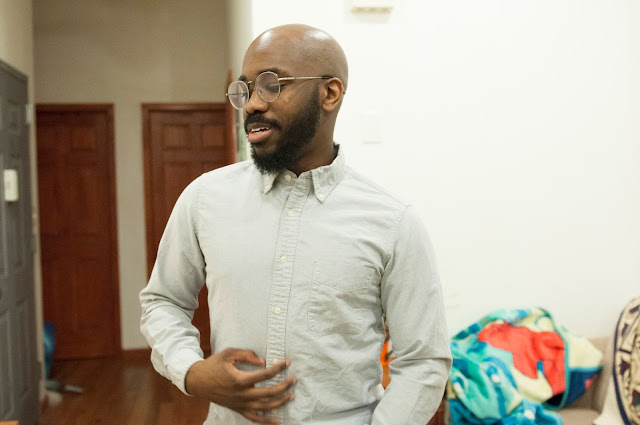 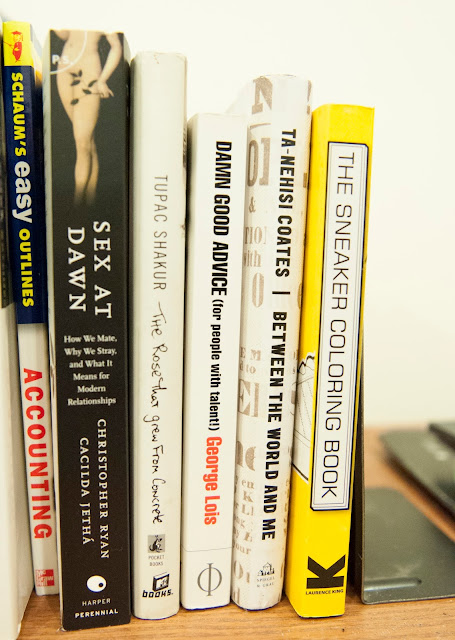 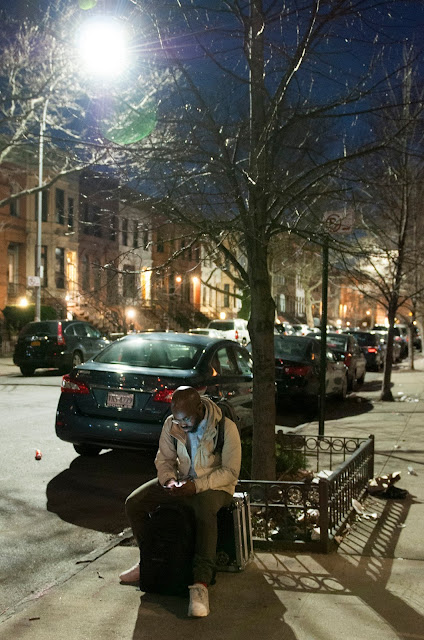 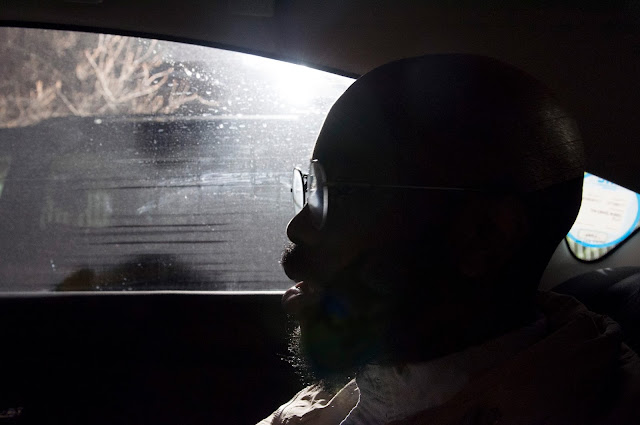 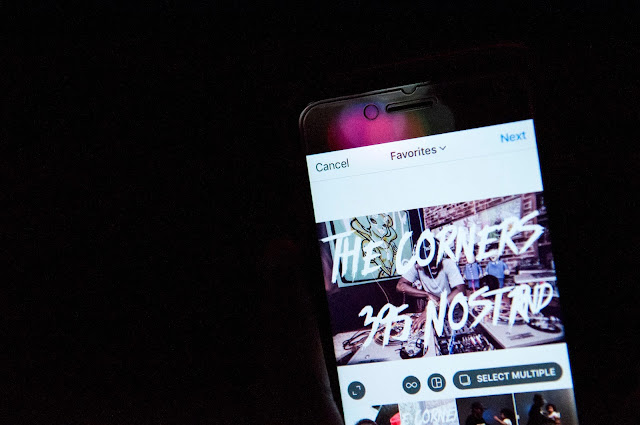 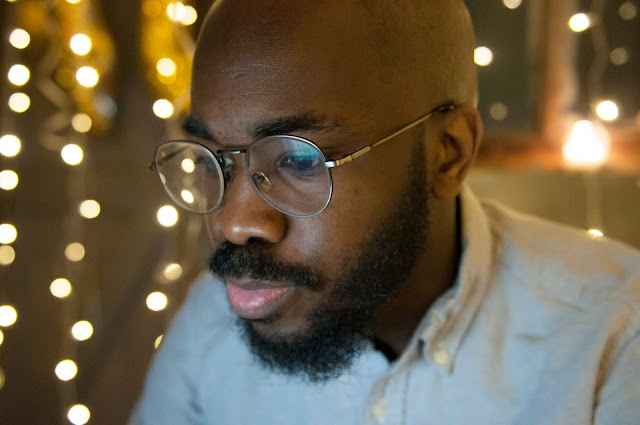 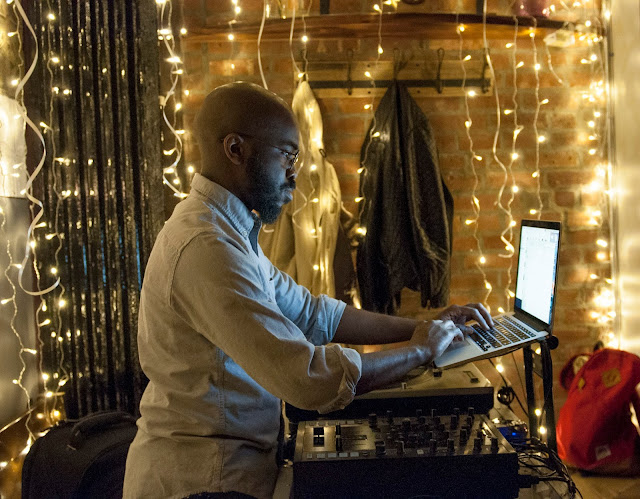 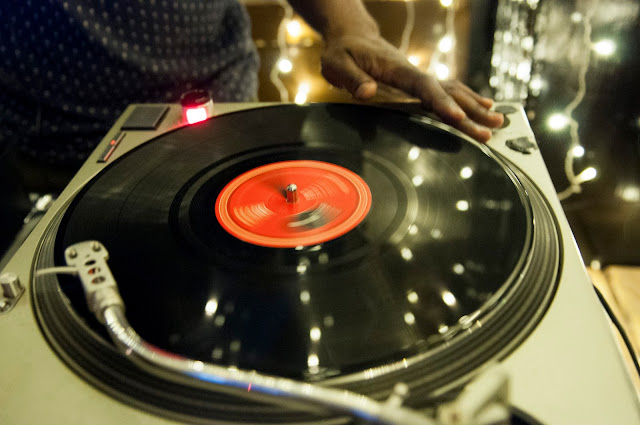 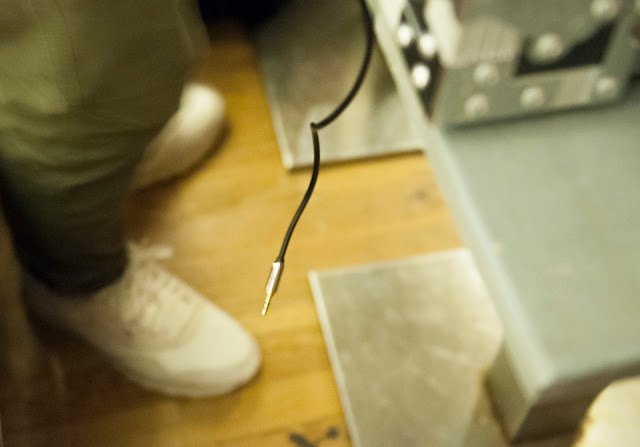 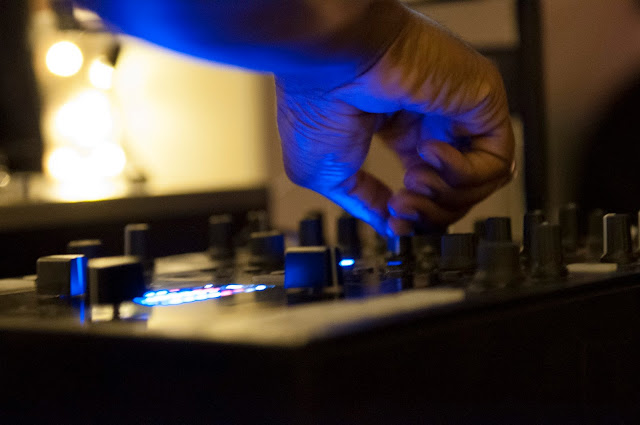 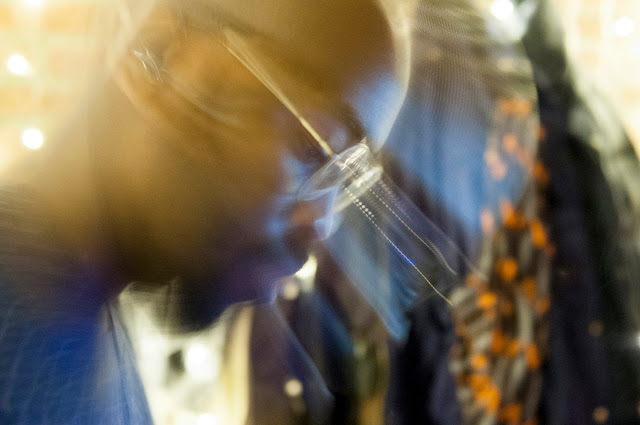 Posted by miss-manhattan at 12:00 PM No comments: