If You Need Me, I'll Be on the Roof

As happens when doing laundry in an apartment building, you meet some of your neighbors. This past weekend, I met Casey, who told me a story about how he and his wife recently held a party on our roof deck. I stopped him.
“I’m sorry, our what?”
“Our roof deck. You know, you just take the stairs up from the sixth floor. You didn’t know we had one?”
No, I did not. And after living in this apartment a year, it was about damn time I did! Yesterday was my first chance to visit. A white picket fence surrounds the deck, as does a sign marking the deck’s hours (only until midnight, apparently) like a pool, and as if someone might perhaps fall in and drown if sitting up there after the witching hour. Crossing onto the brown wooden deck lifted a few inches off the actual roof floor, I sat on one of the many generously provided deck chairs and faced the sun moving toward the western sky.
I sat for an hour or so in the five o’clock sun, tiny beads of sweat beginning to dot my face, but I didn’t care. How had I gone a year without coming up here? A couple of those months would have been insanely snowbound, but still. All of those fine fall and spring (or whatever we had resembling those seasons) days could have been spent atop my roof with a jagged skyline of buildings just sweetly caressing the sky, leaving a larger patch of blue than I had seen outside of a park in a long time. I resolved to repair this rift in my roof experience and ventured up there again this evening. 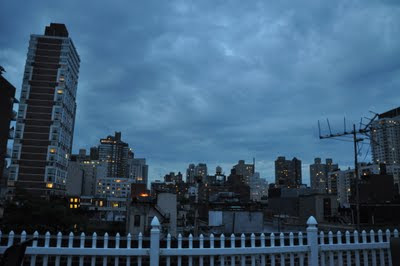 Walking home from an event around 8:15pm, the sky was not yet dark. It was one of those balmy, early summer evenings where the weather says, ‘Hey, sorry about all that heat a couple days ago,’ by sweeping a cool, light breeze down each street that rustles leaves and ever so slightly rushes through your hair. People sit outside on their stoops because they can, watching the light fall further and further away. 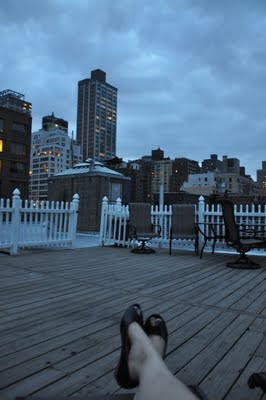 I made it home before it was dark, thankfully, and rushed up to my roof as I had the day before. I sat, and listened to nothing, save for the occasional car horn or whoosh of traffic. Growing up in South Florida, it was nothing I wasn’t used to—in fact, if a place is too quiet it creeps me out. After a while, I realized how loud my own thoughts were, so loud in fact that I had forgotten mostly silence danced around me. I wonder if this is a step on the path to becoming a New Yorker—where you’re able to ignore and forget the noise and somehow get lost. Everything else is background, and only what’s in the present matters.
I sat up there and I looked at the buildings, lights slowly popping on in apartments as time ticked past, as if surveying my kingdom. Soft grey clouds made their way across the sky as that same cool breeze drifted past. Staring up into the skyline, I knew. This, I thought, this is what I signed up for. I had never thought New York could belong to anyone; it was too wild a spirit to ever be tied down to one person. In that moment, though, I felt more than I ever had that New York could belong to a person, and that it belonged to me. I felt invigorated and alive, that I could call something so energetic and passionate and electric my own. But I also knew the moment would be fleeting—soon New York and I would be back to our old relationship, I the lovelorn teenager and New York the uncatchable catch. I also knew that every New Yorker must have had this experience at least once. The power of that moment keeps them around, coming back for more. We know that we can never fully own the city, but for a few moments once, we did. And that was enough to bind us here forever. 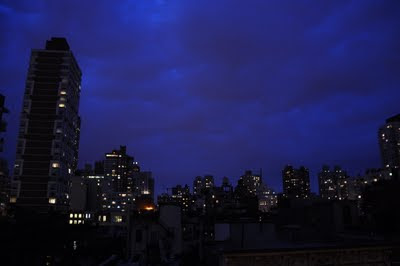