Sitting in a park all warm and snuggly was not something I expected to do in the middle of a New York winter. Post-snowfall, the city is slushy, cold and grey on the street and the days of happy sunlight are a gift. It’s true—winter can be tough. So how nice would it be to have some trees, some warmth, some light to make it all better? 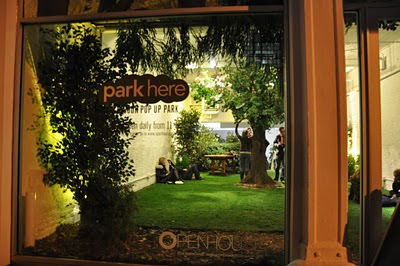 I imagine that’s what the people of the Openhouse Gallery in NoLIta were thinking. In other months, the Openhouse Gallery is normally an event venue, a gallery space, a pop-up retail space (where a store “pops-up” in a certain place for a temporary amount of time) and more. Because January tends to be a slow month, however, the fine people at Openhouse decided to do something different. They brought in loads of faux greenery from American Foliage, the New York-based company that supplies faux-liage to most of the movies filmed in New York, and decked the space out to make it a free pop-up park, calling it “Park Here.” It’s not as big as Central Park by even a fraction, but at 4500 square feet, it’s still impressive. The green stuff is everywhere, from shiny green AstroTurf on the floor that tickles your hands to plastic-y, papery trees up above, to inflatable rocks to lay upon and forest wallpaper that photographs as realistically as Yellowstone. There are also special seasonal-affective lights whose beams can put you in a better mood. Something just feels better when you take it all in, hearing the sounds of birds chirping while you drop coins in the pond, sitting on a bench perched among fallen leaves, or reading a book under your favorite tree. You know, the things you do in a park. 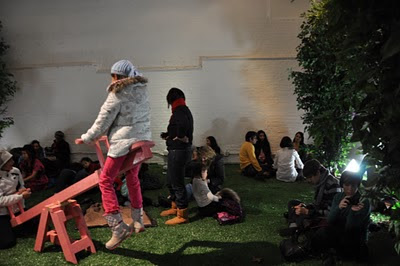 Like a traditional park, the pop-up park is full of activity, too. People of all ages come to chill on the weekends— kids on the big pink seesaw, couples cuddling on the inflatable boulders, young people sitting in circles discussing the meaning of life or at least the latest episode of How I Met Your Mother. Each day of the weekend there’s also a vendor selling treats from restaurants that are usually closed in the winter—Luke’s Lobster, Mexicue, and more. Then, on weekdays, the park opens to a different crowd. Free yoga is offered in the park every weekday from 12pm to 1pm. And on different nights there are private events like wine tastings and picnic and film nights hosted by lifestyle website UrbanDaddy with meals from lovely places like Café Boulud and The Little Owl (you can purchase tickets online). 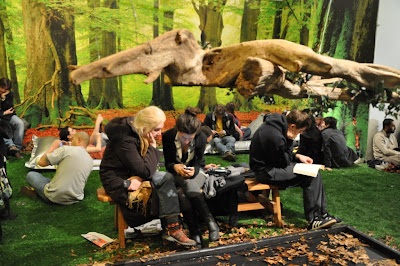 What else is nice about the park, that’s different than the outdoor versions, is that this one really has a sense of community. Usually going to a park involves little effort because there are a bunch of them strategically placed (I’m guessing) all over the city. But here, everyone has made the effort to gather into the space and enjoy it. It’s a novelty, but it also brings people together. I’m sure in traditional parks people don’t sit as close to each other as they do in this one, which is doubtless a result of the enclosure in which the park exists, but I don’t think that matters. New Yorkers are used to being close together anyway, so why not be close among some warmth, some trees, and 50 of your closest friends?
“Park Here” is open until January 30th, so check it out while you can. The Openhouse Gallery is located at 201 Mulberry Street near Spring Street in NoLIta, just waiting for you to come in and park yourself. 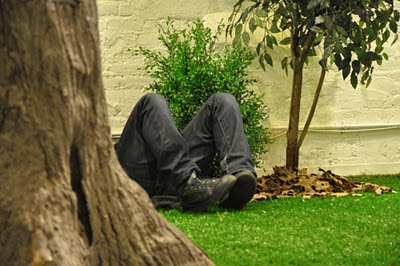 Posted by miss-manhattan at 12:24 AM No comments: