New York is full of surprises. Anywhere, at any time, there is something absurd, inventive, or magical happening. Like on Saturday, April 2, when there was an enormous pillow fight in the middle of Union Square.

This pillow fight was a part of International Pillow Fight Day, organized by the Urban Playground Movement, a collective dedicated to making unique happenings in public spaces a larger part of popular culture and "replacing passive, non-social consumption experiences like watching television, and consciously celebrating public spaces in our cities as our 'urban living rooms.'" Basically, get up off your butts and interact with other human beings, world. This particular pillow fight was organized by Newmindspace, the brain child of Toronto-based artists Lori Kufner and Kevin Bracken, known for putting on large-scale, free public events such as this one. The New York Pillow Fight is one of their largest events, in three hours drawing as many as 5,000 people.

People began lining up around barricades in Union Square more than an hour before the event, congregating with their pillows (no feathers allowed, though a few did slip by), warpaint, and even battle costumes (one kid dressed as William Wallace in Braveheart). It was all a friendly, silly atmosphere of that happy, crazy energy adults normally use to do things like play kickball, channeled into pillow fighting absurdity. People of all ages counted down the ten seconds before 3 o'clock, then went insane on each other, smiling and smacking with delight. It's rough stuff, though--after 15 minutes, we had taken quite a fluffy beating.

When ALiCo told me about the event, I was instantly on board, if for the potential photographs alone. I was not disappointed. Take a look for some of my favorite scenes from the fight. 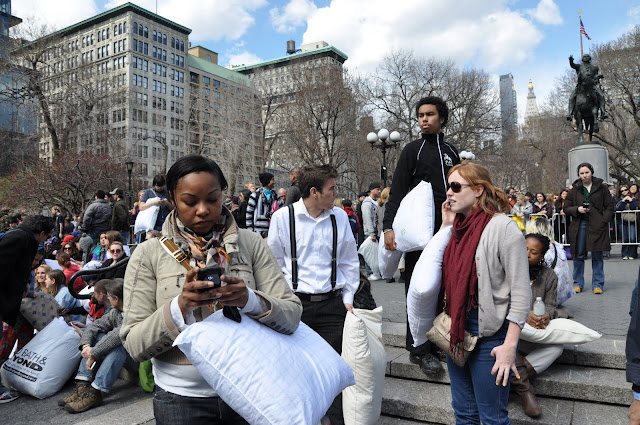 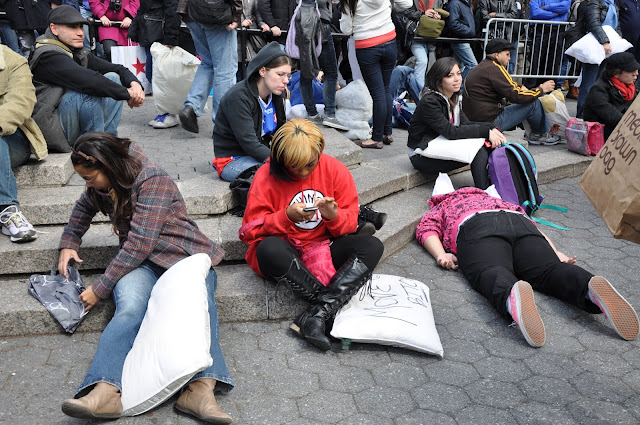 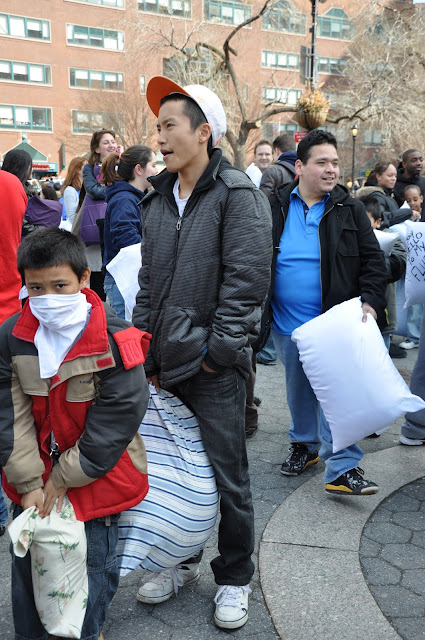 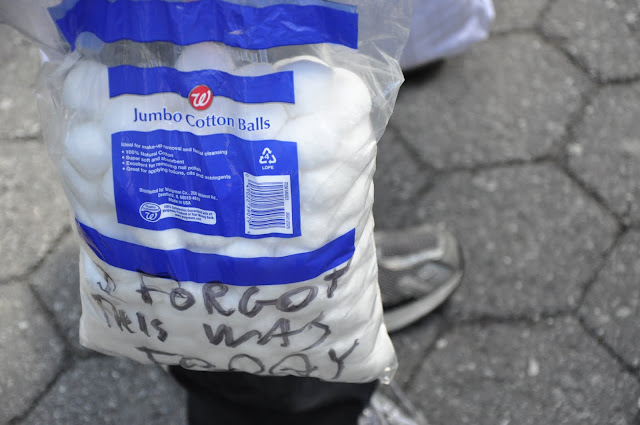 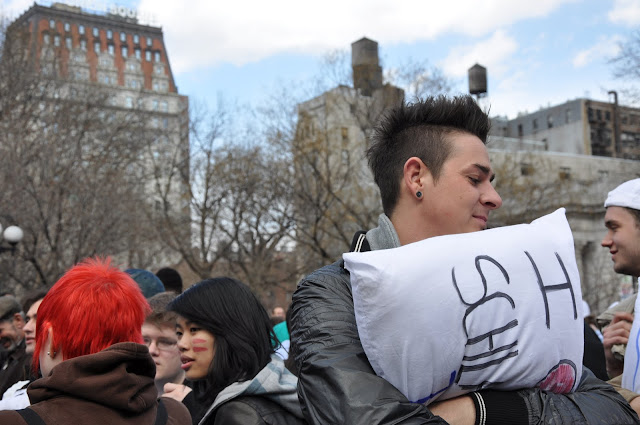 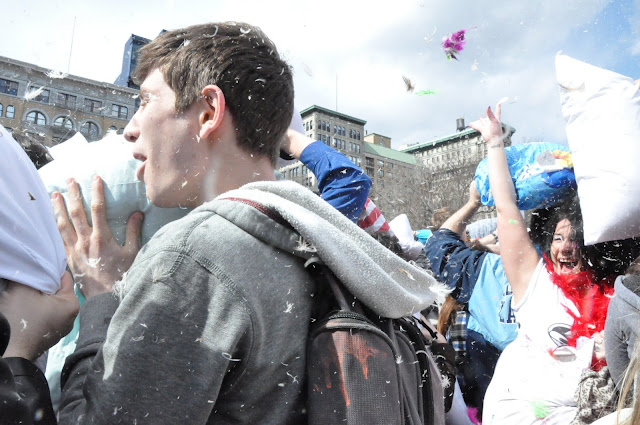 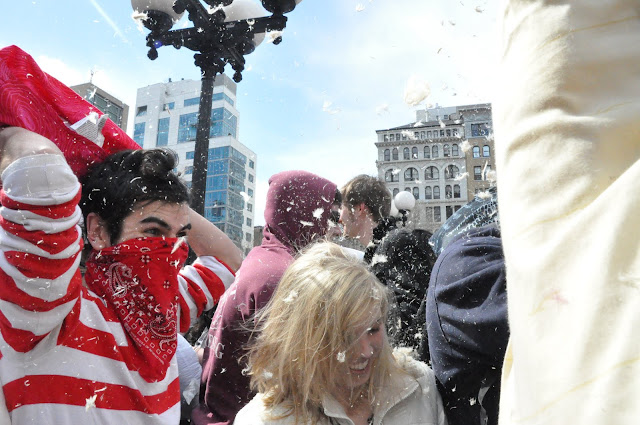 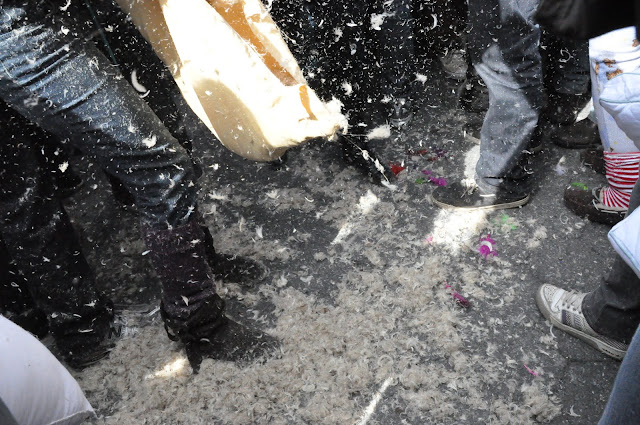 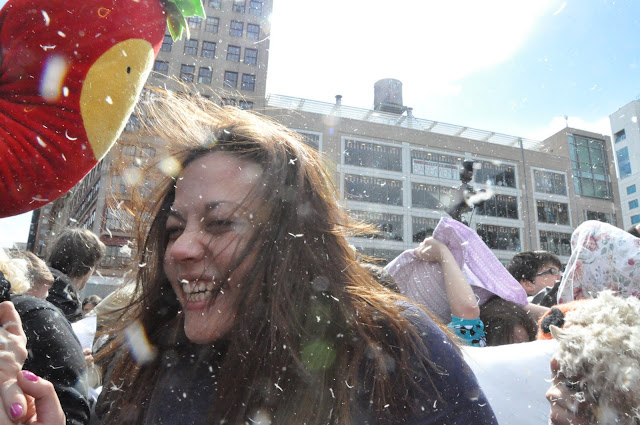 Rich, chaotic swirls of notes pulsate in a darkened room. I am blissfully lost, spinning and twirling with a happiness usually reserved for drunken strolls downtown at two or three in the morning, but tonight the music is my only intoxicant. Until now I had forgotten how the blue hum of a clarinet ties my heart in beautifully mournful knots, how the upright bass moves my blood, how a trumpet tickles my feet into motion. It was like I had fallen into some fantastic combination of The Thin Man movies (made in the 1930s, when people went to clubs only to dance and listen to jazz jazz jazz) and Woody Allen’s Manhattan (that opening sequence where he uses George Gershwin’s “Rhapsody in Blue” to begin the story of his love for New York City), condensed into a little dive bar called Mona’s on Avenue B near 14th Street.
Neon Brooklyn Brewery and Miller Lite signs burned in the window. Atop the dark wooden bar sat a series of chalkboards listing beer prices and drink specials. The room’s only light came from the fluorescent bulbs behind the bar, shining the faces of its patrons—a crowd of scruffy older gentlemen with longish, graying hair and mustaches; their ladies with reddish hair and leather vests; young people wearing black or plaid—with a haze of white light.
At the end of the bar sat a group of musicians including a pianist, a bass player, a guitarist, and a clarinetist, among others. They wore suits or dress shirts and ties with porkpie hats, almost anachronistic to their location, a small space between the bar’s two rooms, people squeezing past them to move from one room to the other. Even so, they filled the entire bar with music so luxurious I felt like I could pick the notes out of the air and hold them in my hand. I wanted to steal a few to have a personal soundtrack as I walked around New York, but the notes bounced deliciously around the room, too difficult to catch. The memory would have to do.
There was a woozy but crystalline rendition of “Sweet Lorraine.” An energetic “Honeysuckle Rose,” for which the musicians were joined by three singers, young women in high-waisted skirts and cardigans who looked like American Apparel but sounded like the Andrews Sisters. Each musician made room for one another’s solos, improvised with skill and electricity. The whole room fell silent with appreciation, save for applause at the end of each song. This was not music one ignored or talked over: it demanded respect, and rightly so.
I closed my eyes often to just listen. Since I had been in New York I had not heard proper jazz like this, strange since I always believed it was what the city sounded like. Deafening silence and heartbreaking noise, togetherness and solitude, pain and love, organization and chaos. It is a crystal clear yet incomprehensible twisted beauty that somehow energizes us and makes us beg for more. Jazz is New York.
I thought I heard my pulse in my ears, floating on the sheet music of my own soundwaves, but I was wrong. I was dancing to a heartbeat that so clearly belonged to the city. Merely being in its presence electrified me anew.
This is what I love about New York. Even in times of uncertainty or faithlessness, there is a moment that will completely reinvigorate us and make us realize what “it”—this living here, this hustle and bustle, this ambition, this occasional lack of sanity—is for. It is for late-night walks down 14th Street to dive bars seeping with jazz, for the plucking of that bass and the whine of that trumpet, for hearing the city’s heartbeat in one room, in one night when there is only light and silence and jazz.
Posted by miss-manhattan at 1:42 PM 1 comment: