Top Great Moments I Didn't Write About But Should Have: 2016 Edition

As ever, a list of some of the great moments from the past year that I didn't get a chance to write about as they happened. To compile the list I usually go through all of my social media platforms from the entire year and I pick out the moments, later finding images and doing research (into my own life, which is strange and revelatory each time) about each to make sure they're accurate. The process usually takes longer than a) I think it will and b) than most of my blogs do, but it's the only year-end, or rather year-beginning, list I do so I might as well go big, no? That being said, here they are. Enjoy! 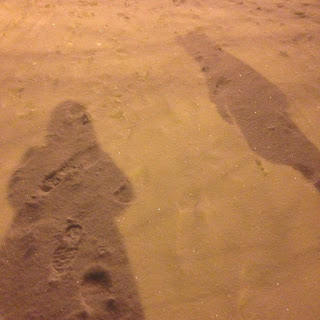 23- In light of the massive blizzard headed to New York, a travel ban was instituted all across the city, from busses to subways to cars to hovercrafts…you name it. But A & T were visiting that weekend and we had all made plans to get together. While my friends across Manhattan weren’t able to make the trek, I pulled on my rubber boots and trudged my way over there. I say trudge more because that’s the motion I was making as I pulled myself through the snow and not because I wasn’t enjoying myself—I was! It was so wild to be able to walk in the middle of a Manhattan street, three feet of snow be damned! Along the way, there were people in the street with toboggans and sleds, children and adults alike frolicking in the snow. I arrived at their apartment with my mascara all over my face because of the snow and wind, but I felt invigorated. We sat and drank wine and ate leftovers, chitchatting until the snow stopped. By that time the snowplows at come through and I was able to walk on asphalt, still in the middle of the street, back home.

31- HanOre and I visited Patricia Field’s, the legendary bastion of downtown outrageousness on the Bowery, before it closed forever in February. The store was a haven for glitter, spandex, rhinestones, sequins, leopard print, faux fur, vinyl, platform shoes, wigs, and the people who wore them best. I had always wanted to shop in the store, but with everything 50% off I could finally swing it. We tried on all manner of spangled concoctions in a teeny tiny dressing room, and I left with a very important purchase (below), which I think is a perfect way to remember the store. 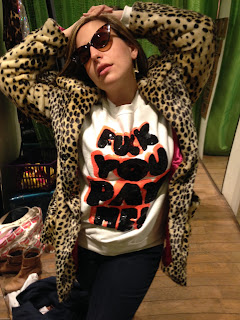 5-I was assigned to photograph the band Low Cut Connie, who I love, for Impose Magazine. It was a late show, starting at 10 or 11pm…or so I thought. The band had two openers, and didn’t even end up going on until 2am. I was, to say the least, not amused. But I did my job, of course, and when the band came on they were absolutely electrifying…even though most of the audience had gone home by that point. They performed full-out, as high-energy as they would have been if the place were packed, and they were intoxicating to watch, banging on pianos and bass and guitars in all of their sassy dive bar rock and roll glory. I left the venue at about 3:30am swimming in happiness, and when I finally fell into my bed around 4am, the happiness had seethed into my joints and bones. THAT is what a concert is supposed to be. 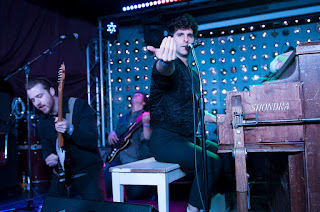 10-I don’t remember how it happened or whose idea it was, but HanOre and I ended up hosting The Great Martini March of 2016 throughout downtown Manhattan with a few girlfriends. Though that is perhaps an understatement. As we wrote in the invitation:

We'll start at Art Bar at 8pm then work our way over to Cafe Cluny, across the street to Corner Bistro, and a few blocks south to Little Branch. By that time, we'll be close to Macdougal Street where we will unhinge our jaws and shove however many Belgian-style frites into them as humanly possible. Or just have a nosh, you know, whatevs.

And we did it. All of it (almost…I think we decided to finish our martini madness at Cafe Cluny where, incidentally, they have a fantastic drink called a Filthy Martini made with garlic vodka and tomato water. What is tomato water, you ask? I HAVE NO IDEA! But it’s very delicious and makes a great drink even better). We finished it up with a visit to the newly-reopened Pommes Frites in the West Village…which, if we’re honest, was the whole reason for the event to begin with.

27- One Saturday, AR and I met up in the far reaches of Red Hook for a day of exploration. We started with lunch of brisket and pulled pork at Hometown Bar-B-Que, a vast space with high ceilings that might normally only be in possible in…well, not New York. We then traveled our way through pretty much the entirety of the neighborhood, snacking on soft, warm cookies at Baked (despite the August heat) then traipsing over to the Valentino Pier for sunshine and water and sitting on rocks, stumbling across gentrification porn—really fabulous, modern, intricately designed homes in former industrial spaces that are making rents go up in the area—as well as the Golden Anvil Sculpture garden, the dive bar Red Hook Bait & Tackle with all of its taxidermies and/or mismatched decor from the 1970s, Red Hook Lobster Pound for some of the best lobster rolls I’ve ever had, all followed by a walk through Carroll Gardens to Boerum Hill for drinks at the lushly-couched yet inexpensive Fawkner’s for beverages, and back to Barclays Center to catch the train home. I think we walked over 8 miles all over the Red Hook and then through Brooklyn from the early afternoon to just before midnight. I was having so much fun that I only really got tired toward the end. 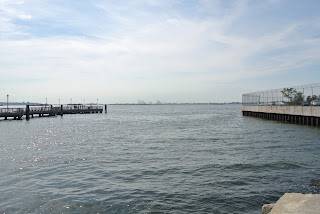 9-My lovely friend J was a production assistant on Project Runway this season, and she invited me to come see the show’s finale during Fashion Week. While I hadn’t watched the show in several years, I loved it as a teenager and I thought it would be a fun experience to give it a shot. I was not just invited to the 9am show during Fashion Week, though—I was invited to the early friends and family showing of the top 4 designers at around 6 am, for which I had to sign a Non-Disclosure Agreement. It was fun to be a part of the process of having it all come together, to be holding a secret and to be legally obligated to keep it! Heidi, Tim, Nina, and Zac all came out at the end and sat in their front row seats and my teenage eyes were sparkling some 15 years in the past. I was sitting in the second row, with one contestant’s family in front of me and one behind me, so when the show aired on December 22 you actually get a couple really strong glimpses at me and my red lipstick when the families are on camera. My mother and my aunts kept pausing the show OnDemand to squeal and shriek whenever they saw me. 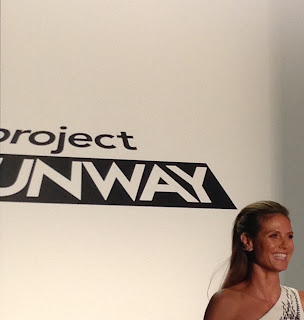 20- The incredible Taylor Mac, who I have written about before, did his opus “A 24-Decade History of Popular Music” at experimental theatre space St. Ann’s Warehouse, a former tobacco warehouse in Dumbo. The premise of the show is that every hour of it is filled with music from one decade, and Mac sings the entire time in an explosion of wild costumes—decorated with hot dogs or porn-covered potato chip bags or chess boards or chicken wire or all of the above, and more—with an orchestra that loses one member every hour. You could also see the History in shorter, three-hour spurts, and I went with DL, the person who introduced me to the fabulous performer in the first place, for “Act III: Puppets, Whitman, and Civil War” in which “Two men fall in love while escaping slavery; Walt Whitman and Stephen Foster go head to head for title of “Father of the American Song” culminating in the queerest Civil War Reenactment in history.” It was incredible, sitting on the floor on pillows looking up at this theatre genius gorgeously challenge our understandings of history while wearing full drag.

25- I had dragged SE to a photography event that ended up being a vicious bore and a waste of time, but he ended up saving the day with some really awesome ideas of what to do afterward. Since we were around Brooklyn Bridge Park, he suggested, instead of waiting hours in what was becoming rather chilly weather for a table at Juliana’s, one of the most famous pizza places in Brooklyn, that we order a pizza to go then sit on the pier and eat it there instead. The to-go order took only one hour versus several, and we walked around the pier and the park exploring and taking pictures while we killed time. Then as it grew dark, we sat on this pier overlooking the Brooklyn Bridge and the lights of Manhattan and balanced this oh-so-thin Margherita pizza from Juliana’s on a bench, sliding it out of its slim wax paper wrapping and diving into its fresh tomato sauce, mozzarella, and olive oil. I’m not too much of a pizza person, but it was absolutely divine…and maybe made me into a pizza person after all. Afterward, SE suggested the Brooklyn Ice Cream Company, in front of which I had seen people waiting all day to get in. But by the time we got there, we simply waltzed in and ordered raspberry rugalach ice cream, chewing on chunks of the pastry embedded in each bite of the dessert. We traipsed back to the F train in the best of food comas. 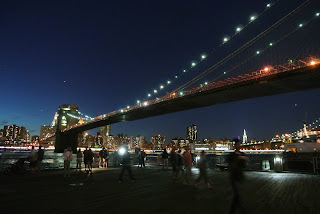 Last but not least, there were also some cool work things that happened this year:

I did my first pieces for Elle and T: The New York Times Style Magazine. I also had a photo I took on the cover of the book The Naked Result: How Exotic Dance Became Big Business by Jessica Berson, published by Oxford University Press. I was a freelance editor at Delish.com; was hired by Sephora to take pictures backstage for them during Fashion Week; did several photoshoots for music website Bandcamp, one for which I spent a day photographing rapper Denmark Vessey in Red Hook eating key lime pies; and got to interview two of my idols, Legs McNeil and Patricia Field. If you’d like to read some of my favorite pieces I wrote this year—including the pieces about Legs and Patricia— here is a link to writer Kyle Chayka’s Year in Review thread on Medium, where he was kind enough to include me.