I will be the first to admit I know at best very little about Brooklyn. I know many people who live there and love it for its affordability in comparison to Manhattan. In my mind, there is absolutely nothing wrong with living in Brooklyn—in fact, I sometimes wish I had the opportunity to go there more often because I’m sure there’s lots of great places I’ve yet to explore. 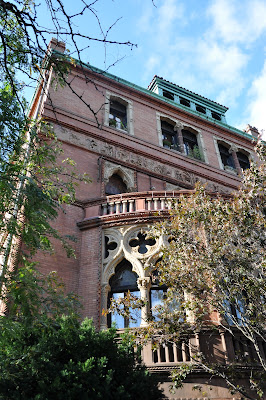 So when I was brought to Brooklyn’s Park Slope neighborhood while working on an article for a magazine, I was pleased to have the opportunity to see someplace new. Walking out of the subway onto Flatbush Avenue and then Eighth Avenue toward my destination, I did not expect to be aflutter with marvelous visual overload. I am a big fan of beautiful architecture, and my walk was a drop-jawed, wide-eyed kid-inheriting-a-candy-store feast of 19th century architecture. Curved windows stacked floor by floor in rusty-red brownstones, home after home nestled by a charming collection of stairs, gorgeously detailed mouldings and windowpanes. I was in the Park Slope Historic District, and I wanted to walk up and down the streets in that area forever.
While forever wasn’t possible that day, I did decide to return later. I won’t lie, part of it had to do with the amazingly unreal coffee I had at Prospect Perk, on Sterling Place just off of Flatbush Avenue. While technically Prospect Heights, the neighborhoods are so close that in my mind it doesn’t really matter (although, having since learned more about Park Slope, its residents might…but more about that soon). The coffee at Prospect Perk is all fair-trade, and it’s an independent business—my favorite kind. I must admit, I am not a super-avid coffee drinker. I like my café au lait from time to time, but I don’t need a cup o’ joe to get my day started. However, when I was in Park Slope/Prospect Heights the first time, I wanted my iced coffee fix. I was rewarded with the Love Buzz coffee which, according to a little sign at the register, was supposed to have undertones of fudge. “Yeah, right,” I thought to myself. How freaking pretentious. But then I tasted the coffee. Mixed with some half-and-half, it was like drinking a creamy, dark chocolate milkshake. No, it was better than a milkshake. I don’t know what it was, really. It was liquidy but thick because of the half-and-half, and the fudge taste made my mouth water even while I was still drinking the iced coffee. This was without a doubt the best coffee I had ever tasted. I would make the hour-ish trip out to Brooklyn for this coffee. 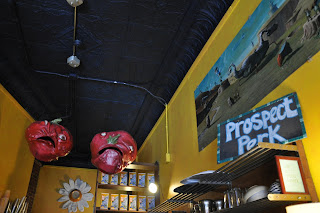 And, last Saturday, I did.
Well, for the most part. I definitely wanted my Prospect Perk fix, but I also wanted to take another look at the architecture in the area, and see what the deal was with all of this Prospect Park hype. Like Central Park, Prospect Park was also designed by Frederick Law Olmstead, this time along with Calvert Vaux. I had heard multiple times that Prospect Park rivaled Central Park in beauty and, as I often do, I wanted to see what all the fuss was about.
This trip to Park Slope, my first stop was at Prospect Perk, this time for a warm coffee drink as we were now fully entrenched in fall (my last visit jean shorts were still de rigeur). This time I went further up Flatbush Avenue to Berkeley Place, and my jaw dropped open again. I had visions of little girls running around in petticoats and pigtails, little boys in overall shorts with cris-crossed suspenders chasing them, mother hens looking down at them from parlor windows in long gowns, long hair bundled and pinned into wispy updos. I felt like I had stepped into another world, and as I continued down the street, it stayed that way. 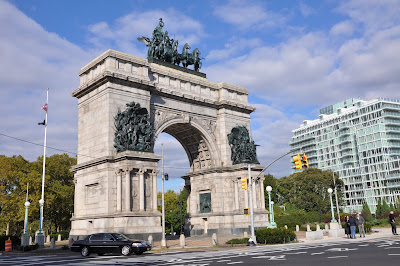 Berkeley Place eventually took me up to Grand Army Plaza. On the crisp fall day, there wasn’t a cloud above, the sky blue and clear. Also designed by Olmstead and Vaux, Grand Army Plaza features what is known as New York’s answer to the Arc de Triomphe, erected for Union heroes of the Civil War. Opposite that is the grand Brooklyn Public Library and, that day, the Grand Army Plaza Greenmarket. The Greenmarket, like the one at Union Square, is home to local vendors of everything from cheese to soap to wool to pumpkin seeds and more. It’s just at the edge of the famed Prospect Park, too.
Instead of going into the park first, though, I instead made my way up Prospect Park West which, from my estimation seems to be a scaled-down version of the homes on the Upper West Side. Instead of immensely tall buildings, the townhomes lining the street are short, but I’m willing to bet they’re still palatial, even comparable to the ones on Central Park West. I am still in awe at the beauty of this neighborhood.
As I walk up this street, I realize something I had been missing in Manhattan—though it was now properly the middle of October, I had not yet seen leaves on the ground, much less changed in color. But Prospect Park West, and Park Slope in general, was swimming in them. Crunchy, brown, yellow, red leaves that are the signifiers of fall were nowhere to be seen anywhere I had been walking recently in Manhattan (I hadn’t been to Central Park in a while). I was shocked at how city living had deprived me of something so inherently Mid-Atlantic. It was, dare I say it, an out-of-city experience. 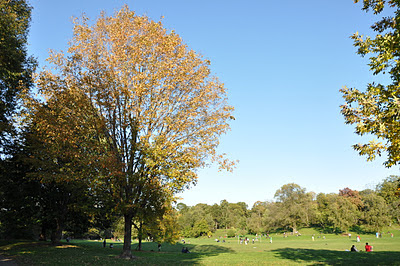 I then ventured into Prospect Park which, it’s true, is quite beautiful. I can’t say for certain whether it’s more beautiful than Central Park because I have just been in Central Park so many times, but I do still think Prospect Park is lovely and would certainly not mind going back. Amidst a big green field trees were on fire with red and yellow leaves; a yellow Labrador ran leashless; a group of young people set up a volleyball court. For a good while I forgot I was in New York, but in a really good way—that way where you feel a bliss of having traveled somewhere new…though you really haven’t traveled that much at all.
It would have been, by all accounts, fair to say that I loved Park Slope. I was not aware, however, of its rather unpleasant reputation for yuppie families and stroller bullies. As my friend AD says, “It’s kind of the douchiest part of Brooklyn.” The same sentiments were echoed by Lynn Harris in her 2008 New York Times article “Park Slope: Where is the Love?” Sad times! My love for the area was based mostly on the architecture, superficial, I know, so I do still feel justified and not like a douche in liking it. Though I would never actively choose to be anywhere near someone pushing a $500 stroller while bragging about their English Lit degree from Williams College. What I can hope, though, is that if I ever move to Park Slope, when I get there all of these stroller bullies will be living in Westchester. Maybe the suburbs are good for something after all.
Posted by miss-manhattan at 1:43 AM No comments: