You can make all the “cunning linguist” jokes you want to Todd Snider, but I promise you he’s heard them before. I got bored of making them several years ago and our friendship is better for it. Because Todd is, in fact, a linguist. Absorbed by the puzzles of language and the straightforwardness of mathematics, perhaps he has always been.

Todd found his linguistics path in a class called “The Nature of Language” we took freshman year of college. While it dissolved my brain into a puddle of tears covered in dust, he loved it. Todd got his Ph.D. in Linguistics from Cornell University in 2017, minoring in Cognitive Science. He is now a Postdoctoral Research Fellow at the Hebrew University in Jerusalem’s Language, Logic, and Cognition Center. He is interested in “the semantics and pragmatics of natural language,” or how meanings interact with context and with each other.

Todd lives in Israel currently and is in New York only sparingly. I am lucky, then, that I get to spend a chunk of the day with him. The data on Todd’s phone is not functioning currently due to international cellular phone nonsense, so he’s written down some places he wants to go. It is 11 am but I have no qualms about indulging in a blueberry lemon cupcake with him at Georgetown Cupcake.

Post-cupcake, we trot across Soho to Warby Parker, where Todd is curious about getting some new frames. After several (often hilarious and purposeful) failed attempts on both our parts, we find a pair that works--distinguished yet hip-but not-in-an-obnoxious-way rectangular black frames Todd resolves to procure at a later date.

At 2 pm, Todd has an appointment at The Black Tux to rent a suit for our friend’s wedding, so we continue to poke around Soho for a while. Our travels take us to Rudy’s Music, a legendary guitar emporium filled with all iterations of the curvaceous, glittery, colorful instrument, and to Rowing Blazers, a shop of preptastic garments designed primarily for the younger set. Todd tries on several blazers, one of which is great. The others just make us laugh. I remember the days when Todd used to wear baggy t-shirts and carpenter-esque jeans. These days, to my utter delight, he opts instead for button-downs and slim-cuts rolled at the ankle. He knows what a “front tuck” is and references Tan France more than once.

The Black Tux time has come, and before the appointment Todd works on a crossword puzzle on a whiteboard in the waiting area. Soon he slides elegantly into a black suit that needs only a few alterations. And now, since the grand suit experience is complete, we can eat. It’s a short walk to the aptly named Vegetarian Dim Sum House on Pell Street, where we can and do indulge in all manner of meatless extravaganzas as well as several pots of tea. Vegetarian dim sum is hard to find in New York, let alone Israel. I’m so glad he’s here. 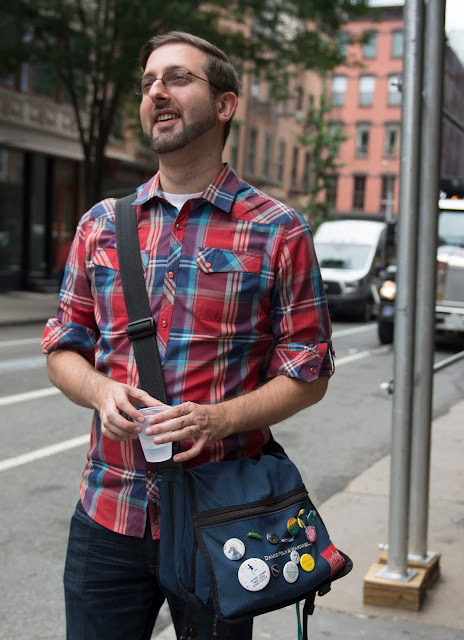 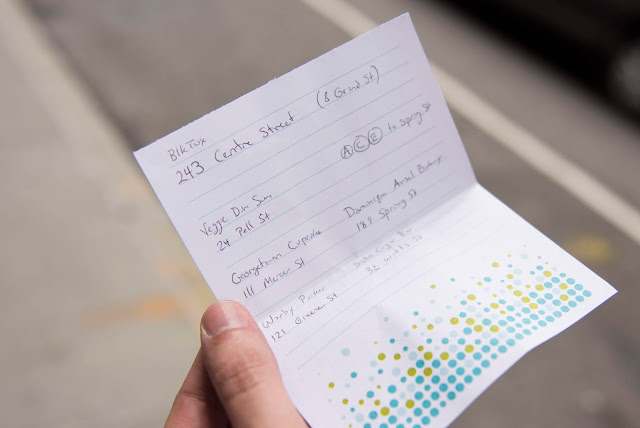 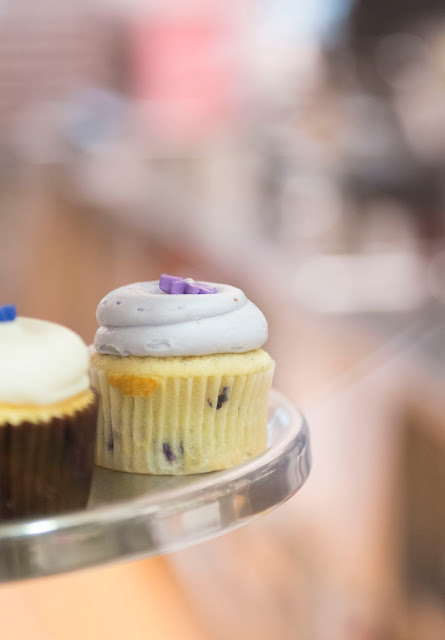 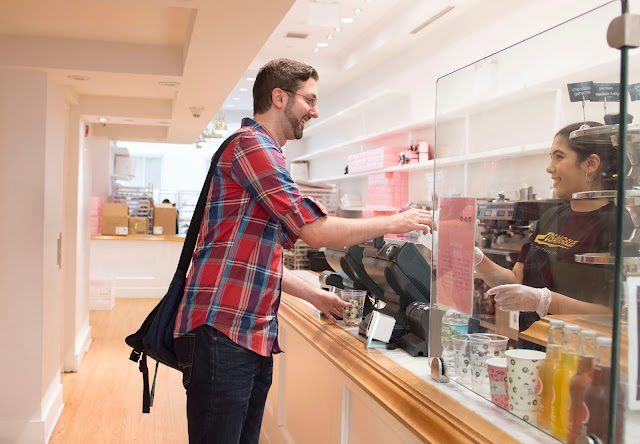 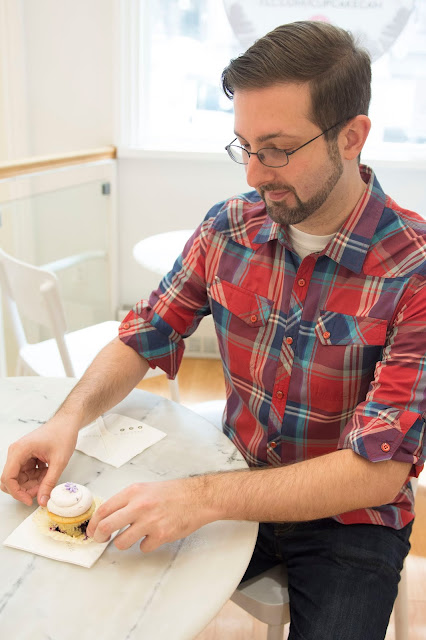 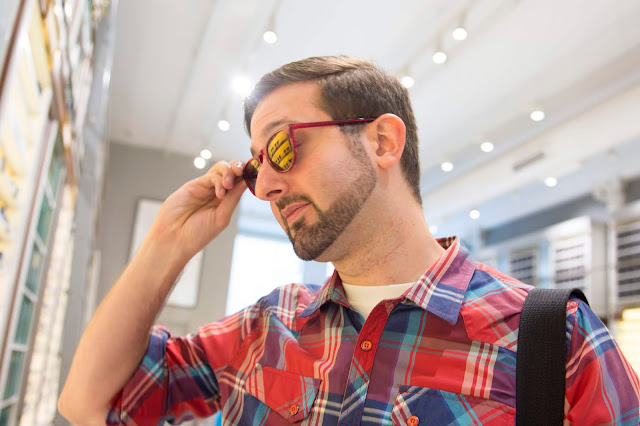 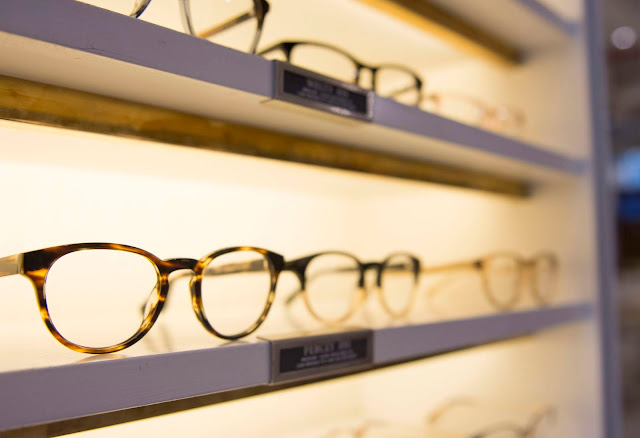 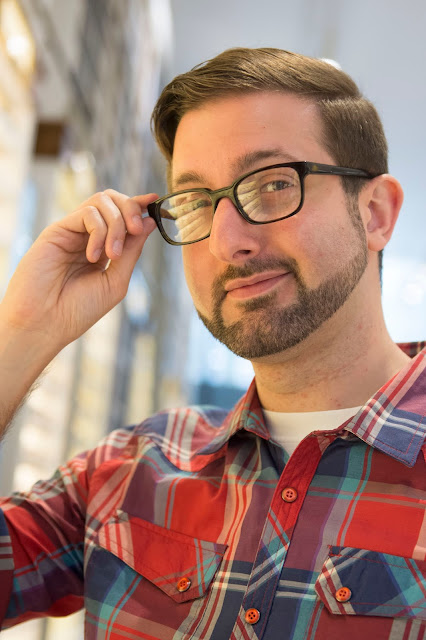 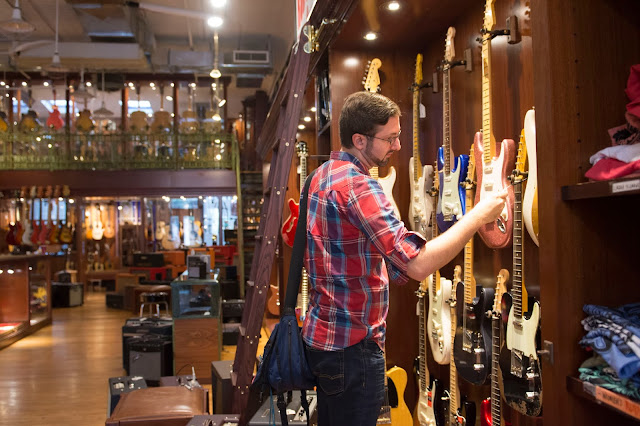 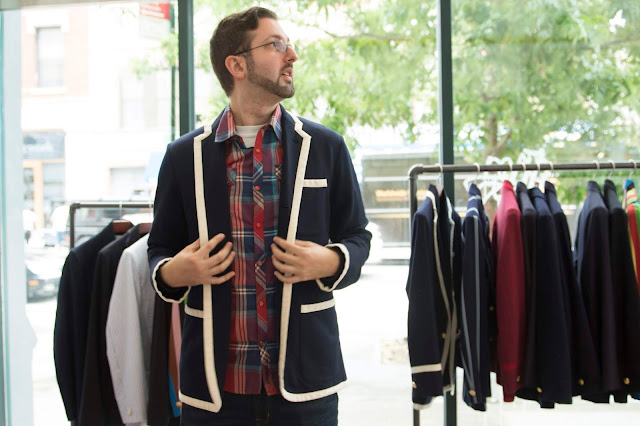 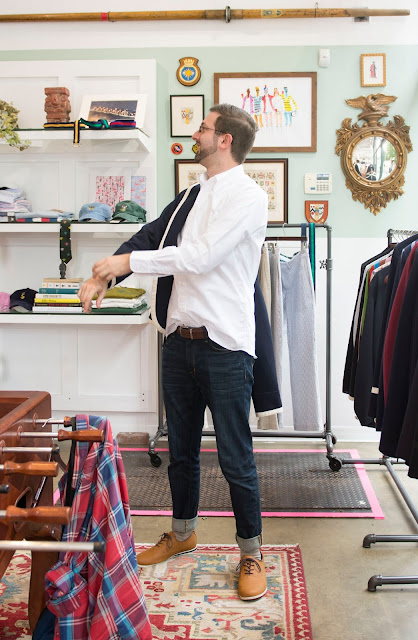 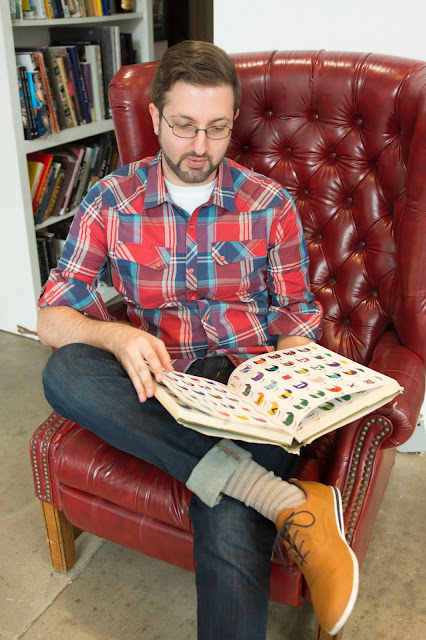 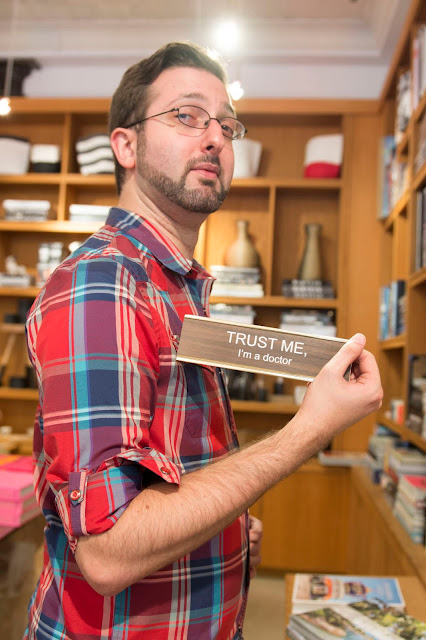 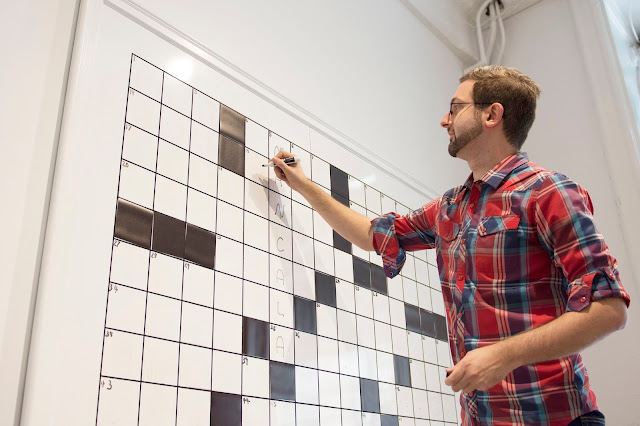 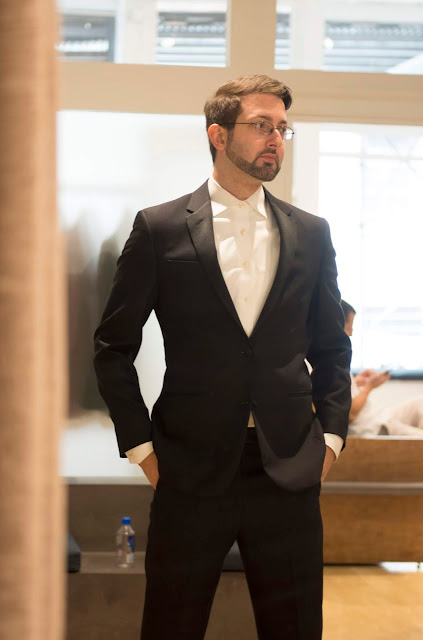 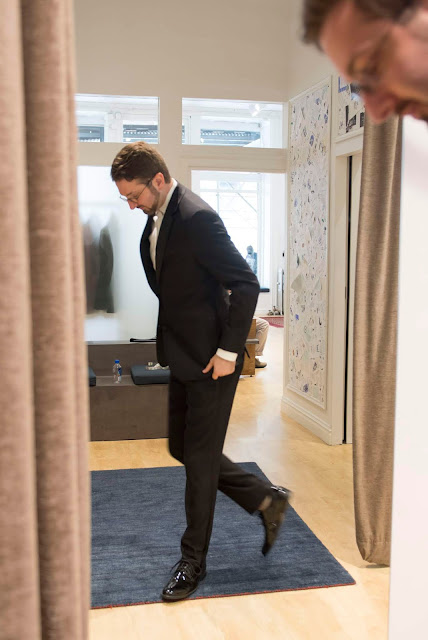 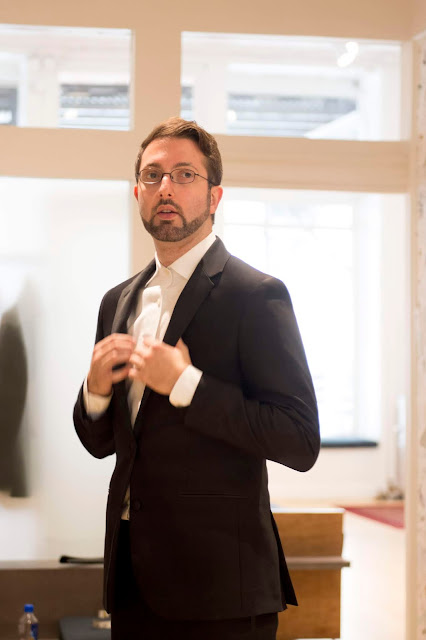 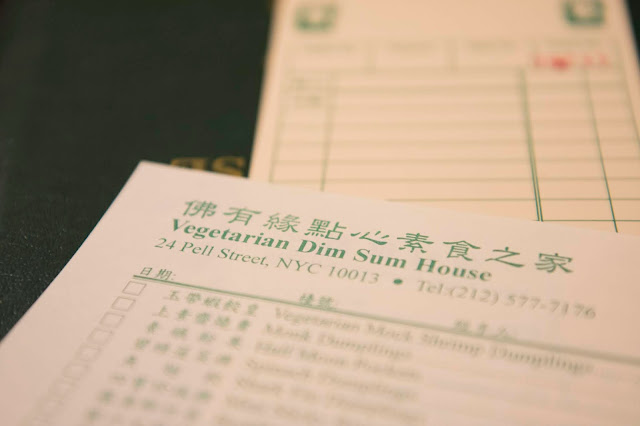 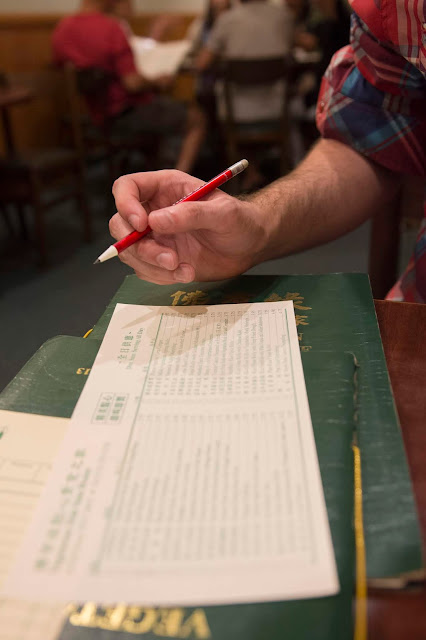 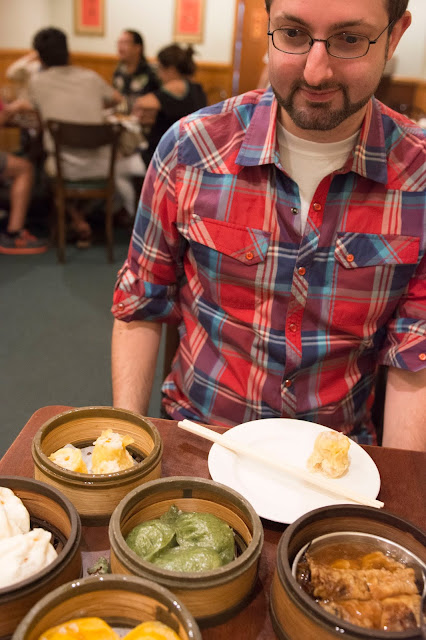 Posted by miss-manhattan at 11:08 AM No comments: