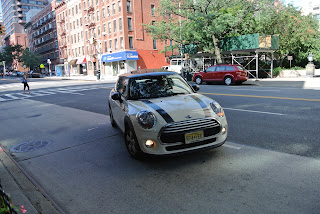 At 9:30 am this past Saturday, a white Mini Cooper rolled up to my apartment building. In the driver's seat was SE, Ray-Bans perched on his face, one hand perched confidently on the wheel. In the mere moments I was outside the steaming humidity swallowed me whole and I was relieved to plop myself in the rush of air conditioning inside the car. We plugged in our tunes--which would evolve throughout the day from The Black Keys Pandora radio station to a medley of Ben Folds and No Doubt anthems to yelping pop punk songs from our pseudo-emo youth--and made our way to upstate New York for the day. 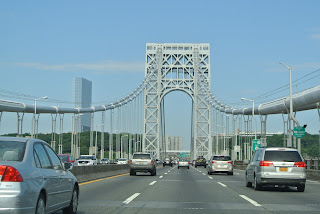 Though we had to pass through the corporate suburban wasteland of New Jersey first, where Targets and Kohl's and Houlihan's and, yes, even TGI Friday's peppered the landscape instead of...anything else, we eventually arrived back in New York. Outside of the city by probably a little under an hour, New York is a curling highway running through mountains and rock and forest. It is green and spread through with country roads, the occasional log cabin, and the occasional Donald Trump sign. At one point, though, as if we turned some magical corner, the Trump signs evolved into gay pride flags and  I felt like we were back in Manhattan, but with far more trees and Grateful Dead paraphernalia.

We had gone upstate, to the New Paltz area, to visit the Hudson Whiskey Distillery at Tuthilltown Spirits. We were to arrive and take a tour of the facility, have a whiskey tasting, then lunch at the former Tuthilltown Grist Mill turned restaurant next door. But we arrived to the area a bit early and instead poked around an antiques store. Musty toys (like Barbie Paper Dolls from the 1960s and even an NSYNC marionette) and glassware and jewelry ran through the store, chaotically shelved together to fit as much as possible in the tiny space. I ended up with a copy of James Thurber's The Thurber Carnival from the 1940s and a Lake Placid Olympics pin with a tiny athletic raccoon printed on it, courtesy of SE, who also did not leave empty-handed, by way of a petite American flag pin. 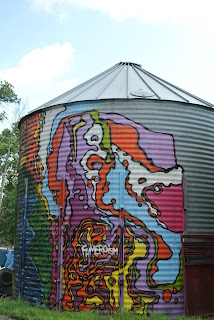 Outside of the antiques store were signs for something called the Sunflower Arts Festival, which happened once a year. We resolved to check it out after our tour, but upon pulling up to the distillery we realized it was in the field mere steps away from the distillery's front door. We were still early when we arrived, though, so we decided to poke around. Tall, circular metal structures at the distillery were painted over in a splash of bold, colorful designs, and around the corner at the fair there was a music tent, an array of standalone "ghost" doors painted in an explosion of bright colors as if they were canvases. 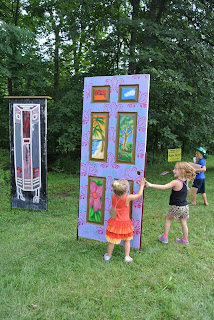 Next to those, artists spraypainted murals onto canvas (one of them later turned out to be the famed (Meres One, founder of the dearly departed 5 Pointz aerosol art project in Long Island City, Queens). In some tents nearby, local artists and children painted still lives of sunflowers, people sold handcrafted jewelry, baked goods, home-bottled hot sauces, dried lavender, and a host of other goodies. People sat on a sloping hill dotted with planted sunflowers and listened to the band, some young women hula-hooped to the strum of their guitars, running for shelter when a rather heavy sunshower reared its head. There were more piercings and tattoos and tie dye than I expected for upstate New York (I was more prepared for the Trump signs, quite frankly), but SE told me the area is known for its crunchy, granola spirit. Who knew? 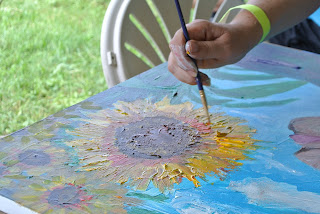 Shortly after we went into the distillery for our tour, led by a man named Lion with a skull tattoo and several ear piercings. He walked us through the whiskey's development, from its history as a distillery to its beginnings as grain to a fermenting mash, to a boiling liquid to a cooled liquid to a barreled liquid to a labeled and sent off liquid. I marveled at the structures and containers used for everything and I felt like I was in a sort of steampunk factory fairyland, everything a hooting and churning or pumping brown or silver metal. My favorite part was seeing all the barrels used for the stuff, how each one is filled up with a gas station-like pump labeled with a date and was from a different cooperage in the country. 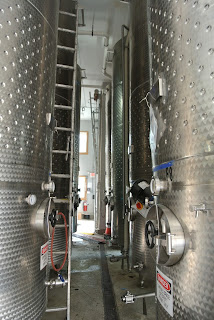 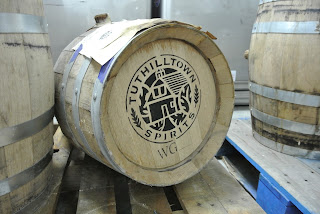 Post-tour, it was time for our tasting, where we were able to sample all the beverages produced at the distillery, whiskeys and ryes as well as a delectable cacao liqueur, blackberry cassis, and bourbon maple syrup. I slurped the latter out of a tiny plastic cup as if I were coaxing cough syrup onto my aching throat. I can still taste it. 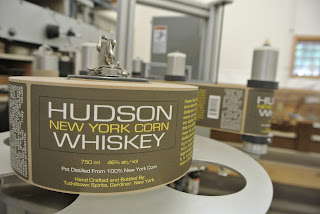 Post-distillery, we made our way to the adjacent Tuthill House restaurant. As I mentioned, it's a former grist mill, so it was perched on top of a gorgeous waterfall flowing over shiny rocks. Inside I had one of the best cocktails I have ever had, called the "Beet Poet." It featured, I quote, "Walnut & Pistachio Infused Indigenous Empire Wheat Vodka, Beet, Black Peppercorn, Fresh Lemon, Ginger." Praise be to our lordess and savoir RuPaul, did that make the simmering heat outside feel like it had disappeared (the buzz it brought on was not unwelcome, either). We dove into burgers afterward and had another gander at the Sunflower Festival before driving home.

Well, not entirely "home" home, though we did head back to the five boroughs. We realized that since we had purchased the car for the entire day, we should really make use of it and go to a place for dinner we wouldn't normally be able to get to as easily without a car. We chose Arthur Avenue in the Bronx for Italian food, specifically the restaurant Mario's. My father had grown up going to eat Italian food with his family there and parts of The Godfather were filmed there. We dove into an herbed carrot salad and seeded bread and olive oil and caprese salad and chicken scarpariello and tiramisu and all of it was simply heavenly. Dessert still on our lips, we walked back to the car, lolling and sated, a day of whiskey and sun behind us.
Posted by miss-manhattan at 12:33 AM No comments: