From the sounds of this title, you may have some horrible idea in your head that my eyes have fallen out and I miraculously found new ones. Praise the good Lordess RuPaul, that is not the case, kittens; it's merely a metaphor. You can take your gasping face off now.

What it does mean, though, is that I was having some trouble with New York. The trouble was that I was seeing and experiencing and doing a lot of the same things and nothing was feeling beautiful and sparkly anymore. But when something is as you don't want it to be, you simply have to change it.

The first instance happened a few weeks ago, but then Fashion Week started and I never got a chance to write about it. On a particular Saturday, I woke up with no plans, an unusual occurrence to say the least. And then I remembered what I used to do before I had plans every weekend and I wanted to go out and see what was happening: I simply looked in Time Out New York. On the list of events, as it is every weekend until it gets cold, I saw Brooklyn Flea. It was one of those cases of saying to myself, Oh, I love Brooklyn Flea! But I never go! So I decided to go. I used to have a meal before I went out to save some money, but today I thought I'd check out some of their amazing food vendors. I was not disappointed.

The food that sounded the best at Brooklyn Flea, which on Saturdays is the Fort Greene location (my favorite! At this rate you'd have to pay me to go to Williamsburg.), was the brisket sandwich at Lonestar Empire. It also had the longest line. I decided to wait because I didn't really have any place to be and upon reading the words 'brisket sandwich' I developed a Pavlovian drool. They carve the brisket, covered in a thick blackened crust of spices, right in front of you and serve it on a potato roll. Pickled onions and cucumbers are available for sides, as well. It fell apart in my mouth, savory and smoky, complemented by the softness of the roll and the tang of the onions I chose to put on it. I sat there in bliss, licking my fingers. So far, this trip out to Fort Greene was totally worth it.

I then perused a variety of wares both new and old. I knew there was a man who sold vintage Playboys, which I have always flirted with putting on my walls as decoration--only the cool ones from the early 1960s, though, not the trashy ones from the 1970s+. I was out of luck for that day, but the gentleman did happen to have a 10th Anniversary copy of Rolling Stone from 1977 with 50 pages of photographs by Annie Leibovitz and an essay by Hunter S. Thompson. I left it there casually, though on the inside I was leaping about like a banshee. OH MY GOD ANNIE LEIBOVITZ AND HUNTER THOMSPON OH MY GOD. I came back like a cool customer an hour or so later and managed to talk the gent down in price. The magazine was mine! I'm reading this and realizing how much of a nerd I am, but to each his own, no? Everybody loves something weird. I also managed to snag a vintage Photoplay magazine from 1939 with actress Norma Shearer on the cover. After I bought that, I left because I was worried one or both of the men who sold me the magazines would realize what fools they were for selling these to me at such low prices and come running back. They didn't, of course, but it was fun to think they might, that I might be a fugitive from vintage magazine justice.

In the thick humidity of the day, I decided my next stop would be for ice cream. I heard of Brooklyn Farmacy, an old-fashioned ice cream parlour, right when I moved to New York (it opened the spring before I moved here) but had never actually gone. Seeing the location of it was off the G train, and knowing that I try to never take the G train unless absolutely necessary, I decided to walk there instead. It would be about a 40 minute walk, through Fort Greene and Boerum Hill, but I love walking and I decided to explore. 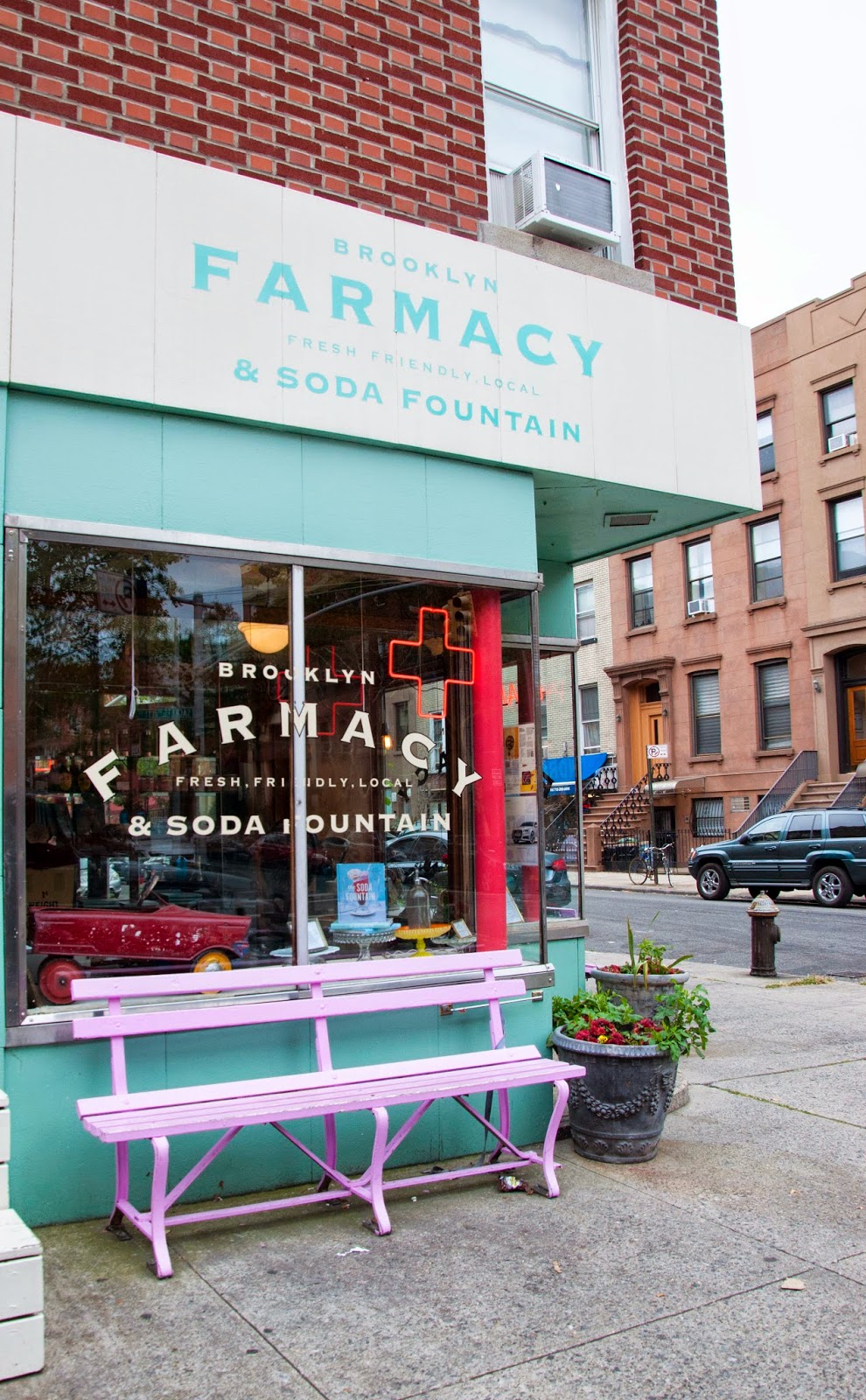 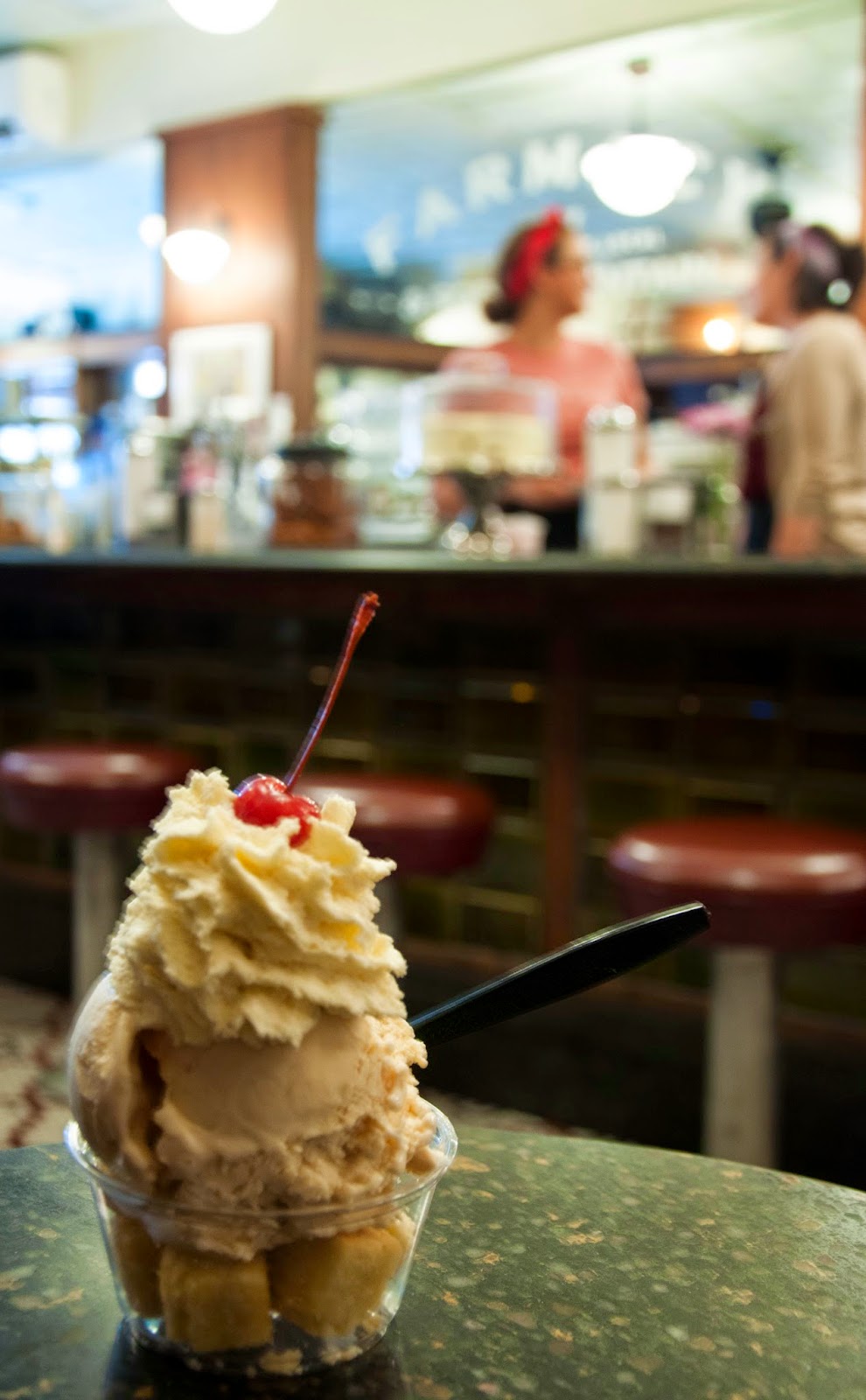 Eventually I got to Farmacy (I think the walk would have felt shorter if I knew where I was going!), and I was immediately enthralled with the exterior: mint and white, with a neon red cross in the window. The space was actually an apothecary in the 1920s and retained all of its interior architecture--with the help of a few construction angels (read more of the fascinating story here), the business got off the ground in May 2010. Swivel stools line the bar, and the soda jerks wear white paper hats, while the jerkettes wrap a bandanna in a bow around their hair. I order a children's sundae, with homemade strawberries and cream ice cream, shortbread cubes, homemade whipped cream, and hot fudge on the side. The shortbread comes on the bottom, the ice cream on top, followed by a mountain of whipped cream (you can see the flecks of vanilla bean in it!) and, of course, a cherry on top. I taste each individual part of the sundae, and the ice cream is easily some of the best I've ever had, strawberry or otherwise. The flavor is sweet but subtle, quite literally "strawberries and cream." The whipped cream is fresh and sweet, squeezed right from a paper bag onto the sundae. I am actually, absolutely in heaven. Like the flea market, it's easily something I'd have no problem schlepping all the way to Brooklyn for. The humidity outside seems to have disappeared, and all that exists is this cool treat that made the walk totally worth it.
Posted by miss-manhattan at 1:30 PM No comments: