My usual impression of the holidays involves Christmas lights wrapped around palm trees, so being in New York during the holiday season is a whole different animal. Christmas trees line the streets, smelling all pine-y and green (yes, they smell green), reminding me that in some places the holiday does not smell like sea salt. In New York, stores littered with usually a person or two are packed to the gills with customers, and midtown is filled with tourists all hoping to catch a glimpse of the famous tree at Rockefeller Center. People go ice skating at the rink, pop into Serendipity for a Frozen Hot Chocolate, rush about Bloomingdale’s in a frenzy trying to find the perfect gift. And then there are the holiday windows.

I was familiar with Christmas windows as a general concept from once going to Pittsburgh’s Light Up Night at the beginning of the holiday season, when the department stores downtown display their windows for the first time. There are animatronic robots and tons of color, tinsel, glitter, the works. It’s definitely cute, but I never thought it was beautiful, per se. Then there were the windows in New York that my mother always used to talk about. I pictured her seeing the windows at Lord and Taylor and Macy’s as a tot, eyes dancing with visions of elves and Santa Claus and snow. I looked forward to seeing some of these New York windows and maybe having a similar experience.
I got a chance one evening when HL came in to visit. When I picked her up from Grand Central and asked her what she’d like to do, she replied happily, “Well, I haven’t seen too many Christmas decorations yet.” I knew what we had to do. We did Rockefeller Center of course, but then made our way to Saks, whose windows featured gorgeous designer gowns in scenes with more animatronics, plastic bubbles and hot air balloons. Again, it was just cute. But then we made our way to Bergdorf Goodman. 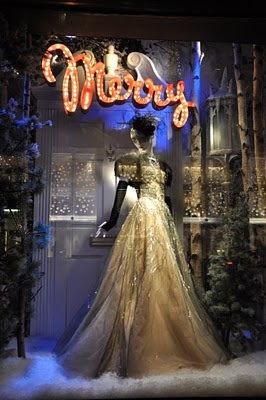 The corner of 57th Street and 5th Avenue is a hotbed of Christmas sparkle. A giant glittering snowflake is suspended in the middle of the intersection, Tiffany’s is covered in a blanket of white Christmas lights, a high-fashion fifties-style fashion model light installation graces the front of Dior. But Bergdorf’s, also on this corner, is by far the most beautiful. 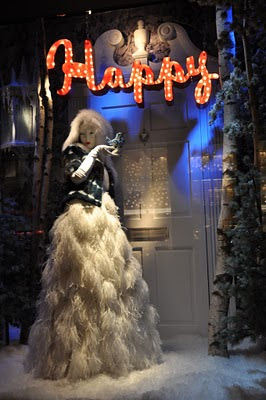 Every single window wrapped around the famed high-end department store is filled with a visual feast. In the 57th Street windows, a collection of neon lights and snow wishing happy holidays rest alongside mannequins in elegant coats and ballgowns.


It is the windows on 5th where the store truly shines, though. Entitled “Wish You Were Here,” each display was assembled along the basic theme of travel—airplanes, trains, boats, cars, horses, rocket ship, you name it. Designed by Bergdorf’s Director of Visual Presentation David Hoey and a talented team, the windows are a clever collage of color and sparkle. Bergdorf’s is well-known for its window displays year-round, many of which take years themselves to produce. This is because the fine visual team at the store spares no expense in making them. Here’s a behind-the-scenes video about some of what goes into the process of putting together the windows:
I feel like description really won’t do them justice, so I’ve included pictures. My favorites were the boat and rocket ship windows, so intelligently designed and filled with the most strange and wonderful details: a toy iguana painted silver, a jewel-encrusted toy alligator, a sailor suit made entirely of sequins. Nothing was placed in any particular location by accident. The store takes holiday decorations to a high-fashion level, where even the mannequins are gorgeous and elegant. At Saks I just felt like I was looking at Christmas windows, but at Bergdorf’s I felt like I was looking at art. 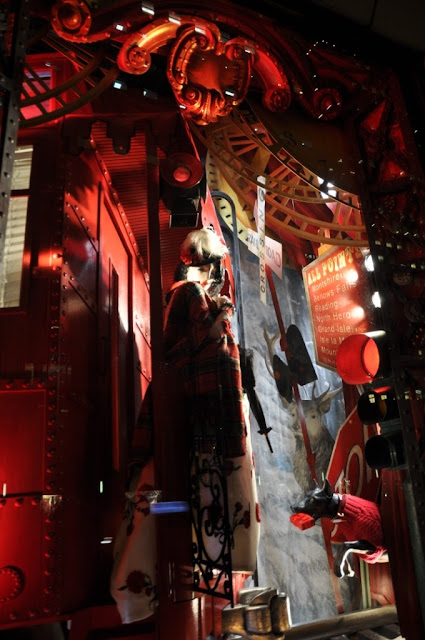 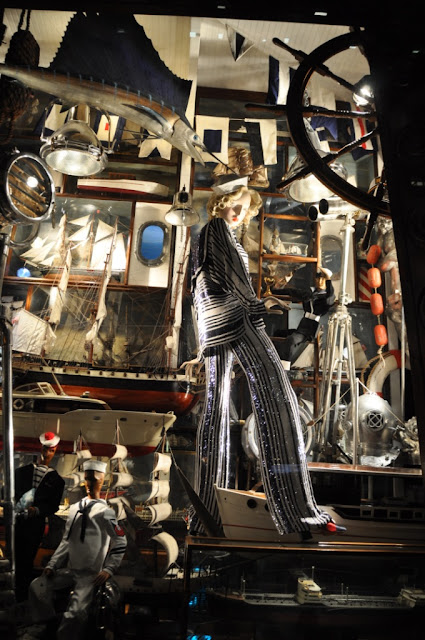 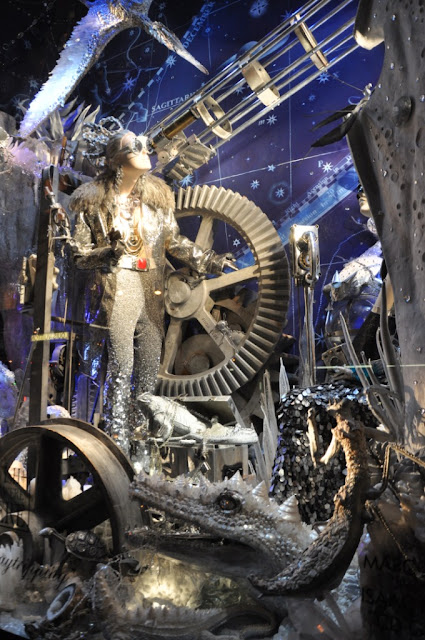 Truth be told, Christmas never really meant that much to me because I don’t celebrate the holiday, but when I was standing in front of Bergdorf’s taking pictures I felt a little differently. There was a team from a Japanese television station in front of the store asking people about the meaning of Christmas, what their wishes for the world are, and so on. They asked me and I heard myself say, “Well, I don’t celebrate Christmas, but the holidays to me are a reminder of our happiness. My wish for the world is to find beauty in the everyday, to appreciate the little things that make life wonderful.” To me, because every tiny detail in the window displays was as beautiful as the bigger picture itself, it seemed like this was what Bergdorf’s was trying to tell us, too.
Posted by miss-manhattan at 3:05 PM 1 comment: