“Are you in love?” Julia asks me.
Light of heart and free of spirit, this question was quintessential Julia, who always wants people to be loved. Julia Easterlin is an incredibly talented musician and dear friend who reappeared in my life on Wednesday courtesy of Facebook and the Lower East Side (again, normally I don’t use names, but I want you to know hers and listen to her music!). I hadn’t seen her in a little over five years and we were both intent on catching up on each others’ lives.
At 9:30 that morning, I checked Facebook and was delighted to see Miss Easterlin had invited me to a performance that night in my fair Manhattan. I instantly made plans to see her. “HOLY MOLY I AM SOOOOOO EXCITEEEEEEEEEEED. OMGOMGYAAAAAAA” she said.
That’s what I love about New York—everyone comes to visit. Somehow, even if it’s been years, you sit, you have a drink, you talk, and the years fall away.
Julia and I sat at a little brown table in Googie’s, a small music venue awash in blue light where she was playing a show that evening. Googie’s sits quietly atop the famed Living Room bar and concert venue on 154 Ludlow Street, and waitresses will climb 32 stairs to bring you a beverage. There are six of these little brown tables in Googie’s, with the occasional couch, bench, or futon close by. On the small stage, there is a glossy baby grand piano that must be yellow in real life because looks sea green in the blue light. Dark curtains dotted with white Christmas lights hang in the back over the windows. It is a sweet, intimate little venue.
Julia spilled about her life, her music, her travels, and I was so excited to hear all of it. I was also excited to hear her sing again. When we were 15, Julia gave me her demo, a soulful collection of songs she sang accompanied by a guitar. And if she was that good when we were 15, I thought she would be even more fantastic now. I wasn’t wrong. 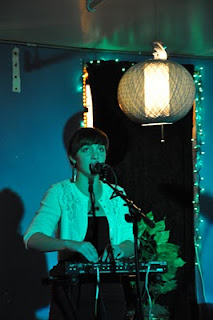 Julia got on stage and sang even more beautifully than I remembered in a soul-y, folk-y, jazz-y voice as rich as dark hot chocolate. This time, though, instead of accompanying herself on guitar, she accompanied herself with…herself. Julia used a looper pedal, which allows a musician to instantly record and replay parts of a song, to record her own hand claps, snaps, and vocal beats. She then replayed them and sang over them. Then she recorded that part of the song, replayed it and harmonized with herself. In the best way possible, my brain went “Whaaaaat is happening??? This bitch is fierce.” It was literally like watching (and listening to) magic happen. Listen for yourself at www.myspace.com/juliaeasterlin.
Julia was in Googie’s and in New York that night courtesy of Monkey Rock, a weekly singer-songwriter show produced by musician and Berklee grad Tommy Bohlen. Monkey Rock began in Boston as a “community comprised of artists and friends from all over the world who support each other by promoting and performing as a group.” Now, though, there’s a Monkey Rock show in New York, every Wednesday from 9-11:30pm. Talented musicians, like Julia and fellow musician Nathan Reich (www.myspace.com/nathanreich), make beautiful sounds with guitars, pianos, looper pedals and much more, so if you’re in the mood for a (free!) relaxed evening and you like good music, check out the Monkey Rock show www.monkeyrocknyc.blogspot.com/. 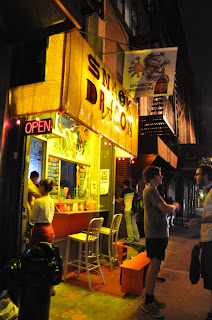 After a fantastic show, we were feeling snacky so we drifted a block over to a brightly colored hole-in-the-wall taco joint called Snack Dragon. Open til 4am most nights, Snack Dragon offers inexpensive Mexican-style yummies like chorizo tacos and nachos. It is also home to the delicious Slayed Dragon, which is made with shredded marinated pork and not actual dragon. We sat outside at a lovely little blue picnic table underneath a ginkgo tree wrapped in red Christmas lights and ate our inexpensive, delicious treats. Julia and I poked at our plates until every last black bean was gone and the tortillas holding them were merely a memory. Though tasty sober, I imagine it is also amazing, amazing drunk food.
I decided all Wednesdays should be filled with good friends, good music and taco joints. But then I wondered...why just Wednesdays?
Posted by miss-manhattan at 7:59 PM No comments:

In Women We Trust

There are few reasons to get out of bed before 6am: catching a plane to somewhere fabulous, a small fire in your home, a hurricane.
And Donna Karan.
At 6:45 a.m, I slid into my black trench dress, pearls and heels. I fluffed my hair and looked in the mirror. Ready? Go.
I checked in to the Women: Inspiration and Enterprise Symposium at 7:30 am. The symposium itself was created to gather creative women in hopes of letting them meet and work together to influence societal change and inspire further generations of women. The WIE Symposium was also partnered with the White Ribbon Alliance, which raises awareness of the 600,000 women who die each year due to pregnancy-related complications around the world. It was genuinely an honor just to be there among women who were really making a difference across the globe like Christy Turlington and Queen Rania of Jordan. I am so glad I was able to be there, even for a few hours.
I was there as a guest of the founders of Her Campus.com, the online college women’s magazine for which I am Style Editor. Fabulously enough, the founders of Her Campus.com had been chosen to speak on a Young Innovators panel that day, and had invited me to attend the conference with them (another major win for living in New York!).
When we were getting our tote bags filled with endless amounts of goodies, though, I saw her. She was very darkly tanned and was wearing a thick coat of foundation. Eyes were smudged black with eyeshadow and reddish-chocolate hair curled on the side of her face. She was wearing all black, black tights into black boots and a black dress with a black cardigan and a string of thick black leather beads. I had just written about how much I loved her Spring 2011 collection and there she was. Donna Karan. I knew she was going to be there because she was a host of the event, but I didn’t think I’d actually be standing there meeting her, breathing the same air as her.
But then we Her Campus girls introduced ourselves and I heard the most amazing words, delivered by Her Campus’s publisher:
“This is our Style Editor, Elyssa.”
I have heard these words before, but they have never sounded so beautiful as they did when I shook hands with Donna Karan. I, Style Editor of Her Campus.com and recent college graduate, was shaking hands with one of the great divas of American fashion. Was this my life? Was this real? Would I suddenly wake up at 6 a.m. wondering why the crap I had woken up then fall back asleep for another three hours like I normally would have? No.
I smiled and politely said hello, though my brain was actually lodged inside a giant bounce house going “DONNA KARAN DONNA KARAN DONNA KARAN OH MY GOD” over and over again. I swear, I could have left at that instant and been happy, even though I spoke to her for all of five seconds and rode in an elevator with her for all of two minutes.
But later, inside the green room, some of the world’s most powerful women were walking past us every second as we sat and waited for the conference to begin. I realized meeting Donna Karan would not be the only highlight of the day. The three hosts of the event were Sarah Brown, wife of former UK Prime Minister Gordon Brown and the Chairwoman of the WIE Symposium; Arianna Huffington, of The Huffington Post; and the aforementioned fashion icon. The three ladies spoke about the power of women, what it means to be a female leader today, and how we as women can make a difference in the lives of other women (note: there were no men allowed at the conference except press).
One thing I distinctly remember is Pat Mitchell talking about the news world when she first started in the 1970s. There were almost no news stories about women anywhere on television. But today, stories about women are still only about 16% of everything aired. Can you imagine, still only 16% some thirty- or forty-odd years later? It’s unsettling, because usually we think we’ve come so far—but things like this remind us that there’s still a huge gender gap.
Additionally, Arianna Huffington talked about “self-expression as the new entertainment,” where we’re actually producing something and sharing it with the world instead of just sitting on our butts watching television for nine hours. It made me feel less vain for having a blog and a part of something bigger. Especially when BlogHer founder Lisa Stone said that even in areas where it’s very difficult to get internet access, women still outnumber men as bloggers. Food for thought (and food for blog).  For me, the WIE Symposium reached its goal—it was definitely inspiring. It made me think more about what I want my life to be not just as a person in the workforce, but as a woman in the workforce. What can I do to inspire generations of women, too?
And of course it was nice to see the Her Campus girls go forth and be awesome in their own panel, speaking eloquently and elegantly (in true Her Campus fashion) about what it’s like to start a magazine in the changing face of media. I was even more proud than usual to be a part of the team. It’s crazy to think that a year ago it was this tiny website, but is now gaining more and more national recognition every day. Way to go, ladies! And thank you again for an incredible day.
Posted by miss-manhattan at 11:43 PM 1 comment: