I have been remiss in not writing my annual birthday post, so here we go! 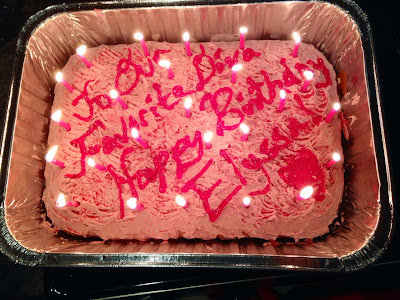 November 2
I celebrated my 25th birthday! And I sort of had a birthday week because why the hell not?

I took my annual birthday trip to Bloomingdale's and got myself a lovely sweater coat, followed by a trip to Dylan's Candy Bar for gummies and yummies, and Serendipity 3 for the ridiculous/sublime/ridiculously sublime Cleopatra's Barge: potato skins topped with sour cream and caviar with a side of red onions. I'm 25, health be damned! Then, later...

"How hot are we getting tonight?" SD asked me via text.
"How well do you know me?" I said.

I texted AS: "In case it wasn't already implied, dress code for tonight is 'look hot, betch.'"

By accident I ended up eating my Dylan's Candy Bar loot for dinner. Nothing says adulthood like caramel creams for an entree.

That evening, the ladies stepped out, heels and all, downtown. The first stop was Decibel, the rad, red-lit, underground sake bar where the waiters all seem kind of pissed at something but don't really take it out on you. We had octopus sushi in wasabi sauce, a variety of dumplings and a laahhhhhge bottle of sake. Even sipping little bits from those teeny glasses will get you a little more than buzzed (well, me anyway). "You know how I feel about drunken women," my mother said. "But one only turns 25 once..."

Next stop was The Slipper Room, the newly refurbished burlesque house on the Lower East Side. We hooted and hollered at fierce ladies being fierce, jiggling like there was no tomorrow. I was a little worried because it was EL's first burlesque show ("What is burlesque, exactly?" she asked) but she loved it! Another convert to what I feel is a sexy, empowering performance art. Huzzah!

After the show, we left to find another bar, but SEP stopped me. "I know a guy who can get us drinks for free," she said. I figured she knew someone who would be nice and get us a couple of cocktails, but  she actually knew the manager of Beauty & Essex, a rather swank restaurant and bar on the Lower East Side. We ended up getting a table and champagne bottle service. For free. They brought one of the champagne bottles over with a giant sparkler in it and everyone sang happy birthday. I never pictured myself as a lady having a birthday 'at the club' but there I was, and there we all were, and it was marvelous. It was followed by a rather drunken bout of disco fries (cheese and gravy...I know...) at the brilliantly 24-hour Remedy diner and a rather sleepy cab ride home. I even wore my heels the entire time! Like a champ.

November 3
November 3 is my actual birthday, and it was the perfect day to take it easy and relax. Even if that wouldn't have been what I wanted to do, I would have had to because it was the day of the New York Marathon! The marathon runs directly past my house, so there was no crossing the avenue that day to get to the train and go anywhere in particular. It was fine by me, though, since DL was running the marathon! All morning I tracked his pace then did some rough calculations to see when he would be running by me. Luckily, and much of a surprise to the math gods as myself, I did it right and waited for him out by the barriers, brightly glittered sign in my hands saying "Go DL Go!". I had made it the night before, before going out, so there was glitter all over my apartment. Since we checked in before, he knew where to look for me, and soon enough he found me. I got a picture of him and he wished me happy birthday. I have to say, it's one of the best birthday presents I've ever received because it's so unique--I don't know if he'll run the marathon again, or if I'll even be living in the same place, so it could very well be a once in a lifetime opportunity to be wished happy birthday in the middle of the marathon! I was so proud of him. The magnitude of what these people are doing doesn't really strike you until they run past you and...they just keep going. I don't know if they're crazy or brilliant. Or a combination of the two.

Then I went to eat my favorite omelet, granny smith apple, cheddar cheese and chicken apple sausage, at my favorite brunch spot, The Barking Dog. I went for a walk on the East River and read a book. That evening, MDP brought me flowers and sat on my couch eating Chinese food.

November 7
My bro (yes, I said bro) BK took me out to new restaurant Empire Biscuit for my birthday. It's a 24-hour biscuit joint, with rad homemade biscuits, biscuit sandwiches, gravies, spreads, and god knows what else. We sat and had girl talk at their long wooden tables about Nora Ephron, dating, and toothbrushes while indulging in these incredible concoctions. I had a biscuit and sausage gravy sandwich while BK went the 'pig and fig' route, bacon and fig jam. Both were to die for, and I'd go back in a heartbeat. It's great, too, for late night munchies since they're open 24 hours! I mean, who doesn't want homemade, gourmet snacks at all hours of the night?

November 9
It was soiree city at The Blue Banana, my apartment. There were a bunch of people I didn't know and a bunch I did, and everyone had a fabulous time and drank champagne. My delightful roommate made me a funfetti cake topped with pink cherry frosting--"To Our Favorite Diva, Happy Birthday Elyssa." With 25 candles!

November 10
EH stayed over after my birthday and we went gallivanting around downtown. Our first stop was the Daily Candy Bazaar, and we managed to scoop up some free Jamberry nail wraps (they're like sheets of nail polish with different patterns on them)! Next stop was Vanessa's Dumplings--you have to go to the one on Broome and Eldridge, because that's where you can get 10 dumplings for $5. No, I'm not joking. We also got bubble tea and a sesame pancake, then sat on the steps of Eleanor Roosevelt Park on Houston and Chrystie to people-watch. We then strolled through Bond No. 9 fragrances to see if we could swing EH a new perfume. While we weren't exactly anticipating their $275 per bottle, we did score a sample for her, which was pretty sweet. Shortly after, EH left and I bopped around SoHo getting my shop on before meeting MDP for tea at McNally Jackson, my favorite bookstore. Later I went home, all warm and snuggly from the day, and reflected on the past week or so--a perfect start to my 25th year.
Posted by miss-manhattan at 1:24 PM No comments: