It's not every day I open my email to find an invitation to a lobster and tequila tasting event. 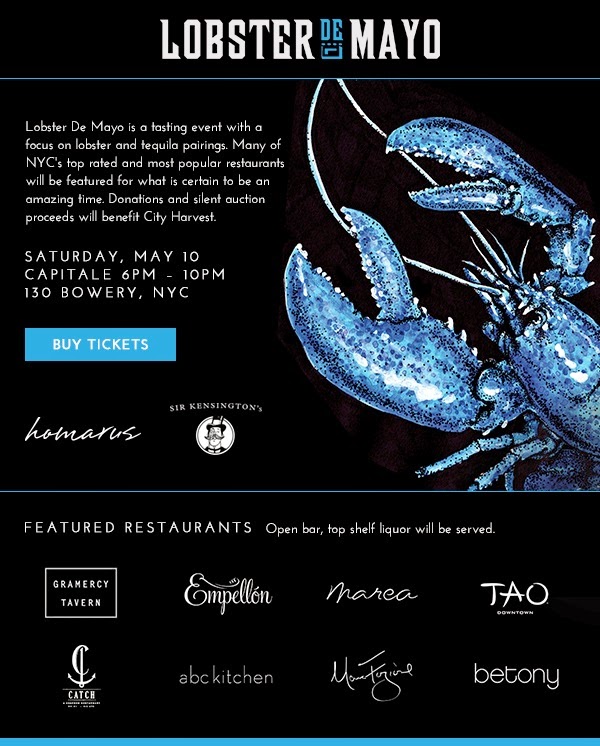 But about a week ago, there it was, a press release and ticket offering moi, Miss Manhattan, to attend the first ever Lobster de Mayo. Put on by New York City lobster wholesaler Homarus and hosted by The Food Network's Katie Lee, the event will be held on Saturday, May 10 at the elegant Capitale in the East Village and will feature chefs from divine restaurants like ABC Kitchen, Gramercy Tavern, Empellon, Jean Georges, and many more (you can purchase tickets to Lobster de Mayo here). Portions of proceeds will go to the charity City Harvest, which helps New Yorkers facing hunger.

I could hardly believe my eyes. As a child, I once made my mother a Mother's Day card saying I loved her more than lobster which she knew was quite a lot. And tequila and I have been great friends for many moons.

I said to SD, "How do you feel about lobster and tequila and enjoying them while wearing cocktail attire?"
"Do you even have to ask?" she said. My sentiments exactly.

Homarus, named for the genus of the American lobster (Homarus americanus), has a 24-hour Maine-to-restaurant delivery process that's revolutionizing the industry. Previously, there was 100+ year old tradition featuring a ton of checkpoints and multiple middle men, but Homarus is in full control of their operation: for example, the company's founders, Jordan Elkin and Brian McGovern, pick up the lobster themselves and deliver it to each restaurant.

The company's logo is the blue lobster, said to be a one in a million find. Or, as the company's website says, "too much awesome." I personally think it's "too much awesome" when people break off on their own and wind up making not only a successful company but changing their industry entirely. I can't wait to see what they have in store at Lobster de Mayo. And with that being said, I had the chance to talk to Jordan Elkin about the upcoming event. Learn more below!

Miss M: What inspired you to come up with the event?
Jordan Elkin: This year will be our five year anniversary of when we started our business and in those five years we just hit I think 300. We were thinking of doing something special including our restaurants and ultimately to include their guests, so we thought about doing a nice big lobster event. It's a whole Cinco de Mayo idea. I don't think anybody really does an event this time of year, right before the summer, so we thought it would be a nice event to get people excited about lobster but also for the summer.

When people arrive at the event, what can they expect? I walk in, I open the door...and then what?
They should expect some great music, some champagne, some tequila cocktails, some tequila shots, and there's gonna be two different lobster dishes prepared by each of the participating restaurants. They can be spicy, mild, hot, cold, there's so many different ways to prepare them so they should be excited for a lot of lobster and a lot of tequila.

I read that you worked in real estate and you worked at Shake Shack. What was the transition like from those jobs to a full-blown lobster wholesale business?
Me and my partner Brian had the idea to open a lobster roll concept and while we were developing that concept, I took some time off [real estate] to work at the Shake Shack. The transition from real estate to the Shake Shack was pretty different [laughs]. No more suit and tie, that's for sure. I don't think I could ever go back to a suit and tie. It's totally different work. It's using your hands and a lot of it is using your head.

I love the lighthearted nature of your website. Do you also translate that into your work, and do you plan on translating that into Lobster de Mayo?
We have some ideas that are still coming together, but the good news is we're relatively young, we're a wholesale seafood business, and a lot of the work we get because we genuinely get along with chefs. We understand their ties in the business. It's so high pressure working in a New York City restaurant that it's more convenient to be good and consistent with what we supply that they really appreciate it. That to us translates into a working relationship and then a friendship. Most of the people we deal with are my age, they're below thirty.

What have been some highlights and some challenges you all have faced when putting Lobster de Mayo together?
The highlights would be that the restaurants we work with want to participate and they go out of their way. The event is going to be taking up their free time, and they have so little of that so giving that to us is very important. It means a lot.

On the challenging side, it's the day before Mother's Day. I think there are going to be a lot of upset mothers with hungover kids for Mother's Day [laughs]. We knew the event was before Mother's Day but we didn't think about mothers being upset. So hopefully sons and daughters will invite their mothers  to the event and that's how we thought it would solve that problem. Everybody can be hungover together!

What made you decide to partner with City Harvest?
I see their trucks always on the road, which means they're busy. Most of my chefs that I work with are on the board and I work with them on other events. We reached out to them and they were very accessible. They replied right back, and then in less than a week we had an agreement. You can buy tickets to our event on their website, on our website. It's not only just a great cause, but a great partner to work with.