We had planned the day probably two months in advance.

"I'm dragging you with me to the new punk exhibition at the Queens Museum," I said to my friend AR. I had no particular timeline in mind, just that I wanted to go see "Hey! Ho! Let’s Go: Ramones and the Birth of Punk," which had opened on April 10.

"Fine," he said. "We're gonna go to a baseball game afterward." He asked me to pick a day from three consecutive ones in the middle of June--the day his hometown team, the Pittsburgh Pirates, were playing the Mets at citiField, a short walk from the museum--and then we would go. But the days were all in the middle of the week. We would miss work? He wasn't concerned.

"It is a beautiful day in Chicago. Temperatures in the upper 70's."

It wasn't exactly a beautiful day like the one bestowed on Ferris Bueller when he took his day off, but I was happy nonetheless to be playing hooky from work. Rain clouds loomed ominously above, but I wasn't worried--if it rained, it would rain. There was no canceling our day off! I simply shoved my umbrella in my bag and made my way to meet AR for lunch.

We started our day at 1:30 with Bloody Marys and Mexican-ish food and Depeche Mode playing in the background. Drinking in the middle of the day on a Thursday? I thought to myself. Who was I? Because normally with work I tend to be rather Cameron-like--if you try to mess with my work, I get "so tight that if you stuck a lump of coal up [her] ass, in two weeks you'd have a diamond."

But today I was happy to not feel stressed from leaving work: I had managed my time to a tee this week, waking up early and going to bed later to make sure I would get all of the work done I needed to, really earning that day off on Thursday. I would not be the Cameron to AR's Ferris today; perhaps I would be some version of Ferris on my own.

We made our way to the Queens Museum, getting stuck in a little rain on the way. Eventually it subsided but I'd learn later we'd need them again, next time for reasons a little different.

"Um, she's sick. My best friend's sister's boyfriend's brother's girlfriend heard from this guy who knows this kid who's going with the girl who saw Miss Manhattan pass out at 31 Flavors last night. I guess it's pretty serious."

The Queens Museum is located in Flushing Meadows-Corona Park in, of course, Queens. Flushing Meadows was home to both the 1939 and 1964 World's Fairs, so it is sprinkled with a wealth of sculptures, beautiful, tree-lined walkways, and occasionally some decay porn from once-used pavilions that have since been abandoned. It's also home to the Unisphere, the giant silver globe sculpture surrounded by a circle of fountain jets spraying water zillions of feet in the air, that you'd probably recognize from more than a few films taking place in New York. Over 897 acres, it's also home to the USTA Billie Jean King National Tennis Center, the New York Hall of Science, citiField where the Mets play, the Queens Theatre, and more.

Getting off the 7 train at Mets-Willets Point Station, we crossed over a quite unexpected
boardwalk--what is this, Brighton Beach?-- and into the park. One of my favorite things about this was that we never used our phones, just following park maps and the visual of the Queens Museum to get ourselves there. It's not an incredibly difficult park to navigate as there are lots of clear pathways, but it felt nice not to have my face jammed in my phone when I didn't need to. Shortly, after a long tree-lined path, we came upon the Unisphere and its necessary accompanying photo session. We had to skitter into the museum quickly after that because we'd have just an hour until the gallery closes.

"The place is like a museum. It's very beautiful and very cold, and you're not allowed to touch anything." 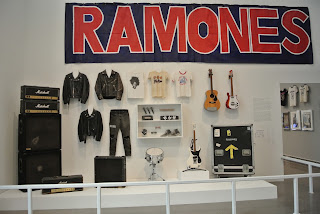 You might wonder what a Ramones exhibition is doing in the Queens Museum, but it really makes quite a lot of sense once you learn the Ramones were from the Forest Hills neighborhood in the borough. They (like my mother!) went to Forest Hills High School, they saw shows at Shea Stadium, and their parents owned businesses in the area. In the exhibition, their ticket stubs from local venues are on display, as are their gym shirts from high school, all of their album covers, some of their leather jackets and amps, infinite posters and photographs from CBGB, their world tours, and so much more. Sometimes you forget these were just "kids from the neighborhood" who my mother maybe even crossed paths with as she moved around Jewel Avenue as a teenager. 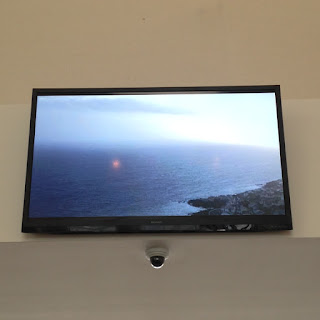 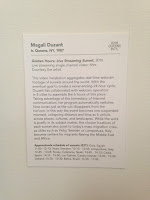 At the museum, we also had the pleasure of seeing my friend Magali Duzant's work on display as a part of the 2016 Queens International exhibition, which is a biannual exhibition of artists working in Queens. Magali's work is Golden Hours: Live Streaming Sunset, for which she set up webcams around the world to stream sunsets in real time. When we arrive, we are viewing Iceland, is blue waters turning white under the rays of the setting sun.

We dawdle in the gift shop until the museum closes and are ushered out the back way. This brings us closer to the decay porn I mentioned earlier, remnants from the 1964 World's Fair that just didn't have any use after it ended. I had the pleasure of being here before, while I was photographing for Nora Lum's Awkwafina's NYC, and still, somehow, it was just as entrancing. Who walked here before us, and what did they see? Probably not several 'Danger: High Voltage' signs that prompted me to sing Electric Six as we tried to find an entrance to the pavilion. There were several people inside, and we figured they must have gotten in somehow. But, it turns out, they were part of a tour and their guide wouldn't let us in with them. He was friendly, though, and mentioned the space would be open for viewing later in the year.

We find our way back to the Unisphere, where there's a Mister Softee truck waiting for us. A soft-serve vanilla cone rolled in rainbow sprinkles is another perfect antidote for a grey, humid day like today, not to mention practically a necessity if one is going to play hooky correctly. AR decides he would like to eat his cone inside the Unisphere fountain and promptly opens his umbrella and walks inside of it, doing some fancy footwork to avoid its massive puddles that could swallow one's feet whole, a quite unpleasant feeling to experience when there's so much walking left to do in the day. I know it's unpleasant because I did not master the footwork so well, and got my feet soaked coming and going. However, it was an awesome feeling to sit inside the fountain, dry except for my feet and a splash across my back from a rogue spray of water, and eat this ice cream cone while staring out at the splashing water. What I also loved about this moment, and the day overall, is that I was never a teenager who skipped class or did anything that might get me in trouble really, so to be actively doing things that teenage me should have done to better take advantage of life was incredibly rewarding.

We stroll around Flushing Meadows a bit more, mostly because we are in search of coffee. Instead, we find playground animal sculptures perfect for climbing and taking pictures on, as well as the New York Hall of Science and its corresponding Rocket Park Mini-Golf (which is, sadly, closed by the time we arrive). Then we walk through Corona and ultimately end up at citiField for the Mets game (read: Pittsburgh Pirates game).

You realize if we played by the rules right now we'd be in gym? 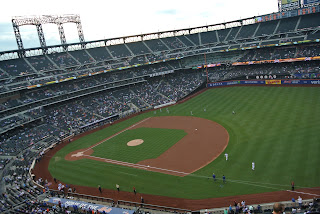 I remember when we find our seats that I haven't been to a baseball game in about 10 years, at the old Joe Robbie Stadium in South Florida for a Marlins game. The stadium was this old, circular cement structure that was basically one giant ramp going higher and higher. Citifield, however, is gorgeous: so clean and new, with everything from Nathan's Hot Dogs to Pat LaFrieda filet mignon sandwiches in the offering, vittle-wise. We found our seats and AR proceeded to explain baseball to me, giving me an old Pittsburgh Pirates hat to wear. Even though we were surrounded by Mets fans in royal blue, orange, and white, nobody gave us any agita which, AR tells me, is pretty typical of baseball fans especially when the teams playing aren't rivals. Good baseball is good baseball, after all, and even though I was supposed to be cheering for the Pirates I was happy to see really wonderful catches by the Mets when they were in the outfield. We chowed down on sausages and ultimately watched the Pirates lose, but it was great to be spending a summer evening in this sort of nostalgic fit of Americana and we walked away happy.

"But still, why should she get to do whatever she wants, whenever she wants? Why should everything work out for her? What makes her so goddamn special?"
The 7 train was running not just express but 'super express' back into Manhattan, and the journey took almost no time at all. AR and I parted ways at Court Square and high-fived, our Day Off a grand success. The only thing that could have made it better was a visit to SE for a delicious Old-Fashioned cocktail, so of course I found my way there. Sipping on sweet bourbon with bitters, an orange peel and a brandied cherry, it was also the figurative cherry to what is perhaps the ultimate Day Off.

Posted by miss-manhattan at 9:33 PM No comments: