It was about 1am on Thanksgiving, when the blinds moved in my mother's bedroom, at my parents' house in Florida. At first we thought nothing of it. We were watching Milk Money, that awesome movie where Melanie Griffith plays a hooker who ends up in the suburbs and falls in love with science teacher Ed Harris. But then it happened again. And it wasn't a "it was the wind"-kind of movement. It was the movement the blinds used to make when our dearly departed cat would walk through them. Something living was behind the blinds.

We didn't know what to do--what if it was something poisonous??--but eventually my mom, brave as she is, went and opened the blind, and I saw it. A slimy little brown frog, half the size of the palm of my hand, was clinging to one of the white blinds for dear life, its little frog toes spread out like one of those sticky hands you used to get for 25 cents in hard plastic bubbles from vending machines.

Growing up in South Florida, I had become accustomed, as we all do, to all manner of bugs, reptiles,  and other strange, tropical creatures, but I never, ever got used to frogs. They make my heart thump in fear the way no other animal does. Upon seeing the creature in the house, my mom and I both gasped, and I definitely screamed like a little girl. I had only visions of the story my mother once told me of one of these frogs that had sprayed poison out of its mouth and killed my aunt's dog some 40 years ago. I didn't know if it was one of these frogs, neither of us did, but we knew we didn't want to get close to it or touch it. As my mother opened the blind to get closer, the frog leapt onto the ground. I screamed again as it bounded through the air, probably more scared of us than we were of it. It made its way toward my mother's closet, and I immobilized by fear. "Shit," my mother said. "I really don't want your father to put on his shoes tomorrow morning and step in frog." She was far less scared than I was. But the frog had disappeared into the closet. "Put on the light!" I said to her. I sat up on the bed and we both looked at the closet, waiting for it to come out. When eventually the frog stepped into the closet's pool of light, it stayed for a moment and, reflexes barely able to catch up with my brain, I threw an old blanket in its general direction and miraculously the blanket landed right on top of it. "Good show, Lyss!" my mother said, only to follow it with, "But what do we do now?"

We stared down at the blanket. My mother sat down for a second to catch her breath. We didn't want to kill the thing, we just wanted it out of the house. How on earth did the damned thing get in here, anyway? The occasional gecko on the house's exterior we were used to, but they were always outside and totally harmless.

There was an extra square of carpet in the closet, close to the blanketed frog. "Why don't we make a, uh, sort of sandwich?" I suggested, moving the carpet square under the blanket. My mother did this, wrapping the whole thing in a towel and moving toward the door. She threw the whole thing on the ground outside and slowly the frog emerged and casually hopped away into the night, as if nothing ever happened.

Friday night is a different kind of wildlife encounter. J, Z and I are at Lagniappe, a bar of sorts in Miami. They have both since moved to the area from their previous homes closer to me, so I am seeing their lives down here for the first time, the creatures in their natural habitat, if you will. Lagniappe is their usual haunt--good for both dates and hangouts with friends, they tell me. It is not a regular bar, but in a good way--in front of the cash registers, there are both refrigerators (with white wines/bubbles) and wine racks (red wines), where you purchase a bottle and you're given glasses. Then, you go outside to the space's massive patio that's attired with patio furniture leftover from Hurricane Andrew and lit up with strings of those yellow lightbulb lights and you find a table. Barely any two chairs or tables are alike, and they're all sort of pushed together in different corners of the patio in a sort of perfect chaos. Even so, there are some tables you don't want, J tells me--of one that's empty but in a very high-traffic area, she tells me if you sit there you get everyone's butt rubbed against your head. Not really what either of us were looking for this evening. We find another in a corner that overlooks the entire patio. It's booming with people, all sitting and enjoying their wine and plates of meats and cheese. We observe, making shady comments about the people around us, often punctuated with exclamations like, "Gurrrrrrrrrl," and "Oh NO, bitch. Oh NO." It's just like old times.

At one point, tiny droplets begin falling from the sky. First they're small enough to ignore, a light sprinkling, but then the drops get heavier, louder. Everyone either stays put or gathers under the bar's large overhang, but nobody leaves because we all know it's South Florida, it will be over in five minutes. And surely enough, it is. We sit down, seats a little wet but nothing drastic, and resume our discussion.

Eventually we embark on our own meat and cheese platter. Just as with the wine, you pick out your meats and cheeses and pay for them, then the kitchen assembles them for you on a platter with sliced baguette, jam, and olives if you so desire. I chose black truffle pecorino, drunken goat, and brie alongside capicola and proscuitto, and they were soon given back to me, blooming gorgeously on a silver tray. I carried it off back to our table and we dug in. In between three or four bottles of wine we discuss the trials and tribulations of dating as a twenty-something in the Tinder/Grindr/texting era and gossip about people we went to high school with. So, yes, it's just like old times, but with more wine.

The day I am leaving Florida, the blinds overlooking the backyard are open. Standing there in the grass like a statue is a bright green iguana that's about two feet long. It has spiky fringe on the back of its head and dark scales around its long-clawed feet. It is positively prehistoric, and it's just hanging out in my backyard. Don't get a whole lot of that in the big city, I think to myself, recalling the pigeons and rats that make up New York's "wildlife." There was an iguana by the house one other time a few years ago, a lime green thing clinging to the screen on the exterior of the house, but it was skinny and small in comparison. This one now was definitely a small dinosaur. I snapped a bunch of pictures, shaking my head in disbelief. Only in South Florida. 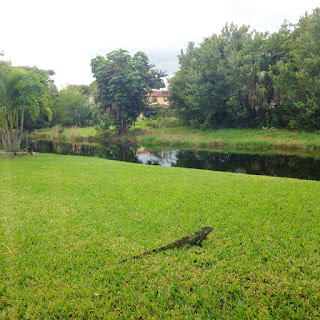 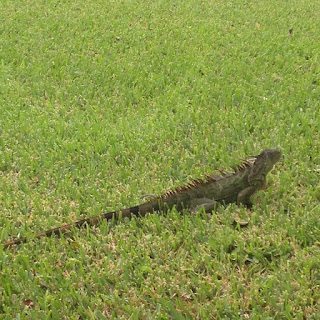 Posted by miss-manhattan at 12:07 PM No comments: