…the summer, I mean.
I know what summer means, typically. It means barbeques, suntan lotion, saltwater, chlorine, tan lines, not feeling bad about having ice cream in the middle of the afternoon, and candy-colored drinks with little umbrellas in them. Some of these things you get in New York, others not so much; and some things are an entirely different animal.
Coming from South Florida, I know heat—sweating after being outside for a full minute in places you forgot you had glands. But New York is different. At least in South Florida, you have to drive everywhere, and if you’re lucky your car has air conditioning. Not so in New York, where walking and public transit are the norms. Walking to the subway, there’s a soft but intense heat that swaths itself around you as if it was an overcautious school nurse wrapping a bandage around your leg just a little too tight—it’s not uncomfortable, per se, but  makes your limbs throb and it’s almost a challenge to feel your toes. As you descend the stairs underground, however, the bandage gets tighter and tighter and tighter…
Going underground is a little like being in a sauna against your will. Sweat begins to glisten on your face more and more with each minute you wait for the train. By minute five, sweat begins to form droplets on the upper lip and we all pray we are never the unlucky soul who waits more than 10 minutes for we will surely melt. It is, as KriTo would say, “some Wizard of Oz shit.” But when that train comes whizzing past, it brings a glorious rush of cool air that sweeps your hair up and the droplets away, saving the day each time. Inside the train, we lean voluntarily against cool metal poles that we would normally avoid like the plague for fear of actually catching plague. Summer means abandoning fear in pursuit of anything cold. The once calorie-conscious nursing student eats her frozen yogurt on the train with gusto. Teenagers recklessly sip Slurpee Big Gulps, for once not worried about looking cool. Even the financier on his way down to Wall Street chooses a pretty pink frappuccino to fight the heat.
Despite previous commentary, though, I don’t hate the heat. If anything, I find it a worthy adversary. I admire its wit and cunning. For example, when all year fashionistas pursue dewy, glowing skin with this potion and that cream, summer bestows it upon all of us for no charge and suddenly they prefer the matte look. I enjoy finding new ways to beat the heat, be it via my own frozen yogurt or eating a salad or even just letting it warm me up because, well, if you can’t lick ‘em, join ‘em. I like the way summer shines itself onto my nose and cheekbones because it makes me look alive, living in the moment. And summer makes walking in the rain almost enjoyable—it’s like the weather’s way of saying, ‘Oh, sorry for all that heat, bro. Let’s cool it off a little. My bad!’
Summer in New York is like a three month-long celebration. Everyone is outside all the time, playing on roofs and in parks. Some of this playtime includes rooftop and park movies. I had the pleasure of attending HBO’s Bryant Park Film Festival this past Monday. The festival shows classic films every Monday night all summer. I chose this night to attend the Bryant Park Film Festival for the first time because of Marilyn. Miss Monroe and I have always had a very important connection, though I cannot explain to you how it works or why it exists. When I saw Gentlemen Prefer Blondes was on the upcoming bill, I wrote it in my agenda weeks in advance and urged HL to come with me. Who wouldn’t love to sit in a park and watch a movie? I’m pretty sure this is one of the things that makes summer in New York. 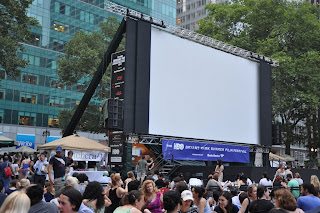 There’s a big, flat lawn in the middle of Bryant Park, surrounded by tables, chairs, and a walk-up café or three. They roll out the lawn in the spring because in the winter it’s an ice-skating rink. And when it’s a Monday night in summer, it’s absolutely packed to the gills with people, all facing a tall movie screen at the front of the park, on 6th Avenue. Since the movie started around 9, I thought if I arrived around 8 there would certainly be a patch of grass for me somewhere. 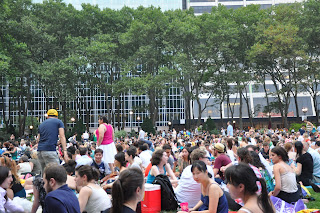 Barely true. I wedged myself between a series of lady groups who had spread their picnic blankets over larger areas, leaving just enough room for a small lady like I to heave my giant bag next to me and save room for HL, who was coming later. I unwrapped my salad and read my GQ, waiting for the movie to start. Next to me, girls chattered drunken mistakes, couples laughed, and every so often someone would stand up and wave at a friend just entering the park, guiding them towards their sitting place. Said friend would then gingerly make their way on tiptoe through the spaces on the lawn not covered up by someone else’s blankets or towels. It takes more skill, balance, and precision than one might think. 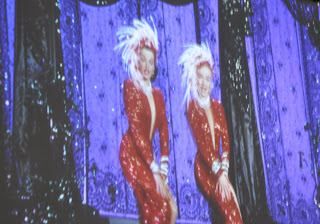 Eventually, though, you sit, and the movie begins. There are a couple of previews and a Bank of America commercial (they sponsor the festival), and then the HBO intro. It’s an old one, from the early ‘80s probably, and everyone gets up to dance and clap their way through it. Then the movie begins with a giant roar of applause from the audience. Then, in a flash, there are Marilyn Monroe and Jane Russell up on the screen in shimmering red sequin gowns and feather headdresses singing “We’re just two little girls from Little Rock…” The audience applauds at the end of each musical number, laughs in the proper places, oohs, aaahs, smiles and then the movie ends.
People filter out of the park in droves, down into the subway for more heat or walking for a bit to take in the refreshing night air they’ve been blessed with. That same summer dew nestles onto their faces as they enter their homes, opening the windows and letting the night air whisk in a breeze along with the sounds of dogs barking, taxis honking, and traffic rushing in the distance.
Posted by miss-manhattan at 12:22 AM No comments: