The World is My Oyster(s)

On Tuesday night, SJT and I find ourselves in the tunnels of Grand Central Station, below the walkways leading to the street, for a trip to an iconic New York landmark, perhaps as iconic as the building that houses it. The Grand Central Oyster Bar has been just below street level for over 100 years, its curved archways, countertops, and dark wooden bars delightfully from an era not our own. Though in 1974 it had become simply a rundown coffee shop, it was taken over that year by Jerome Brody, a restaurateur who transformed the space back to its former glory. It's now owned by an Employee Stock Ownership Program, and continues to be one of the city's most beloved spots--even if you'd never been there, you knew about it. You may even recognize it from previous years' cast introductions to Saturday Night Live, and it recently won the Design Icon James Beard Award.

And yet, SJT and I were among the group who knew about the legendary restaurant but had never gone. We resolved to remedy this with their new(ish) happy hour, which is held Monday-Wednesday from 4:30-7pm, and Saturdays from 1-5pm in their Lounge and Saloon spaces. The Lounge, with its modern white tables and chairs and banquette seating, gave us a view of the entire restaurant, so we waited patiently for one to open (they're first-come, first-serve). It felt vulture-like to prey upon the tables of people slowly putting on their jackets and leaving their empty wine glasses behind, but we knew it had to be done. He watched over one entrance and I the other and with a combined magic of occasional nods and eyebrow arches we wound up with a table vacated by four older, athleisure-clad women.

We sat, observing the three curved lunch counters to our left, with another one in the back, resolving to sit at one of them next time for the sandwiches that are only served there. I love sitting at lunch counters, with their spinning stools and handwritten menus overhead, for that feeling of being in another time.

From the happy hour menu, we chose Bluepoint Oysters and wine, a rose for SJT and a chardonnay for me. Normally, the Oyster List at the Oyster Bar is about five pages long, including not just the oyster name, but the geographic origin, size, and flavor profile. I have since learned that Bluepoints are regular sized, of mild flavor, and hail from New York's Long Island and Connecticut's Copps Island.

More older women in athleisure commandeered spaces around us, as did men in suits and women in neutral work attire. Grand Central Station is smack in the middle of midtown, of course, so it draws both tourists and businesspeople in great abundance. And yet here we were, two freelancers awaiting their giant plate of oysters.

I did not eat oysters until after I moved to New York, fearful from a young age of what might happen if one eats a bad one based on a story my mother had told me of her own experiences many moons ago. But after I ate one oyster and didn't die or end up in the hospital, I figured for a while I would continue trying them. I find them less fishy, less slimy than clams, with a meat that's just the right amount of slippery and chewy. I notice that I don't order them of my own volition (I wonder if this is a side effect of that original deep-seated fear), but if someone wants to eat oysters, I am happy to tag along. And since SJT has been on an oyster kick for the last few months, I have been happy to tag along. The Oyster Bar was his latest selection, and what would not be fun about testing out a New York icon?

I realized after coming back from L.A. that what most interested me about the city was what was left over from what I'm going to call its golden age, the '40s, '50s, and '60s. Restaurants like Musso & Frank with their famous steaks and Dal Rae with Cherries Jubilee prepared tableside are legendary spots I would have been excited to check out had there been time. But what about in my own city? There were so many incredible, historic places I had yet to visit and perhaps it was time to start digging in, to not take them for granted and try them while I was able.

It is a delight that the Oyster Bar was one of the first places I visited in this new view of the city I'm trying to have. Cracked open and laid on ice, the oysters arrived with tangy cocktail sauce, mignonette (a tangy, almost mauve sauce made of vinegar and shallots), lemons, and a big container of horseradish. We squeezed lemons and dipped sauces, but the oysters were perfectly lovely on their own, too--mild indeed, almost pillowy, and chilly. It was like being in another era for a while, so much that I imagined fixing my imaginary pillbox hat and rushing out to catch a train in my kitten heels. But alas, I was wearing cowboy boots which, I think, part of me still ultimately prefers.
Posted by miss-manhattan at 8:48 AM No comments:

I can listen to Magali Duzant talk all day. Animated and expressive, each story she tells colorfully unravels with gestures from her lithe arms and hands, arches of her eyebrows, and curling corners of her mouth. It’s wonderful to me that as such an accomplished multidisciplinary artist she’s able to maintain her deliciously quick and occasionally self-deprecating sense of humor.
Though she received her MFA in Photography and Related Media at Parsons The New School for Design, Magali is currently interested in “the transcendence of time and space, the act and faith of looking and searching, desire and longing.” She experiments with light, like with her Golden Hours: Live Streaming Sunset, a project featured in the Queens International which involved cameras set up in eight cities all over the world streaming footage of what would become a perpetually setting sun. She also recently completed a sculptural installation at the Brooklyn Infusion Center of Memorial Sloan Kettering Cancer Center called A Certain Angle / A Shape In The Sun, which involved a sculpture series reflecting and refracting light around the windows of the space. When I visit her at her studio, she is now working on an upcoming commission from Bike NYC that involves video and bike rides across the boroughs, a mural for BRIC Arts Media based on Walt Whitman’s poem “Crossing Brooklyn Ferry,” and an installation for FLUX Factory’s upcoming exhibition centered around language. Earlier this year she was invited to exhibit her work at Arts Suzhou in China and will be heading to Italy in August to study astronomy with monks in Italy. Not to mention she has exhibited all over New York and the far reaches of the globe, like the aforementioned China, as well as Russia, New Zealand, Denmark, and Australia. She is also currently an adjunct professor at the School of Visual Arts. I remain utterly in awe of her talent, intelligence, and hustle, but am also delighted that every so often she will also regale me with stories of Mets games gone awry and that we can watch "RuPaul’s Drag Race" together while eating baguette with cheese and drinking the ginger beer she brought to my house. Today in her studio we eat danishes and she makes coffee with a kettle she plugs into the wall and a French press. Her installation from Memorial Sloan Kettering is now hung on her wall and as light comes in through the south-facing window it casts an amalgam of rainbows across the space. She tells stories and I laugh and laugh. She tells me about her work and I listen and listen intently, fascinated. Magali recently discovered there is a park not too far from her studio, past graffiti and industrial spaces. We go for a quick constitutional, and there happens to be a small skate park amongst the greenery. My camera is aimed at Magali and she deadpans, “Ah yes, a portrait of the artist staring at shirtless skateboarders,” cracking a smile and then moving on.Follow Magali on Instagram and Twitter. 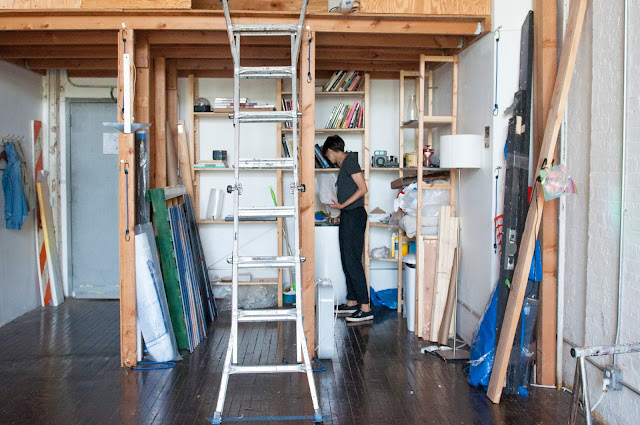 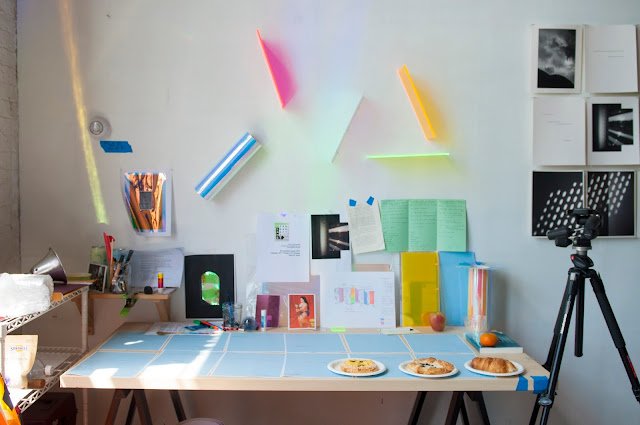 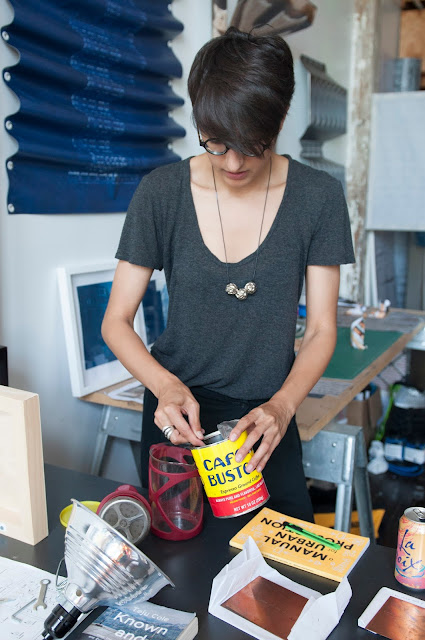 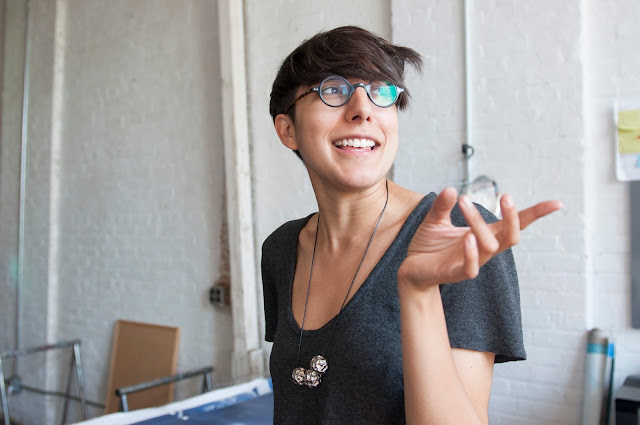 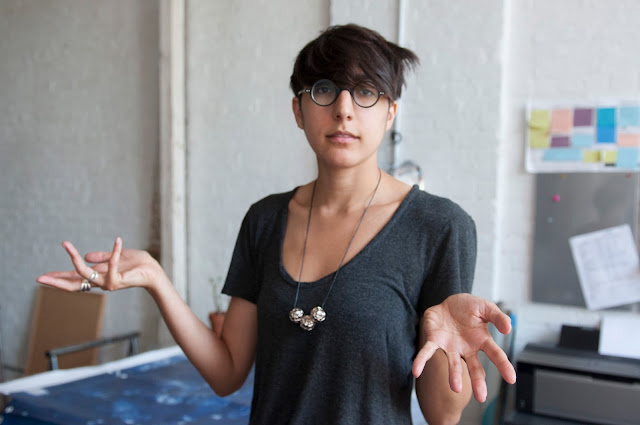 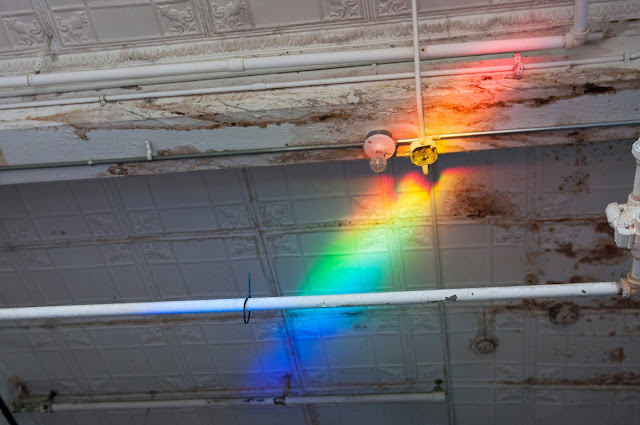 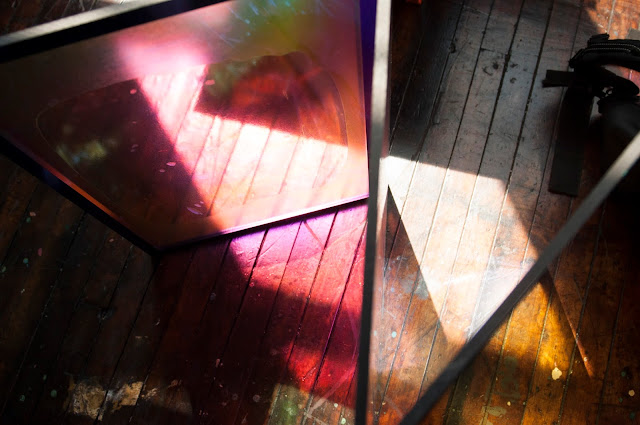 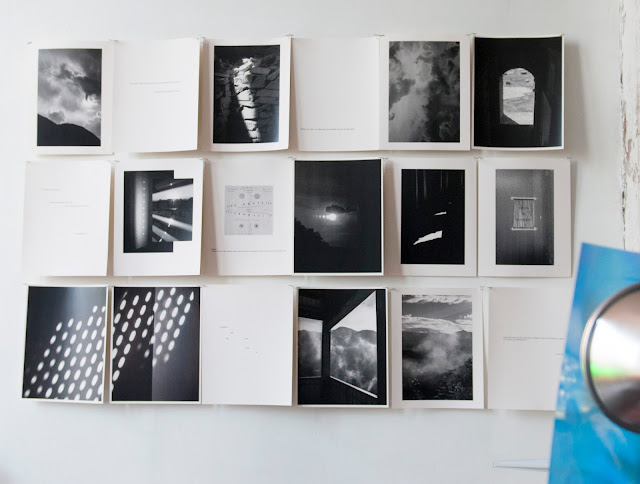 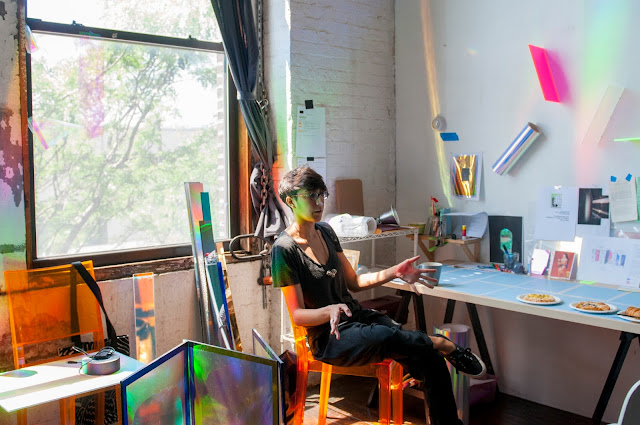 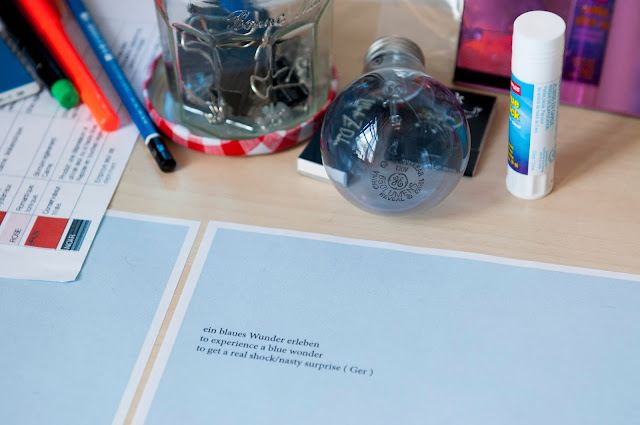 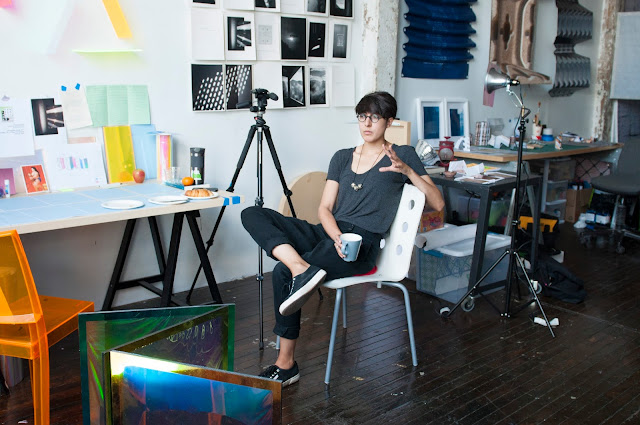 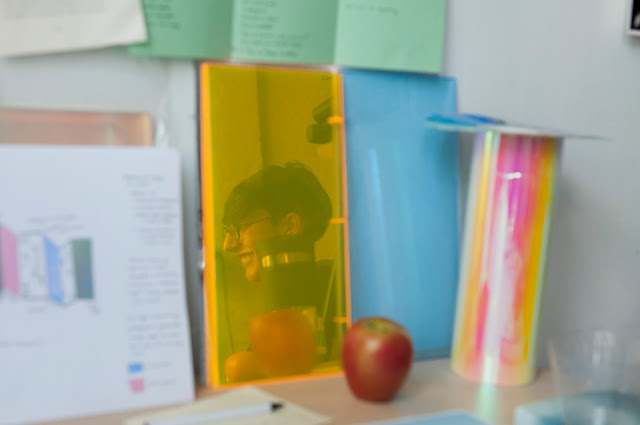 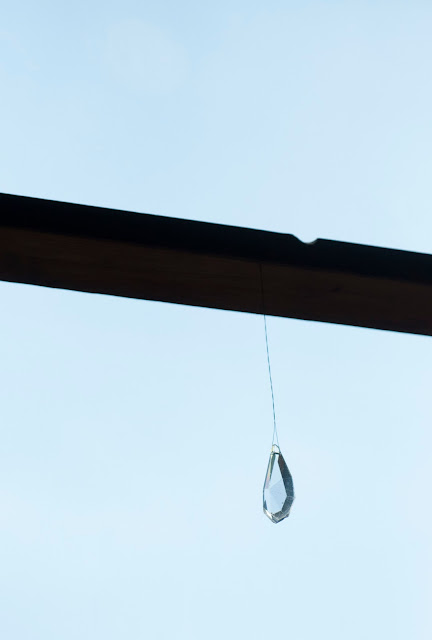 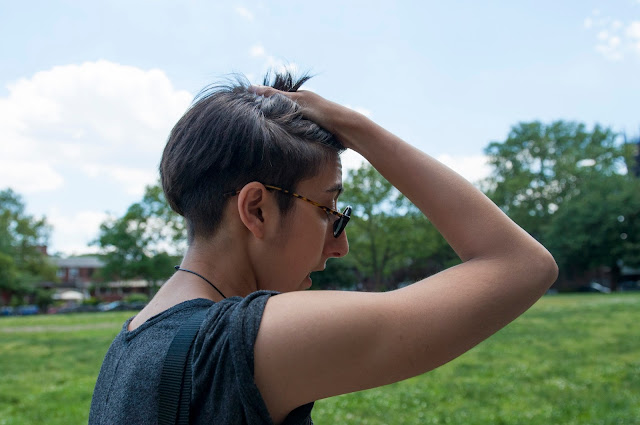 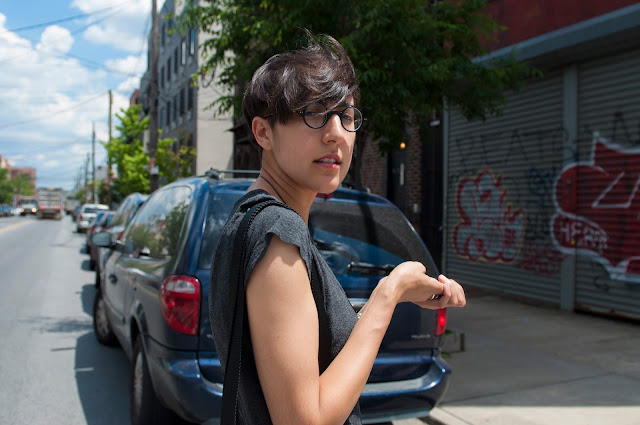 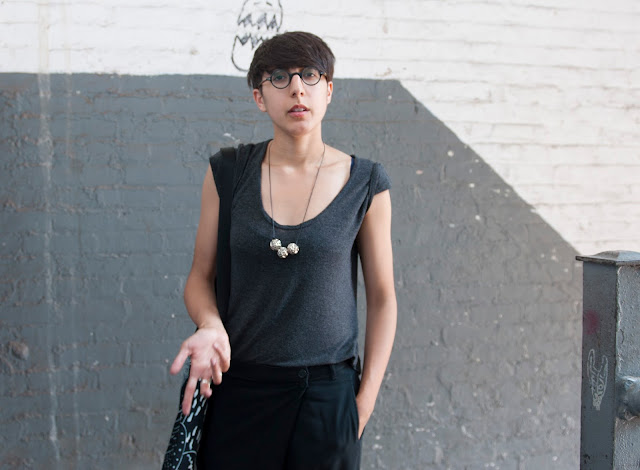 Posted by miss-manhattan at 3:07 PM No comments: