Email ThisBlogThis!Share to TwitterShare to FacebookShare to Pinterest
Labels: archive, Lenny An, Miss Manhattan Hangs Out

Despite New York being considered one of the hubs of great pizza in the U.S., I can’t say with any conviction that I’m…especially interested. Perhaps like most people in college, I tired of pizza my freshman year, when every welcome event featured the circular treats as a means of luring in new faces. I thereby can’t say with any certainty that I have a favorite slice of pizza in New York. I thought I once did, but I really hadn't had one that truly made me understand why pizza is so beloved, argued about, and dare I say fetishized across our nation.

On the day of the Mermaid Parade in Coney Island, however, all of that changed. My dear SE, who grew up close enough to that beach to walk there, had been telling me about a mythical pizza joint in the area for about a year and a half. It was his favorite not just growing up but has been consistently throughout his three decades. L & B Spumoni Gardens it was called, and according to him they had the world’s best pizza, a square, Sicilian slice that had no peer. The restaurant had been open since 1939, so they were obviously doing something right. Yet having heard many different answers to the “What’s your favorite New York pizza?” question in my nearly seven years here (and, at one point even having an answer of my own), and love him though I do, I took it with a grain of salt. It was, after all, possible for there to be several different kinds of amazing, world’s-best-quality pizza in myriad styles, each appealing in their own way. 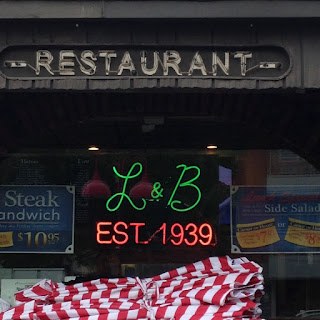 I truly had no expectations when SE, AG, and I walked from the beach to catch the B3 bus to Bensonhurst, hopping off just a block from L & B’s grouping of red tables outside of a brown brick building with two lines of people in front: one for those getting slices, and one for those getting pies. SE got what’s called a half tray, a pie of twelve slices (instead of a whole tray which, if my English-major-level math is correct, would of course be 24 slices) while AG and I staked out a table.

Soon the box arrived, and I almost didn’t know what I was looking at when I first saw it, this gorgeous fluffy bread positively swimming with deep red sauce and tiny flakes of Pecorino Romano cheese. At L & B, you see, what would normally be the pizza’s cheesy topping, the thing that differentiates the stuff from just being “sauce bread,” is underneath the sauce, baked into the bread. There were three edges of crust and one without so some slice had just no crust at all. Each slice was about the size of a CD case, a giant square I could only imagine holding with two hands—but alas, I am not a native New Yorker and have been told by several natives that one simply does not eat pizza with two hands; rather, one folds it in half. This just seems silly to me. Why sandwich something when you could enjoy more of it for longer by just holding it flat? But I digress. 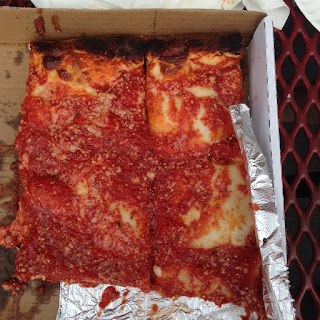 Was there a way I was supposed to eat this, a way a native New Yorker would know how to attack this particular pie that I, a mere transplant, would never know? I asked.

“Well,” SE said. “Do you like crust?”
“No,” I said. On the rare occasion that we would get pizza, I always left the hard bits for him to crunch on.
“Then don’t eat the crust,” he said.

So I went for the middle slices, the warm sauce almost spilling over the edges of the perfectly square, almost cake-like pizza. I picked it up and took a bite. And suddenly, I understood pizza. Not just this pizza, but all pizza. It was as if I was standing in a tornado of olive oil and tomatoes and mozzarella and herbs and dough, complex mathematical equations flying past me in circles while the secrets of the universe revealed themselves to me. This was it! This is what pizza was supposed to taste like! I didn’t understand for so long because nothing had compared. Nothing was as simultaneously crunchy on the bottom and fluffy, cheesy, gooey in the middle; no sauce was as sweet yet tart and savory. I had never eaten anything like this in my life, so it’s no wonder I never cared about pizza until now. I imagine there are some people who feel about all pizza the way I feel about this one from L & B, who rejoice in all sauce-dough-cheese combinations in one form or another. I found myself lapping up fallen bits of sauce, yelping in despair when I thought I had dropped a loose corner (it was safe), feeling a heaving sense of sadness when the half tray was gone as if I had lost a dear friend because I had to eat him. 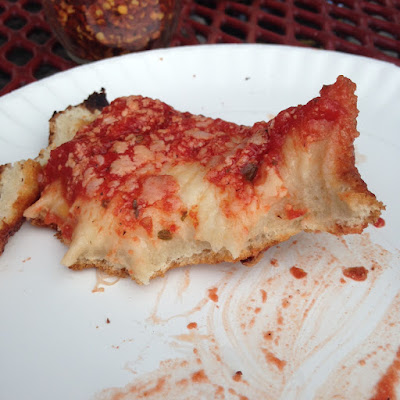 I even had a slight pang of jealousy—this was SE’s local pizza place growing up, the place that, if he wanted to order a pizza, would shortly deliver to his home close by. But with a distance over an hour from my house, such a delivery for me would never be. Even now, a few weeks later, I can still taste the cheesy, saucy slices. But it is still summer, after all, and many a slice can still be consumed close to the beach. But what will I do in the winter?
Posted by miss-manhattan at 9:55 AM No comments: