Fall on the Rocks: Zabar's and Central Park

Thankfully this is not a post about tripping on painful objects.

As I have said many a time, try as you might to find it, there is absolutely nothing that compares with fall in New York. There's a cool rush of breeze that runs through your hair and kisses your neck, on top of none too few days of sunshine if you're lucky. What I find interesting, though, is that I don't get to see the changing leaves nearly as often as I thought I would; that is, I'm not in an open green space on a regular enough basis. I did have the pleasure, recently, of walking past the beautiful McCarren Park in between Williamsburg and Greenpoint in Brooklyn, though. Walking along the western edge of the park felt like I was walking down a corridor paved with yellow leaves, upon which walked hipster parents in matching flannels and their unwittingly hipster children similarly adorned.

You would think, too, that living close(ish) to Central Park, I would have taken a gander there on my own in the past few weeks, but to no avail. This past Friday, however, MDP took it upon himself to show me what I was missing. Leaving his workplace at Columbus Circle, we went for a stroll up Broadway to the one and only Zabar's to get supplies for a picnic. It occurs to me now that I have never actually written about Zabar's, one of my favorite places in the entirety of New York, so I will briefly inform you of its magic now. Zabar's is a gourmet and kosher grocery store on the Upper West Side that has been in existence since 1934, an almost entirely family owned and operated business since then. They roast their own coffee, they have a stupendous prepared foods section, and hand slice their smoked fish. I will admit, my fascination with Zabar's began with a drawing by genius caricaturist Al Hirschfeld, pictured below.

The drawing is of the famous prepared foods counter, dotted with celebrities waiting for their numbers to be called, salamis hanging overhead. I wanted that quintessential New York experience, to buy my groceries where New York's literati and glitterati did. I don't know if the drawing was based on truth, or if he just inserted celebrity friends who lived in the area into the drawing (which he may well have done). But I wanted to go where the people were, not just to some chain that was easy to get to. Zabar's is priced extraordinarily reasonably for New York (and even not for New York), so it's easy to love. The store is always bustling with people, the food is fresh, and my bags are always brimming with goodies when I leave. As it was on the day when MDP and I left: salmon meatballs in an herbed cream sauce, Thai curry chicken salad, eggplant bruschetta, fruit compote and, of course, a famous bagel with Nova and cream cheese (which I have schlepped all the way to the Upper West Side for on multiple occasions). MDP had never been, and to my delight I found he enjoyed it as well.

Next, it was my turn to see something I had not previously explored. "I think the entrance is here," MDP said as we wound our way around the south end of Museum of Natural History and across Central Park West. Police barricades were already in appearance in preparation of Sunday's famous New York Marathon. But inside the park we went, following winding paths practically drowning in beautiful colored leaves--yellows, oranges, reds, and even the occasional misfit green--to a small beach of large rocks right next to a purple gazebo. The rocks overlooked a large lake surrounded by trees upon trees upon trees. A bright red one looked like it was on fire. Buildings seemed far away. The sun sank lower in the west and through candy colored clouds, fluffy tangerine, lavender and cotton candy streaming through the sky. High school kids blasted Top 40 radio, a man in a bowler hat and red suspenders took self portraits, two girls held a photoshoot near the water. 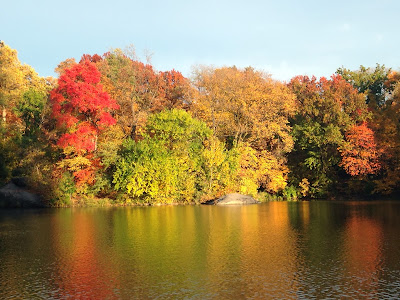 MDP and I sat near the water and dove into our trove of goodness, watching the sun set. As the sky grew darker, we left the park. In darkness, just before we got on the train, fireworks popped and burst through the sky in celebration of the upcoming marathon. Blues and reds and golds glittered through the sky, as if somehow planned just for us (and everyone else standing on the corner of 81st and Central Park West watching along with us). Somehow feeling warm in the chilly autumn air, we got on the train and headed downtown. I smiled. Every year, I fall in love with New York fall all over again. 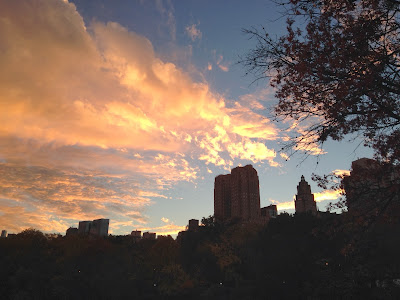 Posted by miss-manhattan at 11:50 PM No comments: