The only things I had heard about Coney Island raised it to mythical proportions, a seaside playland of colorful amusements, Nathan’s hot dogs, roller coasters, freak shows, burlesque, and much more. Upon my arrival last Thursday evening, I knew I would finally be able to sink my toes into some sand, which I had not been able to do since I left from my winter holiday in South Florida this past January. On the long D train ride south, my feet wiggled in excitement. The ever-game TBW met me there. 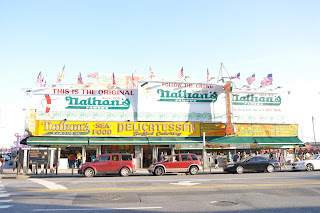 The first order of business TBW and I had was to gorge ourselves on junk food and be real Coney Island visitors, even for a short amount of time. When asking TBW where he wanted to eat, he simply replied “HOT DOGGSSS.” It was clear where we had to go. Our journey began under the flashing neon hot dog sign of Nathan’s, a renowned purveyor of hot dogs to Coney Island since 1916, with the rest of New York and even more parts of the U.S. following suit after that. Its big, green swirling letters represent a hot dog institution, really. An institution my father the hot dog maven had always made me especially aware of. In South Florida, we were lucky enough to have a few Nathan’s (Nathanses?) nearby, so I was introduced early on to the delights of crunchy, snappy salty sweet hot dogs kept like presents inside rectangular, golden yellow paper boxes. My mother also had a history with Nathan’s, telling me stories of driving all the way down from New York’s Catskill mountains with a group of friends for the sole purpose of eating a Nathan’s hot dog. Though I am by no means a junk food or fast food person, Nathan’s didn’t disappoint, and tasted just like it did when I was a kid sitting at the Broward Mall food court. With corn dogs, hot dogs, cheese fries and lemonades between us, I think Nathan’s is what Coney Island is supposed to taste like.
Post-Nathan’s, our travels took us to an area of grunge-tastic carnival games, with toothless women in their forties hocking impossible victories in the areas of riflery, horseshoes, and that thing where you try and get the ring around the swirling metal pole without touching it (though TBW did attempt the riflery challenge and was almost successful!). It was what all carnivals should be—bored teenagers running the Ferris wheel, men promising game wins to pretty underage girls, overstuffed and hopefully not flea-ridden stuffed animals that could double as lounge chairs suspended from all corners of the booths making you wonder, if you did win, where on earth you would put such a thing and how the hell to get it on the subway. I felt the remnants of a bygone era and wondered what Coney Island was like in its heyday, but was happy to appreciate it now in all of its wonderful, old-school, crusty, rusty twisted glory.
As we continued around the block, the world-famous Cyclone roller coaster appeared. Built in 1927, the track is 2,640 feet long and the whole ride takes about 1 minute and 50 seconds. Its steepest drop is 60 degrees, but it has a total of 12 drops, 16 changes of direction, and 6 180-degree turns. It was declared a New York City Landmark in 1988, and was placed on the National Register of Historic Places in 1991.
I had developed a taste for roller coasters as a middle schooler, when my mother told me never to ride the ones that went upside down. On a day trip to an amusement park, I went on four or more roller coasters that went upside down and had a blast. The feeling of one’s stomach rising into one’s throat on each downward plunge is almost addictive.
Though I didn’t know what kind of tricks the Cyclone was known for, I was curious about riding it—it had been years since I had a proper roller coaster ride, and there’s no time like a random Thursday night to cure that. I looked to see how much admission was--$8. Kind of a lot for a single roller coaster ride, no? But I decided it was worth it. How often do you get to ride a historic roller coaster, anyway? TBW indulged my childlike enthusiasm, and aboard we went. Squishing into hastily upholstered cars, TBW asked me, “So how old is this?”
“Old,” is all I could reply. I was a little nervous, but excited.
I would find out that the Cyclone was known for its plunges, steep dives where I felt that good old stomach-in-throat sensation. We rattled against the car as it clicked loudly on the wooden track, faces thrown back by the sheer force of movement. Don’t underestimate the power of wooden roller coasters! It was wonderful, though, and put a smile on my face that I could not unglue for about 20 minutes. 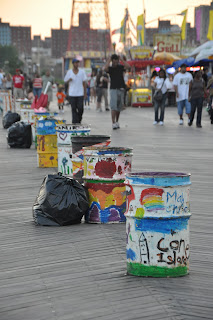 The boardwalk was next, surprisingly clean and lined with vendors selling funnel cakes, hamburgers, cotton candy, and other carnival food. An endless line of trash cans painted with different imagery of Coney Island by the eager paintbrushes of elementary school students created a kaleidoscope of painted metal down the center of the boardwalk. The sun set in front of us, making a milky pink, lavender, creamsicle and periwinkle sky. We stepped off the boardwalk and into the sand, littered with used Nathan’s napkins, beer cans, and red plastic Solo cups. It was a little sad to see a beach look this way, so I hope someone is responsible for cleaning it beyond the seemingly few who had been kind enough to clean up after themselves. Even so, it was lovely to feel the sand on my feet, to be at Coney Island feeling like an overgrown kid, smiling and pointing at all the bright colors. I imagine that’s what keeps people coming back. I’m sure the view doesn’t hurt, either. 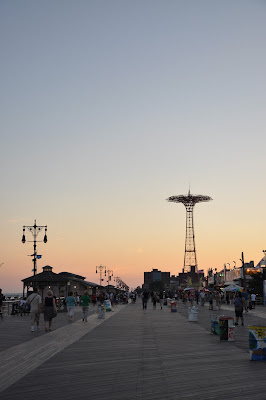