The “T” in Suzy T. Cat stands for “Trouble,” her mother Alissa tells me. Though Suzy’s father, Ian, has made the excellent point that it could, in fact, just stand for “The.”

Suzy lives in San Francisco and was adopted last June by her parents Alissa and Ian. She’s approximately two years old, an especially floofy orange tabby with perfectly lined, bright yellow-green eyes that would make makeup artists jealous. Despite all of her floof, however, Suzy is not much for cuddles. A few seconds’ embrace is all she will allow, and will begin to bat at your face (no claws) with a fluffy little paw should her clock run out.

Once upon a time, Alissa and Ian tell me, Suzy was a teen mom, having birthed a litter of kittens when she was possibly just six months old. They made a backstory for her, that she was living on the docks, a rough and tumble girl who’s now queen of the castle. Almost like Brandy of “Brandy (You’re a Fine Girl)” fame, the 1972 hit by Looking Glass but, you know, a cat.

Suzy is curious, full of “meeps” instead of “meows,” little gurgles in her throat that Alissa and Ian imagine ask questions like, who is this stranger and what is her bright pink rolling box? (Answers: me; my suitcase) What’s inside the small black box she holds in her human paws, and why does it she keep pointing it at me? (My camera, to take pictures of you, darling!) In the time I spend with Suzy, she bats not just my face but my camera and the fringe falling from the edges of my cutoffs.

Suzy’s home is littered with toys like a furry black mouse, a treat maze she gets to play with every morning, and a bobble toy that will give her treats if she knocks them out just the right way. Alissa has also taught Suzy to touch her nose against a target and to high-five, which she now does with expert precision. Yet with all of her curiosity, Suzy is mostly interested in the snacks that accompany such tasks. That, and naps. She lounges in her cat tree or on the table, all the effort she can muster placed into a single, teeth-baring yawn.

Sometimes Suzy gets “zoomy,” as Alissa says, darting around the apartment in bursts. This has happened on more than one occasion when she and Ian are out, leaving them to come home to something knocked over that hadn’t been before. Knowing full well this could happen at any time, they have resolved to leave the apartment saying “Okay Suzy, be neutral!” knowing full well that asking her to be good is just too much to ask. Perhaps accordingly, when I wake up that morning a pair of my underwear has mysteriously been removed from my suitcase, my water glass a little emptier than it had been, droplets flung about the coffee table. A fluffy orange culprit sits innocently nearby. 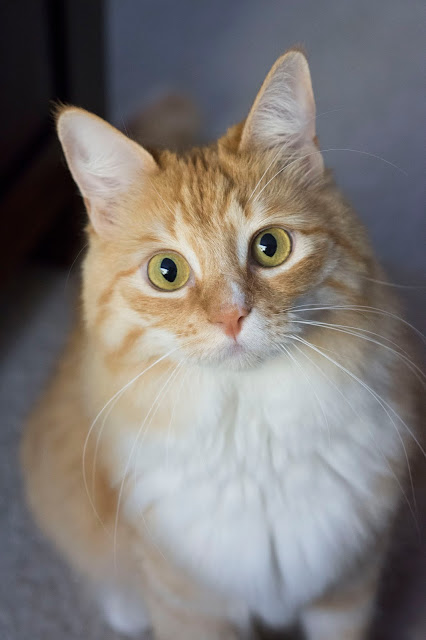 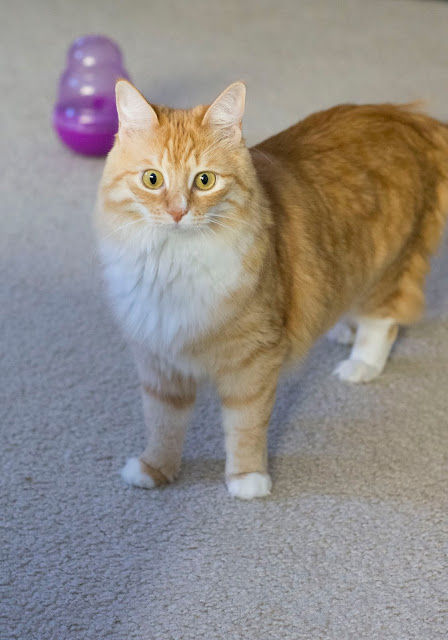 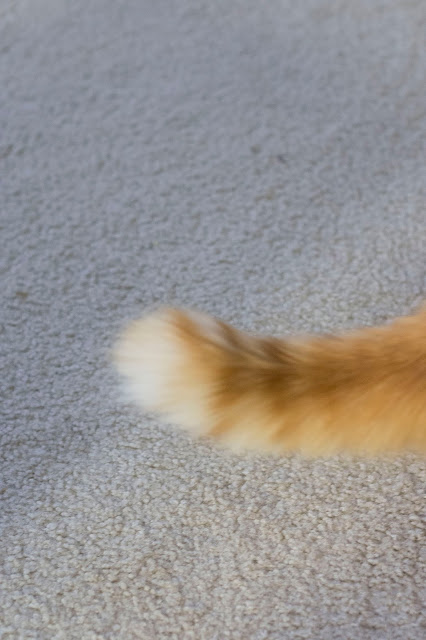 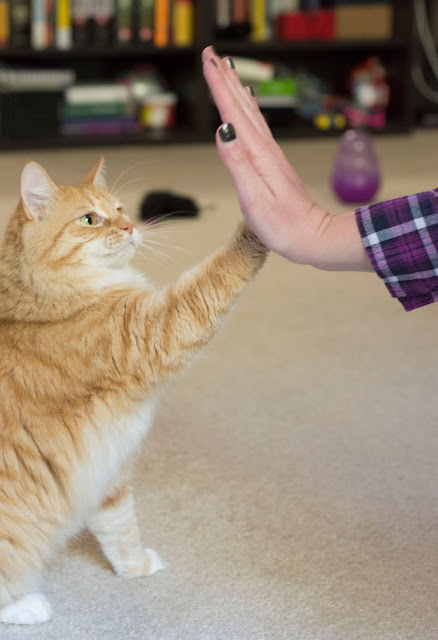 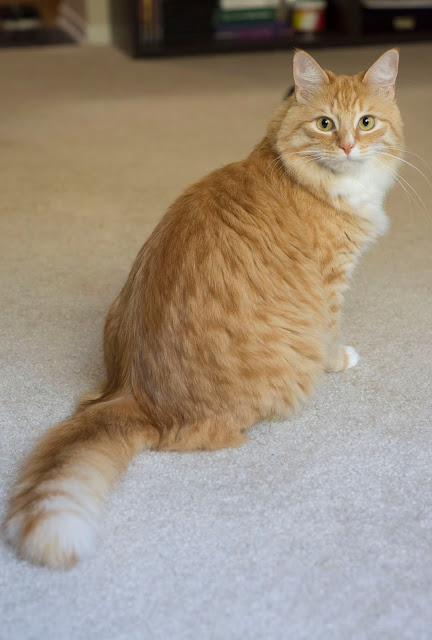 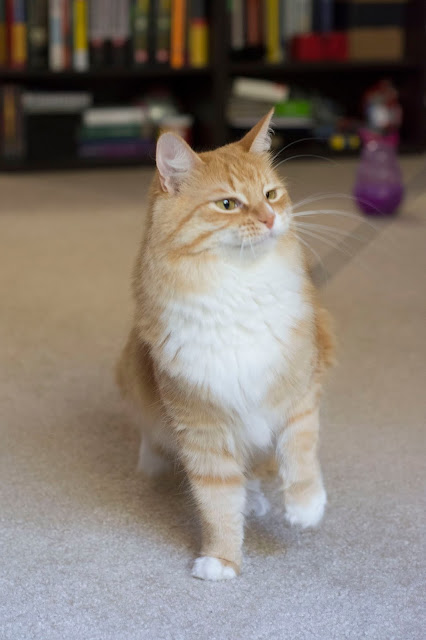 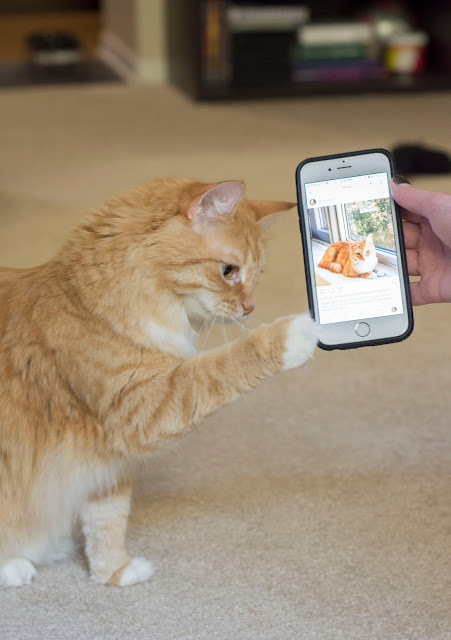 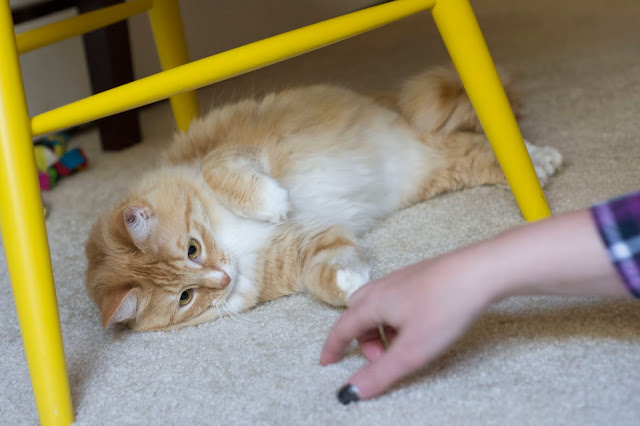 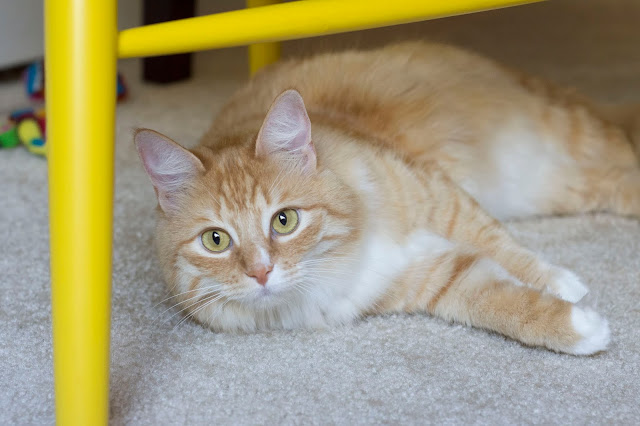 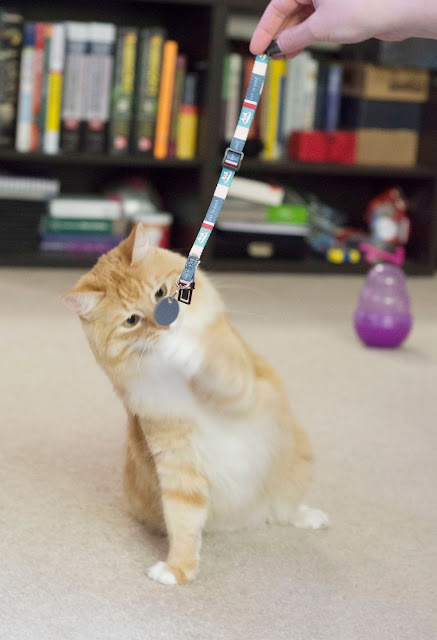 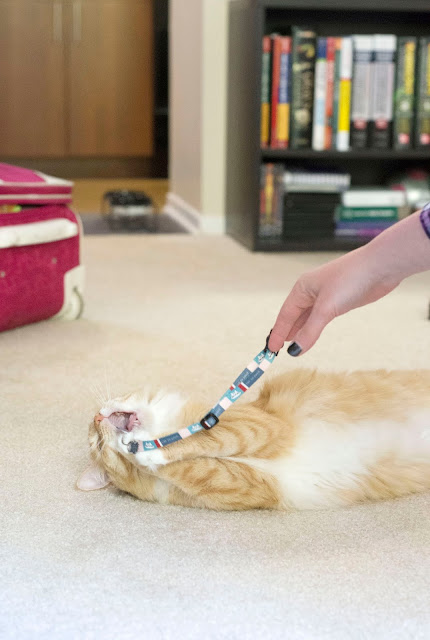 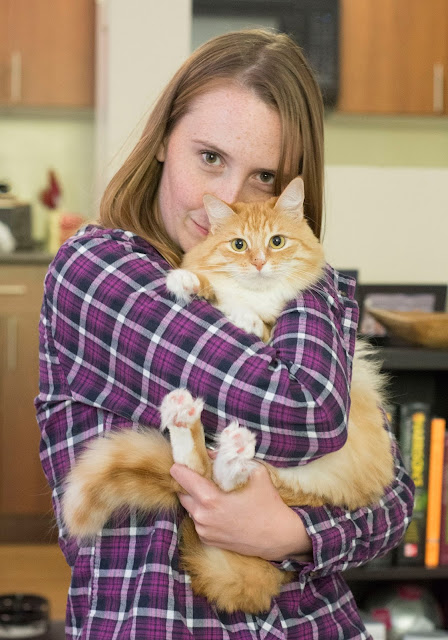 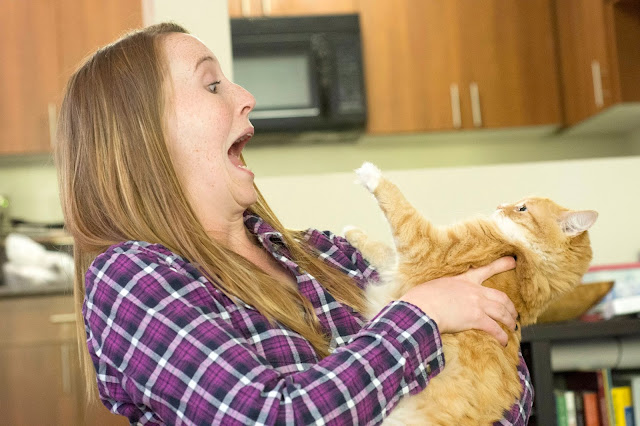 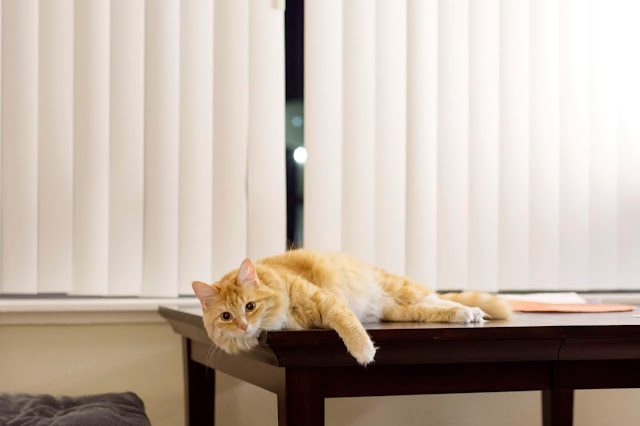 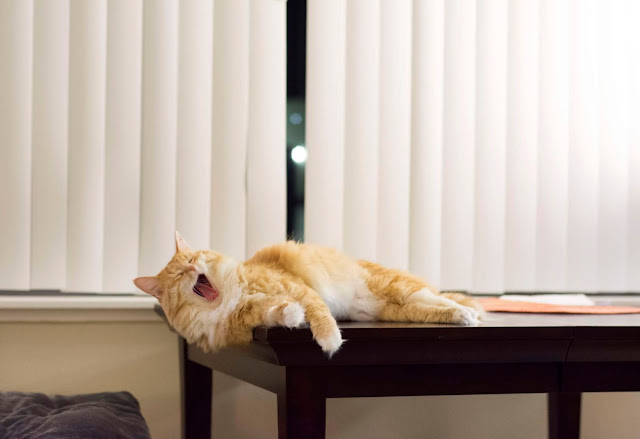 I did a marvelous thing recently. Rather, I did two marvelous things recently: I took two days off. Yes, I, freelancing workaholic robot woman of the Western Hemisphere, scheduled myself time to tell the rest of the world to fuck off. And, if I do say so myself, I did so to great effect.

I went out to San Francisco over Memorial Day weekend to photograph a wedding and stayed with AS for a few days. Tuesday she returned to work and I resolved to do nothing but sit in Golden Gate Park and read my new book: John Waters’s Role Models, purchased at the city’s beloved independent bookseller Green Apple Books. I didn’t know the last time I took a day off, and it started to take a toll on my work. I didn’t care about anything anymore and I felt like I was just going through the motions. I hoped even one day away from the computer would make me care again.

Waking up and answering a few emails (old habits die hard), I took myself out to an early lunch at Nopalito, the little sister restaurant to the impossible-to-get-into Nopa. Nopalito’s dinner rush is a similar experience, I was told, but I figured for a lunch right after they open the doors, it might be a little easier to get into. I was not wrong, and was immediately seated outside at one of their long green tables. The food, of the gourmet Mexican variety, was delicious but not filling--I spoiled myself by spending more than I normally would on two plates because, fuck it, it’s my day off and I’m (sort of, kind of) on vacation. The Mole Enchiladas are deliciously creamy, spiced but not spicy, and I practically lick the plate. The Calabacitas quesadilla is made of a hand-rolled blue corn tortilla with summer squash and jack cheese that gets interestingly chewy but not melty. Everything looks and tastes clean and fresh.

And then I walk to the park and read my book for hours and hours, sitting in the grass of two unused ball fields. The sun is bright and the sky is clear blue but there’s just enough of a chill in the air to keep my leopard cardigan on. I go back and forth to the park all day, eating up Waters’s words and then a coffee; more of his words and then an avocado sandwich from the local health food store. I almost want to go to the vegan restaurant in the neighborhood AS says is run by a cult, but I don’t feel like getting wrapped up in anyone’s dogma but my own today. As I sit and read of John Waters’s love for Rei Kawakubo and local Baltimore burlesque dancers, I wonder when the last time I sat and read a book anywhere that wasn’t the subway. I don’t know if I have an answer.

By the time I return to New York, my wherewithal to power ahead is significantly revived. The battery percentage that was once dwindling in the single digits has increased, enough that I know when I take my next day off in a few weeks, I may even be fully recharged.

Initially the plan was to go to Brighton Beach and sit in the sun reading all the copies of New York Magazine that had been piling up on my desk, begging to be read. I proceeded accordingly, but arrived on the beach in 68-degree weather to swirling, whipping winds that made what should have been a delightful temperature feel like something perhaps 20 degrees lower. I tried to brave it for a while--this was my day off! I wanted to go to the beach!--but I realized it was perhaps futile. I needed to go someplace that had some kind of enclosure around it, so I would be warm but not wind-slapped. Prospect Park was the next best thing, I resolved, and I boarded the Q train accordingly.

Cool enough for a hot coffee, I procured myself a cafe au lait at Hungry Ghost and walked to the park, through the faux Arc de Triomphe at Grand Army Plaza (it always tickles me to think about arriving in Paris last year and seeing the real one, joking to myself, “Hey, we got one of those in Brooklyn!”). I stop and pet a small floofy Pomeranian named Coco who doesn’t so much walk but toddle, and I stare at him much more than I should as I cross into the park. The sun is still shining brightly with a cool, this time refreshing, breeze as I set up camp in the middle of the park, encircled in a giant field by endless trees and green grass. There is something even more wonderful about taking a day off in New York when everyone else is working, knowing that you’ve carved out a space for yourself in this bustling city at a time when comparatively few others have. In a place that’s usually significantly more crowded, no less. I read issue after issue after issue of New York Magazine until I just can’t read anymore and start looking for places nearby to eat.

Puerto Viejo is a Dominican restaurant in Prospect Heights, and I sidle up to the restaurant and sit at what perhaps was once a student’s desk and has been transformed into a two-seated table. I order Pernil (roast pork) with yuca and maduros (sweet plantains). Complimentary banana chips with a delicious garlic dipping sauce arrive first and I make my way through them--I didn’t realize how hungry I was, but admittedly at one point I’m just using the chips as a vehicle for the creamy, savory, heavenly garlic sauce. But then my food arrives and dear sweet Jesus I have not had a meal that good in a very, very, very long time. The juiciest pork is utterly decadent, dripping with flavor. The yuca is boiled and soft, almost cake-like, topped with pickled onions that pop. And the maduros are practically caramel, melting soft in my mouth. I almost sit there agape for five minutes afterward. It’s lucky I live so far away otherwise I’d be there all the time and gain 9,000 pounds.

I leave Puerto Viejo in a perfect haze of sun-soaked warm skin and full tummy, trotting myself back to the subway, batteries recharged.
Posted by miss-manhattan at 8:27 PM 1 comment: