From February 9 to 16 is New York Fashion Week, and that means I’m running around in a swirl of models, dresses, makeup and god knows what else taking pictures and writing about what I see. And as strange as it may seem, I absolutely love the hours I spend on my feet snapping away for just the right shot, the crowds that show up at some of these events in impossibly high heels (men and women), and the nervous energy of designers hoping to make a good impression. The pressure is high—what editors, buyers, and whoever else sees at these runway shows and presentations affects what happens to the designers next. Sometimes designers have one bad collection after another and they fall off the planet, never to be heard from again.
I saw this play out on a much smaller scale at a show I went to last night. It was at a gallery in Chelsea, as so many shows are. To get to the presentation, one had to alight in the passenger elevator which really looked like the freight entrance just next to it.
“Who are you here with?”
A cleanly bald man in a blue velvet jacket with seafoam green pocket square looked at me inquiringly as I moved past him. “I’m with the PR company,” I said, as I made my way inside. What’s interesting is that even the smallest designers’ shows will have a very strict guest list, as if to say, no, not just anyone can come inside. But then you confidently say your name or what brings you there and move past the entrance without a pause and people let you go.
I was expecting a typical evening of shooting, models, clothes, socializing, etc., without any fireworks. People were swishing their wine glasses, staring at the models on display occasionally, chatting with the designers—it was really just a cocktail party overseen by models on raised white platforms.
One woman seemed a little out of place. She wore an acid-washed denim dress that went down to her shins worn over black leggings fringed with stones. The dress was belted with a magenta patent leather belt and on her feet were carnation pink heels encrusted with various kinds of stones. She walked around with one of those large, plastic-looking totebags given out by some grocery stores. There was no sense of irony in her look though, as is common with the somewhat questionable fashion choices people make today. “Can I take a picture of you for my blog?” she asked a young girl sporting patterned pants and a tan jacket.

More power to you, I thought to myself. It’s about time one of these industry events got a little shaken up, made a little uncomfortable. There was a brightness to her that seemed just a bit off—she was not one of these cold fashion girls who look you up and down before looking you in the eye. It’s sad that being a happy girl made her not fit in. I felt people looking at her and judging. I couldn’t watch it happen, so I just turned back to taking pictures, making my way through the room to do my job.
I continued on my way for a while, squeezing past the row of other photographers who had set themselves up in one location with their tripods and other accoutrements. About a half hour later, I heard a crash behind me. Trying to squeeze between a model on a platform and that same row of photographers, the woman in the denim dress had tripped and fallen, crashing to the floor with her wine glass still in her hand, the stones on her heels scattering. Someone helped her up quickly, I’m sure, but others gasped and stood around her, staring. What was scary is that I saw less concern in their eyes than a kind of twisted voyeurism, almost like they were laughing at her. I still couldn’t watch. 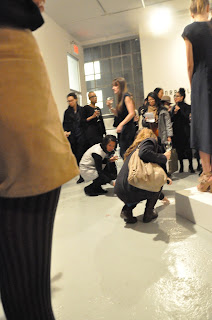 When she fell, her wine glass broke in her hand and spattered some blood on the floor. As soon as she was helped up and taken to the makeup room, people with the designer instantly rushed over to wipe up the blood. A circle of onlookers had formed around them, and as soon as the blood was gone, they filled up the space and continued socializing. It was like nothing had happened, that people just wanted to forget the incident as soon as it was over. It was almost startling. Time passed and more people filled the room.
For me, the situation held up a mirror to the industry. It highlighted those certain somethings that we all choose to ignore—the classism, the status battles, the creative frustration—and instead embrace only the things we like about it—the glamour, the artistry, the exclusivity. Not only that, but it showed me how quickly one fall can make someone—a designer, a model, a blogger at a party—disappear forever.
*
Eventually the women reemerged, her thumb wrapped up tight with makeshift bandages. The designer went up to the woman to make sure she was okay. The woman drank another glass of wine and continued with her evening.
Posted by miss-manhattan at 4:43 PM No comments: