“I like your trenchcoat, man,” said the kid with skin like flour and a sandy brown frohawk. The leather jacket draped on his shoulders said something in red and studs about anarchy and/or fighting the machine or some band which hopes to do both. He wore bright red plaid pants and giant, shiny leather Doc Martens. Plain, silver rimmed glasses rested on his face which was dotted here and there with the occasional brown beauty mark. He was talking to another young gentleman, a tall, gangly 20-something with a curly tuft of goatee.


“Yeah, some old burnout gave it to me,” he said, looking his own coat approvingly. It was too big, covered in grey swipes of what was probably street dirt. He wore it like a vest, bare chested with a magenta scarf tied around his waist like a belt. His clothes hung on him like a scarecrow as he perched against a railing and conversed with Frohawk.

“I really like it, though,” he continued. “But yeah, thanks man. I really appreciate it. What’s your name?” He stuck out his hand. “I’m Mr. Noodles.”


It’s the stuff like this you can’t make up.


Yesterday, I went down to Union Square. The park itself has an outer edge lined with black iron and brown wooden benches, all covered in people. Then the green space in the center of the park has a ton of little, bright green tables and chairs where people sit closely to each other and talk quietly about nothing at all. People also sit three-deep on the concrete steps closest to 14th Street and the subway stations, just looking out at the intersections and the traffic.


My primary reason for being there, though, was to photo graph the conglomerate of young and old hipsters and hustlers who bustle through it at all different times of the day and use the park in different ways. Some people happily munch on treats from Whole Foods, directly adjacent to the square. Others read in unison on park benches, talk on the phone, sketch, fall asleep, cuddle under trees. Chess players challenge passersby, graffiti artists give away the works they sprayed on city maps, vegan spiritualists hand out important rocks. Being there and seeing all of these different kinds of people is really just a cultural experience in and of itself.


Photographing people in Union Square is an interesting experience because so many people are there to people watch on their own, and documenting people-watchers is not incredibly interesting. But occasionally you end up with some brilliant subjects and you thank the photo gods for smiling on you. Here are some pictures from the day (I only wish they could be bigger on here). 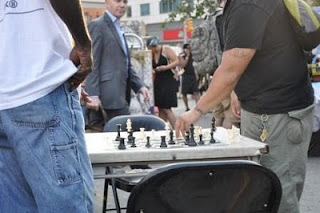 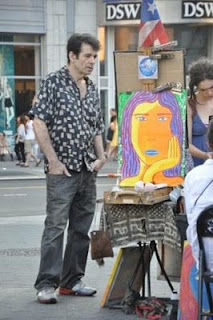 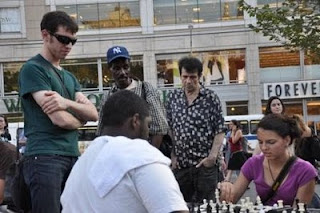 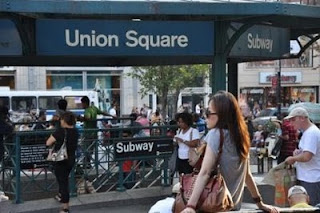 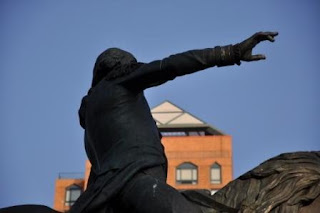 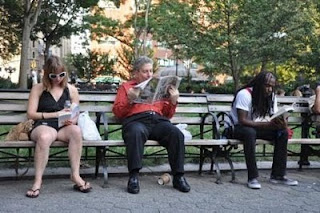 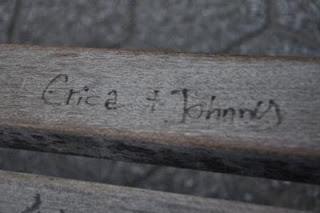 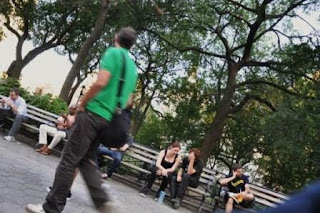 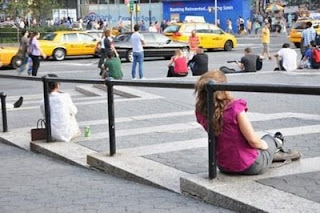 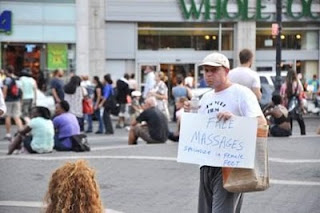 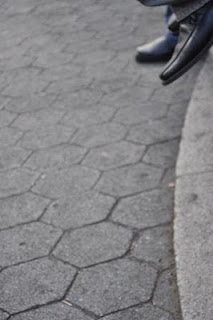 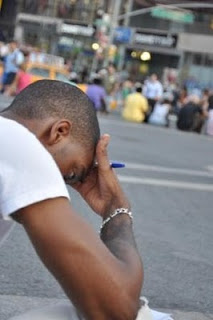 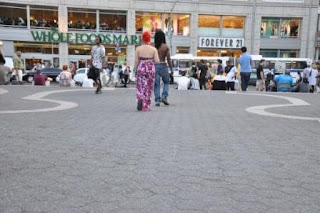 Posted by miss-manhattan at 12:14 AM No comments:

Today marks my official one month anniversary of moving to the little island of Manhattan, and if this month is any indication of what the rest of my time here is going to be like, I’m in for quite a ride. Somehow the ups and downs are magnified here because the entire city could really swallow you up if it wanted to (even though it never will). There are days when I’ve been practically dancing on the street, days where I have actually danced on the street, and days where, if it was not for my family-and-friend support system, I would have been inside the belly of the beast. Even on the not-so-great days, though, there’s something the city throws at me to make it all better.


Like how I was on the 6 train home last week after a rather awful evening and the New York Happiness Fairies blessed me with a fantastic transvestite, seated right next to where I was standing. She had shoulder-length brown hair and brown eyes, and was wearing the lightest shimmer of gold eyeshadow. A rumpled, old Louis Vuitton tote sat in her lap. I didn’t even know she was a man until she began talking in an inordinately deep voice about how trashy it is for bitches to wear fake Louis Vuitton bags. “I would rather have this old thing than something someone got on Canal Street, know what I’m saying?” she said to her companion. And in that moment, my life was so much better.


Aside from appreciating moments like these, I’ve been able to appreciate a bunch of things about New York since I’ve been here, things that are almost secrets you have to learn on your own, be they unwritten rules or more gifts from the Happiness Fairies:


1) Don’t talk on the phone on the bus or the subway.
There’s actually no rule against it, but you learn quickly not to do it unless you talk in very, very hushed tones. People will either listen to your conversation or stare lasers at you, trying to melt you with their eyes. Graphic, but true.

2) Your friends will come from all corners of the earth, and they’ll enhance your life in unimaginable ways.
The city is full of people from all different kinds of backgrounds, and they’re all thrown together in a giant pot of awesome. Don’t be scared, though. You’ll find the people you are supposed to find, or they will find you. And you’ll stick like glue because New York is a tough city and everyone understands that sometimes you just need a friend.

3) One of life’s great pleasures is taking a cab home after a crazy evening out.
This way, you can discuss the evening’s events (and by discuss I mean giggle and slur and say “Remember when….hahahahahaha”) while simultaneously being delivered to your front door, only to walk through it, go upstairs, and fall into your bed in a heap.

4) Sweet Caroline, our apartment, is the sex.
We’re madly in love with her and have no idea what we’d do without her. It’s so nice to come home to a home every day, with decorations and furniture. I highly recommend it to anyone and everyone, from the smallest apartment to the largest—it's the littlest details that make a house a home.

5) Going to a restaurant is perpetually a delight.
I’ve written about this before, but because going out for dinner can get costly, my roommate and I cook most of our own meals. When we do get to go out, though, it’s usually a great experience. How nice to not have to put my chopsticks in the dishwasher or scrub marinara sauce off a pot! It makes life in New York taste even better.

6) Central Park is green green green…but just enough.
One of my favorite views in the city is atop the rocks that overlook what I think is a skating rink in the winter. You can see the thick skyscrapers on Central Park West, and trees trees trees until you think you don’t want to see another one then miraculously you’re in midtown. For my roommate, who misses nature, it’s a godsend. For me, who appreciates nature but is freaked out by too much of it, it’s just the right amount. Everyone wins.

7) You can go anywhere any time you want (pretty much).
There is always something open, something to do, something to see, something anything. One day I went for a walk and wound up on the 6 train heading toward Astor Place for no particular reason other than the whim that struck to go to Greenwich Village. I wound up at The Strand bookstore that day and found The Washington Story by Adam Langer, which I had been seeking for months, and a photography book by Veronique Vial called Men Before 10a.m.

You can’t really do that in Pittsburgh without waiting nine years for a bus, and you have to drive to anywhere cool in South Florida. But in New York, the entire city is yours with the swipe of a MetroCard. It’s a beautiful thing.

8) There are other things, but those are for another time, for other months, for other anniversaries. A lady doesn’t reveal all of her secrets at once…
Posted by miss-manhattan at 9:46 PM No comments: