With each click of my shutter on the streets of Manhattan, I fall a little more in love. There is just something about a New York City sidewalk that has so much life that when you shoot a model walking down the street, it’s almost like a double portrait.
Mere minutes ago I finished my second fashion editorial for Her Campus.com, the national online college women’s magazine for which I am Style Editor. I had my models posing in my stairwell, on my fire escape, and ultimately outside in 40 degree weather where they put up with my zaniness in sleeveless dresses. What? They’ve had to do far worse on Top Model.
But when we were outside, the photographs had a certain vibrancy that I think was entirely due to the streets. Cars whizzing past, people shuffling in the crosswalk as I tried to shoot my models before the ‘Walk’ sign changed (pure hilarity—I’m glad my models were such good sports).
What really was the crowning moment was hailing a cab, telling the driver I would pay the fare if my models could pose with the car. He smiled and said “Yeah, sure.” That was all I needed. In an instant I posed the girls in front of the cab, on the hood of the car, inside it. And the driver ended up charging me nothing at all, just saying “Forget it,” with a smile and he drove off. We may have made his night!
When I was shooting outside, I understood the reason why so many movies have been shot here, so many books take place here, so much art is produced here in general. There’s something about the speed of the city, the grime, the flashing lights and the noise that inspires. I can’t say what it is for sure, but I know there’s an extra electricity pulsing in my veins that I haven’t felt in any other location.
I love how lights on cabs look in photographs as they rush past, solid beams of colored light implying movement. I love how the sky is the clearest, most solid color—like a white wall painted blue—on really beautiful days, and how that sky somehow brightens even the tallest skyscrapers or the lowest subway entrances. There is beauty, sometimes unconventional, everywhere. This city is not passive—it’s a living, breathing being. It has a heart and a soul, and on nights like tonight I can really feel it.
I hope to be in the category one day of famous artists who have used the city as their canvas, but for now I am content to have New York as my muse.
Posted by miss-manhattan at 8:56 PM 1 comment:

On Thursday, February 10th, something incredible happened. I walked through the brisk, late winter air swirling around Lincoln Center, past Avery Fisher Hall, past the famous fountain, past the Metropolitan Opera, past the security guards dressed in black and directly into the Mercedes-Benz Fashion Week tent. I was invited, after all. 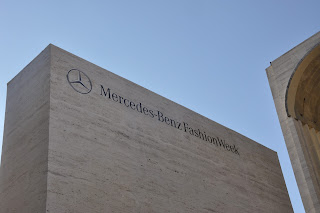 As I mentioned previously, I was hired by New York street style blog Style Defined to snap some oh-so-fabulous looks during Fashion Week, write some runway reviews, and tweet about various fashion week happenings. Being in the tent all day was my job. I had to occasionally repeat those words to myself because sometimes I would be in a state of disbelief. I hoped the sound of my voice wouldn’t suddenly jar me awake from a far-too-real dream.

Sure, it’s easy to sneak into the tents if you really want to—just look fierce, throw on your sunglasses, name a designer and walk past the guards like you own the place while yelling into your cell phone. But it’s the invitation, the spot you have waiting for you at a specific show that really matters. Because you’re not just inside the tent—you’re an insider.
With my camera hanging around my neck, notebook and pen poised and ready to take down names of the superior street stylish, I would be in the tent for hours talking to people from all over the fashion industry—bloggers, editors, writers, stylists, models, you name it. “Excuse me, hi, I’m with Style Defined and I really love your look. May I take a picture of you?” Snaps from the camera, followed by Style Defined business cards, a friendly smile and handshake, and I was off to the next stylish person. While working in the tent and at off-site shows and parties, I even managed to snag designer Richie Rich and well-known blogger Susie Bubble.
If I was feeling peckish, a quick, free, low-calorie bottled Frappuccino from the Starbucks counter set up in the tent soothed my hunger. Other than that, I lived on mini Fiji water bottles and skinny cans of Diet Pepsi. Both had booths in the tent, along with Maybelline (free lipstick), Kim Crawford (free wine), DHL (free…something. I still don’t know what they were giving out), Essie (free manicures), and others in and out throughout the week. Caffeine happily chugged away in my veins, but for the most part I was electric with pure adrenaline.
When it was time to tweet or write, I found a spot in AOL’s media box in the center of the tent, a space which could hold I think 30 equally caffeinated photo editors, bloggers, writers, and so on at one time. The spots filled up quickly and I had to move fast to nab a spot, but fortunately it never came to blows.
And when I wasn’t in the tent doing street style or social media, I was seeing shows. The first one I saw was Christian Siriano. What always amazes me about Siriano is the maturity in his designs, even though he just turned 25. Many of the designs this time around were genuinely classics, though on-trend for the upcoming season--wide-leg pants, little black dresses, high-glam ballgowns. For the first part of the collection, Siriano used a lot of black, but made it interesting with a variety of textures. Then came a forest/olive green and a pinkish mauve. The designs were smart, wearable, and high-fashion which I think we can always have more of.
The other shows I liked in the tents were Mik Cire, whose leather jackets, though menswear, made me swoon with delight; Carlos Miele, who made hot pink palazzo pants for fall; Toni Francesc, whose silver and gold jumpsuits gave me delusions of grandeur; and Anna Sui, whose smart pattern-fur-coat combinations always give sassy rock and roll vibes. The Alice + Olivia presentation at The Plaza was also delightful, with beautiful 1920s-meets-1970s sparkles on the models and Veuve Cliquot champagne for guests.

If I wasn’t in the tents, I was at shows in galleries all over Chelsea. Especially fantastic were the Jeremy Laing, Kimberly Ovitz and Juan Carlos Obando presentations. Jeremy Laing’s pieces were inspired by celestial bodies, with the surface of the moon and even eclipses making appearances in his collection. Kimberly Ovitz smartly blended minimalist design with neutrals and wild colors like grey with neon yellow, and royal blue with black. Juan Carlos Obando upped the glam factor with floaty, almost Grecian evening gowns and fierce suits.
﻿ ﻿﻿ ﻿
﻿
﻿﻿
﻿﻿
﻿

﻿﻿﻿ ﻿﻿ ﻿ ﻿ ﻿﻿
﻿Every day my schedule was different, and I was hopping back and forth usually between Chelsea galleries and the tents. Some days were longer than others, like those punctuated at the end by the oh-so-important afterparties. I wound up attending four, two at the posh Empire Rooftop (which, I’m told by my roommate, is another place often featured on Gossip Girl), one at Griffin in the Meatpacking District, and another at the Tribeca Grand Hotel. I met amazing and interesting people everywhere I went, from drag queens to photographers, young social media hotshots to face jewelry designers and everyone in between.

It made me feel alive to have something to do every second—down time was only reserved for my post-midnight arrival at my apartment, when I would then sit down and work some more on selecting photos and typing up my notes for the day. It sounds like a lot, but it was absolutely the best feeling I could possibly ask for. I was flying, still in disbelief that yes, this was my job, the very thing I came to New York to do.

There’s always a disconnect when you realize you’re finally living your dream. For so many years, the only thing I wanted was to go to the shows at Fashion Week, to cover them and write about them and take pictures. Then, because of some crazy twist of fate and Style Defined, there I was, doing it. Here’s to the next Fashion Week! May it be as incredible as the last.
﻿
Posted by miss-manhattan at 8:40 PM No comments: