Saturday, July 19
HanRo is getting married today! I have visions of her leaping from her bedroom like Monica on Friends wearing pajamas and a wedding veil, shouting "I'm getting married today!!" as she trips on her pant leg and falls to the floor in a moment of comedic perfection with no bruising. Or maybe that's just what I'll be like someday! Either way, it's an exciting day. Partly because it starts with Pamela's.

For the uninformed, Pamela's is a breakfast joint in Pittsburgh that makes easily some of the best pancakes--nay, hotcakes, as the restaurant calls them--this side of the...who am I kidding, some of the best pancakes ever. Loaded with butter, the spongy, thin cakes are crepe-like, with softly crispy edges that are somehow simultaneously sweet and salty. Standing in line as we wait for our table (because that is something else you will also do when you go to Pamela's, but fear not, time will go quickly and it will be worth it. Even Obama agrees...that's actually him in the restaurant, next to the Mrs.), I realize it has been over four years since I last had Pamela's, as my two trips back to Pittsburgh after graduating had not involved a visit, nor, I think, did my senior year of college, strangely. This location is new, decorated with endless accolades and publications and family photos of the owners and their staff, but here we are and we dive in and it's perfect, exactly as I remembered it however many years ago. It's nice when some things don't change. 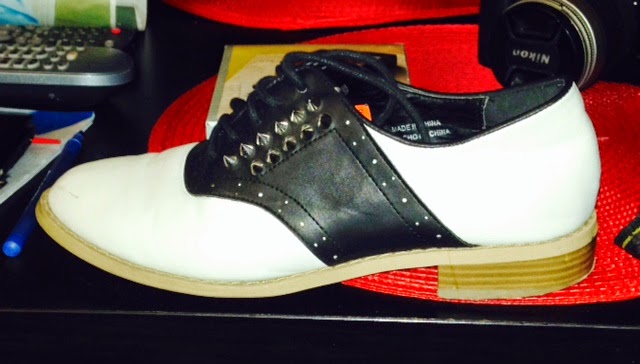 After breakfast is another trip to Avalon. Everyone is able to find something rad, including moi: a pair of saddle shoes with silver spikes around the laces. Finally a pair of shoes to wear to Fashion Week in the winter! Praise be to Our Lordess and Savior RuPaul.

Then a brief stop in Shadyside, on Walnut Street, where there is a main drag of sweet little shops, but also an American Apparel and a Sephora. There's also very funky and awesome Kards Unlimited, always one of my favorite haunts in Shadyside. It has a fun, informed selection of books, some of which are labeled 'Books About Families More Messed Up Than Yours' and 'Books You'll Like If You Are A Serial Killer', alongside stuffed cartoon body parts, fake mustaches, hand-printed greeting cards, and handmade jewelry. Once we finish there, it is time for a disco nap because all the carbs from breakfast have caught up with us and we are old.

After a disco nap and a dolling up session, we are off to the wedding at Phipps Conservatory, a botanical garden. There are trees and flowers all around us, and there's even a waterfall! The ceremony is beautiful. HanRo looks stunning in an ivory gown, bright white flowers in her hands. I get the feels when she and her husband look into each other's eyes and repeat their vows. Afterward, we sip cocktails amongst the greenery. There are passed appetizers, including a famous Pittsburgh staple, a potato pierogi topped with a caramelized onion. Proceeding to the ballroom, we find that each of us have been given a special HanRo and JH coloring book (and crayons!), chock full of Pittsburgh history and word searches, as well as a pickle pin to don (long before Pittsburgh was known for its ketchup, it was known for its pickles!). They also have a cookie table, another 'burgh staple. Tradition! 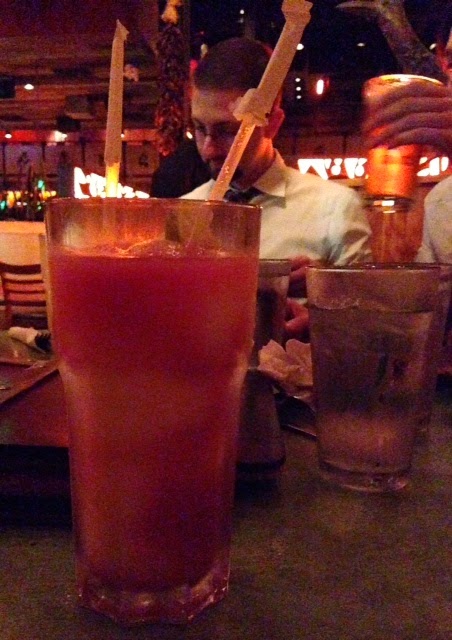 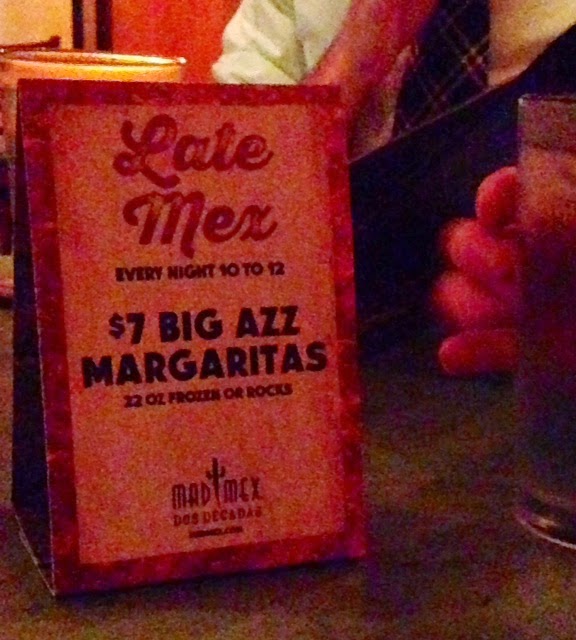 Post-wedding, some of us wedding guesty folk head to another Pittsburgh staple, at least if you were ever a college student, anyway: Mad Mex, home of the 22oz. Big Azz Margarita. AM and I share one of these lovelies which, by some stroke of genius and Pittsburgh magic, is only $7 between the hours of 10pm and 12am. Mad Mex is near and dear to my heart--it is the place I went for my 21st birthday, had lots of margaritas and then drunk-dialed my mother. We nosh on Mexi-goodies and eventually shut down the bar. 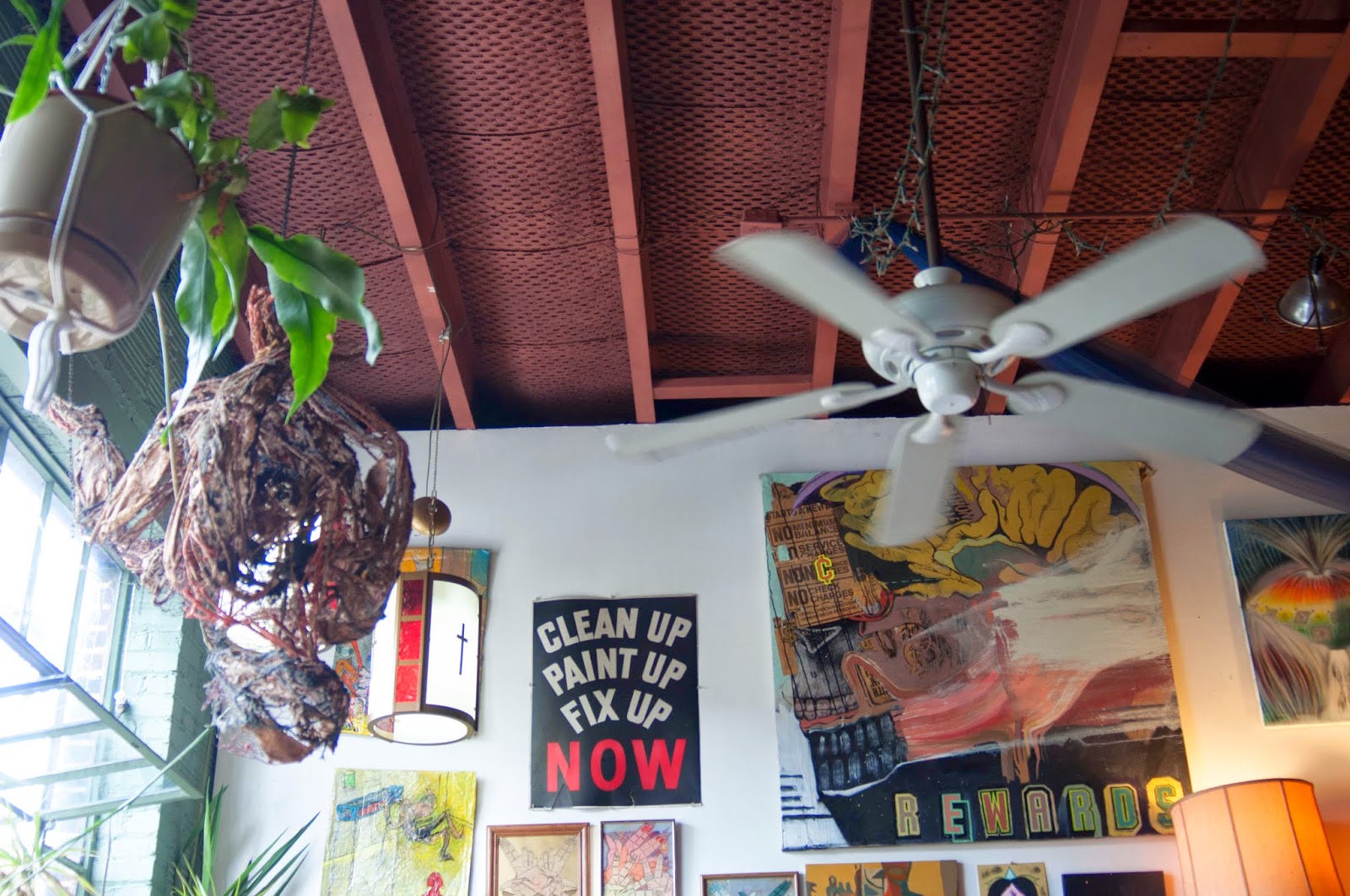 TS has set up a brunch for Pittsburgh folk and wedding guests at Zenith, on Pittsburgh's South Side. Though it hurt to wake up early, it was important to get there right when they opened (!) because we had such a large party. Also, it completed my superfecta of neighborhood visits -- Oakland, Shadyside, Squirrel Hill, and now the South Side. I had heard TS talk about Zenith many times before, especially something he called 'peanutty noodles,' but I had never been. Now having gone there, it is mind-boggling to me that I had never been before this trip. Zenith defines itself as a "Vegetarian Cafe-Art Gallery-Antique Goldmine" and it is so my thing I can't even believe how much my thing it is. Walking in, you're immediately surrounded by vintage oddities and curios, clothing, books, and god knows what else. Lamps stuffed with old Barbie dolls, mannequins wearing welding gear, antique liniment bottles and glass containers full of old Christmas lights. 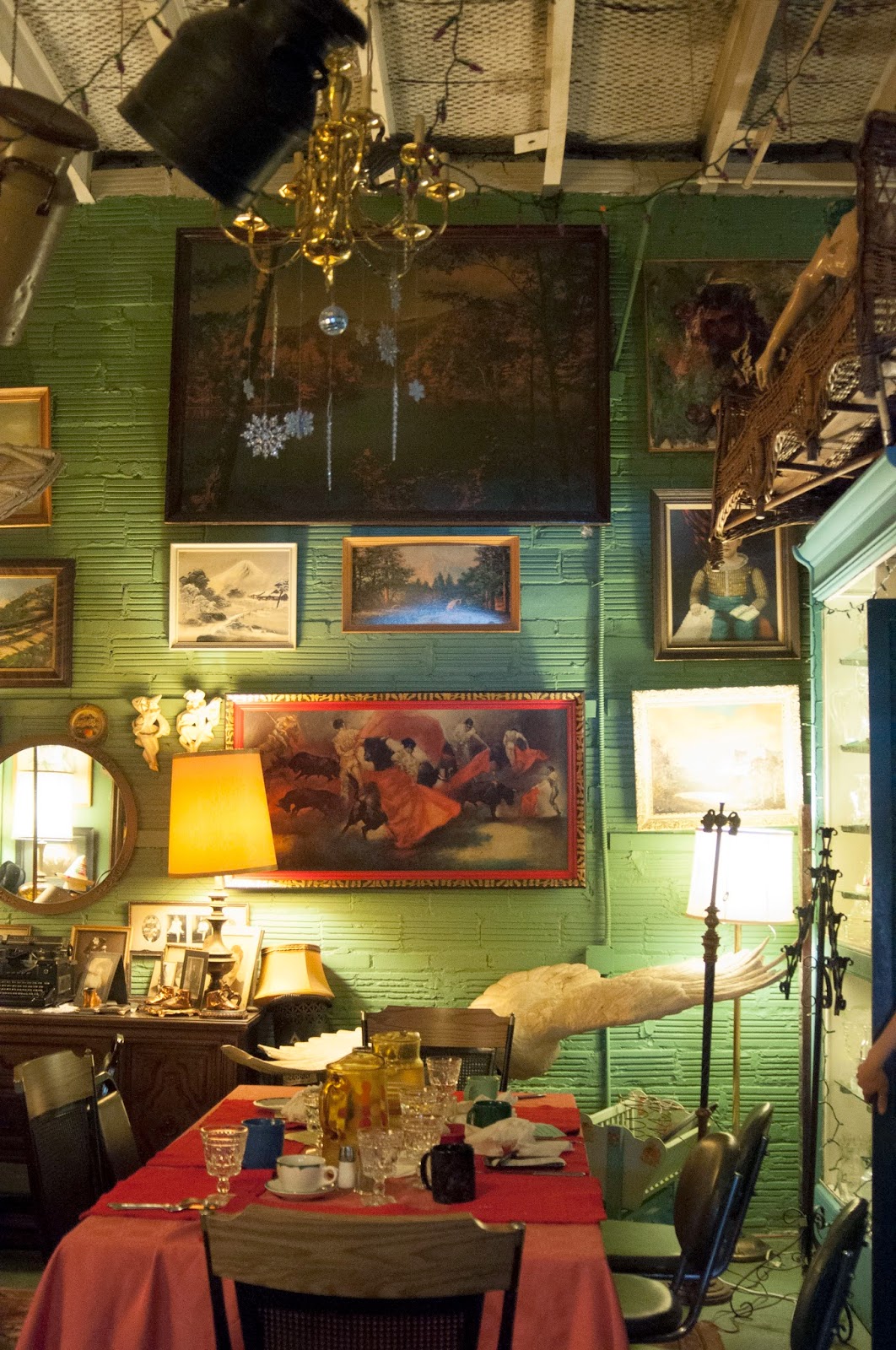 Tables are adorned in vintage tablecloths in a variety of colors and textures and you drink out of vintage glassware in infinite patterns. The buffet is chock full of delicious food--cucumber salad, couscous, cakes in infinite flavors you didn't know cakes even came in (mint chocolate, chili chocolate!), and of course those noodle dishes. My favorite is a penne walnut balsamic raisin concoction, but TS's peanutty noodles, which really taste like a ton of peanut butter has been stirred in with them alongside a bunch of vegetables (and I mean that in a really good way), come a close second. After eating, I traipse around the restaurant taking pictures and I even find a rad little pair of earrings for $1. Good god, Pittsburgh, you are spoiling me.

Post-brunch, it is time for AM to leave. We hug our goodbyes then TS and I hang out on the porch and have a long, meaningful conversation about relationships and academia and the two combined. There is something in the air that tightens my throat, makes me know that I'll be leaving soon. It's that same emptiness I felt when I pulled away after graduation: who knows when you'll be back? However, I still have a few more hours in Pittsburgh so I'm going to make them last. We head to Harris Grill, on Ellsworth Avenue, for drinks and vittles with SC, who is also visiting this weekend. We sit outdoors and make selections from their massive crazy drink menu, but as I page through I don't know who I'm kidding--I'm obviously having their famous frozen Cosmo. Or two of them. TS and I split a mac and cheese with veggies and it is absurdly delicious.

A few sunshine-y hours later, it's time to head back to the house. EL is picking me up and we're going to an outdoor concert at some place 30 minutes away that I've never heard of. Adventures! But before we go, TS has to leave. His drive back home is hours long. My throat does that tightening thing again. But luckily he's around New York with relative frequency, so I feel better when we say goodbye. 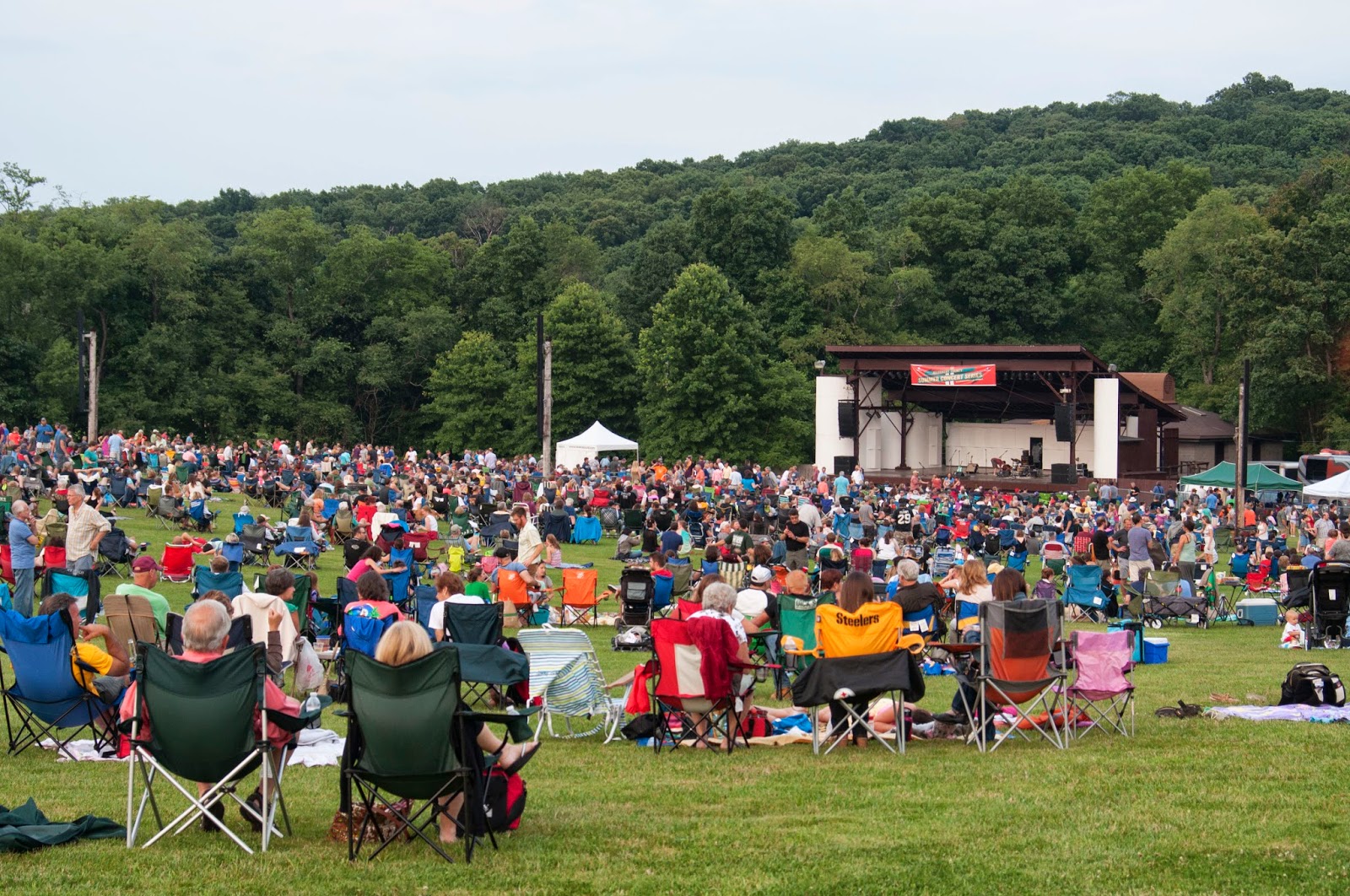 In EL's car, she says she hopes I don't mind that Pandora is on the Shakira station. We drive through Lawrenceville, the place where all the cool indie and DIY crowds hang out, and into the suburbs. The suburbs in Pittsburgh are different than other places I've seen because they're so country. Not in mannerism, but appearance: long, winding roads cushioned by green grass and a whole house's worth of space in between houses. Eventually, we roll up to the Hartwood Acres Amphitheatre and my brain sort of explodes. It's all trees and grass hills and and people in lawn chairs (some with Pittsburgh Steelers tattoos) and I just love it. 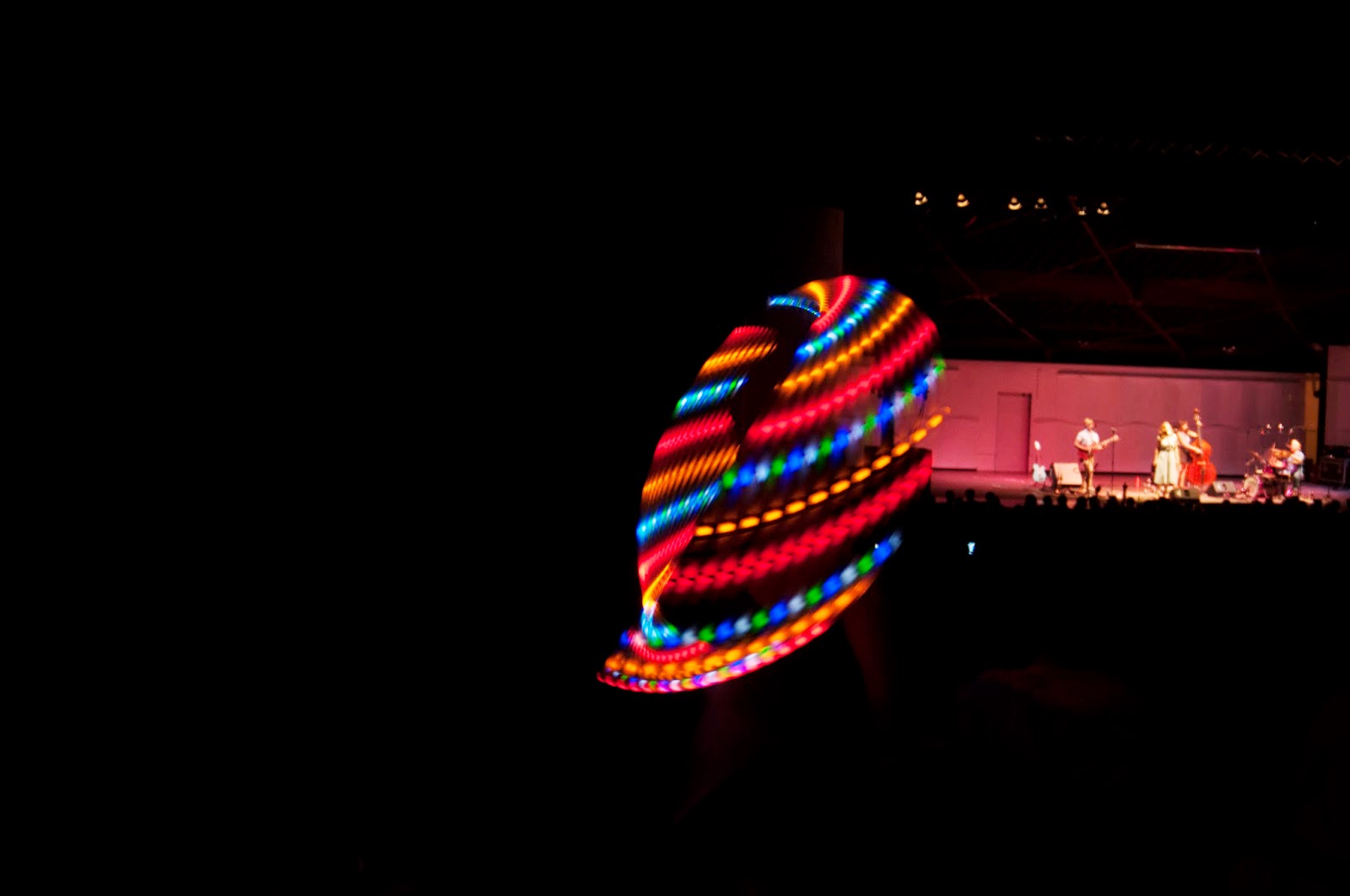 The air is cool and it feels like being in the mountains. We set up camp on a beach towel EL brought and we listen to the band Lake Street Dive strum their jazzy-bluesy sounds--one of my favorites is the song "Bobby Tanqueray." Parents hold their babies and a girl spins her LED hula hoop when it gets dark.

I felt that mythical summer feeling when everything is slow and moments have more meaning. In just a few hours I will be up and at 'em on my train back to New York. I want to sit and take everything in just a little bit longer. 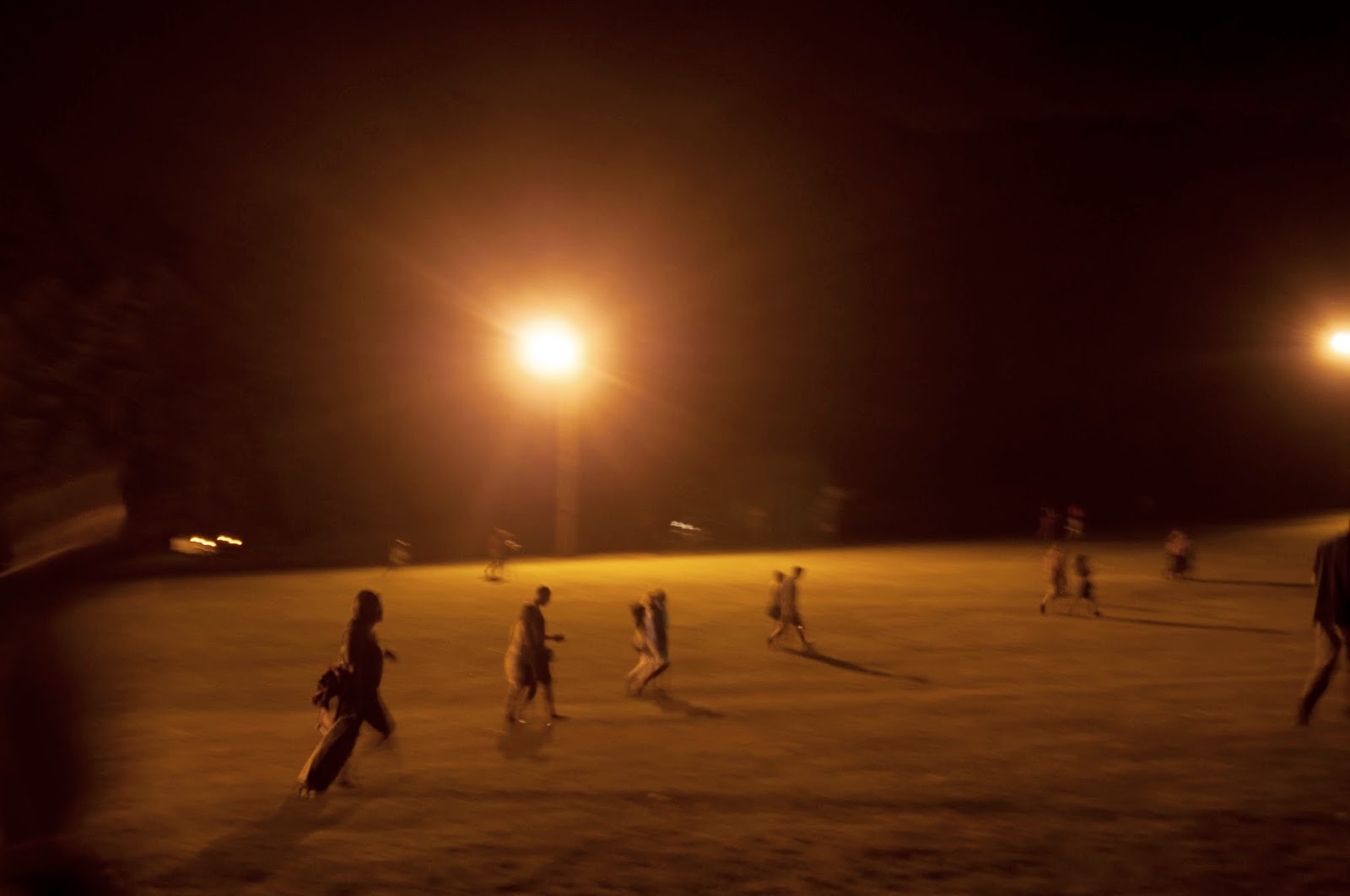 And for your viewing/listening pleasure, here are two videos I took of my friends talking about what they love about Pittsburgh, while driving to Mad Mex. Probably more for listening since my video skills are sub-par at best. Listen for my chaotic ramblings interspersed with their commentary.

Posted by miss-manhattan at 1:12 AM No comments: