Meatballs Are The Best Balls

Let me begin this by saying I am not an especially carnivorous person. I do not enthusiastically shout “Go Meat!” like the happy bratwurst people on the Hillshire Farm commercials. But I do have a love for a tasty meal, and any restaurant that supplies said tastiness is one that I will hold in high regard. I’ve written about a few restaurants here, but most of them do not have a to-go stand where you can order naked balls.
I am, of course, talking about meatballs. At The Meatball Shop in the Lower East Side, you can order your balls naked, meaning not on bread of any kind, or you can order them on a baguette as a hero, as sliders or as a ‘smash’ on a brioche bun. There are also numerous kinds of meatballs— including the classic beef but also spicy pork, chicken, vegetable, and meatball du jour—and sauces—classic tomato, spicy meat, mushroom, parmesan cream, pesto, etc. 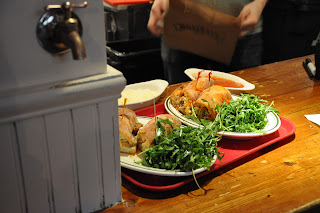 Though the restaurant is primarily known for its meatballs, you will also have your choice of risotto, a number of sides, desserts (homemade ice cream sandwiches on specialty cookies!). And don’t forget a drink because, as the restaurant says, “you’ll get thirsty eating our balls”.
When TDS and I arrived at 84 Stanton Street, a giant maroon sign indicated to us that we were, in fact, at The Meatball Shop. It was a tiny little restaurant, whose small outdoor tables were filled with customers, even on a somewhat cloudy, 50 degree day. Upon entering the restaurant, we found there was an hour and a half wait, perhaps applicable to the restaurant’s small size and current hotspot status. After schlepping from Brooklyn, however (it was the same day we had gone to Williamsburg), we were not to be deterred. The restaurant had a takeout stand that was only a 20-minute wait. We had seen a park nearby, so decided to grab our balls and sit on a bench with them instead.
We both ordered the ‘smash’ sandwich, which consisted of two meatballs “smashed on a toasted brioche bun with choice of sauce + mozzarella or provolone cheese served with a small side salad” for eight dollars. I got my beef balls with classic tomato and provolone. Usually one for exotic tastes, I decided to keep it simple since I was trying their balls for the first time. Upon receiving our balls in a minimalist brown kraft paper bag, we quickly skittered outside like little squirrels, super-hungry and so excited to try them. In the park we saw people before us had a similar idea, as a lone Meatball Shop bag flitted across the concrete when a gust of wind rolled past.
Then, the sandwiches happened. Rather, they did not so much happen as they were “a happening.” An event. A happy wave of tastes cresting through my mouth. The sweetness of the brioche, the friendly tang of the tomato sauce, the saltiness of the beef and the smoothness of the provolone all pressed together in my mouth and I wished it would not end. I had meatball sandwiches before, but they were nothing like this—the meatballs were tough, the sauce made the bread fall apart; generally a disaster. But this sandwich was mushy in a good way, and the bread gave it just enough thickness so it didn’t fall apart. Happiness.
Beyond just the fantastic flavors happening in my mouth, though, what I really liked about the sandwich is that it was so well thought out. You could really tell that everything had been planned, from the bread used to the way the sandwich was assembled. It wasn’t just slapped together randomly—it was a thoughtful slap, and the thoughtfulness made it even more delicious, somehow.
Founders Michael Chernow and Daniel Holzman say the restaurant is dedicated to simplicity and deliciousness, and I can tell you without hesitation that this is certainly the case. I’m not the only one who thinks so, either. Though the restaurant opened in February 2010, it has already been featured in publications all across the country, including but not limited to Details magazine, New York magazine, and many more. What’s even better is that the restaurant is thoroughly accessible—there may be long lines, but the takeout is relatively fast and the restaurant is open until 4am Thursday through Saturday, and 2am Sunday through Wednesday. They also don’t take reservations. All of this, I think, adds even more to the simplicity. Come in whenever, eat delicious food, the end. Well, Meatball Shop, if your doors are open, I’ll be there. The end.
Posted by miss-manhattan at 1:28 AM No comments: