Rockin' in the Free World?

I had heard about the Global Citizen Festival peripherally; that is, I vaguely remember someone posting about it on Facebook. There was some kind of lottery, something, free music, a park? But it wasn’t until HL told me about it that I actually listened.

The Global Citizen Festival arose from The Global Poverty Project, dedicated to ending poverty around the globe within this generation. It turned out to be the “largest syndicated charity concert online and in broadcast TV history,” drawing 60,000 people to Central Park’s Great Lawn. The show, completely on the free, included none other than K’Naan, Band of Horses, The Black Keys, Foo Fighters, and Neil Young with Crazy Horse. HL had entered the lottery to win tickets, got two, and invited me.

At 11:30am on Saturday, September 29, I went to buy snacks. I didn’t know how long we’d be in line, how crazy expensive food would be, if we’d even be able to move from our spots to get any. I knew 60,000 tickets had been given out, so I didn’t really want to be at war with that many people for a stupid sandwich. So Baked Ruffles and Pirates’ Booty it was. The gates were set to open at 2pm, so HL and I arrived at noon (well, she did—I got there at 12:15 because the crosstown bus is sometimes a bitch) and waited outside Central Park. We snacked, we talked, we tried not to listen to obnoxious teenagers standing in line with us. And, finally, the line moved and in we went. 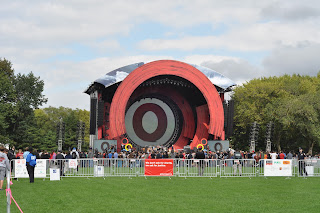 We were sent on a long, winding expedition through the park, I think traveling something like 16 blocks north of where we were once we got inside. Slow walker that I am, HL reached out her scarf to me and said, “Don’t let go!” as she yanked on the scarf and hurried me along the path with her. We were among some of the first hundreds to arrive and found ourselves a snug little spot up against the barricades, in perfect view of the center of the massive stage, a massive reproduction of the Global Poverty Project logo. There were some not-so-great things about the way the concert was set-up, but I’ll ignore those here because, well, I got to see five pretty awesome acts for free. 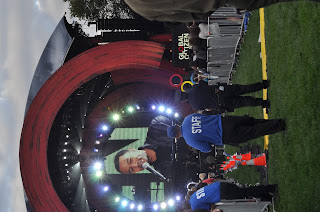 While I have great respect for the concert’s vision, the way the information about poverty was presented was a little counterintuitive. That is, we were simply a captive audience: I’m willing to venture that most of us just wanted to hear the music. I’m basing this on the fact that multiple times throughout the evening groups of people shouted “MORE MUSIC” and the name of the band slated to appear after each informational video. This is not to say that I think the cause is stupid and I certainly do not mean to appear ungrateful, but I am saying it’s important to know one’s audience. It is, however, very exciting to know all of the work that’s being done to end poverty by all of these fantastic celebrities, supermodels and musicians. I am glad they all have the time and money to spare for such a worthy cause. Unfortunately right now in my life I am not in such a place, but I assure you as soon as I do I will donate some extra dollars to a worthy cause. 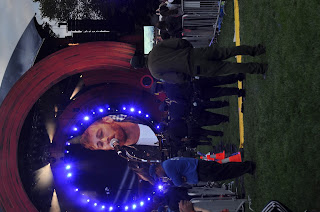 That being said, let’s talk tuneage. Way to go, Band of Horses! I would definitely buy your album, and it was awesome to hear everyone sing along to “Great Salt Lake.” And a surprise appearance by John Legend, singing John Lennon’s “Imagine” with just a piano. The Black Keys? Killin’ it. BABY I’M HOWLIN’ FOR YOU (da da dad a da…). Dan Auerbach, why are you so sexy? You’re like an indie blues rock James Dean. Please and thank you. I didn’t remember you being that sexy when I saw you in Pittsburgh (also for free, incidentally). Foo Fighters, on point as always. Thanks for playing the hits! That girl three rows behind me screaming “WOOOOOOOO” was a little much, but you’re worth it, Dave Grohl. He said this was the last time they’d be performing for a while?!?! Sad days! I remember when I saw them in concert with Weezer in 2005 (side note: I’m old). Never realized how uplifting many Foo Fighters songs are! “Times Like These” indeed. Actually, it was hearing that song that finally incited my desire to purchase a Global Citzen Festival t-shirt. I wanted to look back and be able to show my kids or godchildren this cool thing I went to—as if 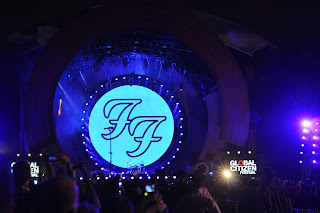 someone would show me now their Live Aid t-shirt from the 1980s. Except I think people had to pay for those tickets? Whether I thought it was the most awesome concert ever or not, it was nonetheless historical, and it’s cool to know you’re a part of history. 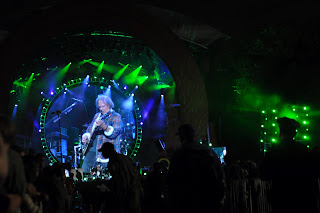 A lot of people cleared out before Neil Young played last with Crazy Horse. After that, all at once a bunch of dudes over 50 simultaneously began to smell like weed and rock out. Curious. I didn’t really understand why until the end of the “Walk Like a Giant on the Land” song where it…didn’t actually end and was just a series of thrusts on the guitar and drum executed simultaneously for god literally knows how long. At one point I fell to my knees and just started laughing, holding on to HL’s leg. Since when was Neil Young and Crazy Horse a jam band? Even so, he can shred a guitar like nobody’s business, even though he is older than…lots of things. Until I heard “Giants,” though, I was all about getting some Neil Young records and just listening to him shred melodically while I worked. He didn’t play “Heart of Gold,” I imagine because he’s Neil Young and he just does whatever the hell he wants and he’s not getting paid anyway—I’ve been told Dylan does the same in concert. He finished with “Rockin’ in the Free World,” 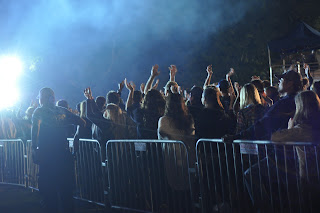 accompanied by Auerbach and Grohl on guitar, everyone shredding and being awesome (forgive me, I am a tad tired from standing for 10+ hours and my vocabulary is slightly lacking). It was cool, I got what they were trying to do, I don’t really know if they succeeded, but I got to hear some sweet tunes for free, so it wasn’t by any means a loss. It made curling up on my couch and falling asleep that much easier, knowing I didn’t have to be anything other than a pair of ears and eyes. And I am always happy to hear and see some good rock and roll.
Posted by miss-manhattan at 7:39 PM No comments: