“Is this acceptable attire for Norwegian church?”
I turned to my dear new Norwegian roommate, CN, and did a spin for approval. I was wearing black pants, a sweater, and cowboy boots. It was a sentence I never thought I would say.
“Yeah, of course!” she laughed. “There are no rules in Norwegian church.”
That’s something I could get behind. I might convert to Norwegian yet! Any church that let me wear cowboy boots was obviously legit. But really, it’s not “Norwegian church” it’s a Norwegian Seaman’s Church, or Sjømannskirken (I asked my roommate to say this three times. I tried, and she repeated after I pronounced it incorrectly, twice. Finally, I just said”…Okay.” But, to her great credit she said, “Say it.” And I did. Correctly! It’s pronounced “show-man-sear-kin.” CN laughs. “It’s so funny when people try to speak Norwegian.”). The space functions, of course, as a church, but also as a kind of Norwegian community center. They’re located all over the world for Norwegians to congregate and meet each other. Here in New York, it’s located in Midtown East. 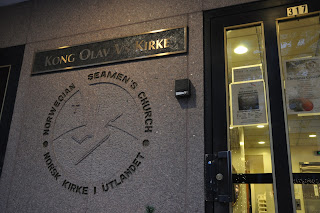 In the lobby there is a cabinet full of white teacups emblazoned with different Norwegian words and maritime flags. A portrait of King Harald and Queen Sonja, Norway’s current king and queen, hangs in the lobby (To this, I ask CN—“Who are the royal-looking people?” I am ridiculous). Their picture appears in all seamen’s churches and consulates. Since Norway has a state religion, Protestantism, they represent the religion as well. Signs in the lobby are all written in the language, as are the periodicals. I am tickled. I feel out of place, but in a good way. 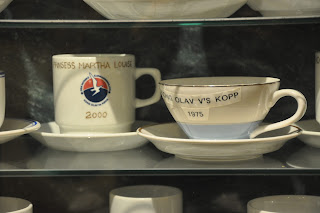 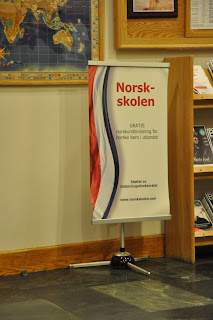 On the program tonight are a selection of American and Norwegian Christmas classics, like “Have Yourself a Merry Little Christmas” and “Mitt Hjerte Alltid Vanker.” The latter is CN’s favorite Christmas song, which translated means “My Heart Stood Still,” and is voiced by Maria (You know, Jesus’s mom). While we are waiting for the concert to begin, though, there are thin gingerbread cookies in the shape of stars and hearts, called pepperkaker (“pepper-ka-kay”) with the beverage gløgg (“gloog”). Gløgg is a hot mulled juice served with a scoop of blanched almonds and raisins, and spiced with sugar, cinnamon, cardamom, ginger, cloves, and bitter orange.
As I write this, I am saying to CN, who is in the other room, “How do you say…” and “What’s does that mean…” It is hilarity and learning at the same time. Isn’t that all we want, really? 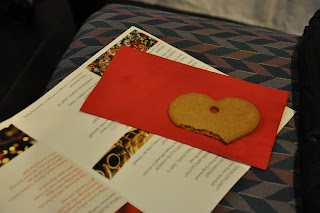 Both the gløgg and the pepperkaker are yummy, but together they’re divine. The hot juice moistens the cookie and it falls apart in my mouth. Like a classic, silly American, I say “The cookie tastes really good if you dip it in the drink!” I hear myself say this and shake my head at myself. CN laughs at me, or rather with me, and smiles.
The concert begins and a bevy of almost all Norwegian singers and musicians take the stage. One of them sings the American songs with a slight Norwegian twang and it makes me smile. America is this crazy place, New York is this crazy place where all this cool stuff happens on a regular basis and we just don’t know it because, really, how often do we go to Norwegian Seamen’s Churches? Not often enough, obviously.
One of them, Solfrid Nestegaard Gjeldokk, sings folk songs like “I Denne Søde Juletid” so beautifully I wish she would record an album so I can buy it and listen to it all the time. An awesome tenor, Nils G. Nilsen does a lovely duet of “The Prayer” with Kjersti Kveli, a soprano. And then there are American jazz musicians Art Baron (the last trombonist Duke Ellington ever hired, in 1973) and and Lee Hogans (who plays with Prince), who knock it out of the park, too. The last song of the concert is “Delig Er Jorden,” which means “Lovely is this World.” CN tells me it’s traditionally sung at Christmastime, which explains why everyone in the audience knows the words. A low hum of people singing filters through the space. “Norwegians are quiet,” CN tells me. The people I hear speaking loudly must obviously be Americans. Typical.
After the delightful show, CN and I saunter over to the stacks of Norwegian goodies, like salted licorice and lefse and flattbrød, the latter two of which are both thin, cracker-like constructions, one sweet (lefse) and the other salty (flattbrød). 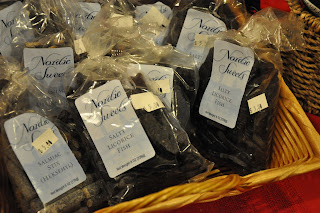 CN buys the salted licorice and asks me to try one. She readies her iPhone to take a picture because, apparently, non-Norwegians find the stuff putrid. Always game for a challenge, I stare at the cylindrical salted candy and take a bite. It’s not putrid, but it’s really, really salty. And weirdly sweet. And licorice-y. Which I guess I should have expected from salted licorice candy.
Fully in the holiday spirit, we walk back to the subway train and resolve to order Chinese food when we go home. You can take the girl out of Manhattan…
Posted by miss-manhattan at 12:04 AM 1 comment: