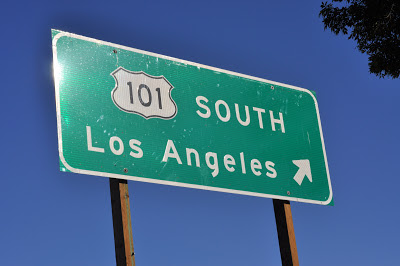 An entire state bursting at the seams with marijuana. Plastic surgery and Botox floating behind tanned skin. Celebrity. Vanity. Convertibles. People who are so laid back they might fall over. These are some of the things that the general public attributes to California, giving it a near-mythic quality, framing it as only a neverland of endless youth that generally lacks substance and has a movie star for a governor.

Not to mention what people have to say about Los Angeles itself, especially while living clear across the country in New York. LA is where culture goes to die, people say. It's an industry city where people are only out for themselves. Strangely, I always wanted to go. I wanted to see if people were right or, if like so many other parts of the country, the ideas were all just rumors that were blown out of proportion. But I knew I'd have to save my pennies if I ever wanted to get there.

It was, then, a happy surprise when I found out I won the Affinitas Lingerie Stylist for Hire competition. After submitting a look and then a video inspired by the company's lingerie, I was selected by two top lingerie bloggers as the contest winner. As the winner, I won some prize money, lingerie, and a roundtrip flight and hotel stay in LA to style a photoshoot for the company's catalogs. I got back this past Tuesday, and I absolutely had a blast.

My journey began at 6am on Friday, November 9 as I woke up and got fabulous before a car arrived at 7 to take me to JFK. On the bumpy ride to the airport, I was tired but unable to sleep, becoming nauseated by the persistent, clunking, stop-and-go of the car in traffic (life is hard, I know--cut me a break). Upon arrival at the airport, a bagel and cream cheese  eased the nausea, as did free wi-fi in the Jet Blue terminal! All was right with the world, except for a nasty stuffed and running nose. But I was going to LA! And I was excited!

Six hours later, I landed at LAX and, like Miley Cyrus, I too had a dream and a cardigan. But also a leather jacket because I was told it gets surprisingly cold at night in LA. The kind ladies from the lingerie company picked me up and took me to my hotel and on the car ride I proved how…green…I was in terms of California-ness. "I CAN SEE THE HOLLYWOOD SIGN!" I said, as I stared out the window, only to discover that it was actually just a building. I talked about the Whiskey-A-Go-Go, the famous punk club and, when asked where it was, I said, "Uh…it's on a boulevard?" Which is like saying "It's on the corner of a street and another street next to the bodega," in New York (or anywhere, for that matter).

After checking in to the Miyako Hotel in Downtown LA's Little Tokyo neighborhood (I also found out, on my last day, that the different areas--West Hollywood, Santa Monica, etc.--are not referred to as neighborhoods, but as cities. Oh. But Little Tokyo is actually a neighborhood.), the ladies treated me to lunch at Daikokuya Ramen, a DELICIOUS ramen/noodle/Japanese joint directly across from the hotel. Normally there's a line outside of the restaurant to get in, but since it was the middle of the day we only had to wait 10 minutes. Vintage Japanese advertisements from the '50s lined the walls, also peppered with the occasional, handwritten-in-black-sharpie 'Cash Only' sign. I wanted to keep eating the ramen, filled to the brim with pork belly, noodles, and bean sprouts, but my stomach wouldn't let me. Though the hot soup and an accompanying green tea did ease my sad little nose. I was in LA only minutes and already I was feeling better. What is it they say about that desert air?

Post-lunch the ladies took me to L.A.'s Fashion District in Downtown L.A., which is a lot like the one here in New York, except it's more of an open-air market and the shoes are really inexpensive (but totally fierce!). I returned to the hotel, shopped and near sleep, but I wanted more.

I called the delightful RE, who had just begun a Master's degree at USC because he is baller and amazing. What are you up to tonight? Let's have a drink! And so we had a cocktail and a lovely chat downtown. Not before I took the first of my many disco naps in L.A., the product of coast-to-coast jet lag. If you are not familiar, a disco nap is a nap taken post-dinner, pre-going out(to the disco, as it were). Sometimes I call just taking a nap a disco nap because it's just snazzier.

Interestingly, in L.A. the bars close at 2am! Last call is around 1:30. I found this interesting because when people talk about L.A., it seems like a never-ending party. But really, everyone drives so they can't stay out too late, or something along those lines? What I learned from living in Pittsburgh, where the bar hours are the same, is that it just means people get drunker earlier. Whatevs. What I found most interesting about our trip downtown, however, is how empty the streets are. Yes, people line up to get into clubs and whatnot, but nobody really walks around. It's almost unsettling, until you get into a store or a bar or a restaurant and it's packed with people. Such is life and the car culture of L.A., but more on that later. After a grand hug, RE and I part ways. I practically fall into bed, having been up for almost 22 hours. But so far, so good!

(To be continued)
Posted by miss-manhattan at 2:40 PM No comments: