I should have trusted my instincts, which said unequivocally, it won't be that bad. Being from South Florida, I had slept through worse hurricanes than what was supposed to hit New York in the form of Miss Irene on Saturday night/Sunday morning. It’s true—I’d managed to live through Hurricanes Andrew, Wilma, and even Katrina sleeping peacefully. Yes, we lost power; yes, we packed up all our patio furniture and put it in the garage; yes, we were sweltering hot in the dead of a humid Florida October and I remember distinctly lying on the Mexican tile (which absorbs cool air) in my house wishing the air would just magically turn on and we’d all be saved. But those were Category 4 storms and above. Irene, as it approached New York earlier in the weekend, was merely a Category 2—small potatoes in comparison. By the time Irene hit New York, it was a Tropical Storm; in Florida, that’s like a sneeze. We’d be going to the beach to watch the waves at that point.
I understand, of course, that in South Florida we are mentally and physically prepared to withstand such storms and the situation is quite different for New York. Trees up here are not as thirsty as they are in Florida, so when there’s too much water they simply pass out and fall over. Drainage systems are not the same, I’m sure. The list goes on. At the same rate, though, if those houses in Key West’s Stiltsville, perched precariously above the water, can weather storm after storm after storm, couldn’t New York City?
I was firmly entrenched in my beliefs. Friends from New York who had never experienced a hurricane called and texted in distress. Was it really going to be that bad? No, I said, without fear. A bunch of wind and rain. Nothing staying inside wouldn’t cure. My confidence was catching, and I was grateful that I was able to set some minds at ease.
I stayed confident until around around Saturday afternoon when, after repeated calls from my mother, from friends outside of New York who feared for my safety, and reading the Mayor’s office Twitter, I began to worry. See, I don’t have a television in my apartment, and I’ve never been much for the news (judge away), so I only knew snippets of what was going on. As I sat down to finally check out some of the details, I felt tiny bubbles of fear beginning to float toward the surface of my brain. I tried to burst them, but they just kept appearing. What kind of Floridian are you?, I thought to myself. But I realized they were the same fear bubbles I got when I was at home during a hurricane—I was never fearless, by any means. But being scared was never going to do anything. You had to roll with the punches, put your patio furniture in the garage, and snuggle up to some Nabokov with a book light when the lights went out.
Since I didn’t have any patio furniture or a book light, I decided it would be a good idea to get some candles (I knew by the time I went out, at 1pm, all the flashlights would assuredly be gone), some non-perishable foods, and…what else did I get? Oh, right. Nothing. 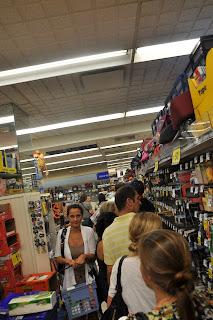 I left home, and there was a line in front of the hardware store near my house. Masking tape Xs began to appear on window after window. I scoffed, having never in my life owned hurricane shutters and never doing anything to my windows but closing the blinds. People roamed the streets with umbrellas searching for necessary hurricane gear. The air was sticky and wet, and after a while I didn’t know if I was sweating or if it was the air.
The non-perishable food shelves at Duane Reade were bare, as were the diaper, battery, candle, and condom aisles. New Yorkers know how to prioritize. I grabbed some tasty apocalypse food—beef jerky with no corn syrup and white cheddar Pirate’s Booty—but couldn’t find any candles. Eh, I’d try another store. All the pharmacies were out of them and I began to worry. I only had two candles in my apartment, and I knew that these stupid fear bubbles would subsist a little bit if I could just get some damn candles. Eventually I found some fancy and not so fancy ones, along with some canned salmon and Chef Boyardees and headed home, satisfied.
I tuned in to the Mayor’s office Twitter and NY1’s weather Twitter while working on an article and got all the updates I needed. The storm was supposed to start hitting around 9pm and be the worst between 2am and 2pm. I braced myself. Directly against orders, I sat next to the window in my apartment—I knew I would feel most unsafe if I couldn’t hear anything. If it got really bad I would just move.
But it never did. Nine pm passed and I heard some wind whooshing outside. Two am arrived and I heard some more. I fell asleep eventually, but I kept waiting to hear the slap and screech of wind and rain against my window that I knew a real, big hurricane will make. No such sounds arrived. 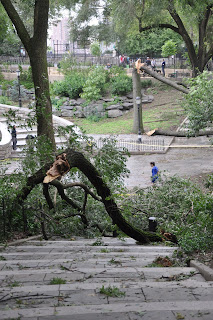 I woke up the next morning and looked out into the street—some leaves covered the wet ground…and that was it. I checked online for some news and found that many parts of New York were unscathed, but quite a few were not so. There was flooding, uprooted trees, more damage I’m sure, but nothing the city couldn’t really handle in the long run, I think. Frankly, I had seen far worse. I mean, almost all New York transit was up and running a day later. South Florida was out of commission for two weeks, if not more, during Wilma and Katrina. New York did not get the worst of this storm. Unfortunately, other parts of the East Coast did and they need our hopes, good will, and help more than we need our complaints. 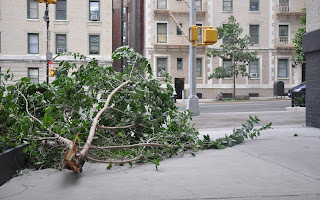 How do I feel about the way government officials handled the event? I think telling people if they didn’t evacuate they’d die was probably not the 100% best course of action, or true, as it turned out. But at the same token, if people didn’t think their lives were threatened, they wouldn’t move a muscle. Just in case they were threatened, it was important to get them to leave, so hyperbole I think was the only way officials knew how to deal with it. I think the city did its best to handle a storm it had never experienced before—evacuation centers, dissemination of instructions and information, and so on. In the future do think it will be different, though. 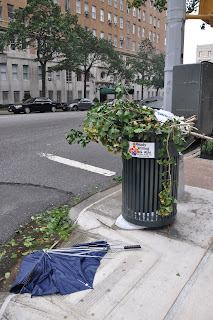 I think experiencing a hurricane in your own home (i.e., not your parents’ home) is a rite of passage in South Florida. Okay, so I was a little more north for this one, but I feel good to have gotten through whatever it was on my own. Would I do it again? No. Next time I’m having a hurricane party. There will be tequila. You can come if you want. If there is a next time, of course.
Posted by miss-manhattan at 1:39 AM No comments: