The Graham Home for Old Ladies 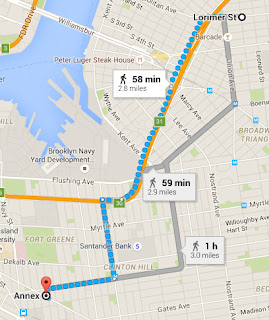 Every so often when I'm in Brooklyn, I'll get ambitious when I have time to spare and walk to disparate parts of the borough. One such time was yesterday, when I traveled from the Lorimer Street stop on the L train to the Annex Cafe in Fort Greene, a 2.8 mile walk. While I usually doubt the pacing of the Google Maps walking figure because I have short legs and don't like to rush anywhere, the 58-minute trip time was very accurate given the aforementioned details and the fact that I was also schlepping maybe five pounds of camera equipment on my shoulder.

My trek began down Marcy Avenue in Williamsburg, populated by its banks and sandwich shops and unusual interior design stores, which later turned into Williamsburg Street West. My jaunt down this street became a tour of the Hasidic part of Brooklyn. Even in what was nearly 90-degree heat yesterday, the men still wore shtreimels, large black circular hats surrounded by fur, with their long black jackets, longsleeved white shirts, and black pants. Women had their arms and legs covered, their heads topped with wigs. I trotted past them in my linen pants and tank top, my hair in a bun at the top of my head, chattering to my mother on my phone, every so often receiving a look from them as if I were a mohawked punk with my hair a shade of something like neon pink and spears hanging from my septum. What on earth are you doing here?, they seemed to say as I walked past their school buses and apartment buildings and flyers pasted to streetcorners all printed with Hebrew phrases. Gentile, goyim, I must have seemed in comparison, though they wouldn't have known my own Jewish mother was on the other end of the phone.

Williamsburg Street West turned into Park Avenue and then a left onto Washington Avenue where the real fun began. I had never walked through Clinton Hill before, and was unaware of its proliferation of 19th century townhouses and mansions, many of which today have been converted into multi-family homes. Some, however, are just straight houses smack dab in the middle of Brooklyn, with curling wooden porches and staircases, some even with the original glass the buildings were constructed with when they were first built. The street was part of the Clinton Hill Historic District, which features many homes of similar structure up and down its streets. While the area in the 19th and early 20th centuries was an escape from urban life for wealthy professionals, by the end of the 20th century it became quite the opposite. Patti Smith wrote of an apartment she and artist Robert Mapplethorpe shared in the area in the 1960s, writing "its aggressively seedy condition was out of my range of experience. The walls were smeared with blood and psychotic scribbling, the oven crammed with discarded syringes, and the refrigerator overrun with mold." Today, though, it has experienced a resurgence, with many parts of the historic district clean and tree-lined, young people and families milling about. 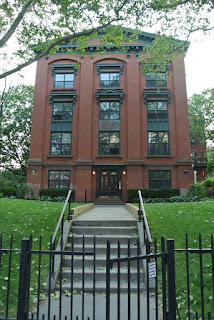 My favorite spot on Washington Avenue, however, was a building that read "The Graham Home for Old Ladies" and was built in 1851. The plaque stopped me in my tracks: were our forebears so blunt as to call a female retirement home such a thing? No, as it turns out. According to The New York Times, the building was originally built as the "Brooklyn Society for the Relief of Respectable Aged Indigent Females," by a wealthy lawyer named John B. Graham. Ladies had to have a certain level of manner and propriety to be admitted to the venue in the era, though once the area and the building went into decline in the 1980s, far less was required when it became a brothel. It became empty in the 1990s, however, and was redeveloped in 2000 to be condominiums. Its plaque is simply a modern nickname for a building full of apartments that sell for over one million dollars. 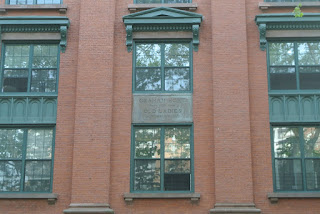 Shortly I turned down Lafayette Street, which was more familiar to me as the home of Brooklyn Flea, and found myself in the familiar territory of Fulton Street after turning down South Portland Avenue. I holed myself up in Annex, a coffee shop populated with a mix of modern tables and chairs that were still somehow friendly in light tones of wood. One of the edges of the space featured a raised area populated by spiky green plants and luscious, sloping leather chairs that looked lovingly broken after the shop's opening just five years ago. I was supposed to meet friends next door in about 45 minutes, so I sat in one sipping an iced coffee and reading Joan Didion's The White Album while I let my body relax. It's funny, I had walked past Annex so many times on jaunts through the neighborhood and I never actually had the occasion to go in, but I would go back in a heartbeat.

Time flew quickly and soon it was time to pop next door, to Habana Outpost to meet AR and his friend C. We would grab sandwiches and head to Fort Greene Park, where the Alamo Drafthouse was showing a free screening of Best in Show. Cuban sandwiches in tow, we made our way to the park and found a perfect spot on a hill so nobody of the hundreds of others in attendance would block our view. Night fell and the air cooled and we watched Jane Lynch and Jennifer Coolidge and their standard poodle Rhapsody in White compete against other dogs in Christopher Guest's 2000 film. , We ended up making friends with an Italian Greyhound behind us who would give us all kisses and cuddles throughout the movie, though we suspect he was really just after the pork from our sandwiches.
Posted by miss-manhattan at 11:07 AM No comments: