There comes a time in every lady's life where she has to embark on an aquatic journey to places unknown with a dear friend of hers who happens to have the same name, though spelled differently, and "see some mutherf*cking art."

So yeah, AS and I went to Governor's Island for Figment!

I had never been to Governor's Island before, and was intrigued to find that it requires a very short (15 minute) ferry trip across the raging waters surrounding Manhattan. We stood at the helm of the boat on the way over, watching Manhattan slowly tiptoe away from us while Governor's Island came into view, evidenced by the large signs overhead. The island was originally used to develop defenses and munitions during the Revolutionary War but now, thankfully, it plays host to a trove of events like Governor's Ball and our aforementioned reason for being there, Figment.

No, Figment is not just the lovable purple dragon who has a penchant for innovation at Disney World, it is also a free and free-form art fair on the island. People come and make interactive installations, they construct clever and imaginative tree houses as well as sites for dancing and for mini-golf, they hula-hoop, they hand out free costumes (my favorite was a Heinz Ketchup Packet, though others included tomatoes from Veggie Tales, Minnie Mouse, and fairy princesses), they build tree houses, they hand out QR code tattoos with which you might feel hesitant adorning your wrist when the man who hands it to you says he wants you to scan it so you can watch a video of him, and everyone has only the best intentions (the QR code linked back to a video of this gentleman singing "Head, Shoulders, Knees and Toes" and it was really quite adorable and totally appropriate).

For Figment, you just kind of show up with your artwork and there you are. Some installations are political (a tree made from McDonald's french fries--despite having been left outside for two years they looked almost the same as when one purchases them in their signature red paper containers), some are whimsical (an enclosed dance space made of recycled water bottles and containers), some are just sort of present (a teepee). Figment is like Burning Man, but far less scary, with no initiation, and child-friendly--it follows the 'Leave No Trace' ethic of Black Rock City, NV, in that you can bring whatever you like to show your art as long as any reminders of its existence are completely gone when you leave. It has this community feel, where everyone feels kindly toward another and is just there to appreciate the goodness of sharing work. Also, chicks with purple hair and dudes in pirate pants hula-hooping in wizard costumes!

Children and adults alike frolic in the exhibitions, though there is no climbing allowed on the artwork! We bounced on the bouncing balls, we surveyed the grounds from a treehouse painted in wild, neon colors, we boogied in the recycled bottle bubble and well, we just sort of looked at the teepee because it wasn't open when we were there (it was really cool to look at, though!).

The actual organization of Figment is a non-profit dedicated to building community through participatory art. Artists submit their work to be listed on the site, but even if people haven't done that they can still just come and share. The organization doesn't actually sell anything during the fair, either. The event runs on donations and is completely volunteer-driven.

I felt like I was in a hippie wonderland for a few hours, watching people play and just really enjoy themselves in a good-natured way. Perhaps New York has jaded me, or maybe just the general world has, but I feel like that's something we don't see nearly often enough. Fun, community, and sharing with no subtext. I mean, there was subtext in some of the art, but you know what I'm trying to say.

We even found ourselves in a child-like state, excited about strange temporary tattoos, interactive wooden wheels that clattered bells when you spun their handles, bicycles for four, mini-golf made out of old desktop computer parts, and a Game of Thrones replica throne. Not to mention a Mister Softee truck, which both of us realized we hadn't had in years (a Cherry Dip for me and a Chocolate Dip for AS). Ah, youth!

We made our way back to the ferry and a gentleman in a brown-fringed caveman costume rode past us on a bicycle. "Happy Figment!" he said. Happy Figment to you as well, sir!

As the saying goes, sometimes it's nice to forget you have bills to pay and lose yourself in a temporary dance space made of recycled water bottles. Or, you know, something like that.

Check out some pictures from the day! 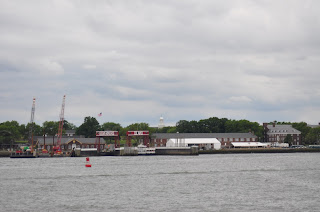 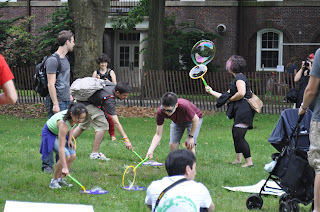 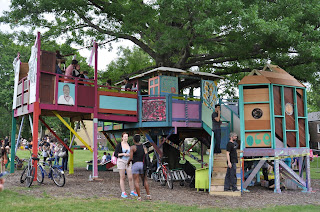 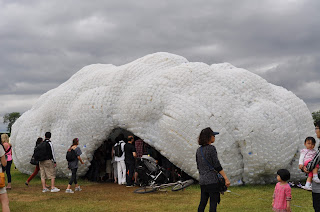 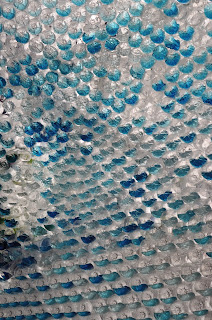 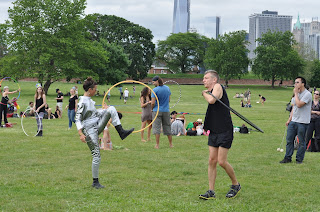 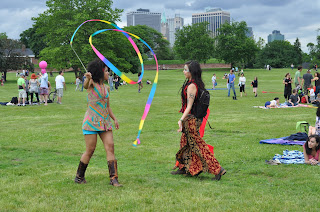 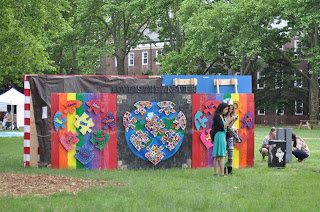 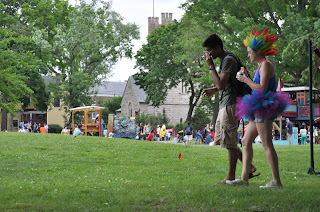 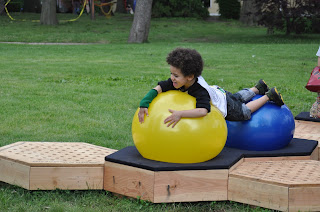 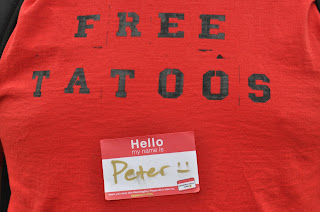 Posted by miss-manhattan at 11:25 PM No comments: