You wouldn’t think there’s a place called Sunnyside in a city that had three blizzards last winter, but strangely enough there is. It’s a neighborhood tucked away in Queens, right off the 7 train, that I had the pleasure of visiting when writing a story about it for a magazine recently. My assignment was to walk around the neighborhood and find cool things to do, places to eat, things to see. It turns out Sunnyside is a cultural fondue pot, with vendors and restaurants from places all over the world—everywhere  from Nepal and Russia to China and Colombia. 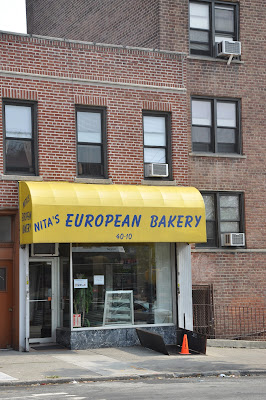 Though it didn’t make it into the article, my favorite place was Nita’s European Bakery, a Romanian bakery in a little space snuggled right next to Greenpoint Avenue under a yellow vinyl sign for about 30 years. I absolutely loved its warmth. Two little tables sat to the slight left of the doorway, display cases filled with cookies, cakes, and pastries savory and sweet forming an L shape. Romanian crooners’ CDs were sold behind the counter, along with coffee, iced or hot, for $1.50-$2.25. Jugs of candy lined the edges of the cases. Signs in Romanian written in swirling, red cursive hung on the wall. In the back, the owner apologized for not being able to answer my questions right away because she was in the middle of making a meringue.
So often in Manhattan, or anywhere if you really think about it, you’ve got bored teenagers with lip piercings they’ll one day regret shoving your cupcakes into a paper box, smudging the frosting all over the inside, not even caring about where the sprinkles end up. The attendants at Nita’s, however, were just so kind. Yes, they knew I was there for a magazine, but I’ve had people respond not-so-nicely even upon hearing that. They offered me buttery, flaky pateuri—like a puff pastry, almost—stuffed with beef (or cheese, if you so desire), that melted in my mouth. 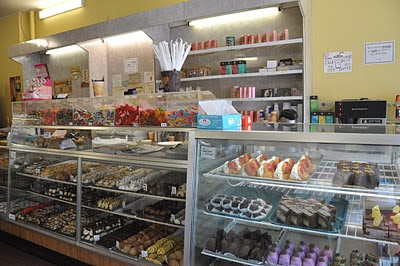 They helpfully explained all of the different Romanian pastries (it’s a Romanian bakery), like savarina (vanilla cake with orange syrup), amandina (chocolate cake with rum syrup, chocolate crème and chocolate icing), and mascota (chocolate ganache, dried fruit, lime, lemon, orange peel and dark chocolate). Each of the delicious-sounding treats, which were really quite large, clocked in at only $2.25 each. I couldn’t believe it—the mere sight of such delicacies in Manhattan costs $5 at least! But the bakery was inexpensive AND delicious (MASSIVE sugar cookies for only 75 cents!), though it is cash only.
“Here, have a Linzer tart!” the girls behind the counter smiled. Having already had my fill of pateuri, I laughed and declined, but they happily persisted. “No, it’s fine! You have that one savory, and this one sweet! You take it home and eat it later.” Okay, I said finally. Who was I to decline a Linzer tart that was half the size of my face? I thanked the girls profusely, and we all smiled. I just felt so welcomed into their store, even as a complete stranger. I think that they would treat anyone so kindly who came in there, however. 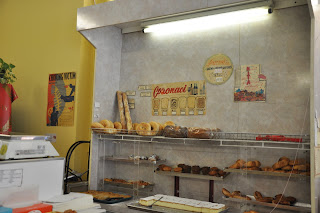 I know I am not wrong when an elderly woman sitting at one of the tables pipes up. Her name is Mary, and she was born and raised in Sunnyside. She has been coming to Nita’s for a very long time, she says. “She’s one of our best customers!” one of the girls smiles behind the counter. Nobody goes back someplace repeatedly if they’re not treated well, no matter how buttery, flaky and delicious the pastries may be. This makes me happy, and I’m glad that even when the reporter leaves the customers will still be treated kindly. Their delightful nature actually kept me in good spirits the whole day. There are few times I have felt so instantly welcomed upon entering a place, in New York or anywhere for that matter.
Not one for sweets usually, I didn’t actually get around to eating my Linzer tart until about a week later. I was expecting it to have gone stale and crumbly, but no such thing happened. The cookie was fluffy, if that’s possible, and the powdered sugar stuck deliciously to my lips as I sunk my teeth in. The raspberry jelly was fruity and not too sugary, and with the fluffy cookie it was surreal. For your fill of Romanian and non-Romanian deliciousness, check out Nita’s European Bakery, at 40-10 Greenpoint Avenue in Sunnyside, Queens (718.784.4047). I decided this is the kind of stuff they serve in Heaven, if such a place does actually exist.
Posted by miss-manhattan at 12:27 AM No comments: