You know those times when you're a kid and you say to yourself, "When I'm older, I'm going to have sleepovers with my friends and eat ice cream ALL THE TIME!" Except you get older and then you never do, and that's kind of sad.

Two of my friends brought that up in the last few months, and in that time we've reversed the clock. Maybe it's because I was an only child growing up, but even to this day when I have to leave my friends at the end of a dinner or a night out, I always feel like I've left part of myself with them. I get into a cab with a sigh and watch the lights flicker past on the dark skyline. It's like there will never be enough hangouts, never be enough time spent with the people I hold most dear.

Once in a while, though, we'll do a sleepover. And you know what? At 12 or 26, sleepovers are still the best. You get to hang out with your friends til you're too tired to go home, and then guess what? You don't have to go home! And you don't have to ride the subway with gross morning breath in yesterday's clothes, wondering if anyone sees the hangover that by this point has tattooed itself on your forehead.

J and I hadn't seen each other in a year and a half, though we live mere boroughs away and have known each other since we were 14 years old. I went to see her at a concert last week, and we agreed to make a night of catching up this weekend. Her new place is out in Astoria, though she was kind enough to pick me up in her car. I packed a bag for an evening away as I would have when I was a kid--pajamas, toothbrush, a clean shirt for the next day--and jumped into her car with a more grown up addition to my luggage, a bottle of champagne. Because if you can't celebrate a hangout with your girlfriends, what can you celebrate?

The times I have been to Astoria, I very much enjoyed how it's international and vibrant in a quiet way. There's almost no hustle and bustle, and there are people from all walks of life--young and old, families and singles. It's just far enough away for J, who says the neighborhood's small-town feel is perfect for "people who don't want to fuck with the big city," like herself.

Dinner took us to Agnanti, a Greek restaurant on Ditmars Boulevard. Decorated with famous screen couples from 1960s Greek cinema, the restaurant had long wooden tables and a real furnace burning off in the corner. Save for the Amtrak trains running above us on the bridge, I felt like I was far from the city, in a small town restaurant nestled away from honking horns and flashing lights. We ate bread dipped in olive oil and pepper, creamy tzatziki thick with cucumbers, deliciously charred grilled vegetables, mussels in white wine sauce and beef stew. I had a glass of retsina, a Greek white wine, which J informed me would taste like pine needles. I raised my eyebrows but decided to try it anyway. It was delicious, kind of like a chardonnay that, yes, tasted of pine needles but also smelled of olive oil (I learned that retsinas get part of their flavor from tree resins, so much of that makes sense). 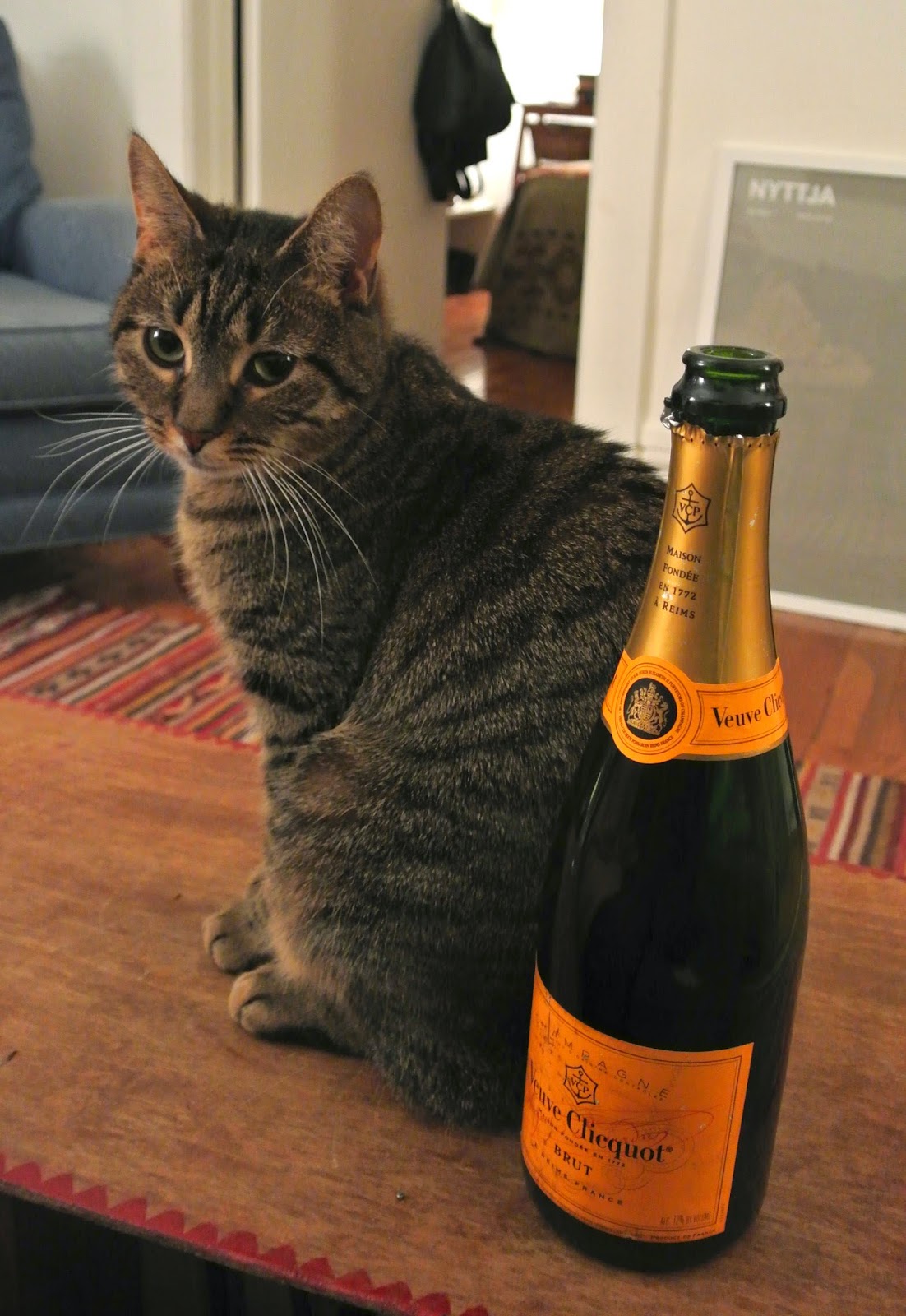 After a dessert of Greek yogurt with berries and another neither of us could define (it was complimentary!), we took back to J's abode for champagne. We talked and talked about our families, about men and boys bad and good, about beauty standards and relationships. I have always believed that one of the best feelings is being able to sit and talk with your friends you haven't seen in a while and it's like no time has passed. J is as much of a positive force as she always has been, magnetic and passionate about the world around her. She is curious about my life and I about hers. We have seen each other grow and appreciate the journeys we have taken. J's cat Penny nestles next to our champagne bottle as if protecting it from intruders. Luckily, soon there is no more champagne to protect and we fall asleep.

In the morning, we take a quick gander in the snow through Astoria Park, a massive (by New York standards) stretch of open land leading to the East River. Bridges glide over the top of the park and through the snow you can see the Manhattan skyline. I personally can't wait to see Astoria Park in the spring and summer, when it's doubtlessly bright green and perfect for a day by (but definitely not in) the water. 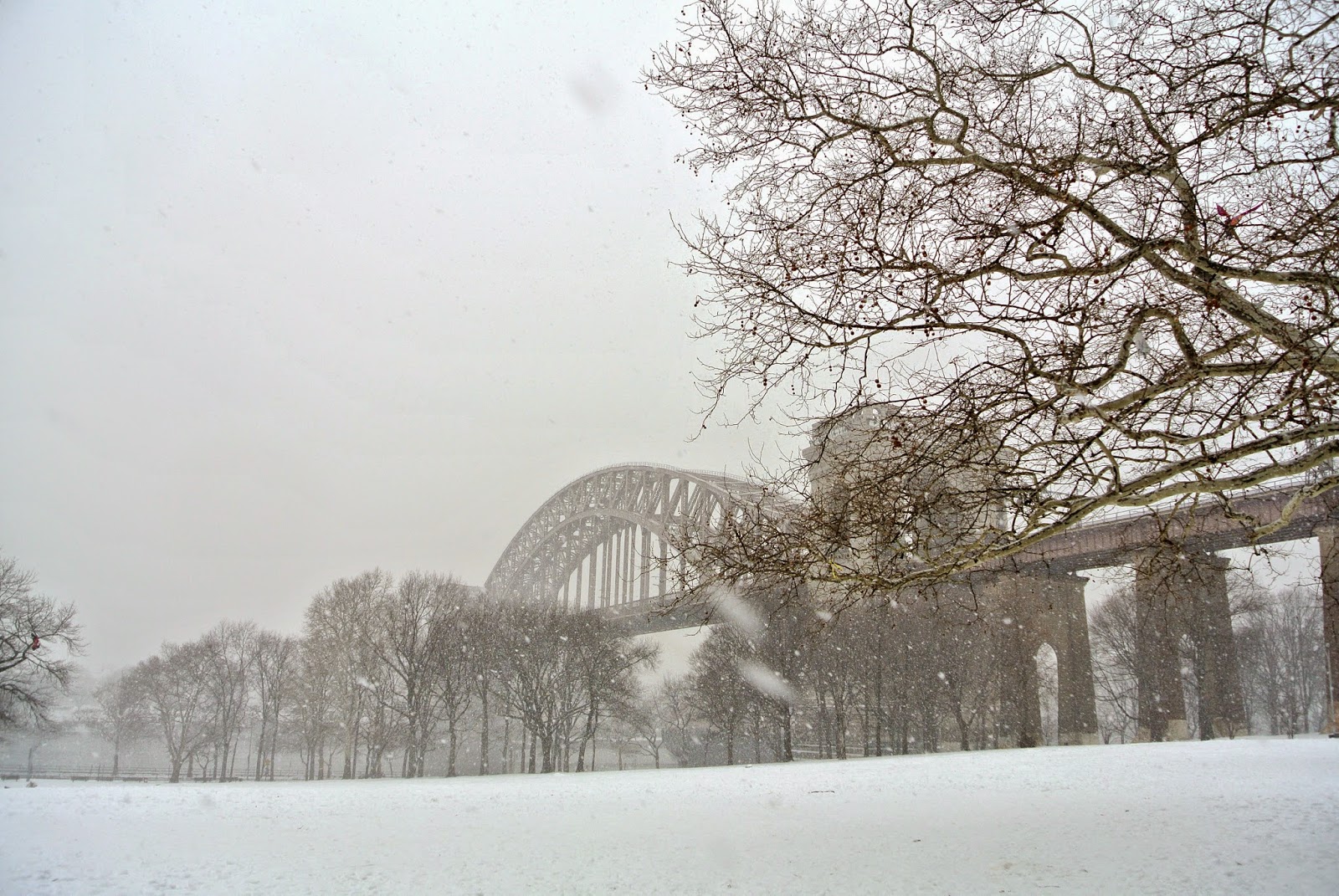 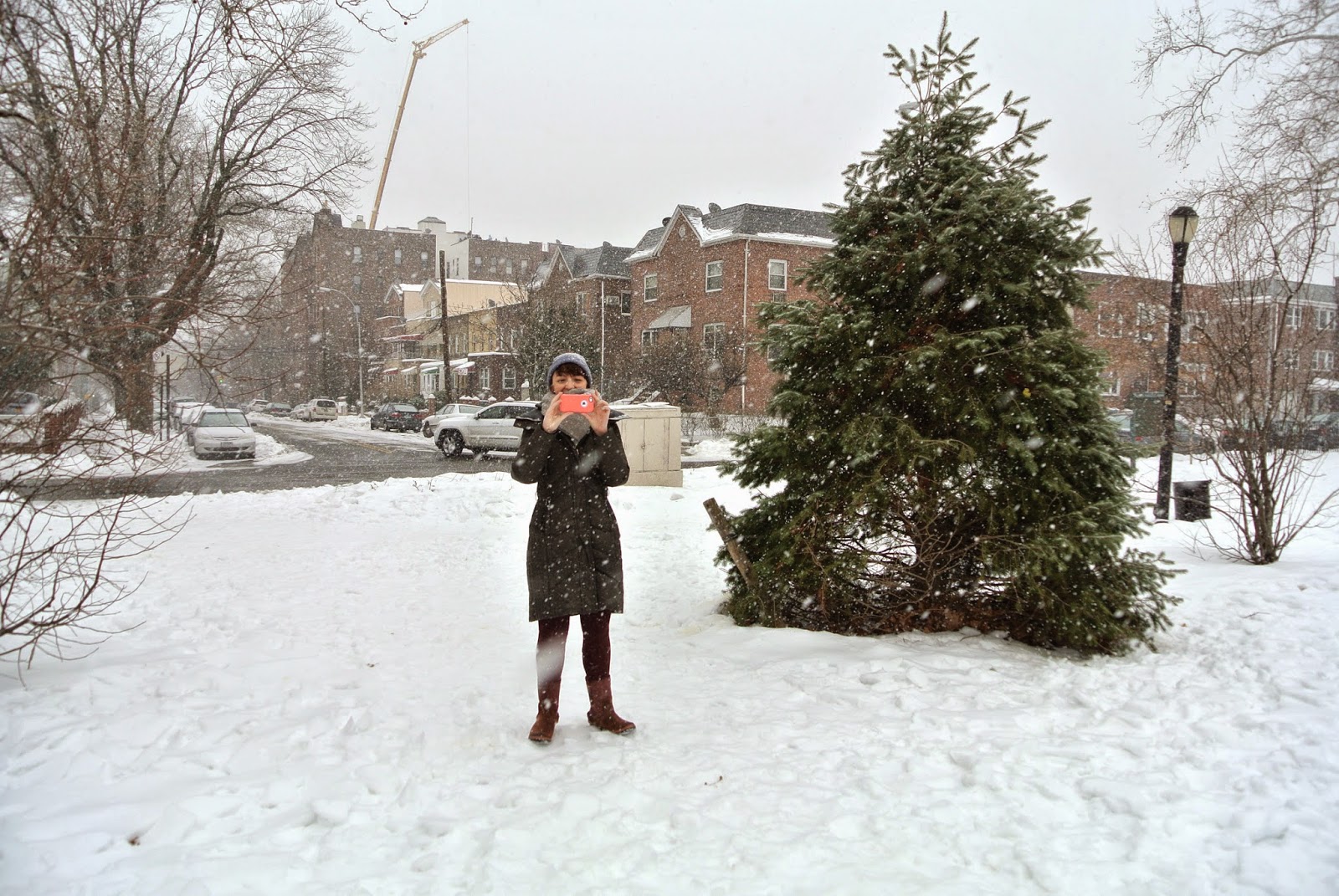 Tiptoeing our way around the icy sidewalks, we eventually make our way to New York City Bagel and Coffee House, right near the Astoria-Ditmars Stop on the N train. I'm stunned by the sheer array of bagel and cream cheese flavors, the latter of which you're allowed to try as if they were ice cream flavors. I'm happily shocked upon hearing this. "I can TRY them????" I say in disbelief, eyeing first the wasabi cream cheese but ultimately settling on the bacon scallion for my multi-grain, whole wheat bagel. It's delicious, but I cannot finish it and give the rest to J.

Walking back to her house, she points out a pet store. "This is where I like to go to pet other people's animals," she laughs. We go inside and pay a visit to a spunky Boston terrier in the window and a fluffy, brown tabby perched high above the shelves of dog food. I never really understood dog sweaters but this place is full of them, along with yardsticks of duck jerky for dogs. To each his own. As we tiptoe over the ice yet again, J mourns the lack of Mexican food in her neighborhood, prompting her to read to me from her phone the hilarious essay by Darin Ross, "Dear Guy Who Just Made My Burrito," from Medium (which I encourage you all to read if you haven't already!). We laugh loud laughs while I try not to fall on my face in the snow. At one point I laugh so hard I almost spit out my tea.

As J drives me over the Triboro Bridge, I already feel that same part of me getting left behind. What's nice though is that, no matter how much time passes, I know now I can always get it back.
Posted by miss-manhattan at 11:23 PM No comments: