If you get off the 6 train at 42nd Street, you will find yourself inside Grand Central Station. Actually, you’ll find yourself in Grand Central Terminal because that’s the building’s correct name. Either way, however, you’ll be in the largest train station in the world by sheer number of platforms (44, with 67 tracks along them).
To be in Grand Central is really quite humbling. Brilliantly bulbed chandeliers dot the Main Concourse, into which the tallest windows pour endless natural light. The ceiling is a turquoise and yellow sky, complete with lighted constellations of Orion, Leo, and what have you. Soft yellow, almost tan, light fills the palatial station, giving everything in it a similar hue. Two massive staircases at either end of the main concourse lead to a fine restaurant and to the Campbell Apartment, which was once the office of 1920s millionaire financier John W. Campbell but is now a cocktail lounge. Under the main concourse is the dining concourse, like a food court, saddled on one side by the famous Oyster Bar. There are also numerous stores, ATMs, and the like, making Grand Central a small city in and of itself.
Being in Grand Central is like walking through history. I imagine the building is flooded with ghosts, of men in their grey flannel suits walking through the station to work in the 1950s, women clutching hats and gloves as they rush, ladylike, to the trains. Traveling by rail in general evokes another era, when people perhaps preferred trains to airplanes (though trains have always been more reliable). People still rush to catch trains, but the glamour of it is lost on people, I think. I mean, not everyone is Miss Noxzema Jackson in To Wong Foo, Thanks For Everything, Julie Newmar, begging to know “Does it have a club car? Ooooh tell me, tell me, tell me does it haaaave a club car?” But somehow by looking at this building, we’re allowed to think what this club car might be or have been like.
Grand Central Terminal was originally called Grand Central Depot, and rose in 1871 after railroad baron Cornelius Vanderbilt acquired the New York Central Line. Because of a train accident that killed 17 people, the depot was renovated and redesigned by architects Reed & Stern and Warren & Wetmore beginning in 1903 and ending in 1913. For over 40 years, Grand Central remained as it was in 1913, but when the building began to crumble in the mid-50s, it was almost torn down. Thankfully, the site was named a national landmark in the 1960s; it was then rejuvenated a second time and appears as it is today.
The first time I was in Grand Central long enough to appreciate it was in early fall, but I finally got a chance to go back and take some pictures. Have a look, but really try to check it out for yourself someday. 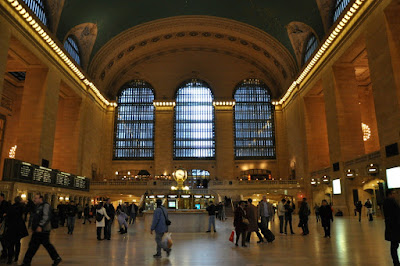 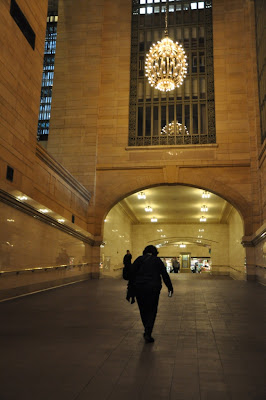 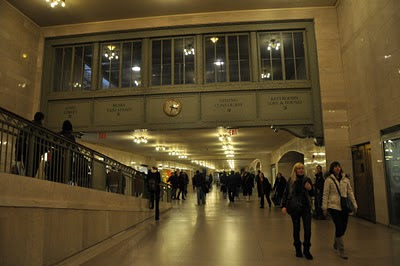 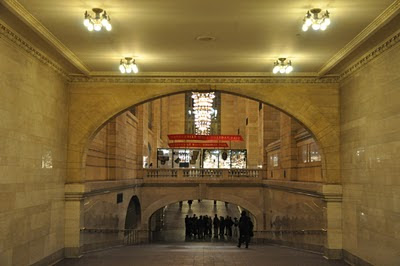 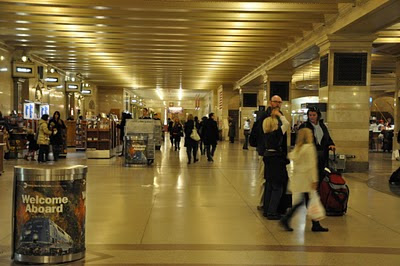 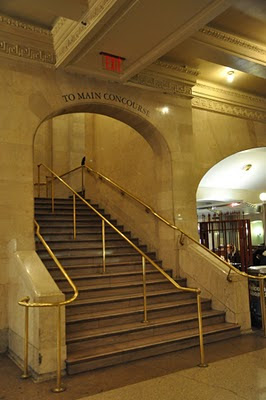 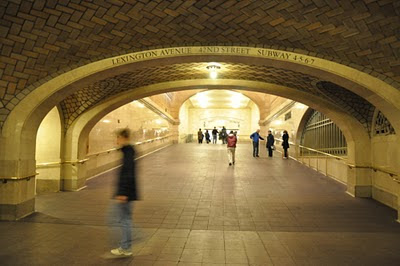 Posted by miss-manhattan at 12:10 AM No comments: